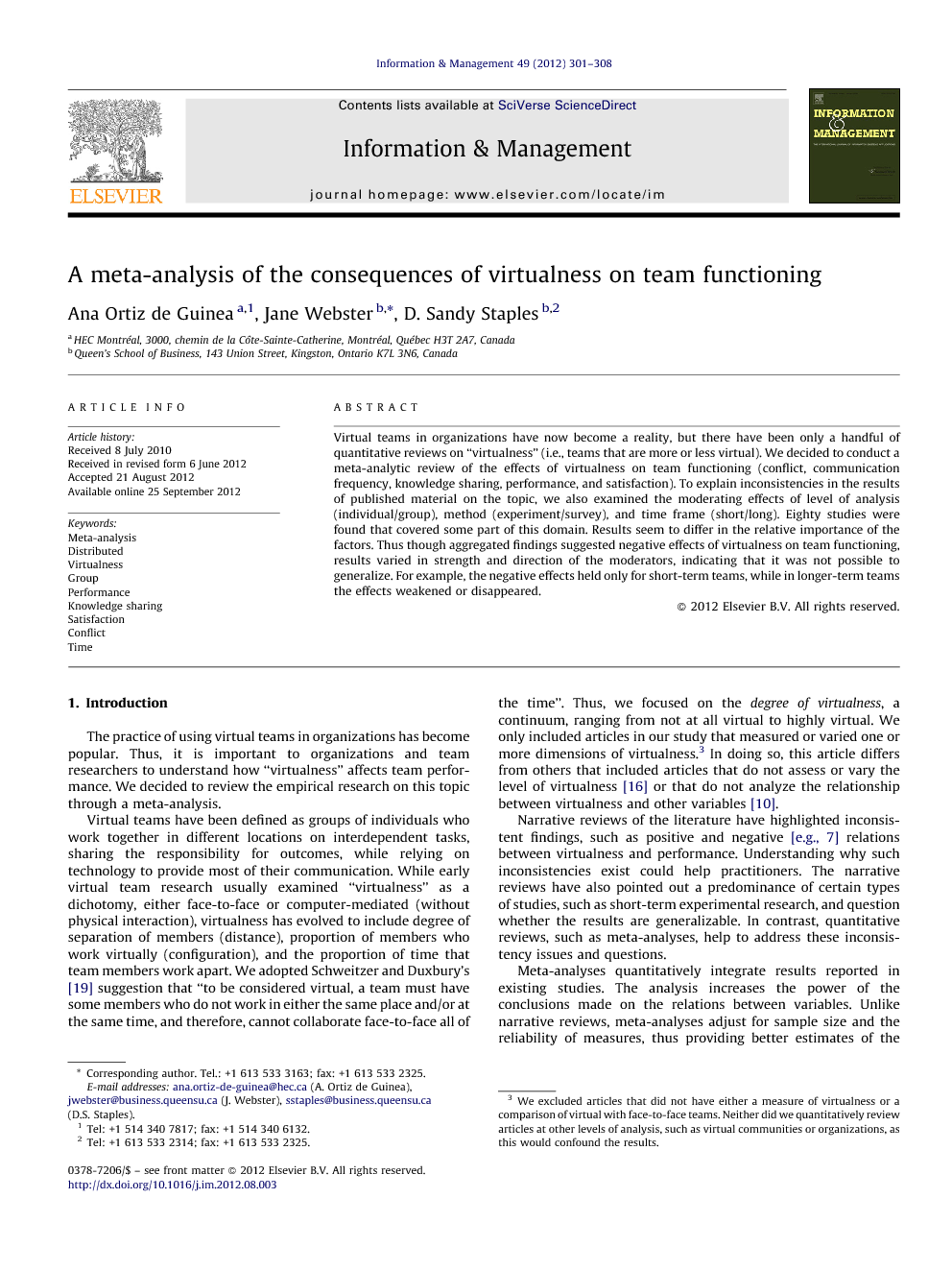 Virtual teams in organizations have now become a reality, but there have been only a handful of quantitative reviews on “virtualness” (i.e., teams that are more or less virtual). We decided to conduct a meta-analytic review of the effects of virtualness on team functioning (conflict, communication frequency, knowledge sharing, performance, and satisfaction). To explain inconsistencies in the results of published material on the topic, we also examined the moderating effects of level of analysis (individual/group), method (experiment/survey), and time frame (short/long). Eighty studies were found that covered some part of this domain. Results seem to differ in the relative importance of the factors. Thus though aggregated findings suggested negative effects of virtualness on team functioning, results varied in strength and direction of the moderators, indicating that it was not possible to generalize. For example, the negative effects held only for short-term teams, while in longer-term teams the effects weakened or disappeared.

The practice of using virtual teams in organizations has become popular. Thus, it is important to organizations and team researchers to understand how “virtualness” affects team performance. We decided to review the empirical research on this topic through a meta-analysis. Virtual teams have been defined as groups of individuals who work together in different locations on interdependent tasks, sharing the responsibility for outcomes, while relying on technology to provide most of their communication. While early virtual team research usually examined “virtualness” as a dichotomy, either face-to-face or computer-mediated (without physical interaction), virtualness has evolved to include degree of separation of members (distance), proportion of members who work virtually (configuration), and the proportion of time that team members work apart. We adopted Schweitzer and Duxbury's [19] suggestion that “to be considered virtual, a team must have some members who do not work in either the same place and/or at the same time, and therefore, cannot collaborate face-to-face all of the time”. Thus, we focused on the degree of virtualness, a continuum, ranging from not at all virtual to highly virtual. We only included articles in our study that measured or varied one or more dimensions of virtualness.3 In doing so, this article differs from others that included articles that do not assess or vary the level of virtualness [16] or that do not analyze the relationship between virtualness and other variables [10]. Narrative reviews of the literature have highlighted inconsistent findings, such as positive and negative [e.g., 7] relations between virtualness and performance. Understanding why such inconsistencies exist could help practitioners. The narrative reviews have also pointed out a predominance of certain types of studies, such as short-term experimental research, and question whether the results are generalizable. In contrast, quantitative reviews, such as meta-analyses, help to address these inconsistency issues and questions. Meta-analyses quantitatively integrate results reported in existing studies. The analysis increases the power of the conclusions made on the relations between variables. Unlike narrative reviews, meta-analyses adjust for sample size and the reliability of measures, thus providing better estimates of the relations between variables. They also allow for the discovery of moderators through the coding of differences between studies. Thus, progress in theory building and cumulative knowledge is achievable with meta-analysis. The objectives of our meta-analysis were to: (1) examine the extent to which virtual teams research has built cumulative knowledge, (2) quantify the strength of the relationships between virtualness and team processes and outcomes, and (3) explore reasons for contradictory findings.

Our meta-analytic review demonstrated that not all virtualness measures are the same and that some conflicting results are due to this and other moderator variables (such as study method). As a result, this study highlights and helps explain conflicting results, and points to empirical gaps in our knowledge and the necessity to inform practice by building a cumulative body of research in which variables are systematically investigated. The results of our meta-analysis suggest that team processes and outputs are negatively influenced by virtualness. However, these results do not generalize to all types of teams and analytical approaches. The moderation analysis indicates that virtualness has a different influence on team functioning depending on how it is measured as well as on the length of time the team works together. The negative effects found in short-term teams weaken or disappear in teams that have longer lives. Our results also point to important differences on the effects of virtualness for different levels of analysis (individual vs. group) and methods (experiments vs. surveys). We need to know more about how different levels of analysis interact with each other, as well as utilize finer and multidimensional measures of virtualness. All of this can help us understand how to improve team processes and outcomes to more fully take advantage of the potential benefits of virtual work.