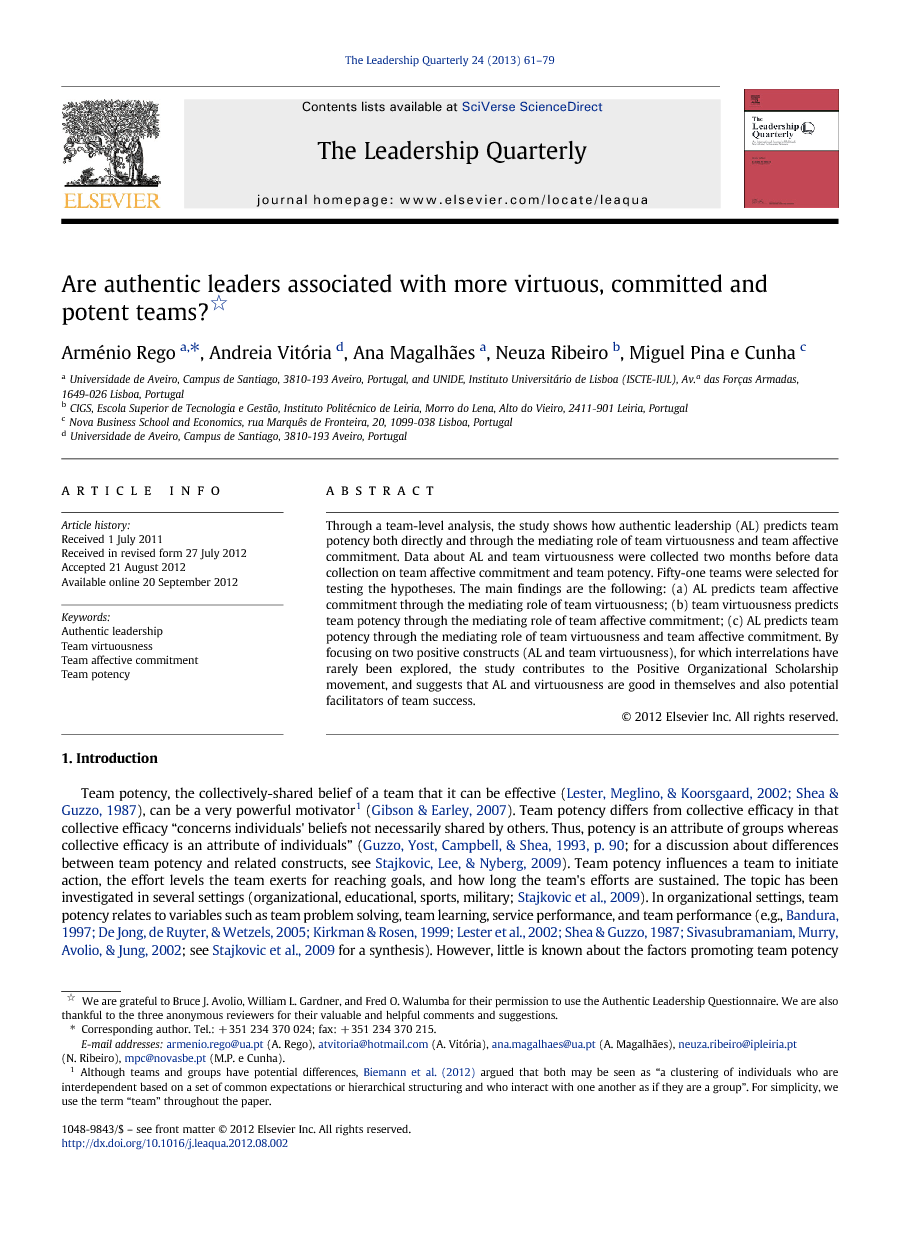 Team potency, the collectively-shared belief of a team that it can be effective (Lester et al., 2002 and Shea and Guzzo, 1987), can be a very powerful motivator1 (Gibson & Earley, 2007). Team potency differs from collective efficacy in that collective efficacy “concerns individuals' beliefs not necessarily shared by others. Thus, potency is an attribute of groups whereas collective efficacy is an attribute of individuals” (Guzzo, Yost, Campbell, & Shea, 1993, p. 90; for a discussion about differences between team potency and related constructs, see Stajkovic, Lee, & Nyberg, 2009). Team potency influences a team to initiate action, the effort levels the team exerts for reaching goals, and how long the team's efforts are sustained. The topic has been investigated in several settings (organizational, educational, sports, military; Stajkovic et al., 2009). In organizational settings, team potency relates to variables such as team problem solving, team learning, service performance, and team performance (e.g., Bandura, 1997, De Jong et al., 2005, Kirkman and Rosen, 1999, Lester et al., 2002, Shea and Guzzo, 1987 and Sivasubramaniam et al., 2002; see Stajkovic et al., 2009 for a synthesis). However, little is known about the factors promoting team potency (Gibson and Earley, 2007 and Lester et al., 2002). Guzzo et al. (1993) suggested that leadership is a key determinant of team potency, but empirical studies are scarce (Howell & Shea, 2006). In this paper we focus on authentic leadership (AL) as predictor of team potency. The apparent degradation in the quality of the “overall moral fabric of contemporary leadership” (Avolio & Mhatre, 2012) creates a need for new theories that, like AL, focus on promoting what is right rather than focusing only on “results at whatever cost” to the exclusion of ethical considerations. Followers', teams', and organizations' effectiveness must be promoted via authentic leadership behaviors that also help to restore trust in leaders and organizations (Avolio and Mhatre, 2012 and George, 2003). In times of a crisis of confidence (Avolio and Mhatre, 2012 and George, 2003), studying and promoting AL is crucial for developing confidence in leaders and promoting “pragmatic outcomes” (Cameron, Bright, & Caza, 2004, p. 770). Considering the impact of team potency on team performance (Stajkovic et al., 2009), team potency may be considered to be a “pragmatic outcome” of AL, as we discuss below. AL is a subject of growing interest among scholars (e.g., Avolio and Gardner, 2005, Walumbwa et al., 2008 and Walumbwa et al., 2011) and practitioners (e.g., George, 2003). Both argue that AL promotes positive attitudes and behaviors of employees and contributes to individual and organizational/team performance. More empirical research is necessary for further testing this assertion. Although several empirical studies have been conducted for predicting individual level outcomes (Rego et al., 2012a, Walumbwa et al., 2010 and Walumbwa et al., 2008), studies are scarcer in predicting team level outcomes (Walumbwa et al., 2011). In consonance with Avolio, Gardner, Walumbwa, Luthans, and May, 2004, we consider that AL, although important, is not sufficient to achieve positive team outcomes. There is a process linking AL to team potency, and we suggest that team virtuousness and team affective commitment may be part of that process. We hypothesize that AL nurtures team virtuousness, which in turn promotes team affective commitment (Avolio, Gardner, Walumbwa, Luthans and May, 2004, Rego et al., 2010 and Rego et al., 2011) and, in this way, team potency. Both team commitment and team virtuousness are potential mediators, with research suggesting that both predict team performance (Neininger et al., 2010 and Palanski et al., 2011). Team commitment is analogous to organizational commitment, except that the target of the psychological attachment is the team, not the organization. There is reason to believe that team commitment contributes more to the prediction of team-related criteria such as team potency than does organizational commitment (Den Hartog & Belschak, 2007; Fishbein & Ajzen, 1975; Riketta & Van Dick, 2005). AL may encourage team affective commitment through the mediating role of team virtuousness (Avolio, Gardner, Walumbwa, Luthans, & May, 2004). Team virtuousness refers to team contexts where “good” habits, desires, and actions (e.g., humanity, integrity, forgiveness, and trust) are practiced, supported, nourished, disseminated, and sustained, at both the individual and collective levels (Cameron et al., 2004). The topic has been “out of favor in the scientific community” (Cameron et al., 2004, p. 767) and out of the focus of practitioner attention (Rego et al., 2010). A few empirical studies have been conducted (Bright et al., 2006, Cameron et al., 2004, Rego et al., 2010 and Rego et al., 2011), but to our knowledge none has focused on both AL and team virtuousness. This is surprising considering that both are core elements of Positive Organizational Scholarship (Cameron & Spreitzer, 2012). More empirical research is necessary for “legitimizing” them in both the scholars' and practitioners' communities (Cameron & Winn, 2012). We hypothesize that AL fosters virtuous team climates, leading team members to share common positive perceptions about how virtuous the team is, which in turn increases team affective commitment and, in this way, makes the team more potent. For example, because authentic leaders set high standards for moral and ethical behavior, they nurture honesty, integrity, and trust within the team, developing positive/upward spirals within the team, making it more virtuous. Team virtuousness, in turn, creates team affective commitment (Rego et al., 2011), leading the whole team to feel more potent. Such effects may occur because, for example, team members develop meaning at work and gratitude for working in a virtuous team (Emmons & Shelton, 2001). As a consequence, they reciprocate with greater team affective commitment (Coyle-Shapiro, 2002 and Eisenberger et al., 2001). Through positive behavioral interactions within the team (Ilies, Morgeson, & Nahrgang, 2005), affective commitment translates into upward/positive collective spirals that make the team more potent.