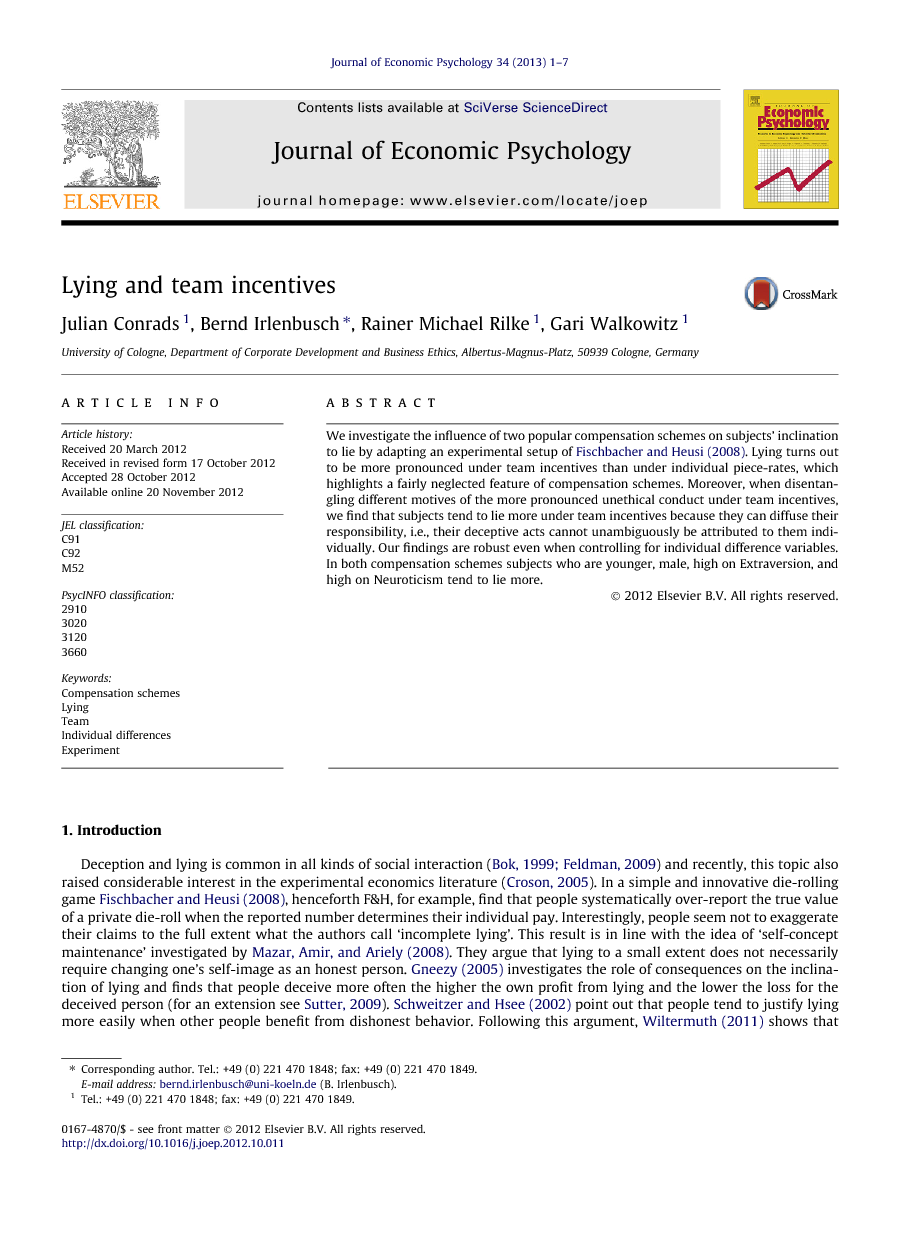 We investigate the influence of two popular compensation schemes on subjects’ inclination to lie by adapting an experimental setup of Fischbacher and Heusi (2008). Lying turns out to be more pronounced under team incentives than under individual piece-rates, which highlights a fairly neglected feature of compensation schemes. Moreover, when disentangling different motives of the more pronounced unethical conduct under team incentives, we find that subjects tend to lie more under team incentives because they can diffuse their responsibility, i.e., their deceptive acts cannot unambiguously be attributed to them individually. Our findings are robust even when controlling for individual difference variables. In both compensation schemes subjects who are younger, male, high on Extraversion, and high on Neuroticism tend to lie more.

Deception and lying is common in all kinds of social interaction (Bok, 1999 and Feldman, 2009) and recently, this topic also raised considerable interest in the experimental economics literature (Croson, 2005). In a simple and innovative die-rolling game Fischbacher and Heusi (2008), henceforth F&H, for example, find that people systematically over-report the true value of a private die-roll when the reported number determines their individual pay. Interestingly, people seem not to exaggerate their claims to the full extent what the authors call ‘incomplete lying’. This result is in line with the idea of ‘self-concept maintenance’ investigated by Mazar, Amir, and Ariely (2008). They argue that lying to a small extent does not necessarily require changing one’s self-image as an honest person. Gneezy (2005) investigates the role of consequences on the inclination of lying and finds that people deceive more often the higher the own profit from lying and the lower the loss for the deceived person (for an extension see Sutter, 2009). Schweitzer and Hsee (2002) point out that people tend to justify lying more easily when other people benefit from dishonest behavior. Following this argument, Wiltermuth (2011) shows that people are more likely to cheat when the benefits of doing so are split with another person even if this other person is totally unknown to the cheater. In a similar vain, Mazar and Aggarwal (2011) demonstrate that individuals who are primed in a collectivist mindset more frequently behave unethically, i.e., offering bribes, as they feel less responsible for their own actions. Thus, deceit also seems to be psychologically easier because of diffusion of responsibility, i.e., the likelihood to deceive increases when individual causal agency for unethical behavior is obscured (Bandura, 1991 and Bandura et al., 1996). In this paper we take an organizational perspective and look at the influence of different compensation schemes on deceptive behavior and lying. Such a perspective is also taken by Cadsby, Song, and Tapon (2010) who employ an anagram task and experimentally analyze the differences in cheating under piece-rate, target-based and tournament incentive schemes. They find that lying in terms of overclaimed words is most pronounced under the target-based system as targets seem to encourage people to lie particularly if one is close to the target. By following up on their work in the current study we compare lying behavior under the two probably most commonly observed incentive schemes in organizations, i.e., individual piece-rate compensation and team compensation schemes (Gibbons, 1998 and Lazear and Gibbs, 2009). Ledford, Lawler, and Mohrman (1995) for example show that more than 70% of major US firms use some form of team-based rewards. Using data of a representative survey of German companies Berger, Herbertz, and Sliwka (2010) find that performance-related pay such as piece-rate compensation and team-based variable compensation are widespread. This suggests that the investigation of potential deceptive behavior under these two compensation schemes is important. We use a variant of the die-rolling game of F&H, which in their version resembles an individual piece-rate compensation scheme. We are able to confirm F&H’s findings, i.e., people systematically lie but quite often they are reluctant to do so to the full extent. Our team compensation scheme is modeled as a revenue sharing mechanism (for an earlier experimental study on revenue sharing see Nalbantian & Schotter, 1997). The production outputs of two agents are pooled and each agent receives one half of a compensation unit for each unit of the joint production output. Comparing the marginal incentives to lie under the two schemes reveals that under the team compensation scheme the marginal gain from lying, i.e., the return from exaggerating the own production output by one unit, is only half of the marginal gain from lying under the individual piece-rate scheme. Assuming increasing marginal costs of lying this could lead one to assume that lying should be more pronounced under the individual piece-rate scheme than under the team incentive scheme. On the other hand, in the team incentive scheme lying is not exclusively beneficial for oneself – as it is the case under the individual compensation scheme – but it also benefits the other agent in the team. Thus, an agent under a team incentive scheme might be more able to justify such a white lie to herself compared to a lie under the individual scheme – after all she is doing something ‘good’ for the other team member (see Wiltermuth, 2011). Moreover, lying under the team incentive scheme might be psychologically easier because this compensation scheme promotes diffusion of one’s own responsibility, i.e., tracing lies back to individual team members is more difficult under team compensation compared to individual compensation. Extending upon our two main experimental treatments we additionally run a control treatment in order to explore potential motives of lying behavior under the two compensation schemes. Disentangling different motives behind deceptive actions would shed some light on the effectiveness of intra-organizational arrangements to reduce lying behavior when distinct compensation incentives are present. The discussed lines of reasoning point into different directions whether lying is more severe under an individual than a team incentive scheme. Our experimental results suggest that lying is in fact more pronounced under the team incentives than under the individual piece-rate scheme. We also find diffusion of responsibility to be a stronger driving force for lying in teams than the white lie justification.

We investigate the influence of two widespread compensation schemes on agents’ inclination to lie. By employing a simple experimental design introduced by Fischbacher and Heusi (2008) and controlling for individual difference variables (Female, Age, and Big-Five personality traits) we find that lying is prevalent under both schemes but more pronounced under team incentives than individual piece-rates. This robust finding highlights a so far fairly neglected feature of compensation schemes. It shows that organizations are well advised to be vigilant regarding potentially harming side-effects of compensation schemes, especially when agents can diffuse and displace their responsibility for unethical conduct. Our study shows that besides benefiting others agents working under team incentives might be particularly prone to lying and deception because it is easier to hide individual wrongdoing under a team than an individual compensation scheme which makes it more difficult to pinpoint a liar in a team. Interestingly, this finding on the corruptive effect of a contingent responsibility shift supports an argument raised by Fischbacher and Heusi (2008). In their seminal paper they show that many subjects do not lie to the full extend, i.e., subjects report an outcome of 4 instead of 5 (see also Observation 3). The authors argue that subjects know that honesty might be a favorable trait and if a 4 is assessed differently than a 5 in respect to honesty, it might be reasonable not to lie to the full extent and to try to disguise the lie and appear honest. Similarly, players in our treatment Team and players with team compensation in Team-Mixed might also see lying to be unethical but they are able to diffuse their responsibility.