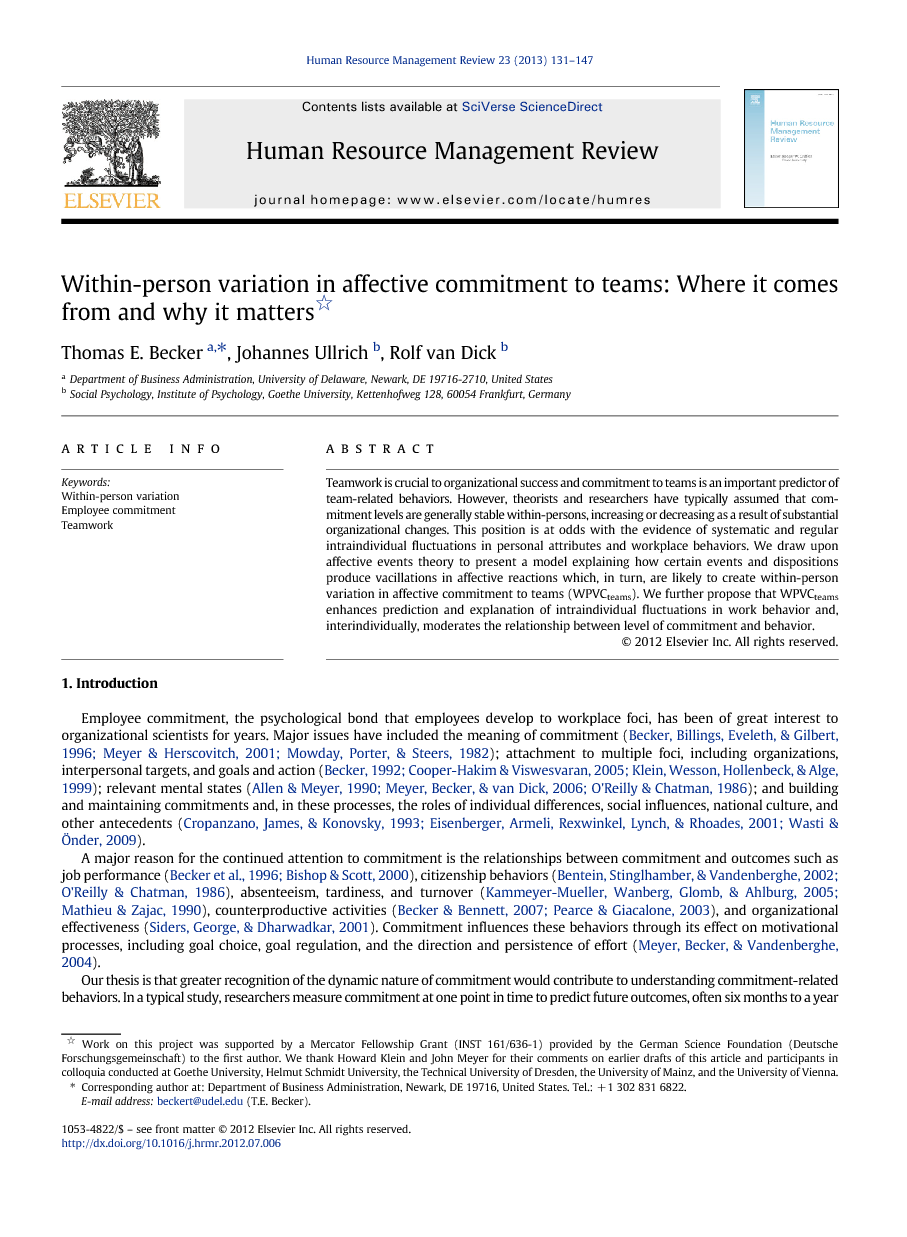 Teamwork is crucial to organizational success and commitment to teams is an important predictor of team-related behaviors. However, theorists and researchers have typically assumed that commitment levels are generally stable within-persons, increasing or decreasing as a result of substantial organizational changes. This position is at odds with the evidence of systematic and regular intraindividual fluctuations in personal attributes and workplace behaviors. We draw upon affective events theory to present a model explaining how certain events and dispositions produce vacillations in affective reactions which, in turn, are likely to create within-person variation in affective commitment to teams (WPVCteams). We further propose that WPVCteams enhances prediction and explanation of intraindividual fluctuations in work behavior and, interindividually, moderates the relationship between level of commitment and behavior.

Employee commitment, the psychological bond that employees develop to workplace foci, has been of great interest to organizational scientists for years. Major issues have included the meaning of commitment (Becker et al., 1996, Meyer and Herscovitch, 2001 and Mowday et al., 1982); attachment to multiple foci, including organizations, interpersonal targets, and goals and action (Becker, 1992, Cooper-Hakim and Viswesvaran, 2005 and Klein et al., 1999); relevant mental states (Allen and Meyer, 1990, Meyer et al., 2006 and O'Reilly and Chatman, 1986); and building and maintaining commitments and, in these processes, the roles of individual differences, social influences, national culture, and other antecedents (Cropanzano et al., 1993, Eisenberger et al., 2001 and Wasti and Önder, 2009). A major reason for the continued attention to commitment is the relationships between commitment and outcomes such as job performance (Becker et al., 1996 and Bishop and Scott, 2000), citizenship behaviors (Bentein et al., 2002 and O'Reilly and Chatman, 1986), absenteeism, tardiness, and turnover (Kammeyer-Mueller et al., 2005 and Mathieu and Zajac, 1990), counterproductive activities (Becker and Bennett, 2007 and Pearce and Giacalone, 2003), and organizational effectiveness (Siders, George, & Dharwadkar, 2001). Commitment influences these behaviors through its effect on motivational processes, including goal choice, goal regulation, and the direction and persistence of effort (Meyer, Becker, & Vandenberghe, 2004). Our thesis is that greater recognition of the dynamic nature of commitment would contribute to understanding commitment-related behaviors. In a typical study, researchers measure commitment at one point in time to predict future outcomes, often six months to a year later (Jaros, 2009). This is consistent with the standard conceptualization of commitment as a fairly stable bond, changing as a result of profound external events such as mergers and layoffs, and changing in a similar manner and to a similar degree across employees (Gopinath and Becker, 2000, Meyer and Allen, 1997 and Vandenberg and Stanley, 2009). If commitment is less stable, changing as a result of internal and external events, some pronounced and some subtle, with differential patterns of change across employees, then the standard assumptions limit prediction and explanation of behavior. To address this limitation, we introduce the concept of within-person variation in commitment (WPVC) to direct research attention toward intraindividual changes in commitment and the possibility of interindividual differences in such variation. In subsequent discussion, for ease of exposition we limit our focus in two ways. First, compared to other commitment mindsets, affective commitment – employees' emotional connection with workplace foci – has the strongest, most consistent ties to other variables of interest (Meyer, Stanley, Herscovitch, & Topolnytsky, 2002). Further, while we will argue that relevant within-person variation in affective commitment is likely, this may be less true for normative and continuance commitments. Cohen (2007) suggested that normative commitment is largely the result of early socialization and stable beliefs about work ethic and loyalty. If this is true then one would not predict a great deal of fluctuation in this form of commitment. Continuance commitment has not by itself demonstrated consistent relationships with outcomes of interest and so is less relevant for our purposes. Therefore, we will concentrate on affective commitment throughout our discussions. Second, in illustrating and discussing our propositions, we will concentrate mainly, though not exclusively, on affective commitment to teams. Commitment to teams is likely to fluctuate more, and more often, than commitment to distal foci because change often happens at the level of teams (Hackman, 1992, Salas et al., 2009 and Thompson, 2004) and because teams have a particularly powerful influence on members (Moreland and Levine, 2001, Mueller and Lawler, 1999 and Van Knippenberg and Van Schie, 2000). This influence appears to be driven by the salience, vividness, and proximity of teams relative to other foci (Riketta & van Dick, 2005) and probably explains why commitment to teams is a unique predictor of team-related behaviors, including intent to leave the team, citizenship behaviors directed toward the team, working overtime, and team performance (Becker, 2009, Bishop and Scott, 2000 and Ellemers et al., 1998). Better understanding affective commitment to teams should help us more adequately explain and predict these important behaviors. As an aside, some have argued that affective commitment is largely indistinguishable from job satisfaction (Le, Schmidt, Harter, & Lauver, 2010). It is true that popular commitment and satisfaction measures are highly correlated but this, in itself, does not mean that the concepts are essentially the same. It is beyond the scope of this paper to resolve the long-standing debate regarding possible redundancy between commitment and satisfaction, but we note that if the concepts are largely redundant then at least some of our propositions apply to satisfaction as well as commitment. For the remainder of our discussions we will assume that affective commitment is a meaningful concept in its own right. In the sections to follow, we explicate the concept of WPVC, explaining its nature, antecedents, and consequences.

We have argued that within-person variation in affective commitment to teams exists and that it has important implications for understanding commitment and its relations with work behaviors. This is generally supported by research demonstrating that personal attributes, including personality traits, emotions, attitudes, and goals vary intraindividually, and that the amount of variation differs among individuals. Further, there are indications from multiple literatures that within-person variation interacts with the level of the corresponding attribute in affecting behavior. Extending this notion, we argue that within-person variation moderates the between-person effects of commitment on behavior such that those who vary less will be more predictable than those who vary more. In terms of underlying processes, we have drawn on affective events theory to offer specific propositions regarding the environments, events, and affective reactions influencing WPVCteams. In addition to the propositions regarding the nature of WPVCteams and its status as a moderator of commitment level and behavior in teams, the major contributions of our model are the identification and illustration of the kinds of environments, events, and dispositions that may influence WPVCteams. At a meta-theoretical level, we urge researchers to utilize multiple levels of analysis because between-person statistics from cross-sectional studies do not allow for inferences about within-person relationships (cf. Borsboom, Mellenbergh, & van Heerden, 2003). We assert that the integration of within-person and between-person levels of analysis is likely to be most rewarding for commitment researchers. For instance, antecedents of WPVCteams differentiate employees for whom relationships between affective commitment to teams and corresponding behaviors are robust and those for whom these relationships are unreliable. For example, interindividually, affective commitment to teams is unlikely to strongly affect citizenship behavior in teams composed of highly moody individuals because unstable moods produce high variation in commitment. That is, people high in WPVCteams may on average exhibit the same amount of citizenship behavior as those lower in WPVCteams. However, at the intraindividual level, variation in commitment could still affect extra-role behavior in that a given person's behavior rises and falls as a function of changes in his or her commitment. A lack of predictive validity at one level need not mean a similar lack at a different level. Another implication is that prior work on commitment to teams (and possibly other foci) may have underestimated commitment effects because samples included high WPVC individuals. That is, variance in dependent variables attributed to commitment level did not include variance explained by the moderating effect of WPVC. Research is needed to determine not only whether the proposed interaction exists but also the nature and effects of distributions of WPVC in different populations. In conclusion, we propose that individual differences in within-person variation in commitment are phenomena worthy of serious study by commitment researchers. It now seems naïve to assume that all employees' commitments vary in the same way and to the same degree. We hope that, at the very least, we have made the case that this assumption should be carefully examined. More than ever, employee commitment is crucial to individual and organizational effectiveness (Meyer, 2009), and understanding WPVC is likely to serve both science and practice.