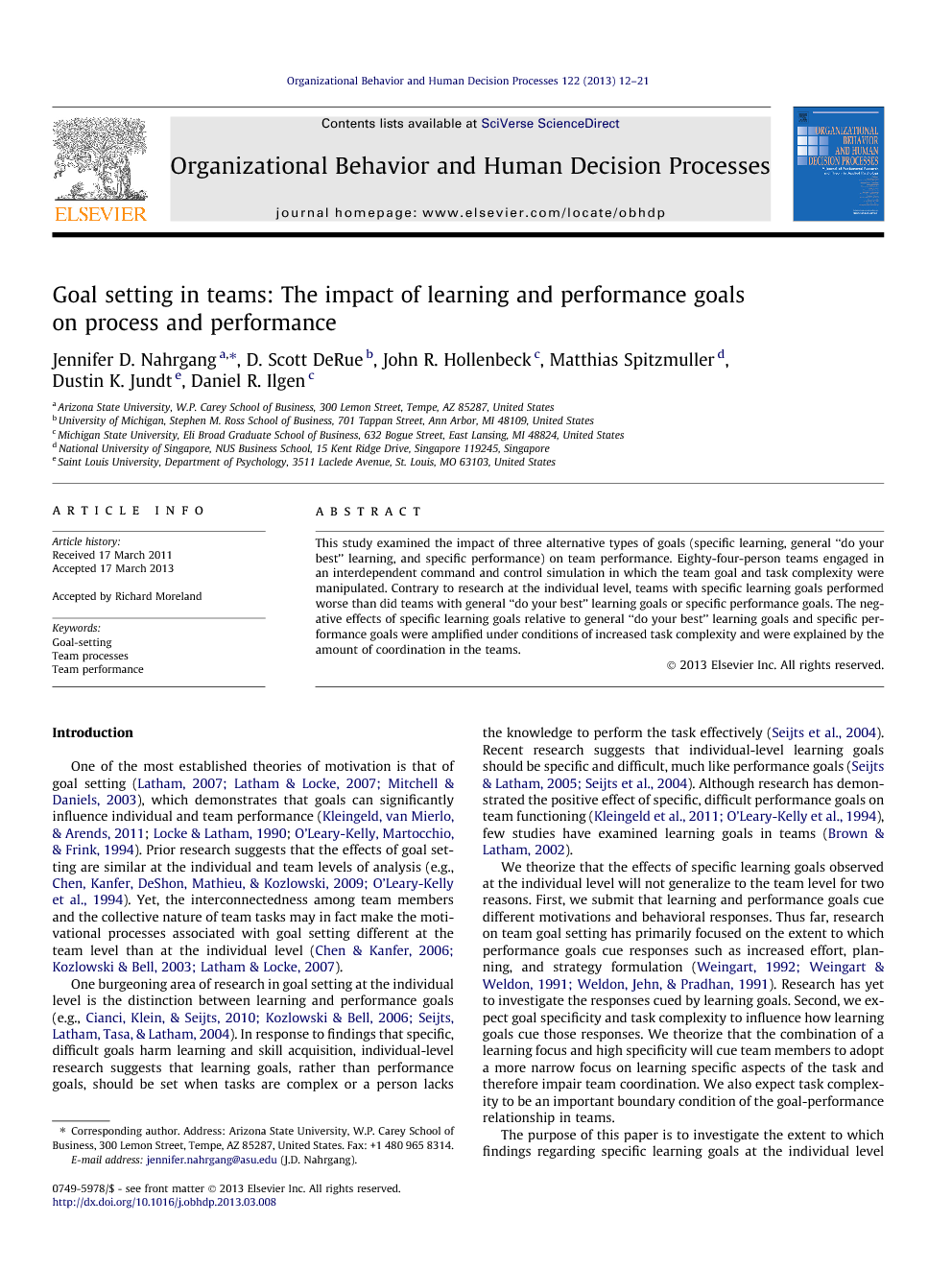 One of the most established theories of motivation is that of goal setting (Latham, 2007, Latham and Locke, 2007 and Mitchell and Daniels, 2003), which demonstrates that goals can significantly influence individual and team performance (Kleingeld, van Mierlo, & Arends, 2011; Locke & Latham, 1990; O’Leary-Kelly, Martocchio, & Frink, 1994). Prior research suggests that the effects of goal setting are similar at the individual and team levels of analysis (e.g., Chen et al., 2009 and O’Leary-Kelly et al., 1994). Yet, the interconnectedness among team members and the collective nature of team tasks may in fact make the motivational processes associated with goal setting different at the team level than at the individual level (Chen and Kanfer, 2006, Kozlowski and Bell, 2003 and Latham and Locke, 2007). One burgeoning area of research in goal setting at the individual level is the distinction between learning and performance goals (e.g., Cianci et al., 2010, Kozlowski and Bell, 2006 and Seijts et al., 2004). In response to findings that specific, difficult goals harm learning and skill acquisition, individual-level research suggests that learning goals, rather than performance goals, should be set when tasks are complex or a person lacks the knowledge to perform the task effectively (Seijts et al., 2004). Recent research suggests that individual-level learning goals should be specific and difficult, much like performance goals (Seijts and Latham, 2005 and Seijts et al., 2004). Although research has demonstrated the positive effect of specific, difficult performance goals on team functioning (Kleingeld et al., 2011 and O’Leary-Kelly et al., 1994), few studies have examined learning goals in teams (Brown & Latham, 2002). We theorize that the effects of specific learning goals observed at the individual level will not generalize to the team level for two reasons. First, we submit that learning and performance goals cue different motivations and behavioral responses. Thus far, research on team goal setting has primarily focused on the extent to which performance goals cue responses such as increased effort, planning, and strategy formulation (Weingart, 1992, Weingart and Weldon, 1991 and Weldon et al., 1991). Research has yet to investigate the responses cued by learning goals. Second, we expect goal specificity and task complexity to influence how learning goals cue those responses. We theorize that the combination of a learning focus and high specificity will cue team members to adopt a more narrow focus on learning specific aspects of the task and therefore impair team coordination. We also expect task complexity to be an important boundary condition of the goal-performance relationship in teams. The purpose of this paper is to investigate the extent to which findings regarding specific learning goals at the individual level (Seijts et al., 2004) generalize to the team level, and to understand the mechanism through which goal type (learning, performance) and specificity influence team performance. We propose that specific learning goals are less effective in team contexts than general “do your best” learning goals and specific performance goals, and that these differential effects operate through the process of team coordination. Finally, we expect these differential effects to be further amplified on complex tasks, resulting in a first-stage mediated moderation model (Edwards & Lambert, 2007).