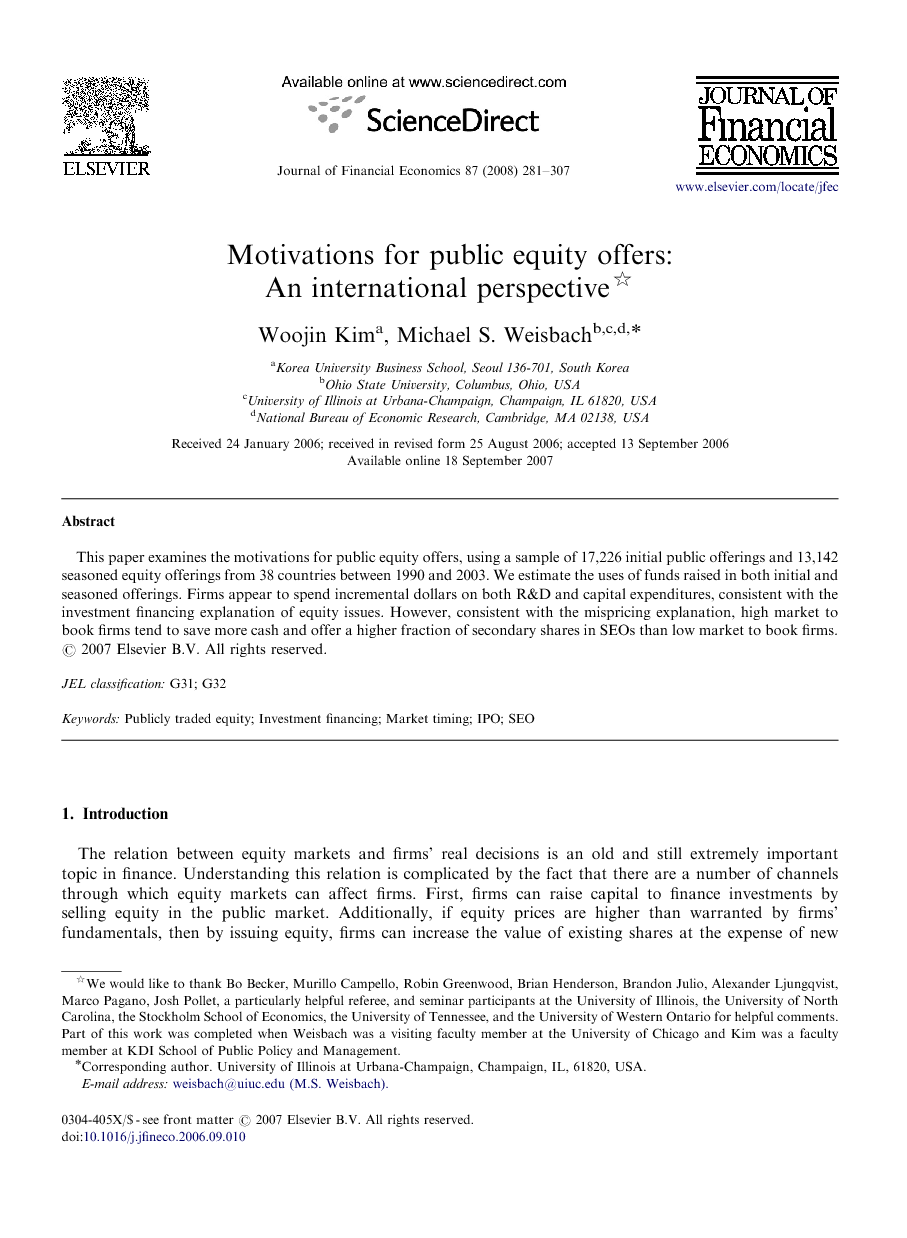 This paper examines the motivations for public equity offers, using a sample of 17,226 initial public offerings and 13,142 seasoned equity offerings from 38 countries between 1990 and 2003. We estimate the uses of funds raised in both initial and seasoned offerings. Firms appear to spend incremental dollars on both R&D and capital expenditures, consistent with the investment financing explanation of equity issues. However, consistent with the mispricing explanation, high market to book firms tend to save more cash and offer a higher fraction of secondary shares in SEOs than low market to book firms.

Public equity offerings are among the most visible and most studied events in finance. Yet, the basic question of why firms issue publicly traded equity has received relatively little attention in the empirical literature. We provide some evidence on this question using a sample of 17,226 IPOs and 13,142 SEOs from 38 countries. In particular, we estimate the actual uses of the funds raised in both initial and seasoned offers. In doing so, we incorporate only primary shares and exclude secondary shares sold by initial shareholders. We also consider how a measure of the firms’ overvaluation or undervaluation affects the issuance, both in terms of the type of shares offered and the use of the proceeds. Our results suggest first that equity offers are used to raise investment capital. Specifically, our estimates imply that R&D expenditures increase by 18.5 cents per marginal dollar of capital raised in the first year following an IPO, and by 17.8 cents per marginal dollar raised in the first year following an SEO. These figures increase to 78.0 cents per dollar raised if the changes are computed over the four-year period following IPOs and 64.3 cents for the four-year period following SEOs. These estimated expenditures are substantially, and statistically significantly, larger than the comparable numbers for a marginal dollar of internally generated cash. They also appear to be similar over alternative legal regimes. These results strongly suggest that one motive behind equity offers is to raise capital to finance investment. We also find evidence consistent with the view that some equity offers are made to take advantage of high valuations. A firm is likely to keep much of the money it raises in an equity offer as cash; this fraction is substantially higher when the firm has a high market to book ratio. In contrast, expenditures on investments are higher for low valuation firms than for high valuation firms. This pattern is consistent with equity offers from high valuation firms occurring, at least some of the time, to take advantage of potential overvaluation. In addition, SEOs offered by firms with a high market to book ratio tend to have a higher fraction of secondary shares, suggesting that insiders are taking advantage of the high valuation to sell some of their shares. Overall, these results are consistent with the view that equity offers are used both to finance investment and to exploit a firm's valuation when it is valued very highly by the market. The ability of equity markets to provide financing for firms outside the U.S. and the U.K. has been widely questioned (see La Porta, Lopez-de-Silanes, Shleifer, and Vishny (1997)). Yet in most regions of the world, capital raised in equity offerings, both initial and seasoned, leads to subsequent investment. Not all equity offers, however, appear to be used to finance investment; in some instances, firms issue equity to take advantage of favorable valuations. Measuring the relative importance of each motivation, the extent to which these motivations vary around the world, and the consequent implications for investment efficiency are important topics for future research.