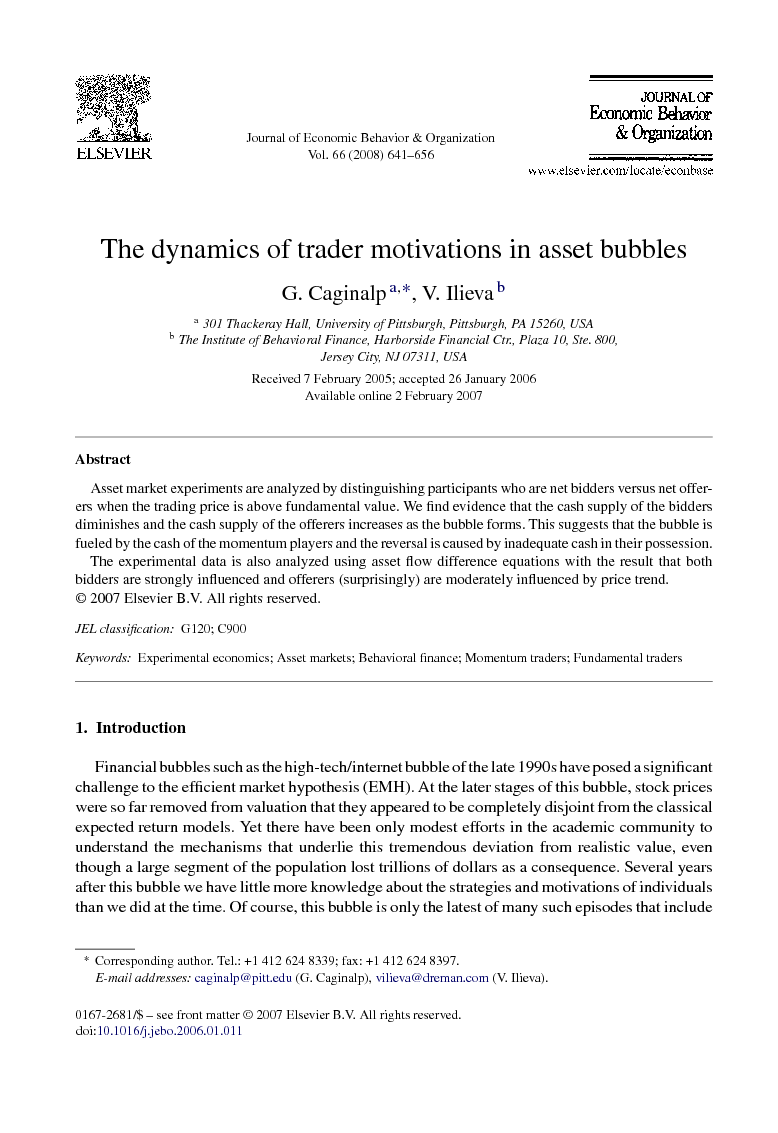 Abstract Asset market experiments are analyzed by distinguishing participants who are net bidders versus net offerers when the trading price is above fundamental value. We find evidence that the cash supply of the bidders diminishes and the cash supply of the offerers increases as the bubble forms. This suggests that the bubble is fueled by the cash of the momentum players and the reversal is caused by inadequate cash in their possession. The experimental data is also analyzed using asset flow difference equations with the result that both bidders are strongly influenced and offerers (surprisingly) are moderately influenced by price trend

Financial bubbles such as the high-tech/internet bubble of the late 1990s have posed a significant challenge to the efficient market hypothesis (EMH). At the later stages of this bubble, stock prices were so far removed from valuation that they appeared to be completely disjoint from the classical expected return models. Yet there have been only modest efforts in the academic community to understand the mechanisms that underlie this tremendous deviation from realistic value, even though a large segment of the population lost trillions of dollars as a consequence. Several years after this bubble we have little more knowledge about the strategies and motivations of individuals than we did at the time. Of course, this bubble is only the latest of many such episodes that include the 1980s bubble of Japanese stocks, the 1920s in US stocks, as well as historical bubbles of previous centuries. The 1990s bubble presented perhaps the biggest surprise in that it occurred at a time when information was so readily available from a variety of sources, thereby eliminating a key hypothesis that incomplete information alone is to blame. Market bubbles have been studied extensively from one perspective, namely, experimental economics (see Davis and Holt, 1993 for a review). Since the 1980s researchers have produced hundreds of bubbles in asset market experiments in which traders can buy or sell an asset through a computer network (see, e.g., Sunder, 1995, Sonnemans et al., 2004 and Hommes et al., 2005). At first, experimenters sought conditions under which a bubble could be created. Surprisingly, bubbles arose without any specific mechanisms to create them. As in the world markets, the initial bubbles results were met with denial, with critics claiming that a number of elements missing in these experiments could account for the large deviations from fundamentals. These included the absence of short selling, margin buying, a futures market, and so on. However, experiments showed that bubbles persisted when any of these were introduced (Porter and Smith, 1994). Only experience as a group tended to reduce the size of the bubble (Smith et al., 1988). Of course, in world markets there are always some newcomers with little or no experience, so this discovery is only limited consolation for EMH. One approach that has provided an explanation for the motivations that underlie bubbles was presented in mathematical models that incorporated a preference function that depended not only on deviation from fundamental value but on the price trend as well (see, e.g. Caginalp and Ermentrout, 1990 and Caginalp and Balenovich, 1999 and references therein). These models incorporated the conservation of cash and asset, and made the predictions that (i) a larger cash supply would result in a larger bubble and (ii) a lower initial price would yield a larger bubble, both contrary to the expectations of EMH. Both of these predictions were confirmed by experiment (Caginalp et al., 2001). These experiments also demonstrated a role, though limited, for the open book, whereby all traders can see the full set of orders, in mitigating the size of the bubble. There are two main advantages in using experiments: (i) conditions can be adjusted and experiments repeated, and (ii) detailed data sets about the actions of particular traders are available. In this work, we utilize the latter feature, as we distinguish the behaviors of different traders and test hypotheses with this information. The first step is to define a criterion for separating traders who trade on fundamentals (net offerers above fundamental value) from those who trade on momentum (net bidders above fundamental value). Some traders who do not fit either criterion are in a third group. We can then test a basic hypothesis that the peak of the bubble occurs when the momentum traders have depleted much of their cash. This hypothesis is confirmed. With the price being far above the actual value at this point, the fundamentalists are not interested in buying, and consequently the trading price drops precipitously. Beyond this result we seek to utilize a discretized version of the differential equations discussed above to evaluate the coefficients related to each of the two groups. In particular, we use the data in terms of cash and asset supply for each trader and the trading prices to see if the coefficients are of the correct sign and statistically significant. If so, it provides a confirmation of the model using two distinct groups. Furthermore, we would like to determine whether the momentum traders are influenced by fundamentals, and vice versa. Also of interest is whether the presence of an open book tends to diminish momentum trading.