عنوان انگلیسی
The fallacy of “only the strong survive”: The effects of extrinsic motivation on the persistence decisions for under-performing firms
دانلود فوری مقاله + سفارش ترجمه 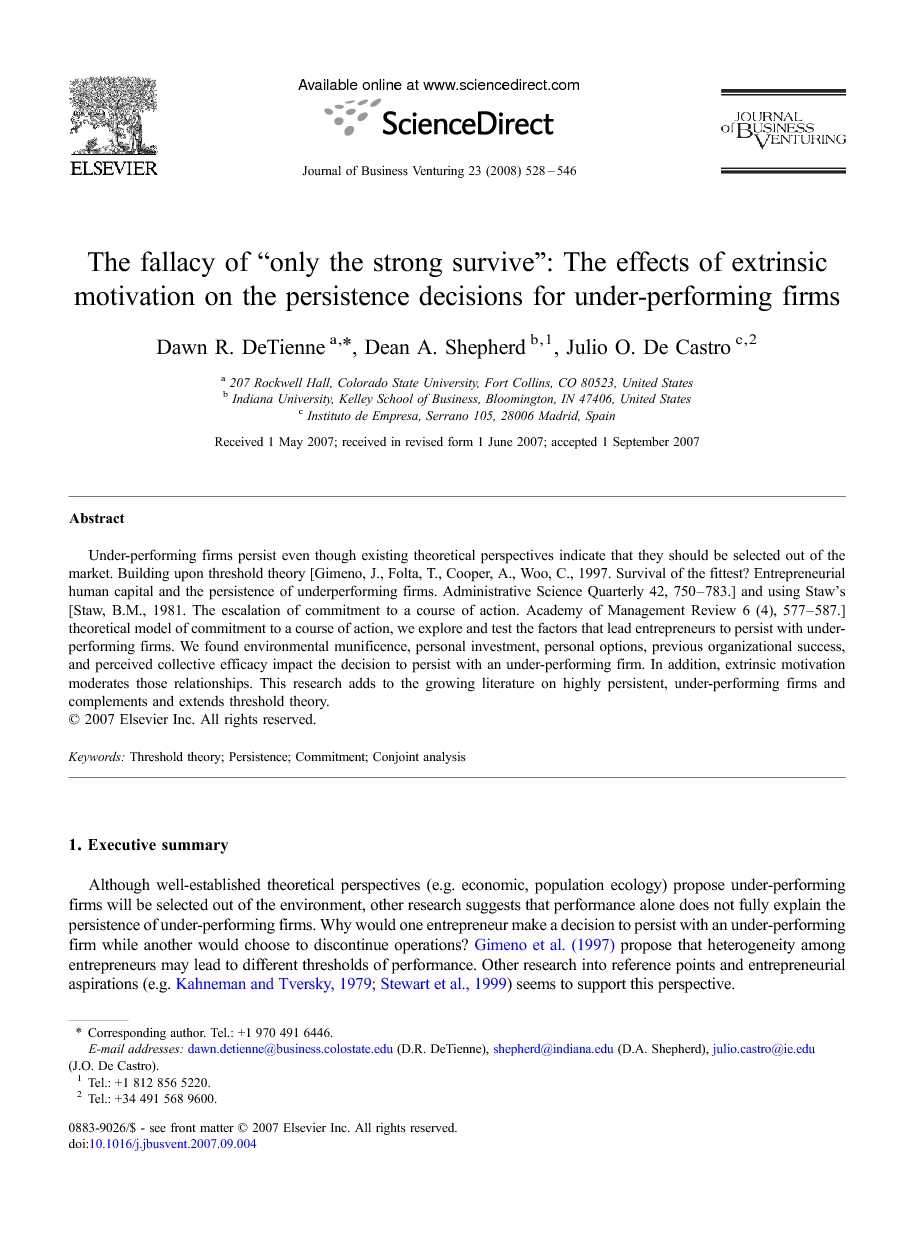 Under-performing firms persist even though existing theoretical perspectives indicate that they should be selected out of the market. Building upon threshold theory [Gimeno, J., Folta, T., Cooper, A., Woo, C., 1997. Survival of the fittest? Entrepreneurial human capital and the persistence of underperforming firms. Administrative Science Quarterly 42, 750–783.] and using Staw's [Staw, B.M., 1981. The escalation of commitment to a course of action. Academy of Management Review 6 (4), 577–587.] theoretical model of commitment to a course of action, we explore and test the factors that lead entrepreneurs to persist with under-performing firms. We found environmental munificence, personal investment, personal options, previous organizational success, and perceived collective efficacy impact the decision to persist with an under-performing firm. In addition, extrinsic motivation moderates those relationships. This research adds to the growing literature on highly persistent, under-performing firms and complements and extends threshold theory.

What explains the persistence of under-performing firms in the market? From a purely economic or population ecology perspective one would expect that these firms would, over time, be selected out of the market. However, previous research (Baden-Fuller, 1989, Gimeno et al., 1997, Karakaya, 2000, Meyer and Zucker, 1989 and van Witteloostuijn, 1998) indicates that firm performance does not fully explain the persistence of under-performing firms. Meyer and Zucker (1989, p. 9) argue that “efficient performance is only one—and not necessarily the most important—determinant of organizational survival.” Under-performing firms often survive over long periods of time, even though they earn a subnormal rate of return. Although there are several perspectives and potential explanations for why these firms persist, our work builds upon that of Gimeno et al. (1997) who found that firms had differing thresholds of performance (reflecting different aspiration levels), which helps explain variance in persistence despite poor performance. Their work suggests that these thresholds differ systematically across firms and can be partially explained by the human capital factors of the owners of such ventures. We build upon their research by exploring factors that contribute to the persistence decision, as well as exploring how an entrepreneur's extrinsic motivation enhances or diminishes the effects of these factors. In investigating the persistence of under-performing firms we make three main contributions. First, through the application of Staw's (1981) theoretical model of commitment processes, we more fully explore the factors that lead entrepreneurs to persist with under-performing firms. Specifically, we develop hypotheses to test how the probability of and perceived value of future outcomes (predicted by environmental complexity, dynamism, and munificence), self-justifying factors (operationalized as personal investment and personal options) and norms for organizational consistency (operationalized as previous organizational success and perceived collective efficacy) impact the persistence decision. Second, an implicit assumption of the economic firm performance perspective is that individuals are homogeneous and make decisions based solely upon their firm's financial performance. However, we contend that there is heterogeneity among entrepreneurs in their extrinsic motivation, which can help explain why some entrepreneurs have a different threshold of performance which ultimately affects their decision to persist with an under-performing firm. Finally, research on firm persistence presents significant methodological challenges. Not only is it difficult identify from a sample of individuals from under-performing entrepreneurial firms, the stories that the entrepreneurs tell may be fraught with bias and error. The conjoint experimental methodology used in this study allows for the capture of the real-time decisions entrepreneurs make to persist or to discontinue operations, while avoiding most biases inherent in research on persistence based upon post-hoc rationalizations. To test our model, we use a sample of entrepreneurs of small firms in high technology industries. Although the literature on small firms lags behind that of larger firms, small firms have the greatest potential to impact an economy (Acs, 1999). Whether these small firms are created to fill the niche generated by larger firms (Penrose, 1959) or created to exploit cutting edge technology, they provide 60–80% of new net jobs, represent 99.7% of all employers and account for 41% of jobs in high technology sectors (Small Business Administration, 2006). In addition, the entrepreneurs in small firms have a larger equity stake in the company (Wasserman, 2003) and greater psychological ownership (Pierce et al., 2001) which allows them to have more discretion than the managers of large firms (Hambrick and Finkelstein, 1987) and more control over exit events (DeTienne, 2007 and Wasserman, 2003). The article proceeds as follows: We begin with an introduction of under-performing persistent firms and threshold theory as they apply to our model. We then develop hypotheses, describe our research method, present our findings, and discuss the results and contributions.