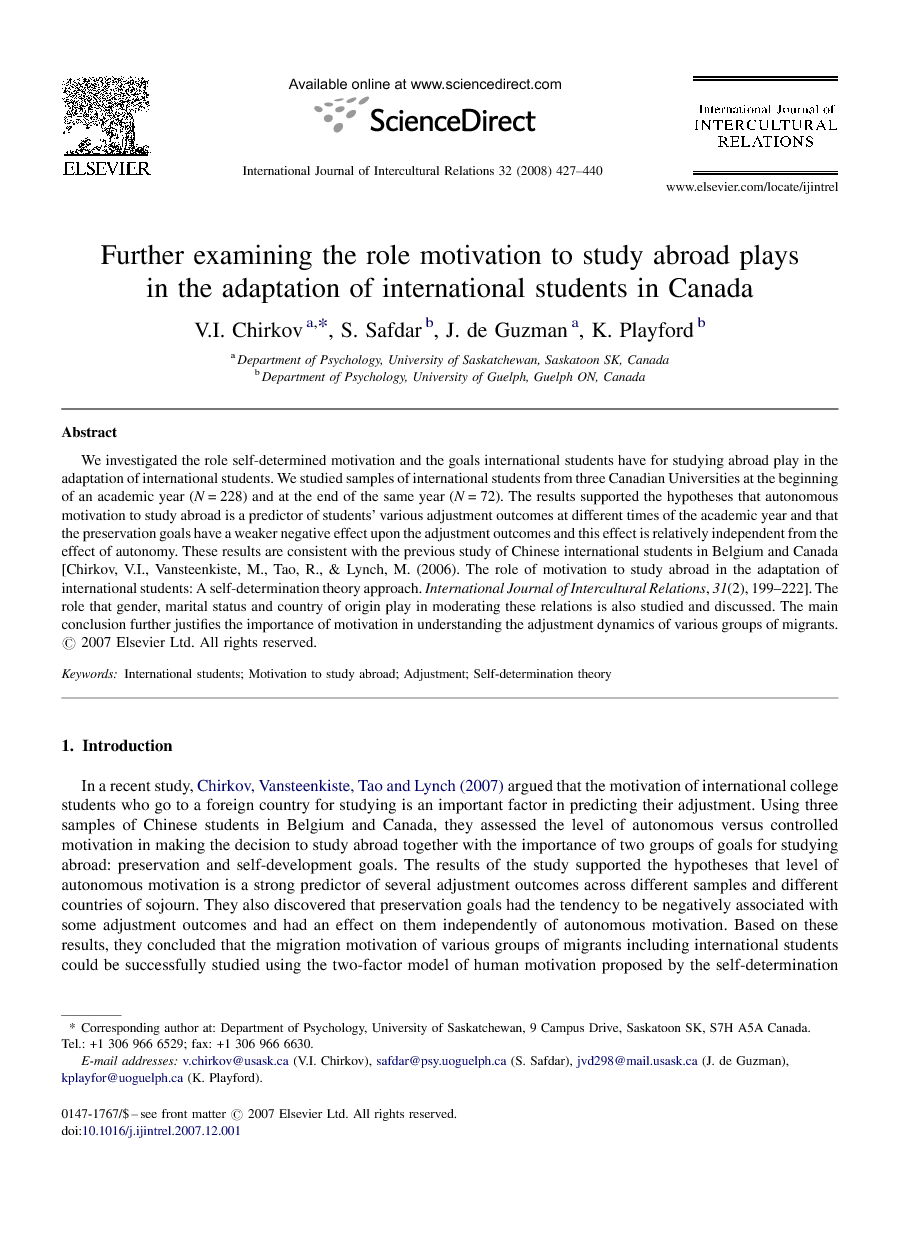 We investigated the role self-determined motivation and the goals international students have for studying abroad play in the adaptation of international students. We studied samples of international students from three Canadian Universities at the beginning of an academic year (N = 228) and at the end of the same year (N = 72). The results supported the hypotheses that autonomous motivation to study abroad is a predictor of students’ various adjustment outcomes at different times of the academic year and that the preservation goals have a weaker negative effect upon the adjustment outcomes and this effect is relatively independent from the effect of autonomy. These results are consistent with the previous study of Chinese international students in Belgium and Canada [Chirkov, V.I., Vansteenkiste, M., Tao, R., & Lynch, M. (2006). The role of motivation to study abroad in the adaptation of international students: A self-determination theory approach. International Journal of Intercultural Relations, 31(2), 199–222]. The role that gender, marital status and country of origin play in moderating these relations is also studied and discussed. The main conclusion further justifies the importance of motivation in understanding the adjustment dynamics of various groups of migrants.

In a recent study, Chirkov, Vansteenkiste, Tao and Lynch (2007) argued that the motivation of international college students who go to a foreign country for studying is an important factor in predicting their adjustment. Using three samples of Chinese students in Belgium and Canada, they assessed the level of autonomous versus controlled motivation in making the decision to study abroad together with the importance of two groups of goals for studying abroad: preservation and self-development goals. The results of the study supported the hypotheses that level of autonomous motivation is a strong predictor of several adjustment outcomes across different samples and different countries of sojourn. They also discovered that preservation goals had the tendency to be negatively associated with some adjustment outcomes and had an effect on them independently of autonomous motivation. Based on these results, they concluded that the migration motivation of various groups of migrants including international students could be successfully studied using the two-factor model of human motivation proposed by the self-determination theory (SDT) of human motivation (Deci & Ryan, 2000; Sheldon, Ryan, Deci, & Kasser, 2004). This model is comprised of the level of autonomous versus controlled motivation and the content of goals that motivate people to move abroad. Chirkov et al. also mentioned that these conclusions should be verified on different samples of migrants and sojourners using various designs. In this article, we continue this direction of research on migration motivation and apply the two-factor model of migration motivation to multiethnic groups of international students from different Canadian universities. We have solid evidence to propose that the students who feel that they initiated their decision to study abroad and stood behind it will be happier, less distressed and more successful in adjusting to a new country in comparison to those who feel they were pressured by other people or circumstances to move abroad. The reason for this confidence comes not only from the empirical results of the above-mentioned study, but also from the intensive theoretical and empirical research on the role of autonomy and self-determination in people's functioning conducted by the self-determination theory researchers (Deci & Ryan, 1985, 2002; Ryan and Deci, 2000 and Ryan and Deci, 2004). According to the self-determination theory (SDT), striving for autonomy, the desire to be the master of one's behavior, is a fundamental need of every human being. As empirical research demonstrated, whatever activity people undertake, their success and their well-being while executing it strongly depends on their level of self-determination in choosing and performing it [see (Deci & Ryan, 2002)]. Researchers discovered with near universal regularity that people who are involved in activities because they either enjoy them and find them interesting or because they truly believe in the importance of the activities and strongly endorse them by identifying with their values and integrating them into their selves are more successful, happier and healthier than people who do not have this kind of motivation (Deci, Vallerand, Pelletier, & Ryan, 1991; Gagne & Deci, 2005; Ryan, Deci, Grolnick, & La Guardia, 2006; Sheldon, Williams, & Joiner, 2003). There is no reason to think that the decision to study abroad is in any aspect different from other activities that have been studied so far. The other aspect of human motivation that SDT researchers constantly emphasize is the content of the goals that people set for themselves in their daily lives. These researchers mainly study people's life-goals which are value-like, life-guiding principles (Kasser and Ryan, 1993 and Kasser and Ryan, 1996), whereas, Chirkov et al. (2007) addressed the goals of international students to move abroad as “more specific situational objectives that are shaped by their situation in the home country, relationships with families, future career goals and other conditions” (p. 205). These researchers discovered two groups of international students’ goals: preservation and self-development goals. This distinction corresponds closely with the traditional conceptualization of migration motivation, as suggested by economists and sociologists, which differentiates ‘push’ and ‘pull’ motives (Martin, 1993). Preservation goals include various strivings to avoid aversive situations in their home country in order to preserve their security, freedom and other humane conditions. Self-development goals incorporate strivings related to obtaining better education and establishing successful careers. Consequently, the motivation of each international student could be represented by a combination of the two types of goals that motivated them to study abroad together with the level of self-determination that they exercised during this decision. This model of migration motivation raises several questions: do the content of the goals and the level of autonomy that motivate international students have any relation with the success of their adjustment and functioning in a new country? Do these goals relate in any systematic way with a student's level of self-determination and are there any interactions between goals and autonomy in predicting adaptation outcomes? Although the above-mentioned study provided answers to some of these questions, more research is required to verify the discovered relations and to analyze them in more details. Specifically, Chirkov et al. discovered that the level of autonomy is a stronger predictor of adjustment than are preservation goals and that autonomy and the preservation goals are independent predictors of the academic motivation and well-being of Chinese students abroad.