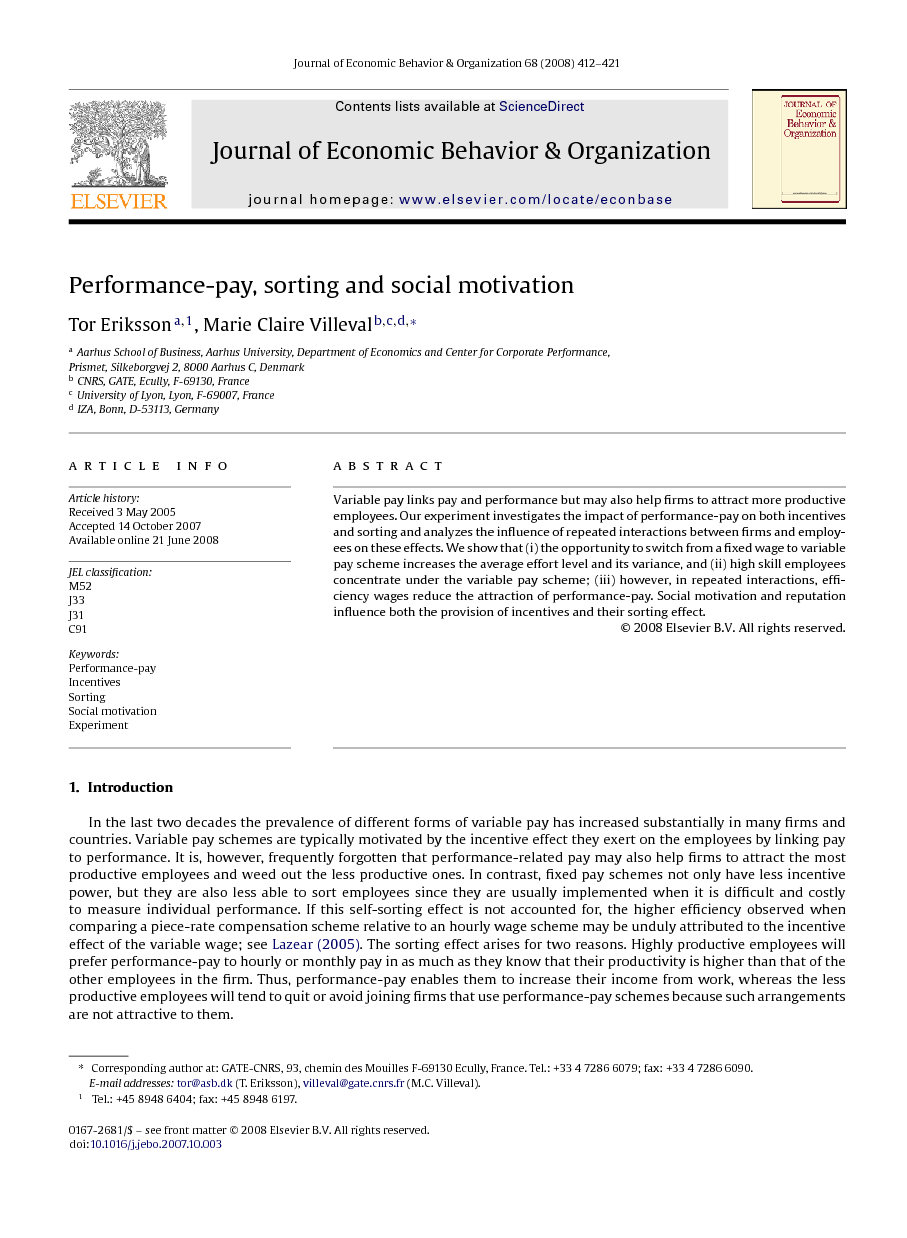 ariable pay links pay and performance but may also help firms to attract more productive employees. Our experiment investigates the impact of performance-pay on both incentives and sorting and analyzes the influence of repeated interactions between firms and employees on these effects. We show that (i) the opportunity to switch from a fixed wage to variable pay scheme increases the average effort level and its variance, and (ii) high skill employees concentrate under the variable pay scheme; (iii) however, in repeated interactions, efficiency wages reduce the attraction of performance-pay. Social motivation and reputation influence both the provision of incentives and their sorting effect

Economic theory of performance-pay schemes predicts that the switch from a fixed to a variable pay scheme should increase the average output per worker because of incentive effects. Moreover, if workers differ with respect to ability, the high skill employees should be more attracted by the performance-pay than the low skill employees since it allows them to receive a higher wage by exerting more effort. Our experimental evidence confirms the coexistence of the sorting and the incentive effects of payment schemes as in Lazear (2000). It shows that a switch from a homogenous environment to an environment in which both a fixed and a variable pay schemes coexist entails an increase in both average effort and the variance of effort. Effort only increases for the high skill employees because the variable pay scheme induces them to work harder. The low skill employees are not attracted by the variable pay scheme when firms offer non-minimum fixed wages. This observation suggests that there is a limit on the adoption of performance-pay despite its incentive effect. This adoption increases team heterogeneity within firms, with a widening wage gap that may generate conflicts. Consequently, variable pay schemes are less likely implemented in firms promoting teamwork. The comparison between our market and partner conditions shows that the employees who choose the variable pay scheme are not necessarily the most ambitious ones. Provided the rent offered is sufficiently high, in a repeated interaction, a non-negligible fraction of the high skill employees also opt for the fixed pay. This indicates that if a firm pays efficiency wages to attract reciprocal employees and to allow for less unequal payoffs, then the variable pay scheme becomes less attractive to the skilled employees relative to the fixed pay scheme. Thus the social motivation of the subjects influences not only the provision of incentives, but may also affect their incentive and sorting effects. Although our design does not leave much room for reciprocity due to the limited space of strategies, we nevertheless observe a smaller ability-based segmentation of employees when firms make generous offers and a smaller productivity gap when employees accept these efficiency wages and try to build a reputation of reciprocity. Therefore, we would expect that a design allowing for a larger scope for reciprocity would weaken this ability-based segmentation even further. An avenue for further research would be to look for a sorting effect based on social preferences and to analyze how social preferences and ability interact in the sorting process. This could contribute to explaining why we observe less segmentation of labor markets according to ability than expected by theory. Our results already suggest that we would expect to observe less performance-pay in long-term employment relationships. This, in turn, could imply that differences across countries with respect to the employment protection legislation may be accompanied by differences in the prevalence of performance-pay schemes.