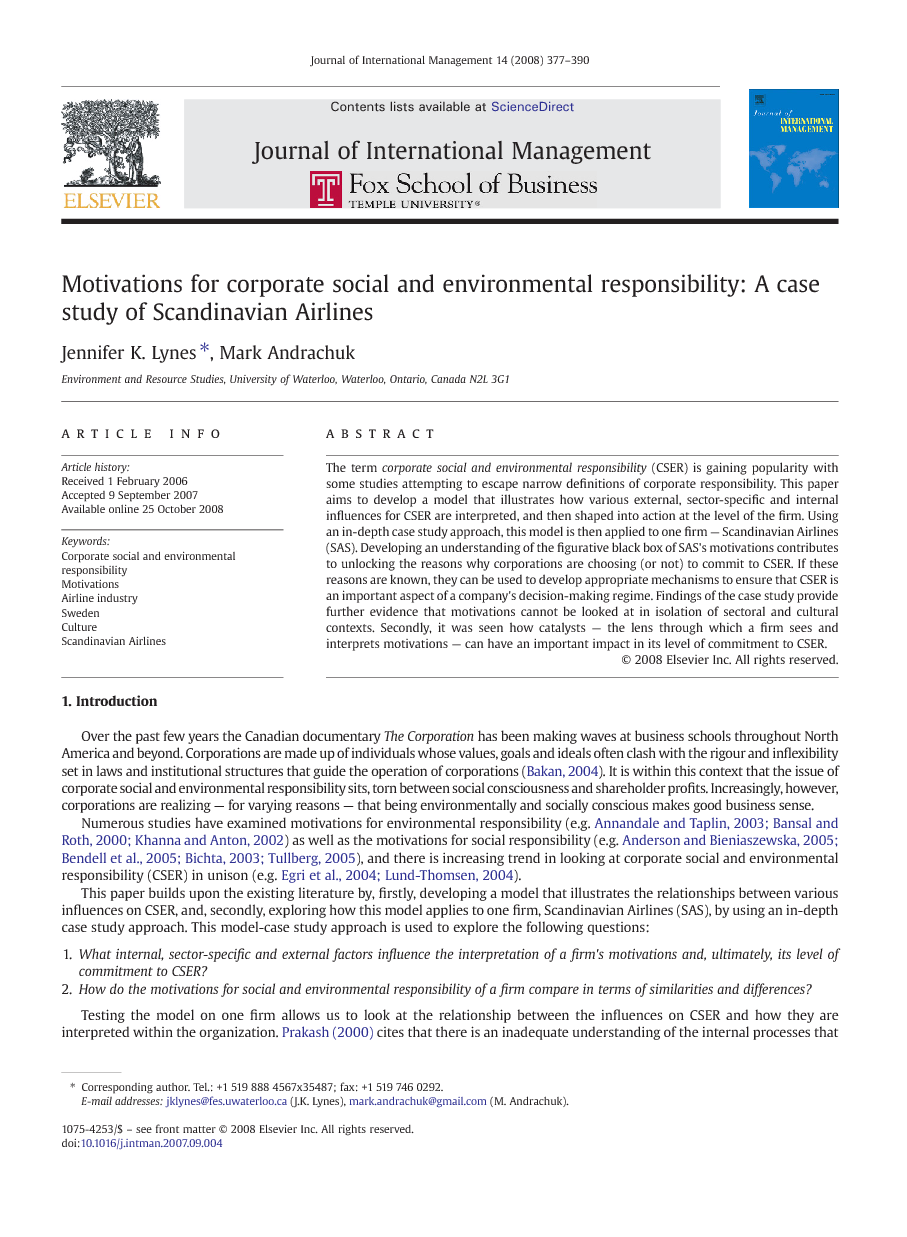 The term corporate social and environmental responsibility (CSER) is gaining popularity with some studies attempting to escape narrow definitions of corporate responsibility. This paper aims to develop a model that illustrates how various external, sector-specific and internal influences for CSER are interpreted, and then shaped into action at the level of the firm. Using an in-depth case study approach, this model is then applied to one firm — Scandinavian Airlines (SAS). Developing an understanding of the figurative black box of SAS's motivations contributes to unlocking the reasons why corporations are choosing (or not) to commit to CSER. If these reasons are known, they can be used to develop appropriate mechanisms to ensure that CSER is an important aspect of a company's decision-making regime. Findings of the case study provide further evidence that motivations cannot be looked at in isolation of sectoral and cultural contexts. Secondly, it was seen how catalysts — the lens through which a firm sees and interprets motivations — can have an important impact in its level of commitment to CSER.

Over the past few years the Canadian documentary The Corporation has been making waves at business schools throughout North America and beyond. Corporations are made up of individuals whose values, goals and ideals often clash with the rigour and inflexibility set in laws and institutional structures that guide the operation of corporations (Bakan, 2004). It is within this context that the issue of corporate social and environmental responsibility sits, torn between social consciousness and shareholder profits. Increasingly, however, corporations are realizing — for varying reasons — that being environmentally and socially conscious makes good business sense. Numerous studies have examined motivations for environmental responsibility (e.g. Annandale and Taplin, 2003, Bansal and Roth, 2000 and Khanna and Anton, 2002) as well as the motivations for social responsibility (e.g. Anderson and Bieniaszewska, 2005, Bendell et al., 2005, Bichta, 2003 and Tullberg, 2005), and there is increasing trend in looking at corporate social and environmental responsibility (CSER) in unison (e.g. Egri et al., 2004 and Lund-Thomsen, 2004). This paper builds upon the existing literature by, firstly, developing a model that illustrates the relationships between various influences on CSER, and, secondly, exploring how this model applies to one firm, Scandinavian Airlines (SAS), by using an in-depth case study approach. This model-case study approach is used to explore the following questions: 1. What internal, sector-specific and external factors influence the interpretation of a firm's motivations and, ultimately, its level of commitment to CSER? 2. How do the motivations for social and environmental responsibility of a firm compare in terms of similarities and differences? Testing the model on one firm allows us to look at the relationship between the influences on CSER and how they are interpreted within the organization. Prakash (2000) cites that there is an inadequate understanding of the internal processes that lead a firm to adopt, or not adopt, environmental policies, arguing that an examination of intra-firm dynamics is required to supplement the existing literature on external pressures that firms face (see also Gilley et al., 2000). Developing an understanding of the figurative black box of SAS's motivations contributes to unlocking the reasons why corporations are choosing (or not) to commit to CSER. If these reasons are known, they can be used to develop appropriate mechanisms to ensure that CSER is an important aspect of a company's decision-making regime. Although some studies have looked at a survey of sectors or cross-sectoral companies (e.g. Egri et al., 2004 and Lund-Thomsen, 2004), few studies have examined motivations for CSER in depth with one company. This is the first study to look at CSER in relation to the airline industry. The airline industry provides an appealing backdrop to this paper. To date, much of the literature concerning the motivations for CSER concentrates on heavy industries such as the mining, chemical and energy sectors; moreover, there is a paucity of research on CSER in the service sector (i.e. Céspedes-Lorente et al., 2003 and Kirk, 1998). Although commercial aviation is part of the service sector, it possesses several characteristics similar to those of manufacturing industries, including intense regulation, high entry barriers, high capital costs, and tendencies towards oligopolies (Clancy, 2001). The airline industry thus presents an interesting juxtaposition between these two sectors. Furthermore, air emissions, the largest environmental impact of aircraft, are often excluded from regulatory attempts at controlling environmental impact, thus, demonstrating a need for CSER in the airline sector.

The aim of this study was to firstly, develop a model that illustrated how influences are interpreted and then shaped by a firm into its commitment towards CSER and, secondly, to then apply this model using a case study of one firm. The conceptual model presented in Fig. 1 contributes to the existing literature by unpacking the layers of influences that affect SAS's motivations for both social and environmental responsibility and framing these in a way that allows deeper insight into understanding the relationships between them. Application of this model to other firms, both within the airline industry and beyond, would allow for comparison between firms within the same sector as well as cross-sectorally. In this regard, the case study of SAS provides further evidence that motivations cannot be looked at in isolation of sectoral and cultural contexts. The information obtained from the model-case study approach helps to explain and understand differences in levels of commitment towards CSER and as well as differences in the way firms manage social and environmental responsibility. Secondly, the SAS case study demonstrated the degree to which catalysts — the lens through which a company sees and interprets motivations — can have an important impact its level of commitment to CSER. The findings highlight the importance of culture in determining social and environmental motivations at SAS. It was found that the social democratic ideology of the Scandinavian people has a profound influence on the level of SAS's social and environmental commitment. The Scandinavian Spirit of social and environmental responsibility is embedded in the day-to-day operation of SAS. This pressure could be described as being subtle, but consistent, such as the habit of putting on your seatbelt when you get into a car. It could be argued that if the variable of Scandinavian Spirit exists as we say it does, then all Scandinavian companies would be equally influenced by this factor. While this holds true to a certain extent with regards to social commitment, the case study of SAS demonstrated that other catalysts such as internal leadership also have a profound effect on shaping motivations into action. The effect that environmental champions have on the interpretation of the influences defined in the model help to take environmental responsibility at SAS to a higher level. The combination of strong cultural and internal leadership catalysts at SAS is what sets it apart from other airlines operating under similar sectoral and external influences. Thirdly, the case study of SAS both illustrated and reinforced findings in the literature that there are differences between motivations for social and environmental responsibility. By looking at social and environmental responsibility together as one entity, we run the risk of forgetting about the distinctiveness of each. In the case of SAS, between 2003 and 2006, management has moved towards creating a sustainability plan that, in many ways, combines the S and the E together — such as changing the title of the previous Environmental Director of SAS to be Sustainability Director and integrating the Environmental Report into a Financial and Sustainability Report. The result appears to be a broader interpretation of sustainability at the management level, with the action being taken at the operational level being less detailed. While the trend towards branding sustainability might satisfy increasing demands on reporting requirements, it does not bode well for the actual level of commitment of a firm, such as SAS, towards CSER, as defined by the model. 5.1. Future directions of research Firstly, while previous studies have explored the relationship between CSER and culture (e.g. Branzei et al., 2001 and Egri et al., 2004) the empirical research in this area remains limited and requires further investigative research. The issue of culture becomes particularly important when looking at firms, such as airlines, which operate in a cross-national setting where the values of their home country may differ from other cultures in which they operate. For example, because of differing fundamental assumptions within other cultures of what being socially responsible is, as SAS expands its operations abroad, it is having to adjust its social reporting mechanisms to better reflect the airline's commitment towards social responsibility. The evidence provided in this case study of SAS now needs to be complemented by further research that examines and compares the relationships between CSER and culture. The important role that culture plays is particularly relevant to 1) comparing motivations for companies in different countries but in the same industry and 2) examining motivations for firms that operate cross-nationally. For example how are cultural norms transferred (if at all) to corporate branches which operate under varying national norms and values? Volvo is one example of a company which built human-centered assembly lines in North America that went against the grain of the U.S. auto industry (Resetar et al., 1998). Secondly, this paper presented a conceptual model of influences, motivations and catalysts for CSER (Fig. 1) that could be used as a base from which to build upon in future studies that complement or compare the existing findings. Understanding influences on decision-making can determine the mechanisms needed to ensure continuous improvement of CSER. A fundamental tenet of this paper is that indicators must acknowledge the cultural motivations and values of business if they are to be deemed relevant by industry. Support for this argument comes from critics who argue that management of social and environmental issues is a cultural construct that requires solid understanding of the complex interactions between the natural and social sciences. Indicators that do not take into account the range of circumstances that influence corporate commitment towards both social and environmental responsibility the risk of failure.