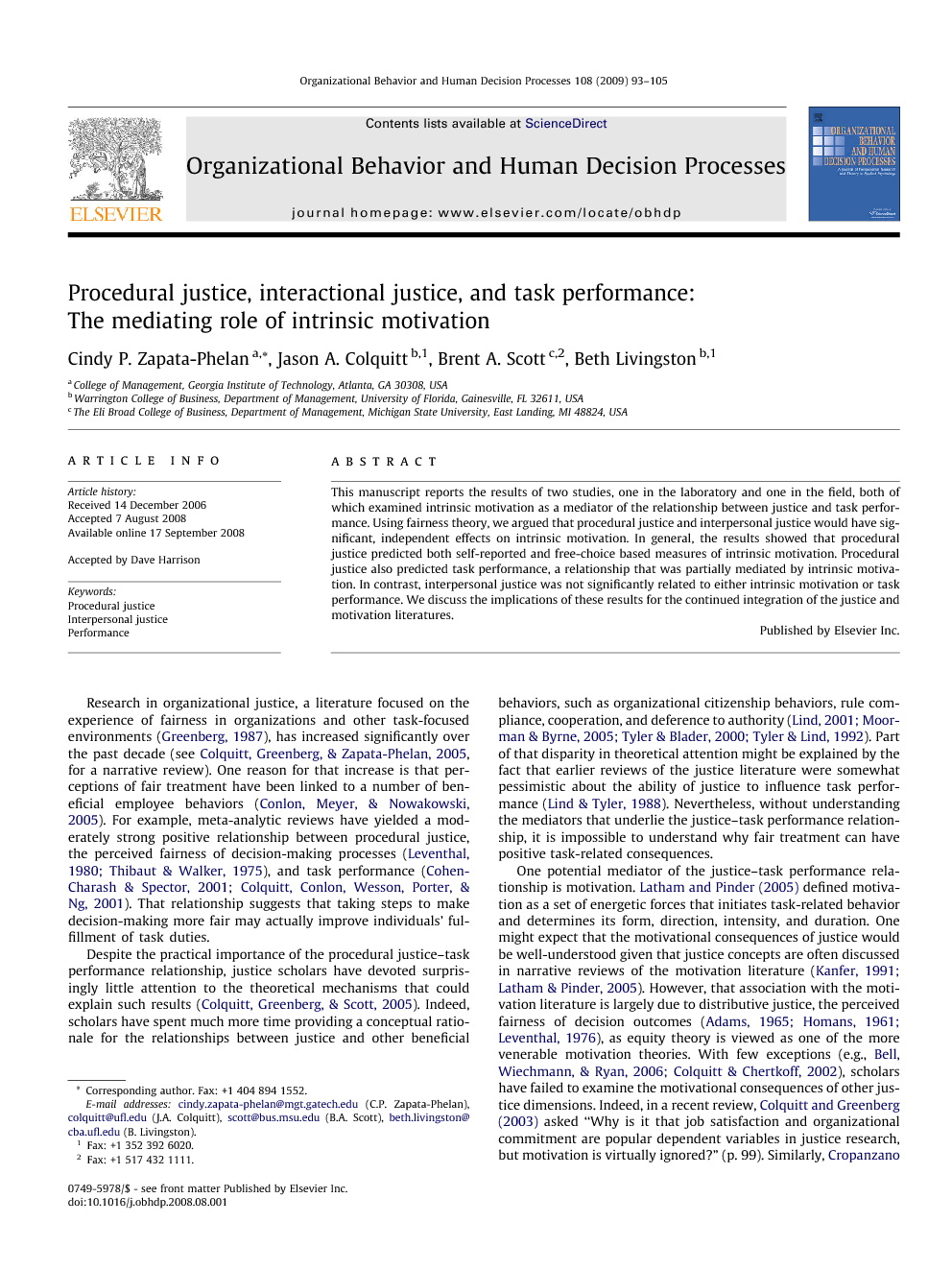 Research in organizational justice, a literature focused on the experience of fairness in organizations and other task-focused environments (Greenberg, 1987), has increased significantly over the past decade (see Colquitt, Greenberg, & Zapata-Phelan, 2005, for a narrative review). One reason for that increase is that perceptions of fair treatment have been linked to a number of beneficial employee behaviors (Conlon, Meyer, & Nowakowski, 2005). For example, meta-analytic reviews have yielded a moderately strong positive relationship between procedural justice, the perceived fairness of decision-making processes (Leventhal, 1980 and Thibaut and Walker, 1975), and task performance (Cohen-Charash and Spector, 2001 and Colquitt et al., 2001). That relationship suggests that taking steps to make decision-making more fair may actually improve individuals’ fulfillment of task duties. Despite the practical importance of the procedural justice–task performance relationship, justice scholars have devoted surprisingly little attention to the theoretical mechanisms that could explain such results (Colquitt, Greenberg, & Scott, 2005). Indeed, scholars have spent much more time providing a conceptual rationale for the relationships between justice and other beneficial behaviors, such as organizational citizenship behaviors, rule compliance, cooperation, and deference to authority (Lind, 2001, Moorman and Byrne, 2005, Tyler and Blader, 2000 and Tyler and Lind, 1992). Part of that disparity in theoretical attention might be explained by the fact that earlier reviews of the justice literature were somewhat pessimistic about the ability of justice to influence task performance (Lind & Tyler, 1988). Nevertheless, without understanding the mediators that underlie the justice–task performance relationship, it is impossible to understand why fair treatment can have positive task-related consequences. One potential mediator of the justice–task performance relationship is motivation. Latham and Pinder (2005) defined motivation as a set of energetic forces that initiates task-related behavior and determines its form, direction, intensity, and duration. One might expect that the motivational consequences of justice would be well-understood given that justice concepts are often discussed in narrative reviews of the motivation literature (Kanfer, 1991 and Latham and Pinder, 2005). However, that association with the motivation literature is largely due to distributive justice, the perceived fairness of decision outcomes (Adams, 1965, Homans, 1961 and Leventhal, 1976), as equity theory is viewed as one of the more venerable motivation theories. With few exceptions (e.g., Bell et al., 2006 and Colquitt and Sakthi, 2002), scholars have failed to examine the motivational consequences of other justice dimensions. Indeed, in a recent review, Colquitt and Greenberg (2003) asked “Why is it that job satisfaction and organizational commitment are popular dependent variables in justice research, but motivation is virtually ignored?” (p. 99). Similarly, Cropanzano and Rupp (2003) asked “Wherefore organizational justice amidst theories of work motivation?” (p. 91). The purpose of the present research was to examine a motivation-based explanation for the relationship between justice and task performance. We focused on procedural justice given that it has the strongest zero-order and independent relationships with task performance in meta-analytic reviews (Cohen-Charash and Spector, 2001 and Colquitt et al., 2001). However, we also included interpersonal justice, which reflects the perceived fairness of the interpersonal treatment received during an authority’s enactment of procedures (Bies & Moag, 1986). In contrast to procedural justice, the task performance benefits of interpersonal justice remain unclear. Meta-analytic estimates revealed near-zero correlations with task performance but were based on very few studies (Cohen-Charash and Spector, 2001 and Colquitt et al., 2001). Studies that have been published subsequent to those meta-analyses have sometimes yielded non-significant relationships between interpersonal justice and task performance (Colquitt et al., 2006, Kickul et al., 2002 and Weaver and Conlon, 2003) and other times yielded significant relationships (Cropanzano et al., 2002, Ramaswami and Singh, 2003 and Rupp and Cropanzano, 2002). Including interpersonal justice in our study therefore helps to extend our understanding of the potential performance effects of fair interpersonal treatment. More specifically, the present research examined whether high levels of procedural and interpersonal justice could foster a sense of intrinsic motivation that would be positively associated with task performance. Intrinsic motivation exists when performing a task serves as its own reward, due to a sense of enjoyment and pleasure (Deci, Koestner, & Ryan, 1999). Intrinsic motivation therefore involves the experience of positive affect while tasks are being completed ( Izard, 1977, Pretty and Seligman, 1984, Reeve et al., 1986 and Vallerand, 1997). We focused our investigation on intrinsic motivation for two reasons. First, intrinsic motivation offers a complement to the more extrinsic focus of equity theory and distributive justice, thereby broadening our understanding of justice and motivation. Second, past research has shown that procedural and interpersonal justice have significant effects on affect and emotions ( Cropanzano et al., 2000, Krehbiel and Cropanzano, 2000 and Weiss et al., 1999), which gives those justice dimensions a potential relevance to intrinsic motivation. Below, we offer conceptual support for intrinsic motivation as a mediator of the justice–task performance relationship and describe two studies—one in the lab and one in the field—that test that prediction.