عنوان انگلیسی
“Everyone rolls up their sleeves and mucks in”: Exploring volunteers’ motivation and experiences of the motivational climate of a sporting event
دانلود فوری مقاله + سفارش ترجمه 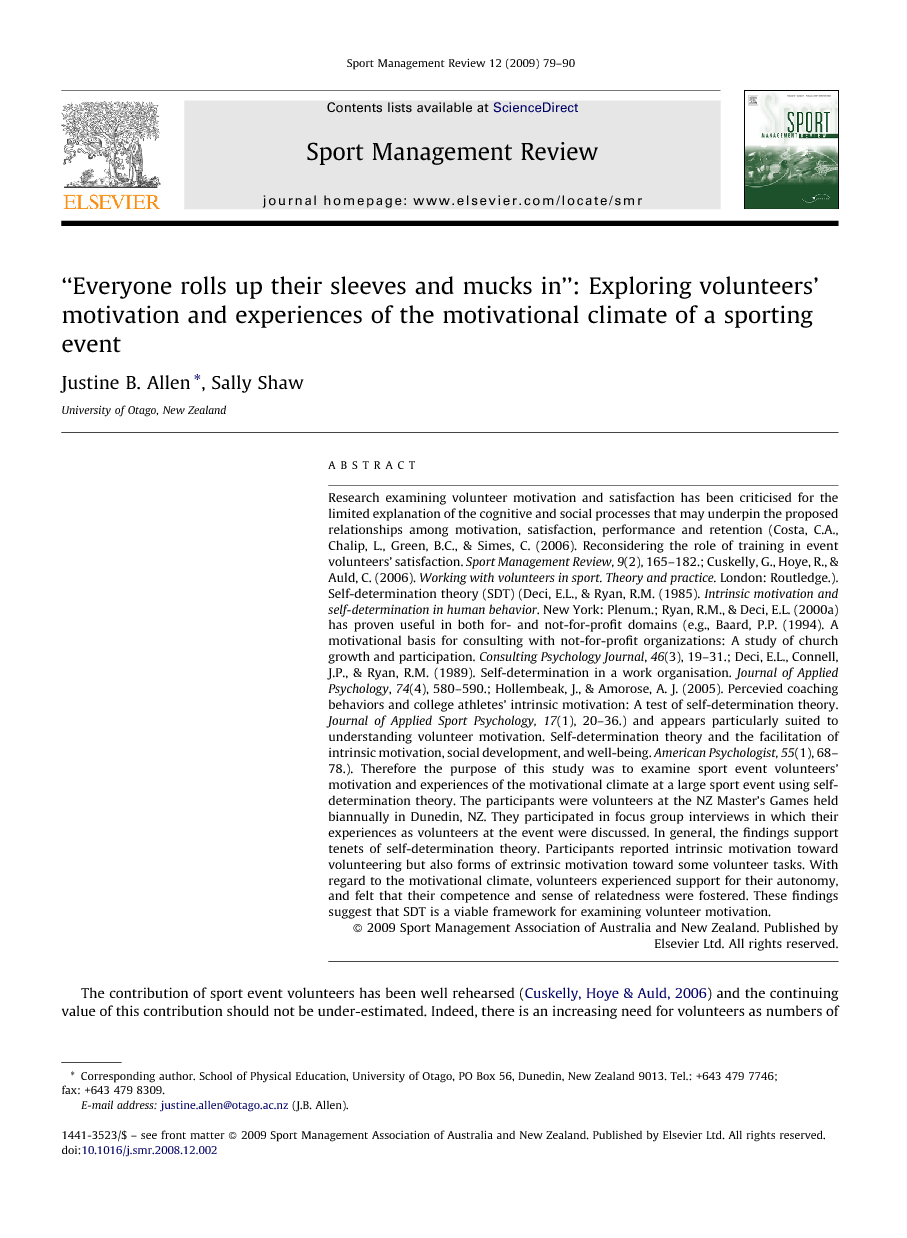 Research examining volunteer motivation and satisfaction has been criticised for the limited explanation of the cognitive and social processes that may underpin the proposed relationships among motivation, satisfaction, performance and retention (Costa, C.A., Chalip, L., Green, B.C., & Simes, C. (2006). Reconsidering the role of training in event volunteers’ satisfaction. Sport Management Review, 9(2), 165–182.; Cuskelly, G., Hoye, R., & Auld, C. (2006). Working with volunteers in sport. Theory and practice. London: Routledge.). Self-determination theory (SDT) (Deci, E.L., & Ryan, R.M. (1985). Intrinsic motivation and self-determination in human behavior. New York: Plenum.; Ryan, R.M., & Deci, E.L. (2000a) has proven useful in both for- and not-for-profit domains (e.g., Baard, P.P. (1994). A motivational basis for consulting with not-for-profit organizations: A study of church growth and participation. Consulting Psychology Journal, 46(3), 19–31.; Deci, E.L., Connell, J.P., & Ryan, R.M. (1989). Self-determination in a work organisation. Journal of Applied Psychology, 74(4), 580–590.; Hollembeak, J., & Amorose, A. J. (2005). Percevied coaching behaviors and college athletes’ intrinsic motivation: A test of self-determination theory. Journal of Applied Sport Psychology, 17(1), 20–36.) and appears particularly suited to understanding volunteer motivation. Self-determination theory and the facilitation of intrinsic motivation, social development, and well-being. American Psychologist, 55(1), 68–78.). Therefore the purpose of this study was to examine sport event volunteers’ motivation and experiences of the motivational climate at a large sport event using self-determination theory. The participants were volunteers at the NZ Master's Games held biannually in Dunedin, NZ. They participated in focus group interviews in which their experiences as volunteers at the event were discussed. In general, the findings support tenets of self-determination theory. Participants reported intrinsic motivation toward volunteering but also forms of extrinsic motivation toward some volunteer tasks. With regard to the motivational climate, volunteers experienced support for their autonomy, and felt that their competence and sense of relatedness were fostered. These findings suggest that SDT is a viable framework for examining volunteer motivation.

Volunteer motivation and satisfaction have been a focus of research aimed at developing an understanding of factors influencing volunteers’ performance and retention (Cuskelly, Hoyle, & Auld, 2006; Stebbins & Graham, 2004). Much of this research describes individual motives or general categories of motives for volunteering (e.g. Fairley, Kellett & Green, 2007; Farrell, Johnston & Twynam, 1998; Knoke & Prensky, 1984). For example, Knoke and Prensky describe three general motives or incentives for volunteering; normative (altruism), utilitarian (self-interest), and affective. With regard to the motives of sport event volunteers, Farrell and colleagues identified four categories of motives: purposive, solidary, external traditions and commitments. Fairley et al. described nostalgia, camaraderie and friendship, Olympic connection, and sharing and acknowledgement of expertise as the four key motives to emerge from their study of Olympic Games volunteers. The connection with the event as a motive for volunteering was identified in both the Farrell et al. and Fairley et al. studies and has been supported by several other studies of large multisport event volunteers (Ralston, Downward, & Lumsden, 2004; Reeser, Berg, Rhea, & Willick, 2005). In addition to motivation, volunteer satisfaction is considered important because of an assumed association between satisfaction and retention. Cnaan and Goldberg-Glen (1991) stated that “people will continue to volunteer as long as the experience as a whole is rewarding and satisfying” (p. 281). Similar to the volunteer motives research, researchers examining sources of satisfaction have reported a variety of factors that influence volunteers’ level of satisfaction. These include the opportunity to expand one's social network, be part of an event, and achieve job competence (Elstad, 1997). In addition, management practices such as facilitating the quality of communication between volunteers and recognition for their efforts have been associated with satisfaction (Johnston, Twynam, & Farrell, 2000). For sport event volunteers, satisfaction has been related to communication between volunteers and the recognition of volunteers’ efforts (Farrell et al., 1998 and Reeser et al., 2005). Identifying volunteers’ motives and sources of satisfaction is an important step to understanding volunteer performance and retention. Recently researchers have begun to move beyond this description to explore empirically the relationships among factors that are related to volunteer performance and retention. Costa, Chalip, Green, & Simes (2006) identified relationships among contribution, community, commitment, and job satisfaction among non-specialist event volunteers. Although a step towards developing our understanding of how satisfaction might be facilitated, previous research does not explain why relationships exist and therefore what might be predicted in future or different contexts. To date the volunteer literature in the area of motivation, satisfaction, performance, and retention only describes motives, antecedent factors, and empirical relationships. There is a lack of clear theoretical frameworks that can explain the cognitive and social processes that underpin the proposed relationships among motivation, satisfaction, performance and retention. With a better explanation of why relationships exist among these factors, those working with volunteers will be better placed to predict future volunteer behaviour and therefore provide empirically based guidance for those working with volunteers.

There has been a call for researchers to not only describe volunteer motives, sources of satisfaction and the potential relationships with performance and retention but to begin to examine the underpinning psychosocial processes (Costa et al., 2006 and Cuskelly et al., 2006; Green & Challip, 2004). Understanding these processes will enable researchers to explain and predict volunteer behaviour and allow managers to understand the potential effectiveness of current and new strategies to foster volunteers’ motivation, satisfaction and ultimately performance and retention. The purpose of this study was to examine the potential for adopting the SDT framework to further our understanding of volunteer motivation and related outcomes at sporting events. This theoretical framework proved useful. First, rather than focusing on describing the variety of motives for volunteering, SDT enabled the development of an understanding of volunteers’ behavioural regulation processes. Specifically, the extent to which volunteers are intrinsically and extrinsically motivated and the extent to which their extrinsic motivation is self-determined or controlled was examined. In addition, preliminary evidence was established for relationships between self-determined forms of motivation and desirable outcomes such as performance and retention. Second, adopting the SDT concept of need satisfaction enabled delineation of the social contextual factors that supported self-determined motivation and related positive outcomes. Furthermore, the crucial role played by the volunteer managers in fostering a motivational climate in which needs are satisfied or thwarted was identified. This study was an exploratory study and it was not intended that the findings be generalised. However, future research should examine the applicability of SDT in other sport event volunteer management contexts and empirically test the propositions of SDT in the sport volunteer management domain.