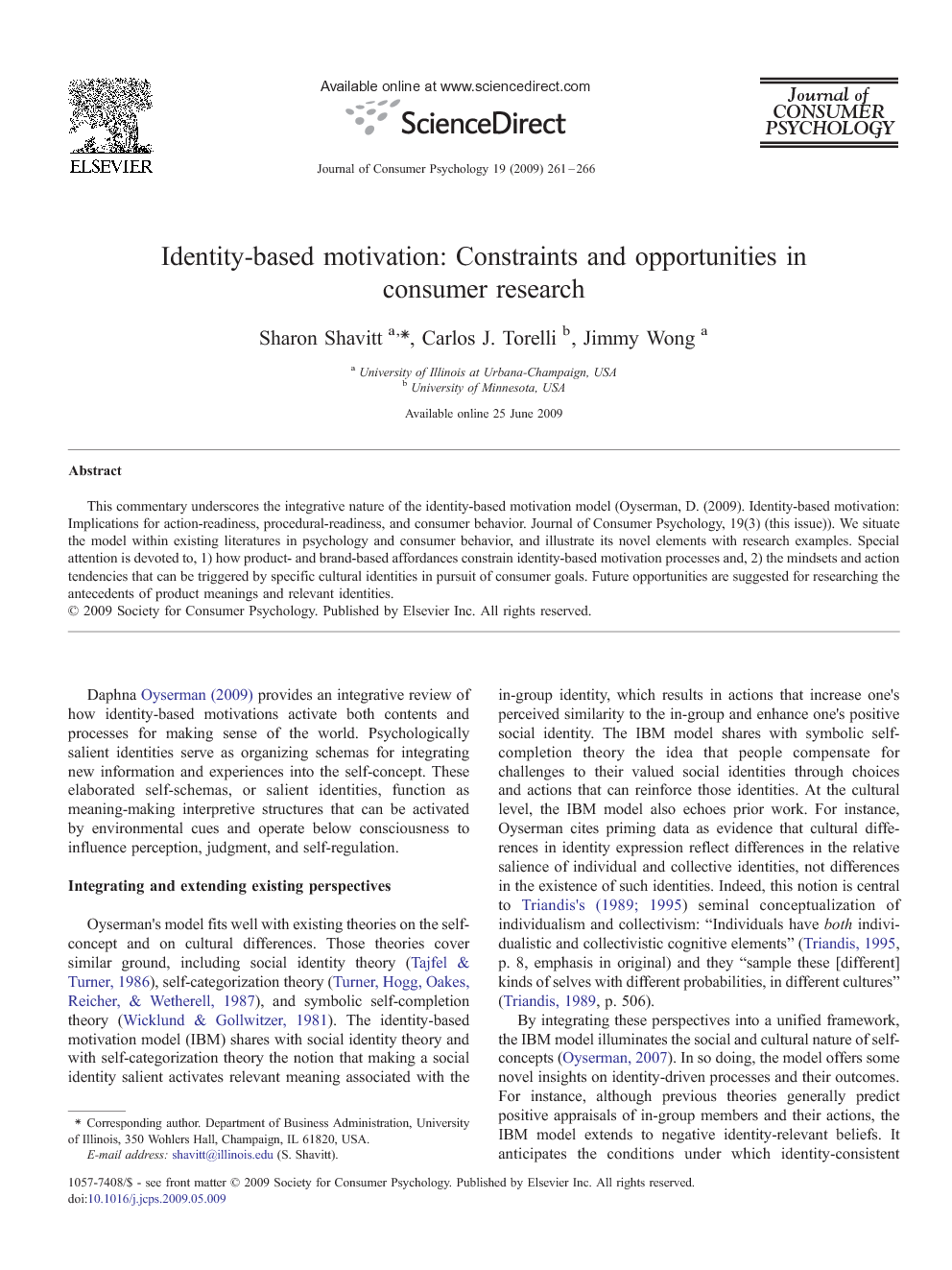 This commentary underscores the integrative nature of the identity-based motivation model (Oyserman, D. (2009). Identity-based motivation: Implications for action-readiness, procedural-readiness, and consumer behavior. Journal of Consumer Psychology, 19(3) (this issue)). We situate the model within existing literatures in psychology and consumer behavior, and illustrate its novel elements with research examples. Special attention is devoted to, 1) how product- and brand-based affordances constrain identity-based motivation processes and, 2) the mindsets and action tendencies that can be triggered by specific cultural identities in pursuit of consumer goals. Future opportunities are suggested for researching the antecedents of product meanings and relevant identities

Oyserman's model fits well with existing theories on the self-concept and on cultural differences. Those theories cover similar ground, including social identity theory (Tajfel & Turner, 1986), self-categorization theory (Turner, Hogg, Oakes, Reicher, & Wetherell, 1987), and symbolic self-completion theory (Wicklund & Gollwitzer, 1981). The identity-based motivation model (IBM) shares with social identity theory and with self-categorization theory the notion that making a social identity salient activates relevant meaning associated with the in-group identity, which results in actions that increase one's perceived similarity to the in-group and enhance one's positive social identity. The IBM model shares with symbolic self-completion theory the idea that people compensate for challenges to their valued social identities through choices and actions that can reinforce those identities. At the cultural level, the IBM model also echoes prior work. For instance, Oyserman cites priming data as evidence that cultural differences in identity expression reflect differences in the relative salience of individual and collective identities, not differences in the existence of such identities. Indeed, this notion is central to Triandis, 1989 and Triandis, 1995) seminal conceptualization of individualism and collectivism: “Individuals have both individualistic and collectivistic cognitive elements” (Triandis, 1995, p. 8, emphasis in original) and they “sample these [different] kinds of selves with different probabilities, in different cultures” (Triandis, 1989, p. 506). By integrating these perspectives into a unified framework, the IBM model illuminates the social and cultural nature of self-concepts (Oyserman, 2007). In so doing, the model offers some novel insights on identity-driven processes and their outcomes. For instance, although previous theories generally predict positive appraisals of in-group members and their actions, the IBM model extends to negative identity-relevant beliefs. It anticipates the conditions under which identity-consistent behaviors would be enacted even when they have known negative consequences. Particularly important is the notion that a salient identity can trigger mental processes that guide subsequent action. Stereotypical behaviors can be made accessible and more likely to be enacted, increasing perceptions of in-group membership. In this way, making an identity salient activates identity-consistent processes that can operate outside of awareness and, in effect, sabotage the self while strengthening one's group identity (e.g., through disengaging from academic performance or from healthful lifestyles).

Where does identity-relevant meaning come from? Oyserman discusses the ways in which people manage identity-based meaning and make identity-congruent decisions. But how do things become “imbued with identity-based meaning?” What makes product choices feel identity-congruent? Although these issues are not the subject of Oyserman's article, the IBM model may offer novel implications for understanding the antecedents of product meaning. Consider the example of flossing teeth discussed by Oyserman. Dental floss would not normally engage identity-based motives—it does not symbolize values and is not consumed in a socially visible way (Shavitt, 1990). However, to the extent that it is perceived as part of an identity-nonsyntonic consumption pattern and “not something we do” (Oyserman, Fryberg, & Yoder, 2007), it may come to acquire utility in identifying with in-groups by diverging from outgroups. This suggests that product constraints on identity-based motivation may be less rigid than previous functional research has shown. Perhaps even highly utilitarian products will be imbued with identity-based meaning to the extent that people perceive that the level of product usage by their in-group differs markedly from that of key outgroup(s). Similarly, Oyserman describes how laundry detergent can acquire identity-based meaning for consumers who are part of a minority group in their community, by virtue of association with an in-group spokesperson (e.g., Deshpandé & Stayman, 1994). For minority group members, whose identity is more likely to be salient (McGuire, 1984), identity-based interpretive structures will often be activated and used to derive meaning from the stimulus environment. This implies that any product is more likely to acquire symbolic meanings for minority consumers than for other consumers. Future research could address the implications of group-specific attitude functions for identity signaling processes, product choices, and product segmentation efforts. What are the implications for health-promoting communications? When would it be effective to market an identity-nonsyntonic product by linking it to one's ethnicity (e.g., a dental floss with a Latina spokesperson and a Spanish brand name)? It is common practice to promote healthful lifestyles to ethnic-minority audiences using spokespeople from their ethnic group, in an effort to build trust and foster identification. There is a sizeable literature suggesting that such targeted ads are effective (see Williams, Lee, & Henderson, 2008 for a review). In contrast, Oyserman's analysis argues for a backfire effect, such that marketers and public health advocates should avoid this marketing approach, especially for persons who see healthful lifestyles as identity-incongruent. However, this analysis overlooks the possibility that the social meanings of products, and thus the identity signals they afford, change over time, and these changes can be discontinuous and dramatic (see Gladwell, 2000). The IBM model offers the insight that healthful lifestyles may be rejected because they conflict with an in-group identity. Yet, if the goal is to shift broader perceptions about healthful lifestyles, it is important also to consider identity as a dependent variable. How can communicators effectively shift in-group identity toward healthful lifestyles? Could flossing one's teeth weaken one's identity as Latino or African American? Addressing such questions could spur communicators to develop methods to bolster positive in-group identities when seeking to change harmful behaviors linked to those identities. Because the IBM model highlights the constructive nature of identity, it is well positioned to address the dynamic nature of meanings and identities, and develop methods to shift them in beneficial directions.