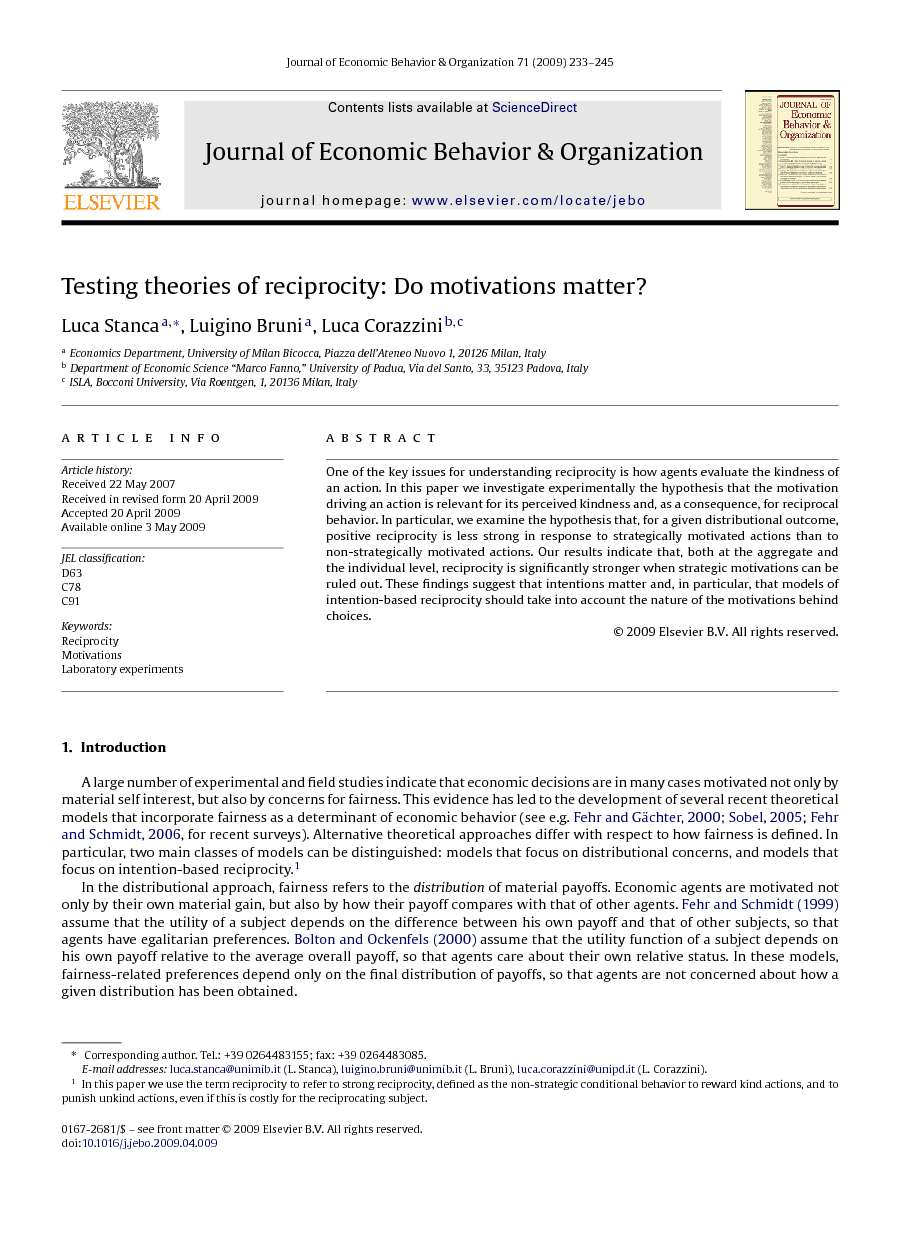 One of the key issues for understanding reciprocity is how agents evaluate the kindness of an action. In this paper we investigate experimentally the hypothesis that the motivation driving an action is relevant for its perceived kindness and, as a consequence, for reciprocal behavior. In particular, we examine the hypothesis that, for a given distributional outcome, positive reciprocity is less strong in response to strategically motivated actions than to non-strategically motivated actions. Our results indicate that, both at the aggregate and the individual level, reciprocity is significantly stronger when strategic motivations can be ruled out. These findings suggest that intentions matter and, in particular, that models of intention-based reciprocity should take into account the nature of the motivations behind choices

This paper presented an experimental investigation of the hypothesis that the motivations driving an action matter for its perceived kindness and, as a consequence, for the reciprocal response to that action. In particular, we tested the hypothesis that, for a given distributional outcome, an action is perceived to be less kind if it is strategically motivated than if it is not strategically motivated. In order to test this hypothesis, we proposed a new experimental design, based on a symmetric gift-exchange game, that allows us to manipulate the beliefs of the first mover about the strategy space of the second mover. The results of the experiment indicate that when strategic motivations of the first mover can be ruled out, second movers’ responses are characterized by stronger positive reciprocity. This result holds for both strategy profiles and actual decisions. The results at the individual level indicate, in particular, that a larger fraction of the subjects display unconditional behavior when strategic motivations cannot be ruled out. These findings suggest several implications and directions for future research. First, at the theoretical level, concerns for fairness cannot be explained entirely by distributional factors. Intention-based reciprocity also matters. In particular, theoretical models of reciprocal behavior should take into account explicitly the type of motivation driving the action an agent is responding to. An action may elicit reciprocity differently depending on whether it is perceived as strategically motivated or not. At the empirical level, the perceived kindness of an action can be assessed not only on the basis of the strategy space of the first mover, but also on the beliefs of the first mover about the strategy space of the second mover. Second, our results can be interpreted as providing an inter-personal extension of the concept of motivational crowding-out (e.g. Deci and Ryan, 2000). Motivational crowding-out is defined as the reduction of effort in activities carried out for intrinsic motivation when an instrumental reward, typically monetary, is introduced.14 Several studies have documented the existence of motivational crowding-out (e.g. Cameron and Pierce, 1996, Eisenberger and Cameron, 1996, Deci et al., 2000 and Deci and Ryan, 2000).15 Self Determination Theory explains this phenomenon using the concept of control (Deci and Ryan, 1985): extrinsic reward is perceived as a form of control and, in intrinsically motivated people, it can reduce effort. Existing studies of motivational crowding-out have generally investigated differences in the behavior of one agent motivated by either intrinsic or extrinsic rewards. Our results indicate that the extrinsic motivation driving the action of an agent may have a crowding out effect on the intrinsically motivated economic behavior of another agent. A third implication is related to the power of disinterested philanthropy in eliciting reciprocity in helped people (Margalit, 1996): is free riding less strong when people are engaged in mutual advantageous actions (like contracts), or when the helped person feels disinterested motivation in her partner? In other words, in a “Samaritan dilemma” (Buchanan, 1975), does gratuity induce more or less reciprocity than a contract (without enforcement)? Our experiment suggests that disinterested gifts elicit more reciprocity. A final implication refers to interpersonal relationships, in particular within organizations. The literature on motivational crowding-out indicates that the introduction of extrinsic incentives in domains where intrinsic motivation are relevant can reduce effort and efficiency. If disinterested costly actions generate relatively more reciprocity, then it could be more efficient in workplaces, for instance, to manage interpersonal relations not only by means of contracts and incentives, but also to leave some room for gratuity as a way to stimulate reciprocity and, as a consequence, cooperation. This would apply, in particular, to those domains where stakeholders ask for intrinsic motivation, such as value-based organizations, the non-profit sector, or caring.