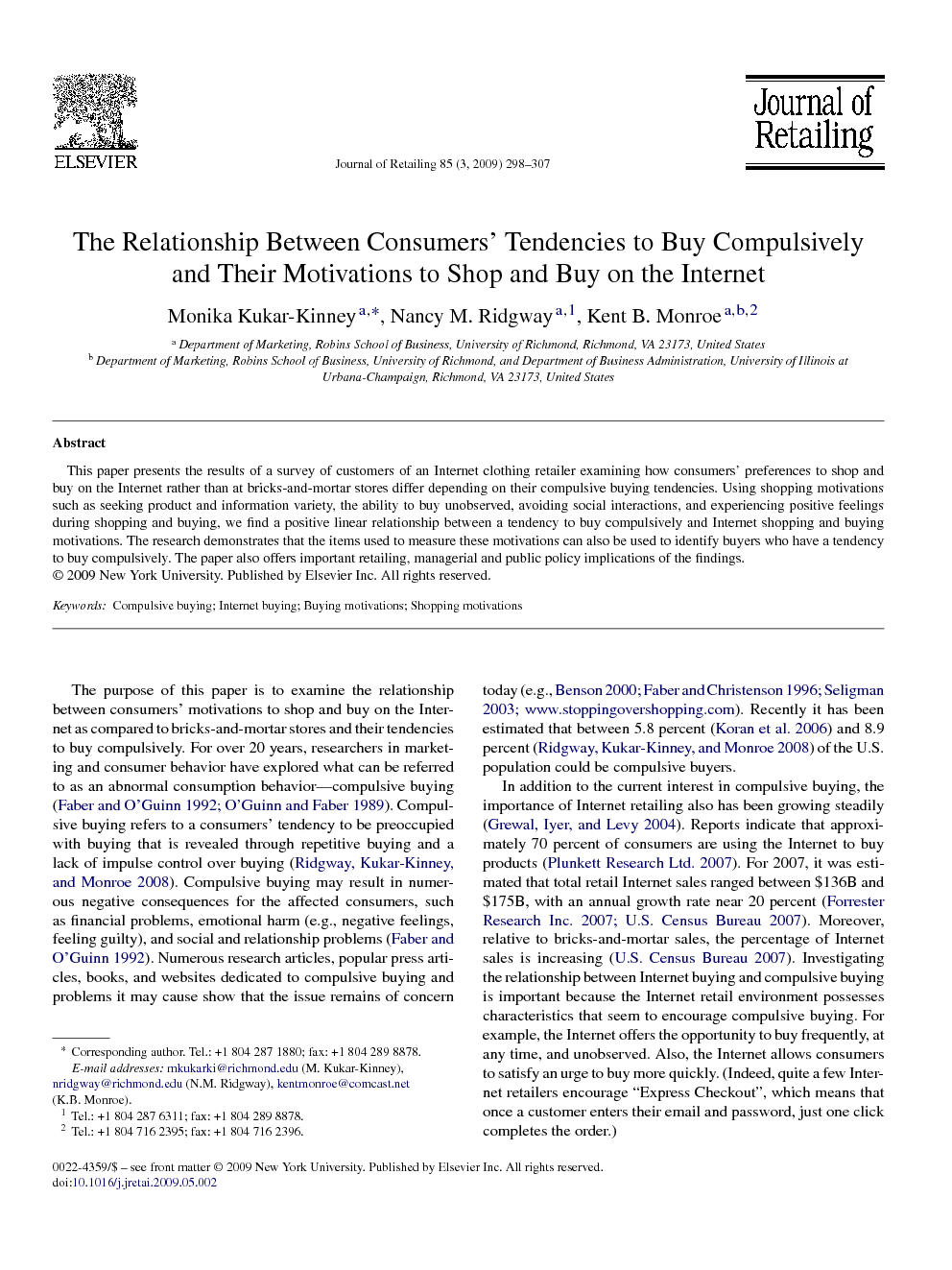 This paper presents the results of a survey of customers of an Internet clothing retailer examining how consumers’ preferences to shop and buy on the Internet rather than at bricks-and-mortar stores differ depending on their compulsive buying tendencies. Using shopping motivations such as seeking product and information variety, the ability to buy unobserved, avoiding social interactions, and experiencing positive feelings during shopping and buying, we find a positive linear relationship between a tendency to buy compulsively and Internet shopping and buying motivations. The research demonstrates that the items used to measure these motivations can also be used to identify buyers who have a tendency to buy compulsively. The paper also offers important retailing, managerial and public policy implications of the findings

Motivation has been defined as goal-directed arousal (Park and Mittal 1985). In the current context, the goal, and our focus, is restricted to consumer shopping or buying activities and motivations. The topic of shopping and buying motivations has been of interest in marketing research for some time. For example, several typologies have been developed for retail shopping motivations (Bellenger and Korgaonka, 1980, Moschis, 1976 and Westbrook and Black, 1985). Motives studied have included product-oriented motives, experiential motives (including the recreational and hedonic aspects of buying), shopping convenience, information search, recreational shopping, and variety seeking (Arnold and Reynolds, 2003, Darden and Ashton, 1975 and Dawson et al., 1990). One typology developed for Internet shoppers includes the convenience shopper, the variety seeker, the store-oriented shopper and the balanced buyer (Rohm and Swaminathan 2004). Recently, researchers found significant differences between Internet shoppers with utilitarian motives and hedonic motives (To, Liao, and Lin 2007). Similarly, Noble, Griffith, and Adjie (2006) compared information search, price comparison, uniqueness seeking, product assortment, convenience seeking, social interaction and browsing as Internet shopping motives. We selected the motivations used in this research based on Noble, Griffith, and Adjie (2006), to select the motivations used in this research. Further, to develop the hypotheses linking motivations with compulsive buying tendencies, we draw on previous research on compulsive buying (e.g., Dittmar and Drury, 2000, Faber and O’Guinn, 1992 and McElroy et al., 1994).