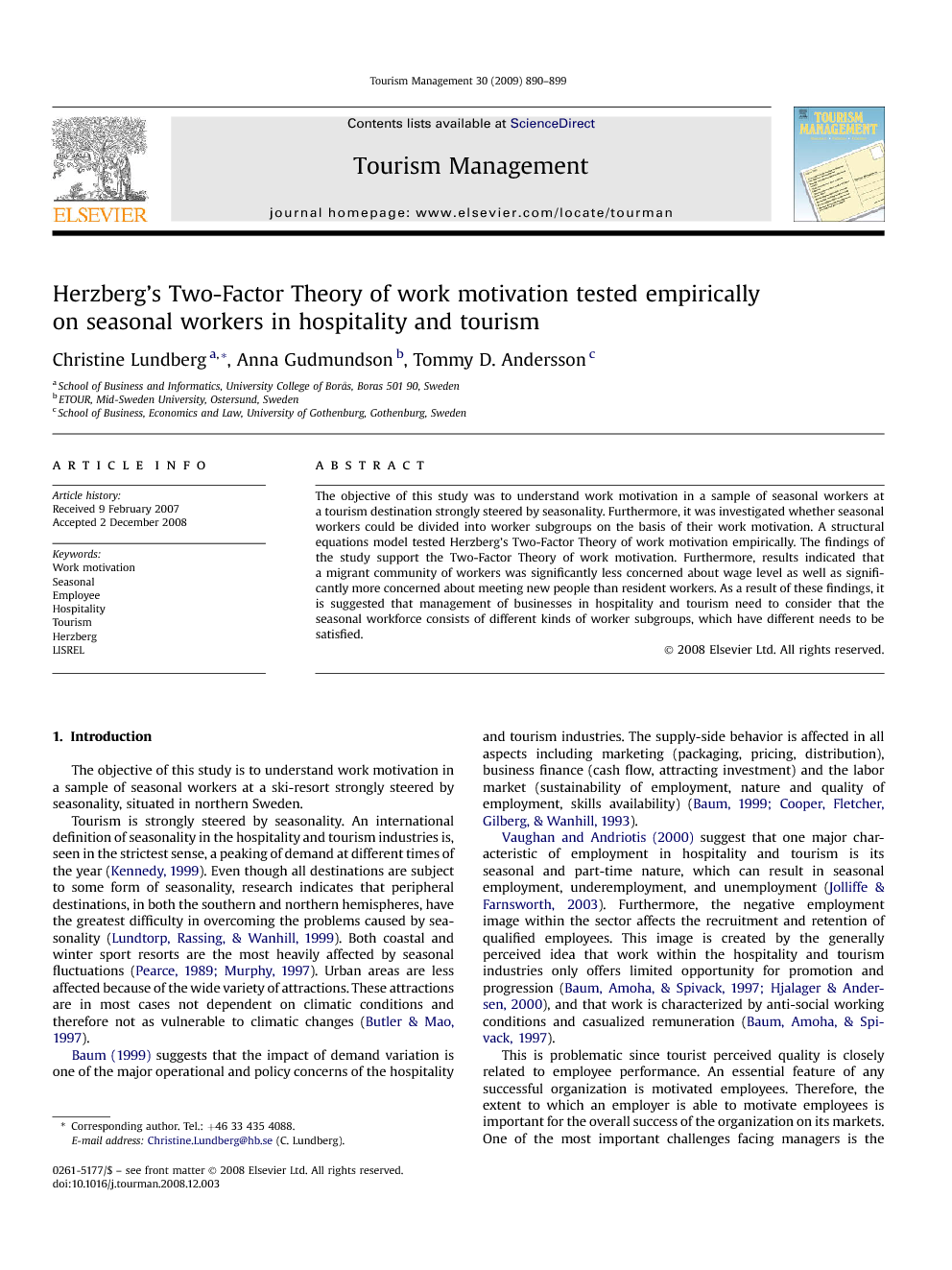 The objective of this study was to understand work motivation in a sample of seasonal workers at a tourism destination strongly steered by seasonality. Furthermore, it was investigated whether seasonal workers could be divided into worker subgroups on the basis of their work motivation. A structural equations model tested Herzberg's Two-Factor Theory of work motivation empirically. The findings of the study support the Two-Factor Theory of work motivation. Furthermore, results indicated that a migrant community of workers was significantly less concerned about wage level as well as significantly more concerned about meeting new people than resident workers. As a result of these findings, it is suggested that management of businesses in hospitality and tourism need to consider that the seasonal workforce consists of different kinds of worker subgroups, which have different needs to be satisfied.

The objective of this study is to understand work motivation in a sample of seasonal workers at a ski-resort strongly steered by seasonality, situated in northern Sweden. Tourism is strongly steered by seasonality. An international definition of seasonality in the hospitality and tourism industries is, seen in the strictest sense, a peaking of demand at different times of the year (Kennedy, 1999). Even though all destinations are subject to some form of seasonality, research indicates that peripheral destinations, in both the southern and northern hemispheres, have the greatest difficulty in overcoming the problems caused by seasonality (Lundtorp, Rassing, & Wanhill, 1999). Both coastal and winter sport resorts are the most heavily affected by seasonal fluctuations (Pearce, 1989 and Murphy, 1997). Urban areas are less affected because of the wide variety of attractions. These attractions are in most cases not dependent on climatic conditions and therefore not as vulnerable to climatic changes (Butler & Mao, 1997). Baum (1999) suggests that the impact of demand variation is one of the major operational and policy concerns of the hospitality and tourism industries. The supply-side behavior is affected in all aspects including marketing (packaging, pricing, distribution), business finance (cash flow, attracting investment) and the labor market (sustainability of employment, nature and quality of employment, skills availability) (Baum, 1999 and Cooper et al., 1993). Vaughan and Andriotis (2000) suggest that one major characteristic of employment in hospitality and tourism is its seasonal and part-time nature, which can result in seasonal employment, underemployment, and unemployment (Jolliffe & Farnsworth, 2003). Furthermore, the negative employment image within the sector affects the recruitment and retention of qualified employees. This image is created by the generally perceived idea that work within the hospitality and tourism industries only offers limited opportunity for promotion and progression (Baum et al., 1997 and Hjalager and Andersen, 2000), and that work is characterized by anti-social working conditions and casualized remuneration (Baum, Amoha, & Spivack, 1997). This is problematic since tourist perceived quality is closely related to employee performance. An essential feature of any successful organization is motivated employees. Therefore, the extent to which an employer is able to motivate employees is important for the overall success of the organization on its markets. One of the most important challenges facing managers is the creation of a context within which employees feel motivated and will act in order to achieve the goals of the organization. Managers may, by influencing the context, affect the degree of work motivation among the employees. Maybe nowhere is the understanding of employee work motivation more important than in a customer service oriented business such as the hospitality and tourism industries. Furthermore, it has been argued that seasonal workers within the industry can be divided into different subgroups on the basis of their attitudes towards seasonal jobs as well as their behavior as seasonal workers (Lee and Moreo, 2007, Lee-Ross, 1999a and Lee-Ross, 1999b) since employee work motivation varies between individuals, and individuals respond differently to the same motivational stimulus in different situations (Lee-Ross, 1999a). The individual differences of employees have important implications for managerial practice. Motivational theories are useful when studying the range of human motives to explain how the motives affect human behavior. However, the theories do not provide an insight of what motivates a particular individual or group. Therefore, when searching for the specific work motivators of a particular individual or group of individuals there is no other way than finding out what actually motivates that particular individual or group (Wright, 1989). In the light of the above, it is here argued that seasonal workers in hospitality and tourism constitute an important group with which to study work motivation. The aim of the study is to address the issue of how seasonal workers in hospitality and tourism are motivated in their work. This aim will be achieved through the following objectives: 1. To understand work motivation in a sample of seasonal workers by testing a context-adapted version of Herzberg's Two-Factor Theory of work motivation empirically by a structural equations model. 2. To investigate whether seasonal workers can be divided into worker subgroups on the basis of their work motivation.

In this study the objective was to understand work motivation in a sample of seasonal workers in hospitality and tourism and Herzberg's Two-Factor Theory of work motivation was tested empirically. The findings support Herzberg's Two-Factor Theory and show that it still has validity. The essence of Herzberg's Two-Factor Theory of work motivation, as understood in this study, is that work motivation is grounded in the satisfaction of ‘higher’ needs or ‘self fulfillment needs’ (Pinder, 1998) and not in more mundane needs such as wage level. This point is nicely brought out by the SEM model where ‘wage level’ and ‘rewards’ load on hygiene factors, which has a very weak and insignificant influence on work motivation. Out of the three manifest variables, ‘meeting new people’ loads strongest that further plays down the importance of monetary rewards to explain work motivation. Furthermore, the study investigated whether seasonal workers could be divided into workers subgroups on the basis of their work motivation. The answer to this question was positive. An interesting difference among seasonal workers is that ‘meeting new people’ is significantly more important for the migrant community than it is for their counterparts in the resident community. Another hygiene factor – wage level – was of greater importance to the resident community members than to those of the migrant community. This hints at a possible compensation between the two factors, that is ‘meeting new people’ seems to make up for a low wage level among the migrant community and vice versa for the resident community, which is less enchanted by meeting new people but more concerned about wage level. This relation is probably the reason why resident loads negatively on hygiene factors in the SEM model presented in Fig. 5. The negative sign indicates that for non-residents (migrants) hygiene factors, and particularly ‘meeting new people’, are more important. This line of reasoning corresponds well with deLeon and Taher's (1996) findings that extrinsic rewards (i.e. hygiene factors) are of two types: organizational (e.g. pay, working conditions) and social (e.g. friendship, dealing with others). The growth factors were measured by the following manifest variables: responsibility, information, feedback, knowledge and training. It was found that feedback and responsibility, to the greatest extent, had an effect on work motivation. Information, knowledge and training had a lesser impact on work motivation, when comparing the components of the construct growth factors. However, it should be emphasized that all of these components were of significant importance for the enhancement of work motivation among the seasonal workers. Consequently, the seasonal workers’ work motivation is derived from intrinsic rewards when experiencing self-control in their work situation. Based on the in-depth interviews, special focus was set on the importance of social factors. One of the conclusions that was made, was that there were differences between the two worker subgroups as regards what made the workers enjoy their jobs. Migrant workers tended to live in occupational communities (Lee-Ross, 1999b). Findings indicated that the members of the migrant community defined themselves as seasonal workers and that their present self-image was based on their occupational role as seasonal workers. It was also found that members of the migrant community shared attitudes, viewpoints and values as regards, for example, their view of work and leisure. They also often had work-based friends, which they spent most of their waking hours together with and shared interest and hobbies together with. This may also be a result of the fact that the members of the migrant community also lived together. These findings support Lee-Ross’ (1999b) argument that staff residency plays an important role in the formation of informal work groups. Members of the migrant community described their relationship with co-workers as very close and that they, in some cases, were like a family away from home. There was a strong sense of camaraderie and inter-group support within the migrant community based on both leisure and non-work activities (i.e. a fusion of work and leisure time) and team working at their place of work. The results also support Lee-Ross (1999b, p. 239) findings that seasonal work is characterized by “job importance is replaced by work situations characterized by hedonism and close social bonding”. Based on the conclusions from the in-depth interviews, the issue of ‘occupational community’ was brought into the model. This was made through the manifest variable indicating whether a seasonal worker was registered as a year around inhabitant in the region or not. The result was a better fit of the model, but the results did not indicate significant influences from the variable resident, neither on work motivation nor on hygiene factors. This is further supported by a simple comparison (Table 3) of answers given to Likert-scale questions regarding work motivation, where there were no differences regarding how the two worker subgroups were motivated in their work. The clear evidence of how worker subgroup influences work motivation contributes to our understanding of how individual variations apply to the theory. The need for more evidence on how well the theory applies to individual variations like gender, culture and age categories not to mention organizational differences has been pointed out by Furnham, Forde, and Ferrari (1999). These results also shed light on how individual differences of needs and values explain work motivation which is an issue that the Two-Factor Theory has been criticized for not taking into consideration (Parsons and Broadbride, 2006 and Tietjen and Myers, 1998).