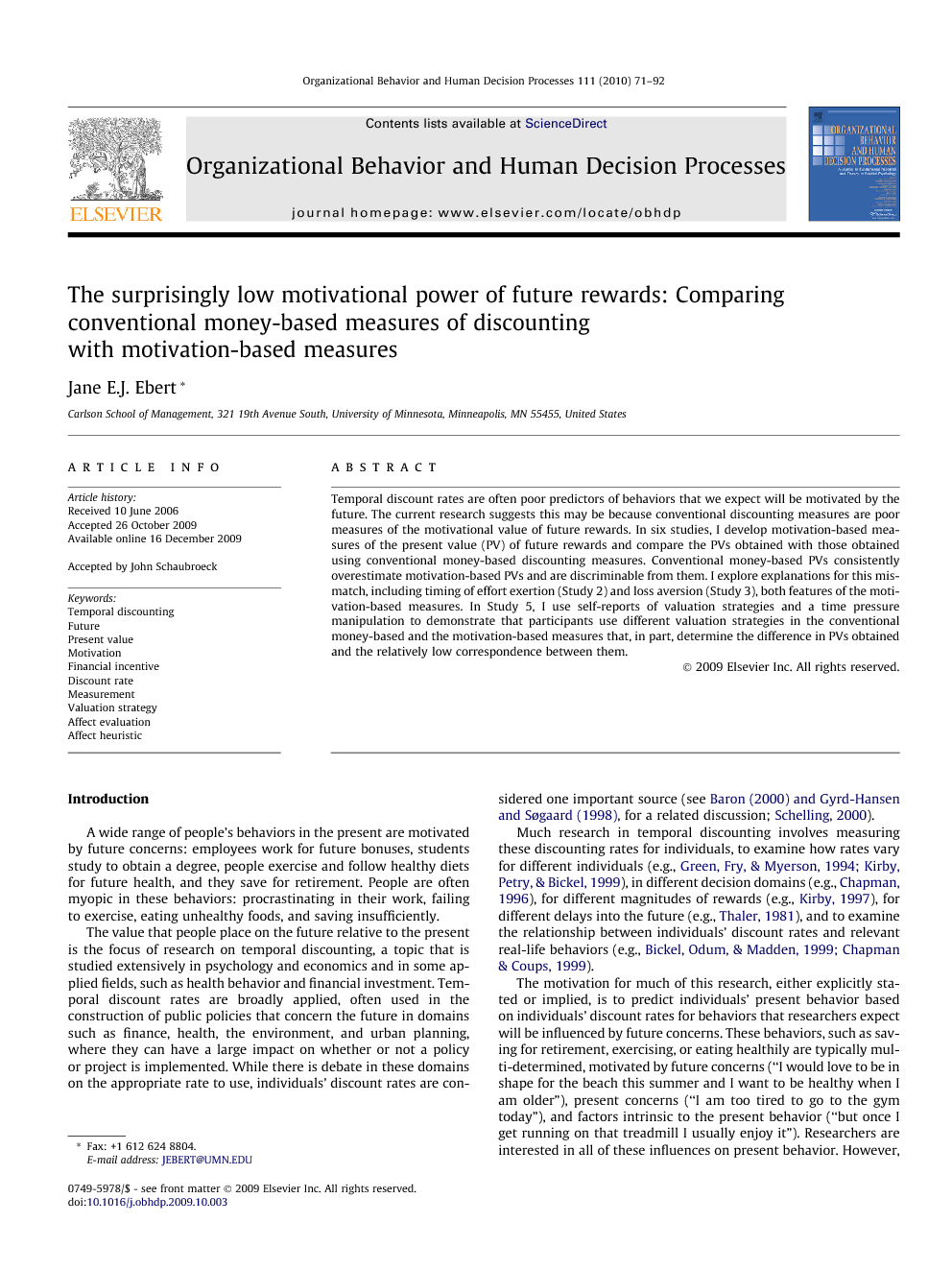 Temporal discount rates are often poor predictors of behaviors that we expect will be motivated by the future. The current research suggests this may be because conventional discounting measures are poor measures of the motivational value of future rewards. In six studies, I develop motivation-based measures of the present value (PV) of future rewards and compare the PVs obtained with those obtained using conventional money-based discounting measures. Conventional money-based PVs consistently overestimate motivation-based PVs and are discriminable from them. I explore explanations for this mismatch, including timing of effort exertion (Study 2) and loss aversion (Study 3), both features of the motivation-based measures. In Study 5, I use self-reports of valuation strategies and a time pressure manipulation to demonstrate that participants use different valuation strategies in the conventional money-based and the motivation-based measures that, in part, determine the difference in PVs obtained and the relatively low correspondence between them.

A wide range of people’s behaviors in the present are motivated by future concerns: employees work for future bonuses, students study to obtain a degree, people exercise and follow healthy diets for future health, and they save for retirement. People are often myopic in these behaviors: procrastinating in their work, failing to exercise, eating unhealthy foods, and saving insufficiently. The value that people place on the future relative to the present is the focus of research on temporal discounting, a topic that is studied extensively in psychology and economics and in some applied fields, such as health behavior and financial investment. Temporal discount rates are broadly applied, often used in the construction of public policies that concern the future in domains such as finance, health, the environment, and urban planning, where they can have a large impact on whether or not a policy or project is implemented. While there is debate in these domains on the appropriate rate to use, individuals’ discount rates are considered one important source (see Baron, 2000 and Gyrd-Hansen and Søgaard, 1998, for a related discussion; Schelling, 2000). Much research in temporal discounting involves measuring these discounting rates for individuals, to examine how rates vary for different individuals (e.g., Green et al., 1994 and Kirby et al., 1999), in different decision domains (e.g., Chapman, 1996), for different magnitudes of rewards (e.g., Kirby, 1997), for different delays into the future (e.g., Thaler, 1981), and to examine the relationship between individuals’ discount rates and relevant real-life behaviors (e.g., Bickel et al., 1999 and Chapman and Coups, 1999). The motivation for much of this research, either explicitly stated or implied, is to predict individuals’ present behavior based on individuals’ discount rates for behaviors that researchers expect will be influenced by future concerns. These behaviors, such as saving for retirement, exercising, or eating healthily are typically multi-determined, motivated by future concerns (“I would love to be in shape for the beach this summer and I want to be healthy when I am older”), present concerns (“I am too tired to go to the gym today”), and factors intrinsic to the present behavior (“but once I get running on that treadmill I usually enjoy it”). Researchers are interested in all of these influences on present behavior. However, I suggest that research on temporal discount rates has been focused on understanding the first of these, the motivational power of future concerns for present behavior, but that it commonly uses measures that do a poor job of assessing motivational power. Good measures of constructs should satisfy a number of criteria. In particular they should be valid, reliable, and sensitive (Cook and Campbell, 1979 and Cronbach and Meehl, 1955). I suggest that the methods conventionally used to measure individuals’ discount rates mean that the discount rates obtained are likely to be inaccurate, and therefore invalid, measures of the motivational power of the future in the present. Specifically, I suspect that conventional discount rate measures are likely: (1) to overestimate the motivational power of the future for individuals and (2) to be discriminable from measures of the motivational power of the future, showing relatively low correlations with those measures. These are the hypotheses examined in the present research.