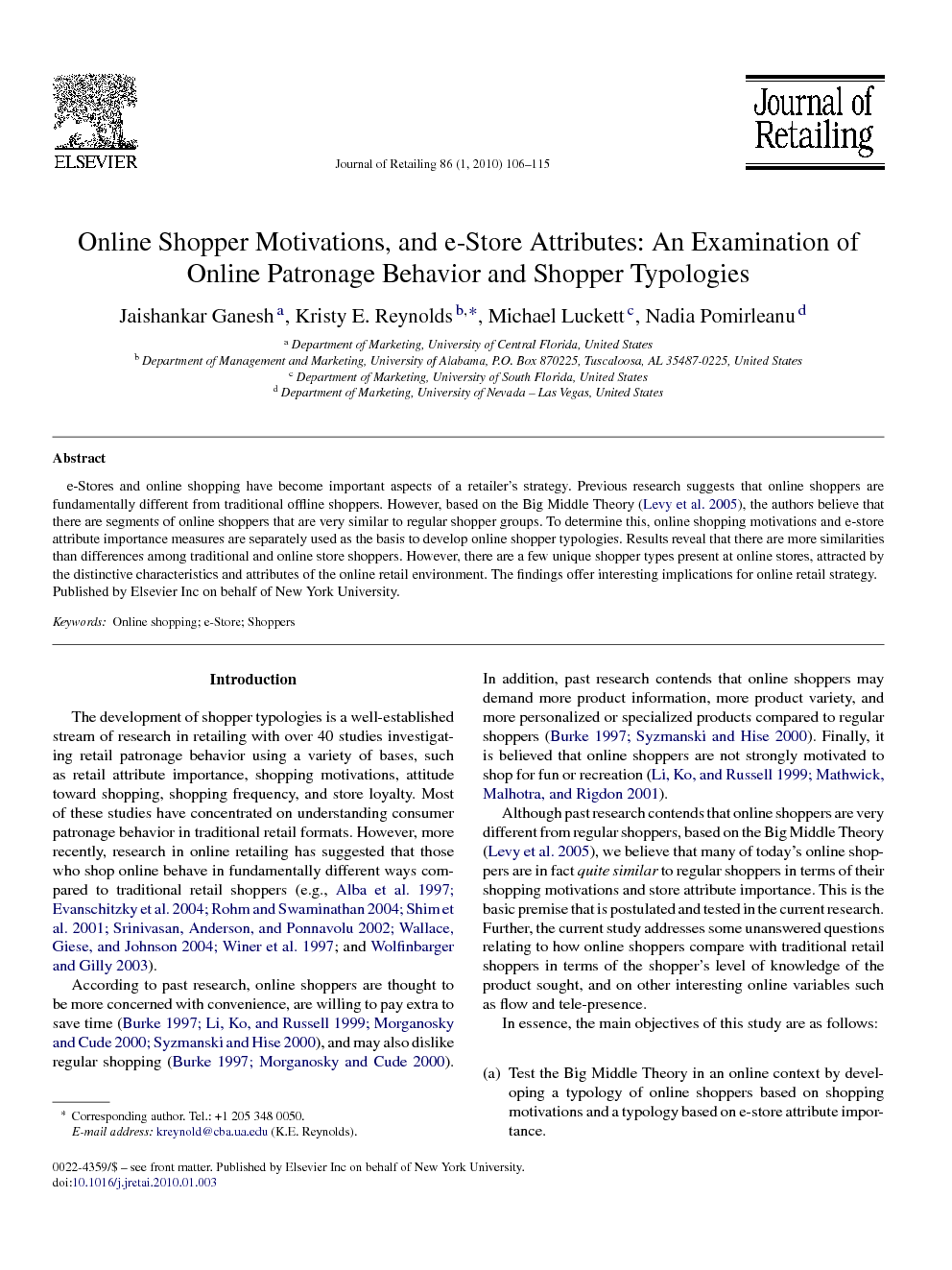 e-Stores and online shopping have become important aspects of a retailer's strategy. Previous research suggests that online shoppers are fundamentally different from traditional offline shoppers. However, based on the Big Middle Theory (Levy et al. 2005), the authors believe that there are segments of online shoppers that are very similar to regular shopper groups. To determine this, online shopping motivations and e-store attribute importance measures are separately used as the basis to develop online shopper typologies. Results reveal that there are more similarities than differences among traditional and online store shoppers. However, there are a few unique shopper types present at online stores, attracted by the distinctive characteristics and attributes of the online retail environment. The findings offer interesting implications for online retail strategy.

The development of shopper typologies is a well-established stream of research in retailing with over 40 studies investigating retail patronage behavior using a variety of bases, such as retail attribute importance, shopping motivations, attitude toward shopping, shopping frequency, and store loyalty. Most of these studies have concentrated on understanding consumer patronage behavior in traditional retail formats. However, more recently, research in online retailing has suggested that those who shop online behave in fundamentally different ways compared to traditional retail shoppers (e.g., Alba et al., 1997, Evanschitzky et al., 2004, Rohm and Swaminathan, 2004, Shim et al., 2001, Srinivasan et al., 2002, Wallace et al., 2004 and Winer et al., 1997; and Wolfinbarger and Gilly 2003). According to past research, online shoppers are thought to be more concerned with convenience, are willing to pay extra to save time (Burke, 1997, Li et al., 1999, Morganosky and Cude, 2000 and Syzmanski and Hise, 2000), and may also dislike regular shopping (Burke, 1997 and Morganosky and Cude, 2000). In addition, past research contends that online shoppers may demand more product information, more product variety, and more personalized or specialized products compared to regular shoppers (Burke, 1997 and Syzmanski and Hise, 2000). Finally, it is believed that online shoppers are not strongly motivated to shop for fun or recreation (Li et al., 1999 and Mathwick et al., 2001). Although past research contends that online shoppers are very different from regular shoppers, based on the Big Middle Theory (Levy et al. 2005), we believe that many of today's online shoppers are in fact quite similar to regular shoppers in terms of their shopping motivations and store attribute importance. This is the basic premise that is postulated and tested in the current research. Further, the current study addresses some unanswered questions relating to how online shoppers compare with traditional retail shoppers in terms of the shopper's level of knowledge of the product sought, and on other interesting online variables such as flow and tele-presence. In essence, the main objectives of this study are as follows: (a) Test the Big Middle Theory in an online context by developing a typology of online shoppers based on shopping motivations and a typology based on e-store attribute importance. (b) To compare these online shopper typologies with those identified in traditional retail formats using similar measures (shopping motivations and store attribute importance). (c) To profile these online shopper segments on patronage behavior. The theoretical rationale behind using shopping motivations and store attribute importance is well documented in the literature (e.g., Bellenger et al., 1977, Bellenger and Korgaonkar, 1980, Ganesh et al., 2007 and Westbrook and Black, 1985). The online shopper segments found here are compared to the shopper subgroups found in the literature dealing with traditional retail formats.

The results of this study suggest the following: (a) Using shopping motivation measures, seven shopper segments are found for online stores. (b) Using e-store attribute importance measures, six segments are found for online stores. (c) The five common shopper types found in previous research that focused on traditional retail formats are also present in the online environment. (d) There are three shopper subgroups that are unique to the online shopping environment—e-window shoppers, interactive shoppers, and risk averse shoppers. Overall, the findings support the study's research proposition and offer some interesting implications to academics and practitioners. The current study advances our knowledge in the area of online retailing by: (a) testing the Big Middle Theory in an online context; (b) designing, testing, and validating a scale of online shopping motivations, and e-store attribute importance; (c) identifying the shopper subgroups that are present in an online context; and (d) providing a means of comparing traditional shopper types with online shopper types. In total, based on both attribute importance and online shopping motivations, eight shopper types were identified at e-stores, five of which are similar to those found at traditional formats, and three of them that are unique to the web. Most of the existing research on online shopping has predominantly focused on differences in behavior exhibited by online shoppers when compared to traditional retail shoppers (e.g., Alba et al., 1997, Li et al., 1999, Mathwick et al., 2001 and Winer et al., 1997) and on reasons why consumers prefer to shop online (e.g., Burke, 1997, Li et al., 1999, Morganosky and Cude, 2000 and Syzmanski and Hise, 2000). Primary factors identified by past research as important discriminators of online and traditional retail shopping include: (a) convenience (Chiang and Dholakai, 2003 and Donthu and Garcia, 1999), (b) perceived risk (Forsythe and Shi, 2003, Garbarino and Strahilevitz, 2004 and Lee and Tan, 2003), (c) ability to search for information and products (Chiang and Dholakai 2003), and (d) price (Donthu and Garcia 1999). The current study, however, shows that online shoppers are in fact more similar to traditional shoppers than they are different. The prediction of the Big Middle Theory regarding the existence of a core group of shoppers seeking a consistent set of retail attributes is supported by the findings here. One implication of present research is that it identifies factors that serve as a common denominator and not a differentiator between online and offline shoppers. Businesses with both online and offline presence are thus provided with parsimonious tools to address common bases of shoppers. This will help maintain and promote a unified brand image while undertaking more efficient segment strategies. The presence of similar shopping motivation dimensions and attribute importance factors in both online and traditional formats suggests that these are the core factors that influence shopping irrespective of formats. Any new or existing competition in the retail landscape needs to address these common issues in sufficient depth so as to be able to attract and retain the common shopper types. Another interesting finding of this study is the presence of motivation dimensions, attribute importance factors, and the associated shopper types that are unique to the online format. These factors redefine the competitive landscape and add an element of sustainable advantage to online stores. For example, although earlier we drew a parallel between web shopping convenience and Choice Optimization, the items that comprise the web shopping convenience dimension (such as “Shopping from home,” “Shopping any time of day or night,” “Avoiding crowds,” “Not having to travel from store to store”) seem to redefine the concept of convenience and shopping optimization. These are items that the traditional formats cannot easily replicate. The findings of this study suggest that, among possible others, points of distinction for e-stores are (a) interactivity and the ability to offer personalized services; (b) their ability to redefine convenience; and (c) their ability to control their website content. For example, the online unit of Ritz Cameras, Inc. and the online retailer Horchow both use live online chat to give customers immediate advice and feedback regarding products featured at their online stores. Nike and Nintendo offer several interesting and captivating games and challenges at their website that can potentially induce flow. Pottery Barn offers a “floor plan” layout on its Web site that allows shoppers to virtually browse from room to room to view products. From a theoretical point of view it is important to offer an explanation for the discovery of differences in shopper typologies between consumers of traditional versus online retail formats. The theory of disruptive innovation offers a strong foundation for this. A disruptive innovation is defined as an advancement (e.g., social, technological or both) which allows Innovative newcomers to leverage technology to alter traditional business models. These disruptive innovations offer new business models that fundamentally alter the economics of an industry. When applied to the retailing industry, the Internet has been characterized as the most recent disruptive innovation (Christensen and Tedlow 2000). Given the ever-present tradeoffs between content, speed, and ease of navigation, the findings here provide some preliminary indications as to (a) which type of products and which type of customers would benefit from a content-rich site; (b) use of personalization services (e.g., Amazon.com) real time customer service agents (e.g., Lands End, Ritz Camera, Horchow) or both as a competitive tool; and (c) the ability to attract and keep first time buyers and other Risk Averse shoppers by addressing safety and security concerns and providing physical store contacts for returns.