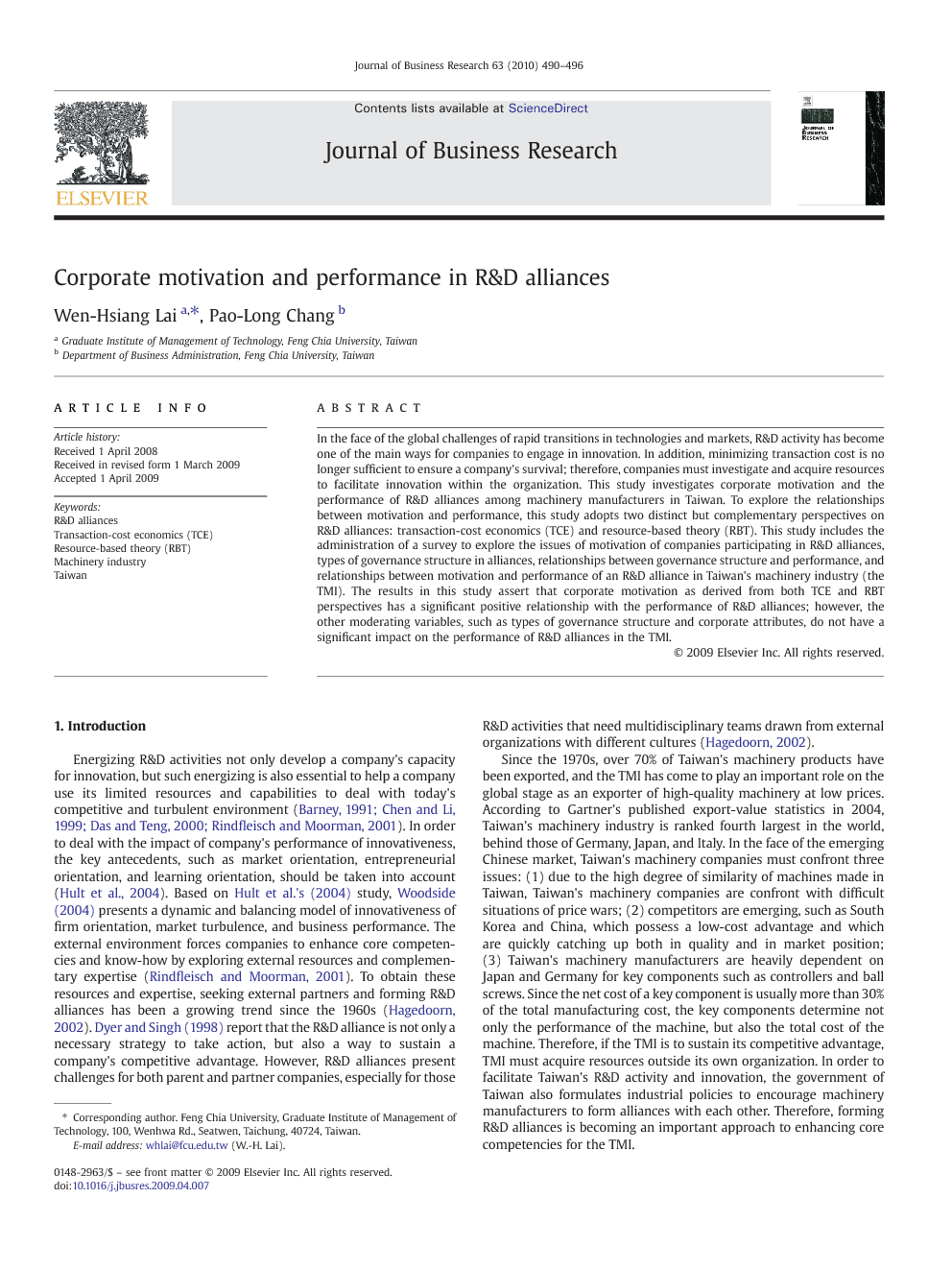 In the face of the global challenges of rapid transitions in technologies and markets, R&D activity has become one of the main ways for companies to engage in innovation. In addition, minimizing transaction cost is no longer sufficient to ensure a company's survival; therefore, companies must investigate and acquire resources to facilitate innovation within the organization. This study investigates corporate motivation and the performance of R&D alliances among machinery manufacturers in Taiwan. To explore the relationships between motivation and performance, this study adopts two distinct but complementary perspectives on R&D alliances: transaction-cost economics (TCE) and resource-based theory (RBT). This study includes the administration of a survey to explore the issues of motivation of companies participating in R&D alliances, types of governance structure in alliances, relationships between governance structure and performance, and relationships between motivation and performance of an R&D alliance in Taiwan's machinery industry (the TMI). The results in this study assert that corporate motivation as derived from both TCE and RBT perspectives has a significant positive relationship with the performance of R&D alliances; however, the other moderating variables, such as types of governance structure and corporate attributes, do not have a significant impact on the performance of R&D alliances in the TMI.

This study adopts two perspectives of theories—TCE and BRT to investigate the relationships between motivations for and performance of R&D alliances. This study finds that except for behavioral uncertainty, the motivations examined do not have a significant influence on a company's decision regarding research-alliance governance structure. This situation may be created by the unique characteristics of the TMI, and the connections of machinery manufacturing companies in Taiwan are strong to their own social networks. For those SMEs in the TMI, the atmosphere within the company is the most important and influential consideration when cooperating with other companies. Therefore, motivations associated with transaction-specific assets, resources, and technology characteristics do not apparently impact a company's decision on research-alliance governance structure. On the other hand, social networks play a major role in the TMI, and companies are usually inclined to collaborate with familiar partners who are within the company's social network. It is also important that 82.1% of the sample companies had selected the non-equity type of research-alliance governance structure. Since most of these companies are SMEs, it is obvious that SMEs in the TMI have intentions to keep themselves flexible and assume limited risks. Given the characteristics of SMEs, the non-equity type of governance structure meets their needs for flexibility and limited exposure to risk. In terms of the relationship between motivations and performance, this study also finds that uncertainties and resources do not have an obvious influence on performance. It is possible that since the fluctuation in export value of the products of the TMI is not turbulent, the external environment of the TMI is more stable than that of other industries. Furthermore, most R&D alliances in the TMI are horizontal alliances, in which companies contribute similar resources to the alliance. From the viewpoint of RBT, it is hard to create innovative and value-added inventions in this environment, and therefore it is more difficult to improve performance. However, the motivations associated with transaction-specific assets and technology characteristics apparently do affect performance. For machinery industries, the employees' experiences and know-how are critical to the machine's performance. R&D alliances are an emerging issue in the TMI, and most of the companies have less experiences in R&D alliances. Also, one of the characteristics of Taiwan's machinery manufacturing companies is that the connections within the TMI companies are strong to social networks. Therefore, future research should further examine the motivations for R&D alliances from the perspective of social networks and investigate the interplay of these motivations. Such work will greatly deepen our understanding of the formation and evolution of R&D alliances in the TMI.