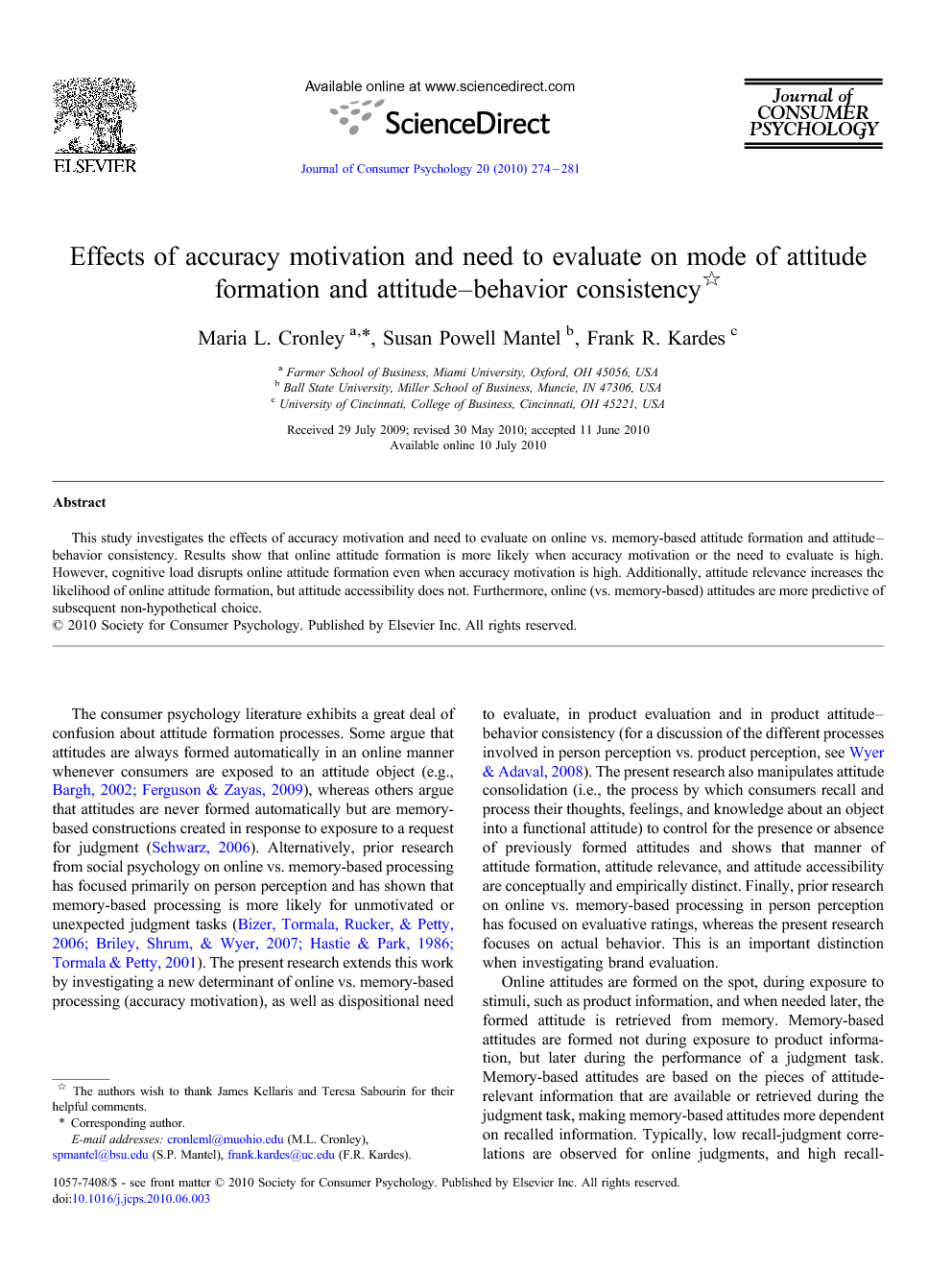 Numerous studies have used response latency to measure online and memory-based judgments (e.g., Bizer et al., 2006). Because online attitudes are formed during encoding, reporting of previously formed judgments is relatively quick. Memory-based judgments take longer to report because the individual must recall, evaluate, and integrate relevant pieces of information. To test for online vs. memory-based attitude formation, the design of Experiment 1 relies on the two-step response latency method developed by Fazio, Herr, and Powell (1984; see also Kardes, Cronley, & Kim, 2006). Half of the participants are led to consolidate their responses, feelings, and knowledge about the attitude object using a standard paper-and-pencil measurement task and half are not. Next, a computer-administered task is used to measure response latencies to attitudinal inquiries. If the attitude was formed online, response latencies are equally fast regardless of the consolidation manipulation. If the attitude was memory-based, response latencies are faster in consolidation than in no-consolidation conditions. In Experiment 1a, 160 research participants were randomly assigned to conditions in a 2 (high vs. low accuracy motivation) × 2 (consolidation vs. no consolidation) × 2 (peripheral cue: celebrity vs. non-celebrity endorser) mixed design with need to evaluate included as a continuous variable. In Experiment 1b, 160 research participants were randomly assigned to conditions in a 2 (high vs. low cognitive load) × 2 (consolidation vs. no consolidation) × 2 (peripheral cue: high vs. low website popularity) mixed design including the continuous variable need to evaluate. As expected, the route to persuasion was influenced by motivation and ability. That is, the peripheral cue influenced brand attitudes only when motivation was low or cognitive load was high.3 Two ads were used in Experiment 1a (Breathe Right Clear Nose Strips and Kitchen Aid Stand Mixer) and in Experiment 1b (PayPal.com and NewJob.com).4 No brand-specific main effects or interactions were found (all t's < 1), so the data were pooled across ads.

Some prominent attitude researchers argue that all attitudes are formed automatically in an online manner whenever an attitude object is encountered (Bargh, 2002, September and Ferguson and Zayas, 2009), whereas others argue that all attitudes are constructed in a memory-based manner whenever attitude scales are encountered (Schwarz, 2006). Our results suggest that online attitude formation is more likely to occur when attitudes are expected to be functional due to high levels of accuracy motivation or the need to evaluate. Memory-based attitudes are more likely to be formed when processing goals downplay the utility of possessing evaluative judgments or when cognitive load disrupts the evaluative judgment formation process. That is, attitude relevance increases the likelihood of online attitude formation, but attitude accessibility does not. This occurs because functionality is a more important determinant of the manner of attitude formation, relative to ease. This result is surprising because several theoretical formulations suggest that ease should be more important than functionality (Gilbert, 1991, Kahneman, 2003 and Stanovich and West, 2000). The results also show that functional online attitudes are more likely to influence choice, but memory-based attitudes are more likely to exert little or no influence on choice. The latter finding, however, was qualified by the influence of the consolidation manipulation. Consolidated attitudes, formed prior to the choice task, influence choice even when they are formed in a memory-based manner. This result suggests that the experience of retrieving previously formed attitudes from memory increases confidence in the utility of the attitudes and increases their impact on subsequent behavior. This finding is also important because it deals with non-hypothetical choice, rather than just evaluative ratings. Baumeister, Vohs, and Funder (2007) argue that too many studies focus on ratings, rather than choice. This is an important distinction when investigating brand evaluation. The results also show that attitudes formed at different points in time are based on different types of information. Attitudes that are likely to be formed online are influenced by information available during stimulus presentation and these attitudes are more likely to exert a powerful influence on choice. Conversely, attitudes that are likely to be memory-based show weaker attitude–behavior correspondence and are more susceptible to the influence of contextual cues available during choice. These finding can be very important to the marketer in evaluating how to communicate with the potential consumer. For example, some manufacturers pay a premium to place their advertisement in proximity of an article or news story that references the product category. The idea being that the article or news story will prime the category and make processing of the advertisement easier—thus producing central route processing and more thoughtful attitude formation. This research suggests that priming of the category may make the processing easier and encourage brand-based information to be stored in memory but the consumer is no more likely to form an attitude about the product unless they see the product as relevant. Further, without a preformed attitude, choice is unlikely to be correlated with attitudes that are formed later. Therefore, manufacturers may want to reconsider paying a premium to place the advertisement in proximity to a category reference and instead focus on making the product relevant to the viewer. Finally, manipulating consolidation and measuring response latencies provides consumer researchers with a useful tool for investigating the influence of other variables on the manner of attitude formation. For example, thought-provoking ad executions, such as comparative advertising (Dröge, 1989), mystery ads (Fazio, Herr, & Powell, 1992), self-referencing ads (Escalas, 2007), and ads using rhetorical questions (Ahluwalia & Burnkrant, 2004) might prompt online attitude formation. Manipulating consolidation and measuring response latencies enables consumer researchers to investigate topics that cannot be investigated through the use of standard attitude scales. One limitation of the study is that we cannot say unequivocally that no attitude or evaluation of any sort is made under conditions where memory-based processing is likely to have occurred, specifically under conditions of low accuracy motivation and low need to evaluate or under conditions of high cognitive load. However, the pattern of results reported suggests that online attitude formation is more likely when perceived functionality is high and cognitive load is low. While we did not directly manipulate or force online attitude formation, we did show significantly different response latencies and significant differences in recall–attitude correlations across conditions. This pattern of results is consistent with the hypothesized difference in timing of attitude formation.