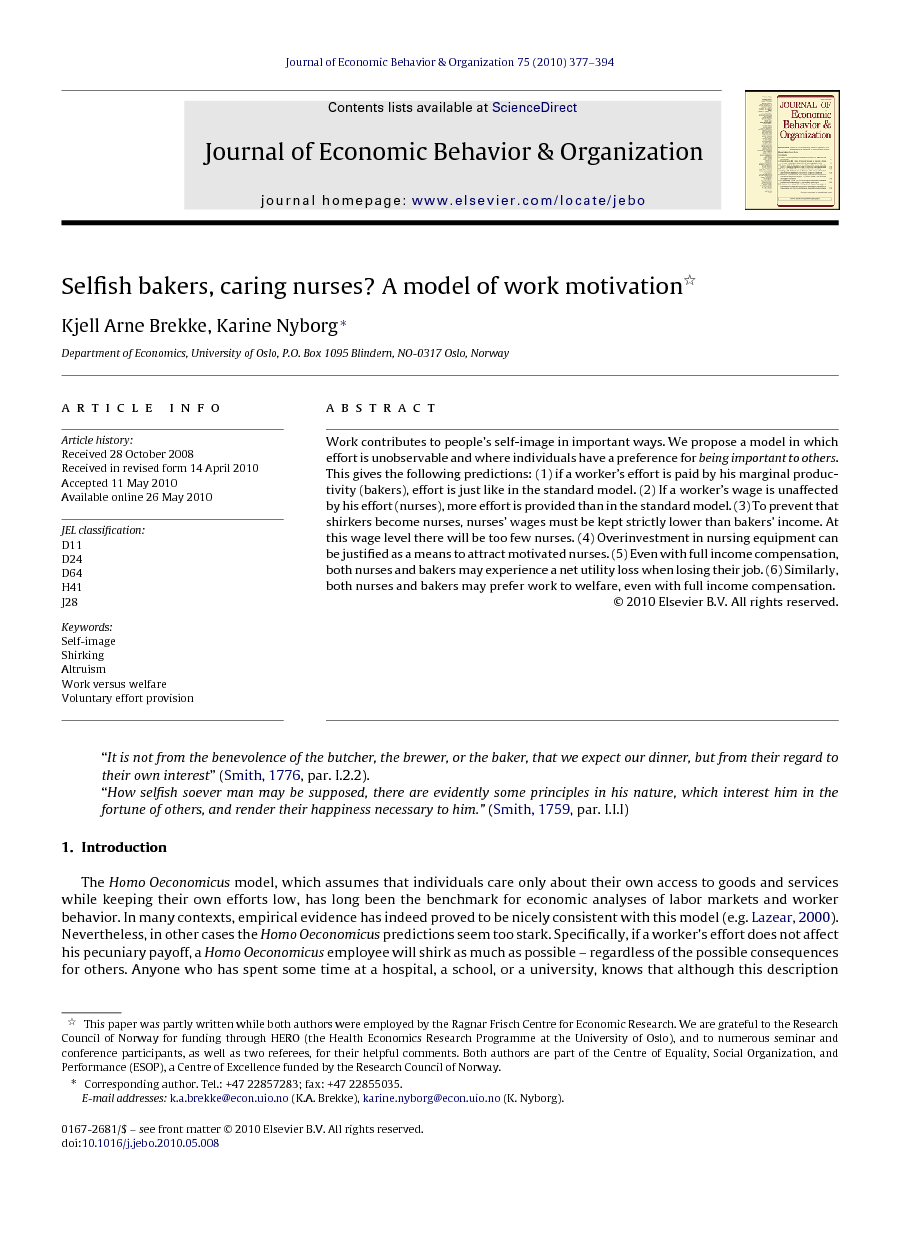 Work contributes to people’s self-image in important ways. We propose a model in which effort is unobservable and where individuals have a preference for being important to others. This gives the following predictions: (1) if a worker’s effort is paid by his marginal productivity (bakers), effort is just like in the standard model. (2) If a worker’s wage is unaffected by his effort (nurses), more effort is provided than in the standard model. (3) To prevent that shirkers become nurses, nurses’ wages must be kept strictly lower than bakers’ income. At this wage level there will be too few nurses. (4) Overinvestment in nursing equipment can be justified as a means to attract motivated nurses. (5) Even with full income compensation, both nurses and bakers may experience a net utility loss when losing their job. (6) Similarly, both nurses and bakers may prefer work to welfare, even with full income compensation.

Above, we have formalized the idea that work is not only motivated by its monetary compensation, but also by a desire to be important to other people. We have shown that with lump-sum taxation, the desire to be important does not change the effort of workers receiving performance pay (bakers); it does, however, change the effort of those whose performance cannot be efficiently monitored and who thus are not paid according to their marginal productivity (nurses). Moreover, it affects behavior in both groups when it comes to the choice (whenever such a choice is available) between working and living off welfare: many individuals, including both bakers and nurses, will prefer to work even if welfare payments provide full income compensation. With the preference structure proposed above, nursing jobs – or rather, jobs where effort is not paid according to its marginal productivity – may be attractive for two very different reasons: they provide the opportunity to shirk, but also the opportunity to be important. Thus, unless nurses’ wage is kept strictly lower than wages in the baking sector (i.e. the sector where effort is paid by its marginal productivity), shirkers will be attracted to the nursing sector. If the wage is kept low enough to keep shirkers out, however, the public sector will be suboptimally small. One way to improve on this situation is to increase nurses’ social productivity through fixed capital investments. The easier it is for nurses to do a good job, the more attractive will the nursing profession be – but only for those who really want to do a good job. This argument provides a rationale for overinvestment in certain types of public good production capital, such as libraries in schools and universities, or diagnostic equipment in hospitals. Our model also provides one possible explanation for the detrimental effects of unemployment. Workers’ self-image loss when losing their job is not necessarily compensated by the decreased cost of effort. In fact, we show that in the case of full income compensation through unemployment benefits, every nurse would become weakly worse off if losing her job; the highly motivated bakers experience a net loss, while only the poorly motivated bakers can gain. The type of work motivation modelled here depends on the individuals’ perception of how important her effort is to others, not whether the firm she works in is publicly or privately owned, whether it is a profit or non-profit firm, or whether the worker herself has strong preferences for the good she produces. The crucial distinction between what we have called the “baking” and “nursing” sectors is that individual effort and/or productivity can be monitored in the former, but not in the latter sector. Interpretations of these two sectors as private and public, or profit and non-profit, are thus only valid to the extent that effort is more easily observable in private than in the public sector, or more so in profit than non-profit firms. Finally, our model of work motivation has been presented in terms of an exogenously fixed, internalized moral norm. Over time, such norms may be eroded or strengthened, depending, for example, on others’ behavior and the relative payoffs of available alternatives (see, for example, Lindbeck et al., 1999). While outside the scope of the present paper, integrating such dynamic aspects with our approach would be an interesting topic for future research.