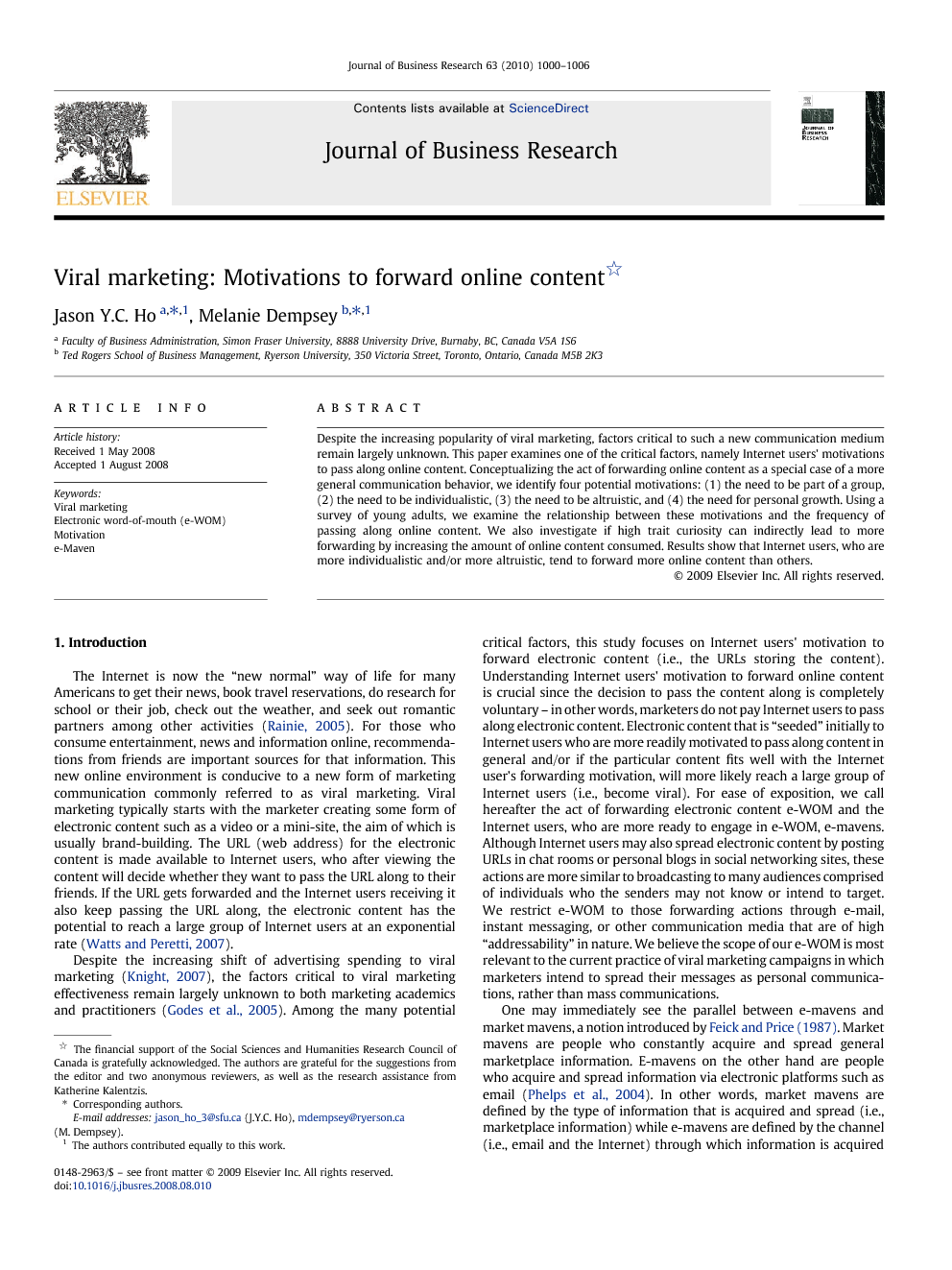 Despite the increasing popularity of viral marketing, factors critical to such a new communication medium remain largely unknown. This paper examines one of the critical factors, namely Internet users' motivations to pass along online content. Conceptualizing the act of forwarding online content as a special case of a more general communication behavior, we identify four potential motivations: (1) the need to be part of a group, (2) the need to be individualistic, (3) the need to be altruistic, and (4) the need for personal growth. Using a survey of young adults, we examine the relationship between these motivations and the frequency of passing along online content. We also investigate if high trait curiosity can indirectly lead to more forwarding by increasing the amount of online content consumed. Results show that Internet users, who are more individualistic and/or more altruistic, tend to forward more online content than others.

The Internet is now the “new normal” way of life for many Americans to get their news, book travel reservations, do research for school or their job, check out the weather, and seek out romantic partners among other activities (Rainie, 2005). For those who consume entertainment, news and information online, recommendations from friends are important sources for that information. This new online environment is conducive to a new form of marketing communication commonly referred to as viral marketing. Viral marketing typically starts with the marketer creating some form of electronic content such as a video or a mini-site, the aim of which is usually brand-building. The URL (web address) for the electronic content is made available to Internet users, who after viewing the content will decide whether they want to pass the URL along to their friends. If the URL gets forwarded and the Internet users receiving it also keep passing the URL along, the electronic content has the potential to reach a large group of Internet users at an exponential rate (Watts and Peretti, 2007). Despite the increasing shift of advertising spending to viral marketing (Knight, 2007), the factors critical to viral marketing effectiveness remain largely unknown to both marketing academics and practitioners (Godes et al., 2005). Among the many potential critical factors, this study focuses on Internet users' motivation to forward electronic content (i.e., the URLs storing the content). Understanding Internet users' motivation to forward online content is crucial since the decision to pass the content along is completely voluntary – in other words, marketers do not pay Internet users to pass along electronic content. Electronic content that is “seeded” initially to Internet users who are more readily motivated to pass along content in general and/or if the particular content fits well with the Internet user's forwarding motivation, will more likely reach a large group of Internet users (i.e., become viral). For ease of exposition, we call hereafter the act of forwarding electronic content e-WOM and the Internet users, who are more ready to engage in e-WOM, e-mavens. Although Internet users may also spread electronic content by posting URLs in chat rooms or personal blogs in social networking sites, these actions are more similar to broadcasting to many audiences comprised of individuals who the senders may not know or intend to target. We restrict e-WOM to those forwarding actions through e-mail, instant messaging, or other communication media that are of high “addressability” in nature. We believe the scope of our e-WOM is most relevant to the current practice of viral marketing campaigns in which marketers intend to spread their messages as personal communications, rather than mass communications. One may immediately see the parallel between e-mavens and market mavens, a notion introduced by Feick and Price (1987). Market mavens are people who constantly acquire and spread general marketplace information. E-mavens on the other hand are people who acquire and spread information via electronic platforms such as email (Phelps et al., 2004). In other words, market mavens are defined by the type of information that is acquired and spread (i.e., marketplace information) while e-mavens are defined by the channel (i.e., email and the Internet) through which information is acquired and spread. E-mavens are on the other hand, conceptually similar to the notion of Internet mavens (Belch et al., 2005), except that we include both email and the Internet. Although the market maven construct has been shown to act as a personal trait (e.g., Laroche et al., 2003), we define e-mavens here primarily by high frequency of forwarding online content and leave the potential to explore e-mavens as a personal trait for future research. Not restricted to any specific type of information, we conceptualize e-WOM as a special case of a more general communication behavior, in which individuals communicate through e-mails or instant messaging to accomplish certain communication goals. Although not widely studied this way, the forwarding of electronic content can be viewed as part of a conversation and as a possible forum for interpersonal communication. We therefore develop our theoretical model of e-mavens' motivations based on the interpersonal communication literature and discuss their hypothesized effects on the action of forwarding electronic content as well as an action preceding forwarding, namely the consumption of electronic content. We then empirically test which of these motives are indeed operating.