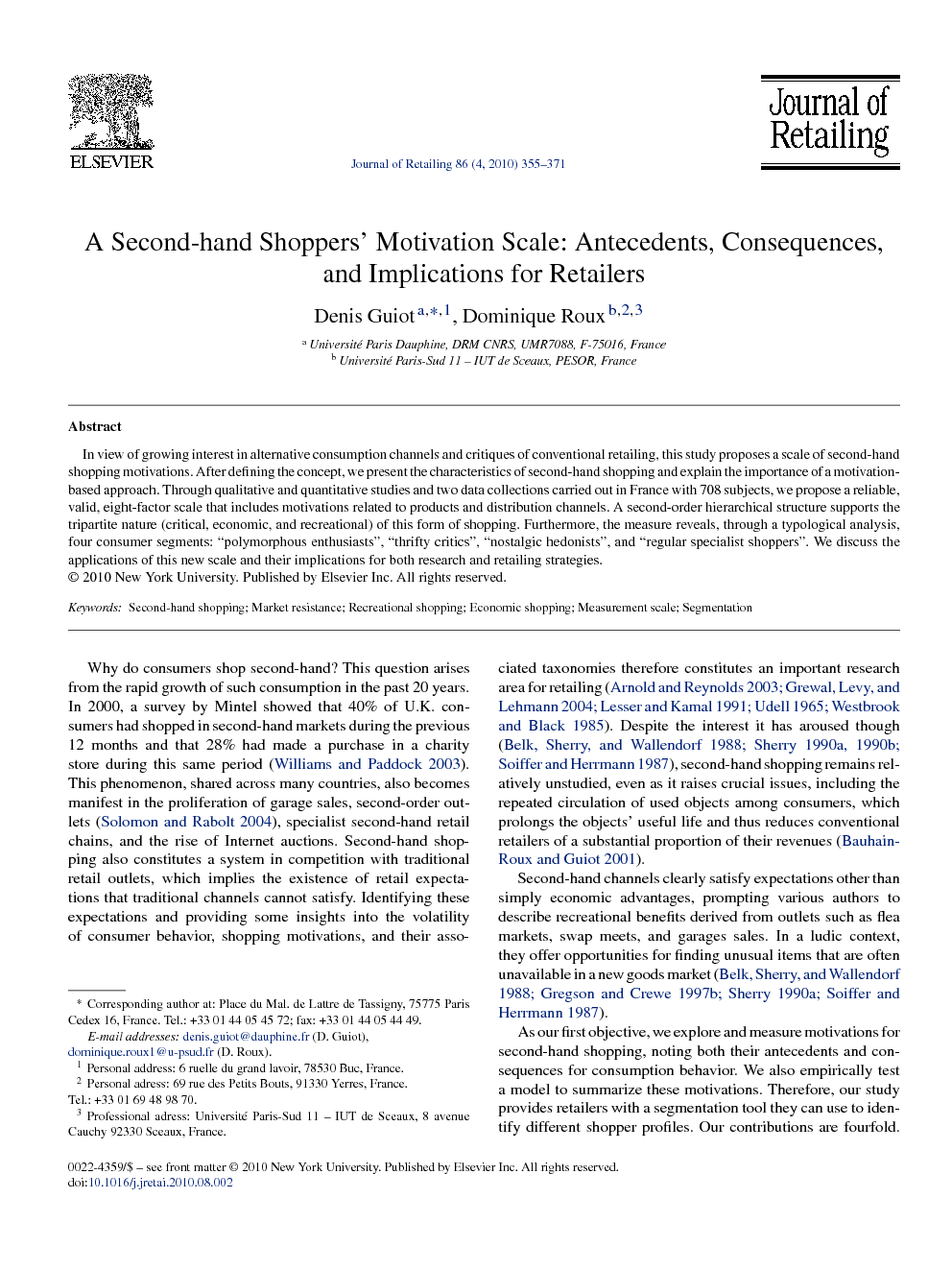 In view of growing interest in alternative consumption channels and critiques of conventional retailing, this study proposes a scale of second-hand shopping motivations. After defining the concept, we present the characteristics of second-hand shopping and explain the importance of a motivation-based approach. Through qualitative and quantitative studies and two data collections carried out in France with 708 subjects, we propose a reliable, valid, eight-factor scale that includes motivations related to products and distribution channels. A second-order hierarchical structure supports the tripartite nature (critical, economic, and recreational) of this form of shopping. Furthermore, the measure reveals, through a typological analysis, four consumer segments: “polymorphous enthusiasts”, “thrifty critics”, “nostalgic hedonists”, and “regular specialist shoppers”. We discuss the applications of this new scale and their implications for both research and retailing strategies

Historically, few studies address second-hand shopping, despite its long tradition in Europe and current expansion in many markets. For example, in France during the past 20 years, various forms of second-hand and used product sales have proliferated (Guiot and Roux 2008). What was once a marginal form of commerce, comprising a few flea markets, second-hand markets, and antique dealers, has become, in both Europe and the United States, a basic trend that makes reselling, recovery, and recycling acceptable. Second-hand shopping consists both of not buying new—a product dimension—, and frequenting channels with distinctive characteristics—a sales dimension. Therefore, we define second-hand shopping as the acquisition of second-hand objects through methods and places of exchange that are generally distinct from those for new products. By adopting a positive orientation toward this form of shopping, we invoke the concept of motivation to identify determinants of a person's actions, including wishes, needs, emotions, feeling, passions, areas of interests, beliefs, life values, fantasies, imaginary representations, personal complexes, conditioning, habits, deep-seated attitudes, opinions, and aspirations. Motivation can support investigations of behavior toward both products (Haire, 1950 and Webster and Von Pechmann, 1970) and retail channels (Tauber 1972). In particular, Westbrook and Black (1985) suggest shopping motivations consist of three dimensions: the wish to acquire a product, the desire to satisfy needs not linked to the product, and the goal of achieving certain ends independent of the actual purchase. In this framework, second-hand shopping motives encourage consumers to prefer the informal, ludic atmosphere of certain channels and look for unique and original products (Belk et al., 1988, Gregson and Crewe, 1997a, Gregson and Crewe, 1997b, Sherry, 1990a and Sherry, 1990b). Prior studies of second-hand shopping cite two reasons for the growth of this market. The economic rationale relates to declines in purchasing power of middle classes since the 1980s (Williams and Paddock 2003). A recreational explanation instead focuses on the characteristics of certain channels as the basis for their appeal. For example, second-hand markets provide various and unpredictable offerings, visual stimulation and excitement due to the plethora of goods, the urge to hunt for bargains, and feelings of affiliation and social interaction (Belk et al., 1988, Gregson and Crewe, 1997b, Sherry, 1990a, Soiffer and Herrmann, 1987 and Stone et al., 1996). In general, prior studies provide observations about particular features and advantages of the channels rather than identifying any precise motivations for this form of shopping (Bardhi and Arnould 2005). Nevertheless, they demonstrate that second-hand shoppers’ motives are not exclusively financial, that is, i/ that the channels provide sources of direct interest to shoppers, and ii/ that economic and recreational motivations are interwoven. i/ On the first point, second-hand objects may be sought for their unusual character, rarity, or geographical, biographical, or historical origins (Kopytoff 1986). This finding fits with anthropological conclusions about collections (Belk 2001) and suggests a theoretical framework for the value associated with old objects and their potential for nostalgia. In particular, Belk, Wallendorf, and Sherry (1989) identify a contamination process by which people make tangible and maintain the sacred character of certain objects through their recollection. A used object does not necessarily invite comparison to an equivalent new product, nor is its appeal solely a matter of price. The affective dimensions associated with acquiring this kind of object instead make a comparison with a new product meaningless to the purchaser. ii/ With regard to the second point, access to second-hand products comes through various channels that satisfy a wealth of motivations better than can traditional retail channels. For example, some consumers prefer to stroll around outdoors, rummage through bins, hunt for items unavailable in traditional channels, engage in discussions with sellers, bargain, and so on (Belk et al., 1988, Gregson and Crewe, 1997a, Sherry, 1990b and Stone et al., 1996). Finally, in their qualitative exploration of motives for shopping second-hand, though not validated, Bardhi and Arnould (2005) note the links of hedonic and economic aspects. Some studies suggest that for such shoppers, second-hand acquisitions offer a genuine alternative to conventional channels, sometimes inspired by criticisms of traditional channels (Sherry, 1990a, Soiffer and Herrmann, 1987, Stone et al., 1996 and Williams and Paddock, 2003). In turn, we attempt to develop and validate a measurement scale of the motivations for second-hand shopping, linked to both the acquisition of used objects and the channels in which they are available.