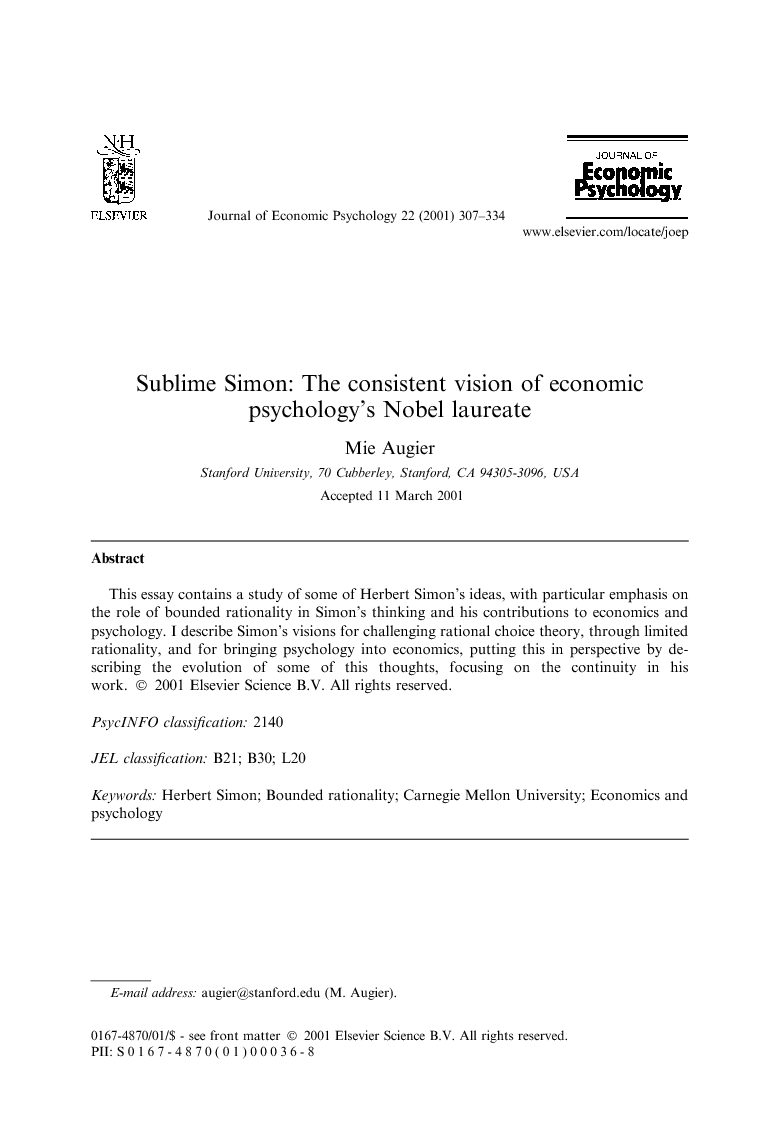 This essay contains a study of some of Herbert Simon's ideas, with particular emphasis on the role of bounded rationality in Simon's thinking and his contributions to economics and psychology. I describe Simon's visions for challenging rational choice theory, through limited rationality, and for bringing psychology into economics, putting this in perspective by describing the evolution of some of this thoughts, focusing on the continuity in his work.

Simon reports in autobiography that he began his class in 1956 with the statement, referring to a discovery made on December 16, 1955: `Over the Christmas holiday, Newell and I invented a thinking machine' (1991b, p. 206). His students were puzzled and some went home with the computer manual that Simon handed out, studying all night (Feigenbaum, 1989, p. 166). To those who experienced this, it was an `unforgettable moment' (Feigenbaum, 1989), and Simon's statement about thinking machines and his subsequent research led to important, and controversial developments in artificial intelligence, economics, psychology and cognitive science (McCorduck, 1979). Keeping in mind that the statement was made by someone who was educated in political science, with training in economics and in theories of organizations, makes it even more remarkable. But whereas this may sound as beginning of subsequent movement between disciplines, Herbert Simon and his vision proved that it was instead fruitful interdisciplinary thinking, designed to elaborate on ideas of bounded rationality. For Simon's research was directed more by problems that he wanted to solve, than by disciplines. The problems he was focusing on were the problems of how we understand reasoned human action and decision making, and how such decisions are occasionally organized in organizations. In this essay I have in particular discussed his ideas on bounded rationality and some of its effects on his work in economics and psychology. Simon's interest in the limitations on human rationality were already clear in his early work, such as Administrative Behavior and Public Administration, but it was in two essays written in the mid 1950s that he really tried to introduce the idea of limited rationality to emphasize the need for psychological ideas in economics. In Organizations, Simon, together with James March, discussed the effects of bounded rationality upon organizational behavior, and he continued expanding and elaborating the idea that human agents are, although intending to make rational decisions, bounded by their limited ability to process information in his later work, such as Human Problem Solving. The inquiry into how people make decisions and solve problems as part of their daily behavior is the center of his work – in economics, organization theory, psychology. A look at Simon's latest book in economics provided an example of the extent to which his work over the years represent a consistent elaboration of the idea that the limits to rationality matter, in particular the limits to cognitive processing, be it decision making or problem solving. As his long-time collaborator, Allen Newell, noted: `Everything that Simon has done has stemmed from the working out of this idea' (1989a, p. 400). Simon's intellectual legacy not only constitutes a remarkable basis and pioneering work for understanding human behavior, using elements from different disciplines; it also leaves plenty of food for thought for further developments within economics and psychology, and perhaps also the field of economic psychology itself.