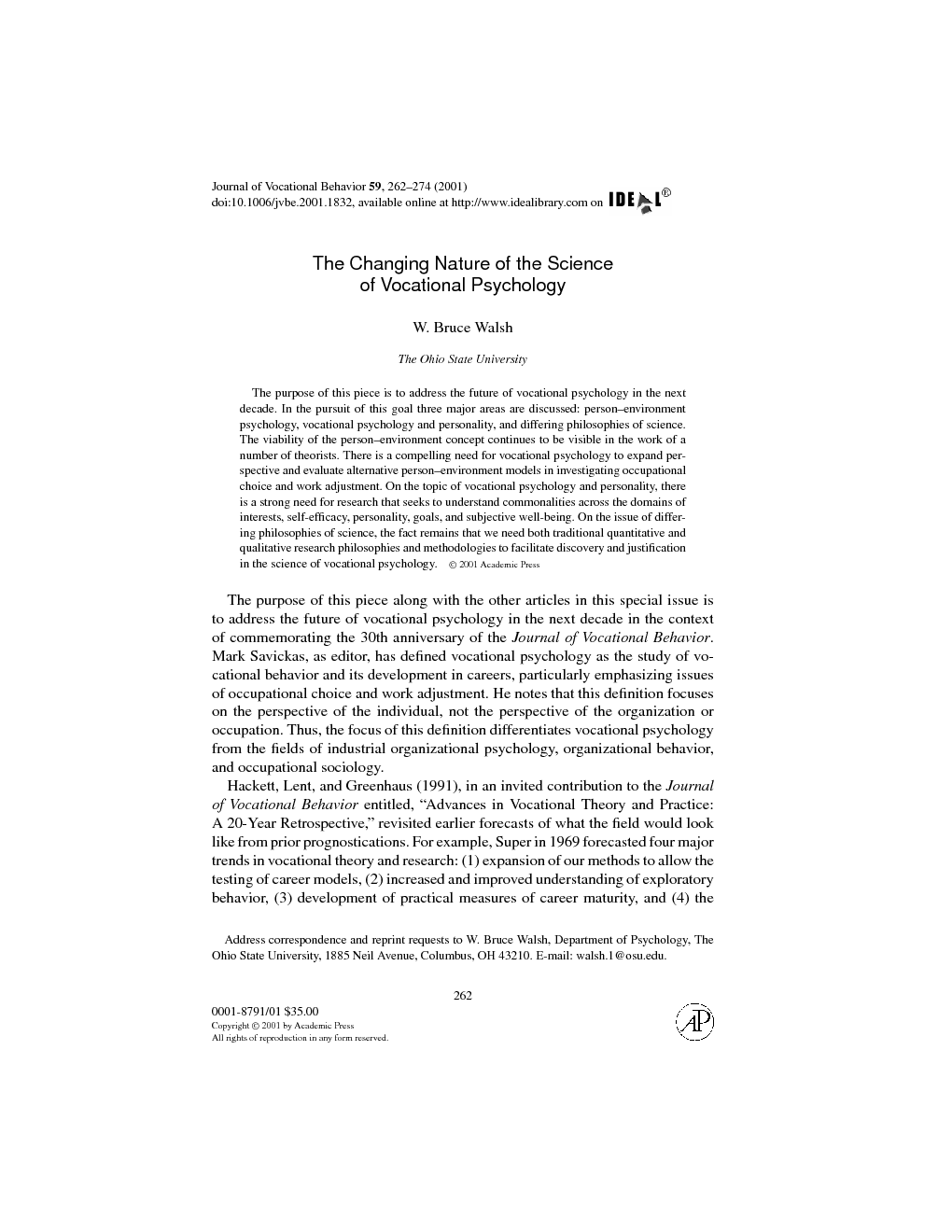 The purpose of this piece along with the other articles in this special issue is to address the future of vocational psychology in the next decade in the context of commemorating the 30th anniversary of the Journal of Vocational Behavior. Mark Savickas, as editor, has defined vocational psychology as the study of vocational behavior and its development in careers, particularly emphasizing issues of occupational choice and work adjustment. He notes that this definition focuses on the perspective of the individual, not the perspective of the organization or occupation. Thus, the focus of this definition differentiates vocational psychology from the fields of industrial organizational psychology, organizational behavior, and occupational sociology. Hackett, Lent, and Greenhaus (1991), in an invited contribution to the Journal of Vocational Behavior entitled, “Advances in Vocational Theory and Practice: A 20-Year Retrospective,” revisited earlier forecasts of what the field would look like from prior prognostications. For example, Super in 1969 forecasted four major trends in vocational theory and research: (1) expansion of our methods to allow the testing of career models, (2) increased and improved understanding of exploratory behavior, (3) development of practical measures of career maturity, and (4) therefinement of self-concept theory. Osipow(1969) expanded this list by envisioning increased sophistication of vocational measures and methods. And Holland (1969) expressed the need for the proliferation of useful research with practical results. In the same year, Betz (1991), in an invited contribution to Journal of Vocational Behavior entitled, “Twenty Years of Vocational Research: Looking Back and Ahead,” noted that despite the progress made in the past 20 years, we also seem to repeat our mistakes. In this context, Betz made a number of recommendations based on the six topical reviews in 1991 covering advances in vocational theory and practice (Hackett, Lent, & Greenhaus, 1991); demographic trends in vocational behavior (London & Greller, 1991); career development interventions in organizations (Russell, 1991); advances in the measurement of career development constructs (Chartrand & Camp, 1991); job satisfaction, work commitment, and the relations of thework and nonwork domains (Loscocco&Roschelle, 1991); and milestones in vocational behavior from a counseling psychology perspective (Borgen, 1991). Although these recommendations were made 10 years ago they continue to be relevant today. The recommendations are briefly noted below. First, the point that more of our research should be theory driven was made by Hackett et al. (1991) and Loscocco and Roschelle (1991). Second, we need to avoid research which reinvents the wheel or for the most part duplicates work published previously in a journal we had not reviewed (Russell, 1991; Loscocco&Roschelle, 1991). Third, we need to do more work which serves to integrate concepts and ideas rather than develop new concepts which are similar to existing concepts, but with different names (Chartrand & Camp, 1991; Hackett et al., 1991). Fourth, Chartrand and Camp (1991) and Hackett et al. (1991) emphasized the need to pay more attention to the establishment of the psychometric quality of the measures used in our research. And fifth, Russell (1991) cited the need for more attention to evaluating the effectiveness and utility of career development interventions in organizations. Finally, with the advantage of hindsight, two recommendations that were not made that probably would have been made in 1991 are the need for more research focusing on minority and underserved populations and the need for more research directed to discrimination (race, sex, disability, age, national origin, and religion) in the workplace. The primary goal in this piece in looking to the future of vocational psychology is to expand and integrate concepts and ideas drawing on existing rich theories and concepts. In the pursuit of this goal the focus is on three areas: (1) person– environment psychology; (2) vocational psychology, personality, and other domains; and (3) differing philosophies of science. As noted by Tinsley (2000) the person–environment fit model is the prevailing career choice model and Holland’s RIASEC theory (1997) is the most universally applied in the person–environment context. The viability of the person environment concept continues to be visible in the work of a number of other theorists. There is, in my opinion, a compelling need for vocational psychology to expand perspective and evaluate alternative person– environment models in investigating occupational choice and work adjustment. On the topic of vocational psychology and personality, there is a strong need for research that seeks to understand commonalities across the domains of interests,self-efficacy, personality, goals, and subjective well-being. There is evidence that commonalities exist and that they can be described within a framework that is useful in vocational psychology. In regard to the third area, for some time tensions have existed between traditional quantitative and qualitative research based on differing philosophies of science (Lee, 1999). The simple fact remains that we need both philosophies and methodologies to facilitate discovery and justification in the science of vocational psychology.

As we discuss the future of vocational psychology, remember as noted by Burke (2000) that truth is only what we say it is. Increasingly, we donot all say the say thing. Things change and science keeps changing its collective mind. For example, Burke (2000) notes that light was particles until 1801. Then it became waves and in 1905 particles again. In 1924, light became both. Space and time were absolutes until 1886, when the concept of relativity was introduced by Ernest Mach, which in turn set the stage for Einstein. Until 1779 creation was believed to have happened in 4004 BC. In 1779 the date became 75,000 years ago. In 1846 it became 100 million years ago. Current evidence indicates that life appeared on Earth approximately 3.9 billion years ago.However, recently (Verrengia, 2001) scientists discovered a crystal believed to be at least 4.3 billion years old. This evidence suggests that oceans, continents, and life itself developed earlier than previously thought. A favorite, and one that really makes the point: photonic bandwidth (light) is in the process of replacing electrical impulses as the quantum building block of communications. Stated differently, companies are making gear and high-speed routers that turn data, audio, and video into light that is fired through glass wires (fiber-optics) at high speeds. This suggests that every communication device in existence (TVs, telephones, modems, cable boxes, and anything that connects to the internet) must in time be converted. In summary,one thing that we can count on is that the science of vocational psychology will change.