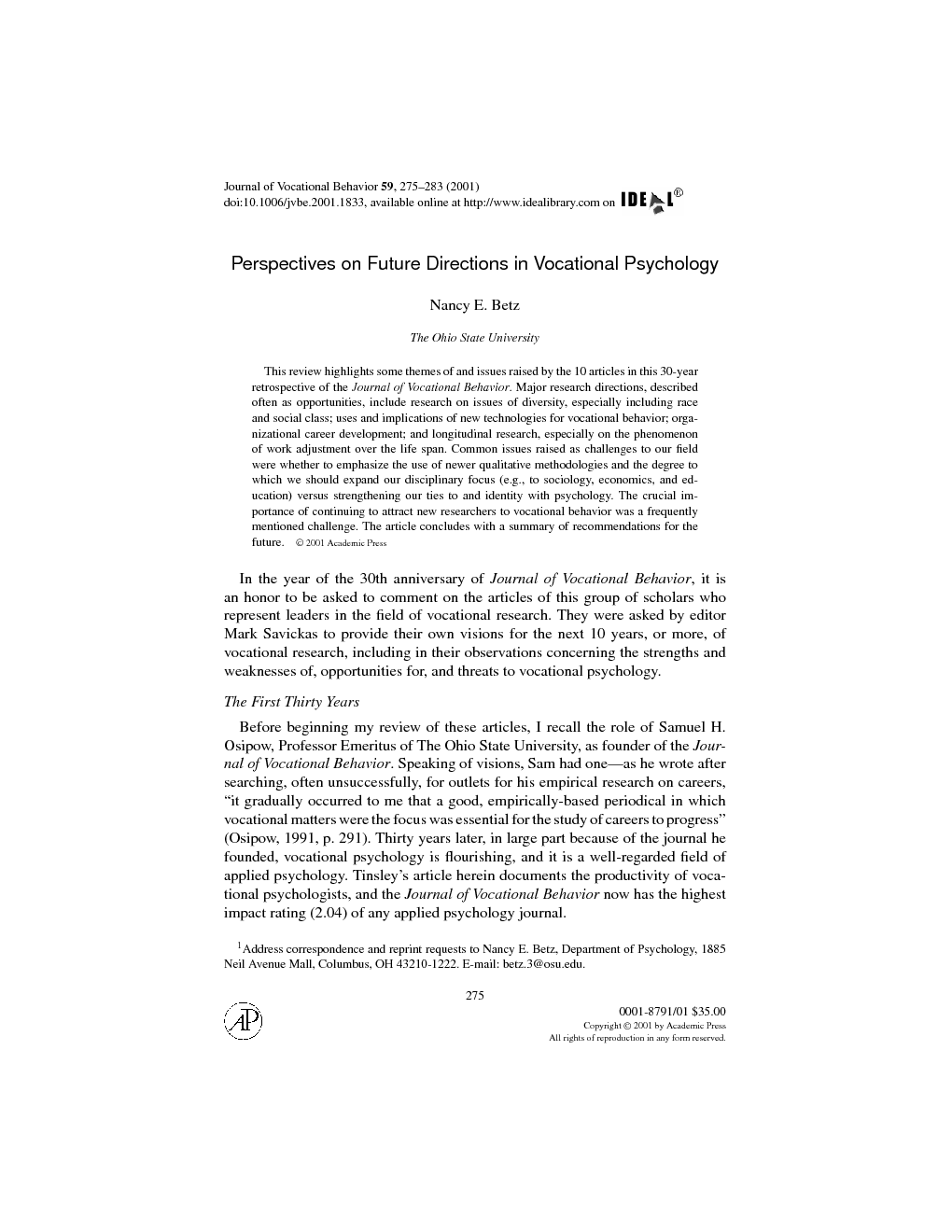 This review highlights some themes of and issues raised by the 10 articles in this 30-year retrospective of the Journal of Vocational Behavior. Major research directions, described often as opportunities, include research on issues of diversity, especially including race and social class; uses and implications of new technologies for vocational behavior; organizational career development; and longitudinal research, especially on the phenomenon of work adjustment over the life span. Common issues raised as challenges to our field were whether to emphasize the use of newer qualitative methodologies and the degree to which we should expand our disciplinary focus (e.g., to sociology, economics, and education) versus strengthening our ties to and identity with psychology. The crucial importance of continuing to attract new researchers to vocational behavior was a frequently mentioned challenge. The article concludes with a summary of recommendations for the future.

Before beginning my review of these articles, I recall the role of Samuel H. Osipow, Professor Emeritus of The Ohio State University, as founder of the Journal of Vocational Behavior. Speaking of visions, Sam had one—as he wrote after searching, often unsuccessfully, for outlets for his empirical research on careers, “it gradually occurred to me that a good, empirically-based periodical in which vocational matters were the focuswas essential for the study of careers to progress” (Osipow, 1991, p. 291). Thirty years later, in large part because of the journal he founded, vocational psychology is flourishing, and it is a well-regarded field of applied psychology. Tinsley’s article herein documents the productivity of vocational psychologists, and the Journal of Vocational Behavior now has the highest impact rating (2.04) of any applied psychology journal.In addition to this vision, Sam was even then a social activist. He made efforts to bring women onto the editorial board (not at all common in the 1970s) and served as an important mentor to many female scholars. Sam also encouraged research on the career development of women and racial/ethnic minority groups. The Journal of Vocational Behavior became known as a major outlet for research on women’s careers, and it helped bring research on women’s and minority career development into the mainstream, where it remains firmly today. (See also Tinsley’s article herein.) Given this leadership in research on the vocational development of women and minorities, it seems quite fitting that the most frequently and strongly emphasized directions in vocational psychology are those related to the objectives of diversity and social justice. I comment more extensively on this in the section to follow. In addition to its fostering of research on the career development of women and minorities, traditions of psychometric excellence and the importance of basing research on theory were also established by Osipow. As can be seen in the articles herein, these emphases are still strong, and they are still essential to the quality and impact of our work. In addition to reminding readers of the vision of the founder of this journal, Sam Osipow, Bruce Walsh reminds us of the series of articles contained in the 20-year (1991) retrospective on vocational research. This retrospective, orchestrated by Howard E. A. Tinsley, editor of Journal of Vocational Behavior from 1990 to 1998, included six topical review articles (Borgen, 1991; Chartrand & Camp, 1991; Hackett, Lent, & Greenhaus, 1991; London & Greller, 1991; Loscocco & Roschelle, 1991; Russell, 1991) followed by three response articles (Betz, 1991; Harmon, 1991; Osipow, 1991). Together these provided comprehensive reviews and analyses of the state of our field.

These article reinforce what I believe to be the cornerstones of our field—a vast and important field of study, a tradition rich in theory and characterized by psychometric excellence and methodological rigor, and a commitment to social justice and the welfare of all individuals. We must maintain our basis of scientific and methodological excellence at the same time that we intensify our attention to diversity and social justice. The many needed areas of new or continuing research can be accomplished only if we continue to attract and train new vocational psychology researchers. We cannot continue to expand our areas of focus without new energy and dedication to the goals mentioned by the authors of these articles. And we are more likely to make progress toward the goals of diversity, movement beyond classism, and multiculturalism if many of the new scholars we attract represent those groups or constituencies. My overall reaction to this collection of articles is one of enthusiasm for and excitement about all there is yet to be done; at the same time I remain proud of our accomplishments in the first 30 years. Vondracek (2001) says it best: “The greatest strength of vocational psychology is that its core subject matter is of central importance in the lives of individuals in virtually all modern societies and of critical importance to the welfare of families, communities, and nations. No other discipline can make such sweeping claims.”