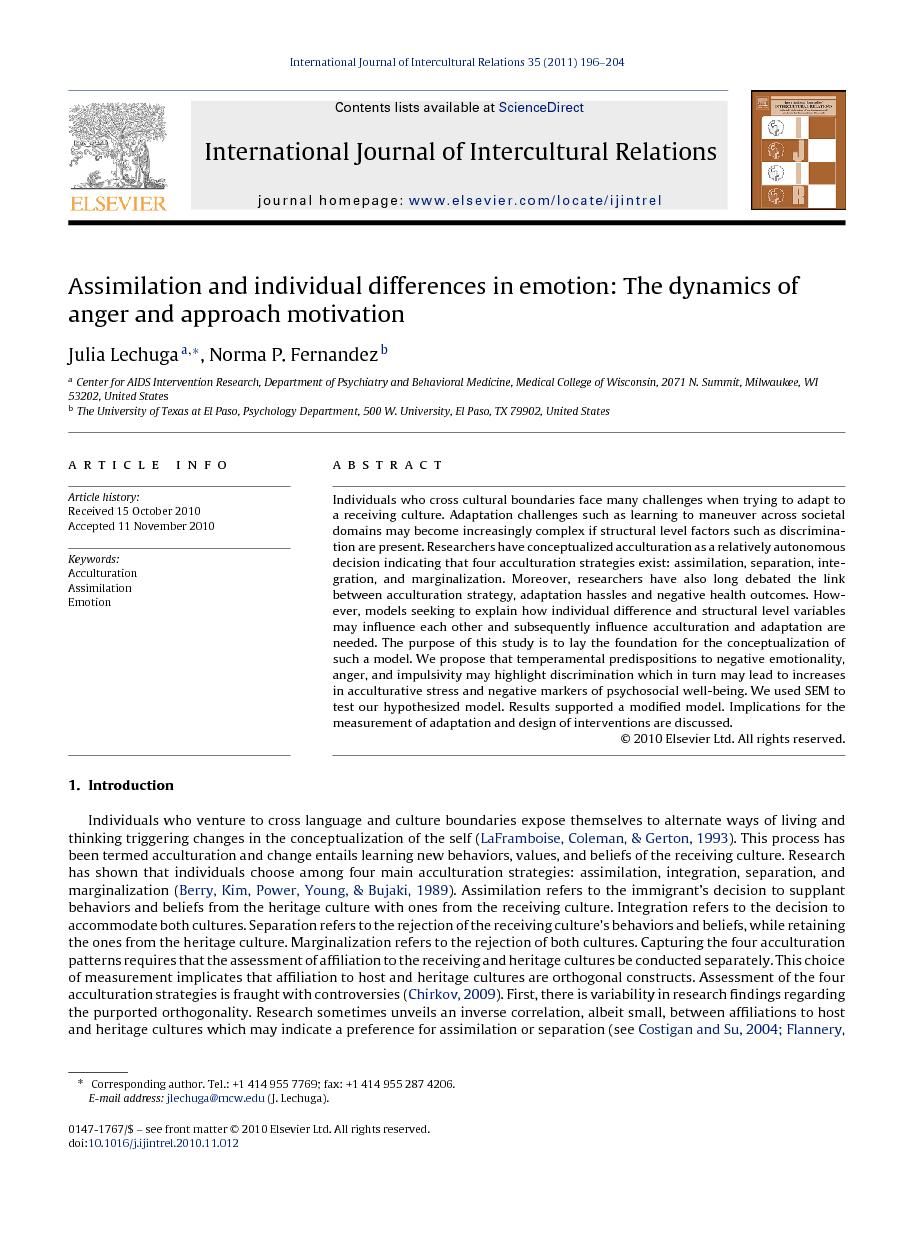 Individuals who cross cultural boundaries face many challenges when trying to adapt to a receiving culture. Adaptation challenges such as learning to maneuver across societal domains may become increasingly complex if structural level factors such as discrimination are present. Researchers have conceptualized acculturation as a relatively autonomous decision indicating that four acculturation strategies exist: assimilation, separation, integration, and marginalization. Moreover, researchers have also long debated the link between acculturation strategy, adaptation hassles and negative health outcomes. However, models seeking to explain how individual difference and structural level variables may influence each other and subsequently influence acculturation and adaptation are needed. The purpose of this study is to lay the foundation for the conceptualization of such a model. We propose that temperamental predispositions to negative emotionality, anger, and impulsivity may highlight discrimination which in turn may lead to increases in acculturative stress and negative markers of psychosocial well-being. We used SEM to test our hypothesized model. Results supported a modified model. Implications for the measurement of adaptation and design of interventions are discussed.

The purpose of this study was to develop and test an exploratory model that would specify the role that motivation to regulate behavior through an approach system would have on the decision to assimilate. Furthermore, our interest lied on elucidating the influence of affective antecedents of the approach system on well-being in the context of the experience of discrimination and acculturative stress, both deterrents of assimilation. Because we consider this study a first attempt at specifying the role of seldom considered individual difference variables in acculturation research (i.e., affect), we inspected modification indices and made suggested changes to our original model to maximize model fit. Modification indices indicated that four paths should be added to our original model to improve model fit. After the addition of these paths, results yielded estimates suggestive of good fit. Results indicated that neuroticism influenced anger which in turn influenced a tendency to regulate behavior through the approach system. The approach system contributed to increases in assimilation yet heightened the experience of discrimination. This is an important finding because it elucidates that an individual's temperament can also contribute to accentuate the negative experience of acculturation hassles. We conducted our study in a border region where individuals have the opportunity to commute daily to Mexico. Moreover, our sample consisted of a mixture of individuals who were foreign and U.S. born and who varied in the length of time they had been residing in the U.S. For example, 75% of our sample reported to have lived in the U.S. between 5 and 35 years. These characteristics suggest that participants may have been at different stages of the acculturation process which may have influenced motivation to assimilate. Moreover, length of residence in the U.S. is associated with an increase in mental disorders. Future studies should attempt to replicate our model in a more homogeneous sample. A limitation of our study was that we assessed assimilation only. However, we would like to point out that the main objective of our study was to investigate the role of affect in the decision to assimilate. It was particularly interesting that our results supported our model in a border community where approximately 75% of the population is Hispanic. Affect influenced the experience of discrimination in a group of individuals who may be far removed from such experiences. Responses to the open-ended item of the acculturative stress instrument – asking participants to identify stressful situations they may have experienced as a result of being members of an ethnic minority – suggest that participants were fundamentally aware of the negative stereotypes endorsed by some members of the U.S. culture yet acknowledged that in El Paso there is less discrimination. An alternative explanation for these findings may be that individuals of Mexican descent who have lived in the U.S. for a shorter period of time may be perceiving discrimination from individuals of Mexican descent who have lived in the U.S. for a longer period of time. Unfortunately, we did not measure whether a contentious relationship exists between individuals of Mexican descent who vary in demographic characteristics related to culture change. Safdar et al. (2009) indicate that acculturation is a process subject to the influence of in-group/out-group distinctions. Jasinskaja-Lahti, Liebkind, Horenczyk, & Schmitz (2003) have shown that members of the same ethnic group can surely be perceived as the out-group. With our choice of sample, we incurred in other limitations including restricted generalizability to older adults. In addition, our design was cross-sectional. Ultimately, the best strategy to investigate the process of culture change and adaptation is via longitudinal studies. Presently, our research group is investigating the acculturation practices of the border community at large. Padilla and Perez (2003) advocated the use of a socio-cognitive approach to the study of acculturation. We attempted to advance their model by linking the experience of discrimination to individual differences in emotion regulation. We would like to advocate the use of an experimental approach for the study of emotion regulation, anger, distress, and acculturation in future studies. Research suggests that acculturation may be malleable and shift in response to contextual cues (Lechuga, 2008). Use of an experimental approach can contribute significantly to our understanding of the malleability of acculturation in response to contextual cues indicative of stereotype threat and potential discrimination. Moreover, a shift in acculturation strategy should be mediated by the regulation of affect. Schmitz, 1992 and Schmitz, 1994 has conducted extensive work on the relationship between the big five personality dimensions, coping, and acculturation strategies and outcomes. Schmitz's work suggests, indeed, that certain personality factors such as neuroticism and impulsivity are inversely related to a preference for integration and that certain coping strategies such as problem-oriented coping are positively related to preference for assimilation. However, Kosic's (2006) review of the literature on the relationship between acculturation and personality indicates that this is a complex relationship and research attempting to elucidate it has been fraught by inconsistent findings. Moreover, a small proportion of the acculturation variance is predicted by personality alone. Consequently, Kosic (2006) recommends following the “person x situation” view which posits that immigrants’ individual characteristics will interact with situational factors such as host culture members’ attitudes towards the acculturation strategies of immigrants. For example, research suggests that extraversion predicts assimilation (Kosic, 2006). However, maladjustment may result when extraverted immigrants enter a culture where members of the host society prefer separation. Following Kosic's recommendation, our objective was to contribute to previous work on acculturation and personality by elucidating interactional relationships between the individual and his/her environment that may lead to an aversive acculturation experience. We hope that our research expands acculturation theory by promoting the inclusion of individual level variables that may accentuate the experience of negative contextual factors. Interventions designed to advance the adjustment of individuals undergoing the process of culture change may be more successful if they target a combination of individual level and contextual factors.