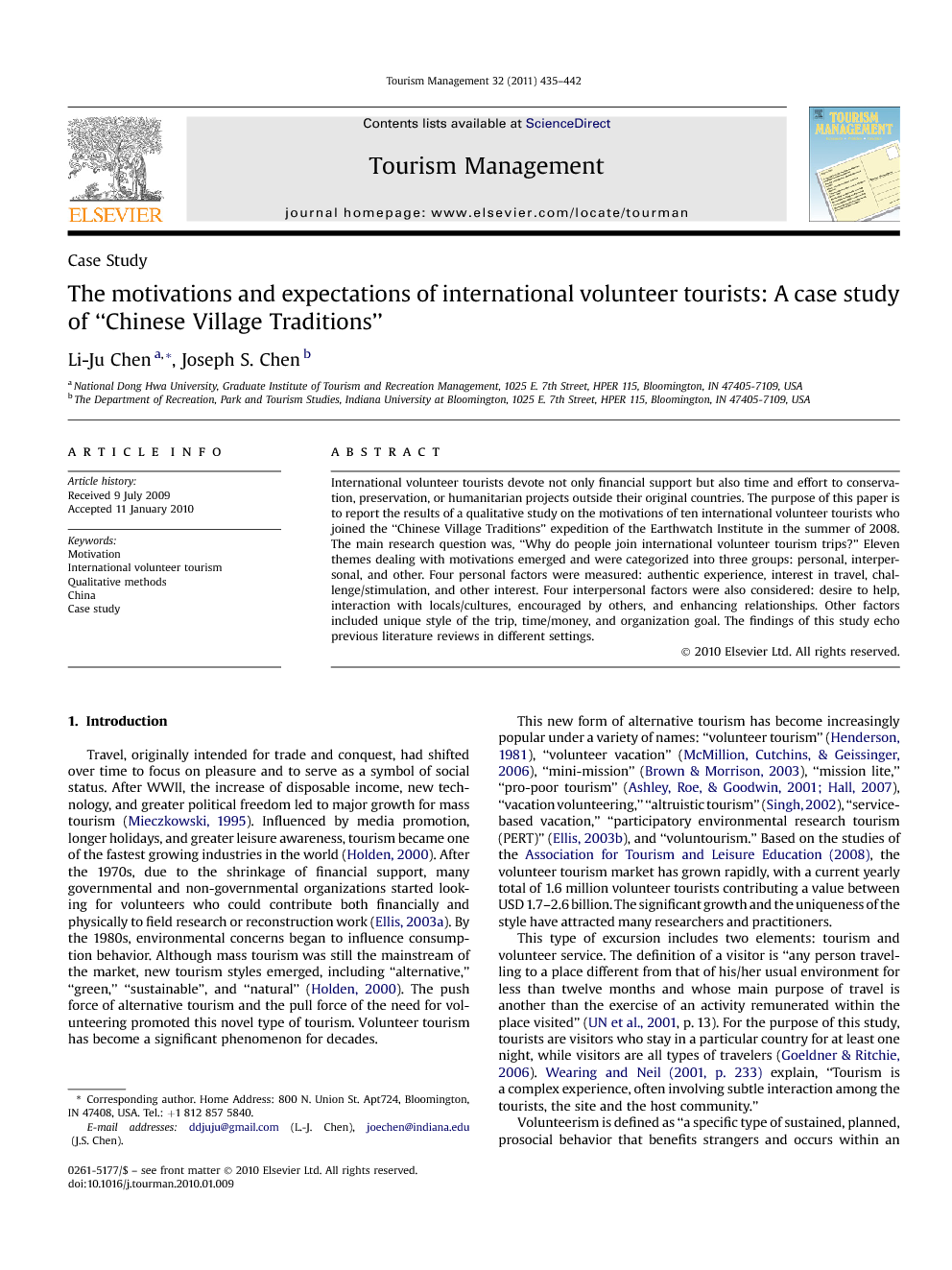 International volunteer tourists devote not only financial support but also time and effort to conservation, preservation, or humanitarian projects outside their original countries. The purpose of this paper is to report the results of a qualitative study on the motivations of ten international volunteer tourists who joined the “Chinese Village Traditions” expedition of the Earthwatch Institute in the summer of 2008. The main research question was, “Why do people join international volunteer tourism trips?” Eleven themes dealing with motivations emerged and were categorized into three groups: personal, interpersonal, and other. Four personal factors were measured: authentic experience, interest in travel, challenge/stimulation, and other interest. Four interpersonal factors were also considered: desire to help, interaction with locals/cultures, encouraged by others, and enhancing relationships. Other factors included unique style of the trip, time/money, and organization goal. The findings of this study echo previous literature reviews in different settings.

The case study of the “Chinese Village Traditions” expedition illustrated a typical international volunteer tourism trip. The site was located in a remote village that foreign tourists seldom approach. The majority of the expedition was devoted to volunteer services helping PIs collect and record research documents; a few days were also allotted for sightseeing. The volunteer tourists stayed with a host family during the expedition, offering even deeper cultural interaction. The primary researcher utilized qualitative method to explore the expectations and motivations of the participants in this expedition. The most frequently mentioned motivations in this study are authentic experience and interaction with locals or culture. The desire to trade the standard daily environment for a brand new world prompts participants to join international volunteer tourism trips. To satisfy these needs, approaches encouraging the interactions between locals and participants such as using local houses as accommodations should be taken into account. Although such arrangements may be difficult and take more effort, it promotes culture encounter for both participants and the locals. On the other hand, most participants were first-time visitors who had little or no knowledge about the local culture or language in this study. Therefore, cultural barriers are indeed expected in such a trip. Participants with various motivations and expectations may have different levels of culture difficulties and copying strategies in one team. From managerial viewpoints, giving pre-trip orientations and detailed information regarding living condition in the village visited are crucial that could help participants to cope with apprehension owing to cultural shock. For example, some participants may consider limited water sources and pit holes as exciting residential experience while some may really concern about the sanitary issues. Also, the acquired trip experience by past participants could be utilized as a guidepost for new participant to prevail cultural barriers. Finally, the study targets a group known as shallow volunteer tourists, based on Callanan and Thomas (2005). Shallow volunteer tourists prefer short-term trips (e.g., few weeks), demonstrate few skills, experience low levels of direct contributions to locals, and tend to be more passive in participation. According to Callanan and Thomas (2005), the destination of the project and self-interest motives plays significant roles in participants' decision making processes. Also, the meaning of the project must be emphasized. International volunteer tourists spend considerable amounts of money, time, and labor volunteering and sightseeing. The importance of the project is a major point of their concern. To attract and retain international volunteer tourists, operators should pay specific attentions to these points. In summary, the eleven themes of motivation extracted from the comments of 10 international volunteer tourists of the “Chinese Village Traditions” expeditions were categorized into three groups. There are four themes within personal factors: authentic experience, interest in travel, challenge/stimulation, and other interest; four themes within interpersonal factors: desire to help, interaction with locals/cultures, encouraged by others, and enhancing relationships; and three themes within other factors: unique style of the trip, time/money, and organization goal. By comparing the previous literature review, the motivations themes found in the study were confirmed with other research. Since this qualitative study is considered as an exploratory research, it is suggested that the findings of 11 motivation items can lead to the construction of an international volunteer tourists' motivation scale by using a large-scale survey which may further streamline the motivation dimensionality.