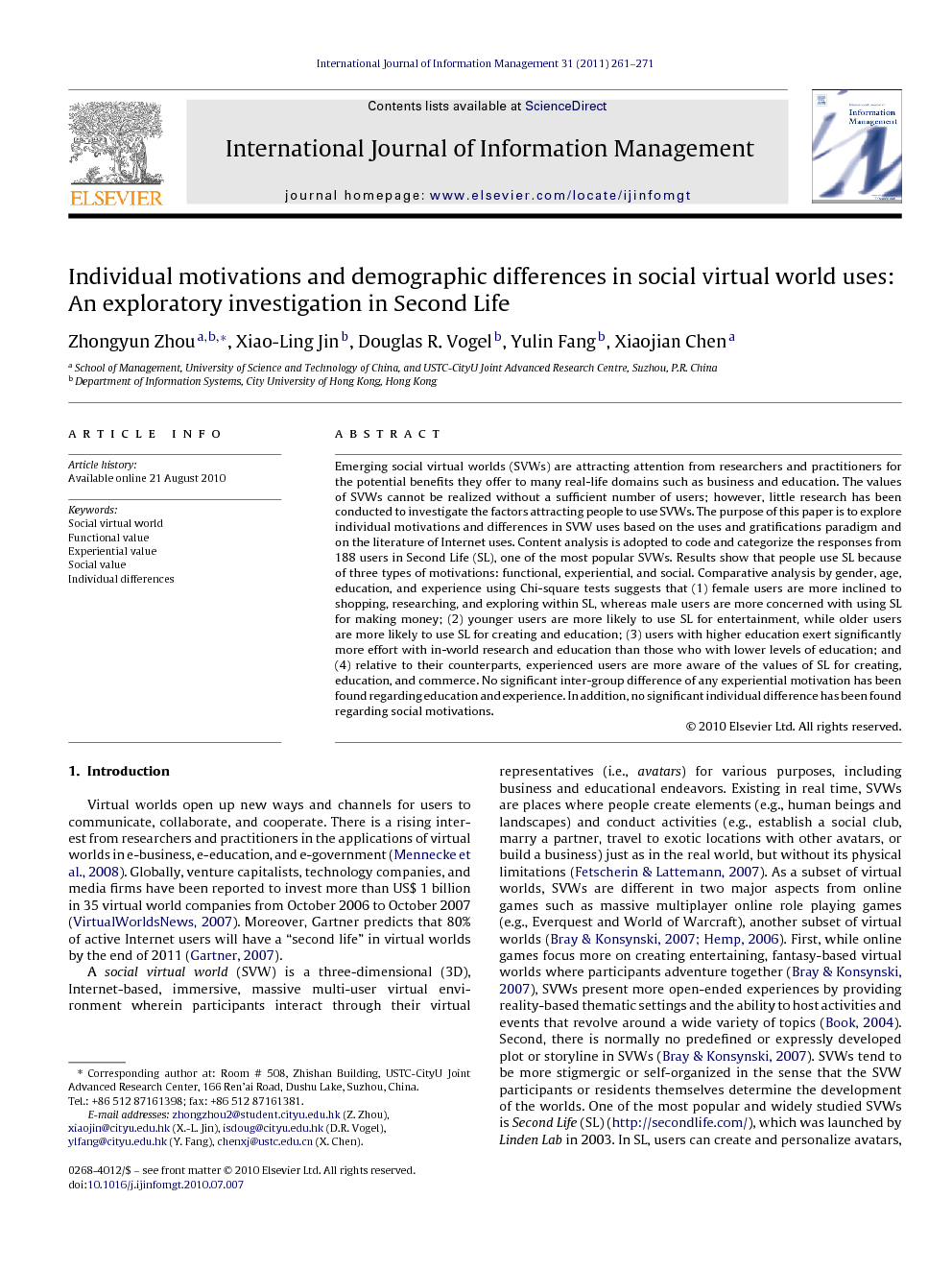 Emerging social virtual worlds (SVWs) are attracting attention from researchers and practitioners for the potential benefits they offer to many real-life domains such as business and education. The values of SVWs cannot be realized without a sufficient number of users; however, little research has been conducted to investigate the factors attracting people to use SVWs. The purpose of this paper is to explore individual motivations and differences in SVW uses based on the uses and gratifications paradigm and on the literature of Internet uses. Content analysis is adopted to code and categorize the responses from 188 users in Second Life (SL), one of the most popular SVWs. Results show that people use SL because of three types of motivations: functional, experiential, and social. Comparative analysis by gender, age, education, and experience using Chi-square tests suggests that (1) female users are more inclined to shopping, researching, and exploring within SL, whereas male users are more concerned with using SL for making money; (2) younger users are more likely to use SL for entertainment, while older users are more likely to use SL for creating and education; (3) users with higher education exert significantly more effort with in-world research and education than those who with lower levels of education; and (4) relative to their counterparts, experienced users are more aware of the values of SL for creating, education, and commerce. No significant inter-group difference of any experiential motivation has been found regarding education and experience. In addition, no significant individual difference has been found regarding social motivations.

Virtual worlds open up new ways and channels for users to communicate, collaborate, and cooperate. There is a rising interest from researchers and practitioners in the applications of virtual worlds in e-business, e-education, and e-government (Mennecke et al., 2008). Globally, venture capitalists, technology companies, and media firms have been reported to invest more than US$ 1 billion in 35 virtual world companies from October 2006 to October 2007 (VirtualWorldsNews, 2007). Moreover, Gartner predicts that 80% of active Internet users will have a “second life” in virtual worlds by the end of 2011 (Gartner, 2007). A social virtual world (SVW) is a three-dimensional (3D), Internet-based, immersive, massive multi-user virtual environment wherein participants interact through their virtual representatives (i.e., avatars) for various purposes, including business and educational endeavors. Existing in real time, SVWs are places where people create elements (e.g., human beings and landscapes) and conduct activities (e.g., establish a social club, marry a partner, travel to exotic locations with other avatars, or build a business) just as in the real world, but without its physical limitations (Fetscherin & Lattemann, 2007). As a subset of virtual worlds, SVWs are different in two major aspects from online games such as massive multiplayer online role playing games (e.g., Everquest and World of Warcraft), another subset of virtual worlds ( Bray and Konsynski, 2007 and Hemp, 2006). First, while online games focus more on creating entertaining, fantasy-based virtual worlds where participants adventure together (Bray & Konsynski, 2007), SVWs present more open-ended experiences by providing reality-based thematic settings and the ability to host activities and events that revolve around a wide variety of topics (Book, 2004). Second, there is normally no predefined or expressly developed plot or storyline in SVWs (Bray & Konsynski, 2007). SVWs tend to be more stigmergic or self-organized in the sense that the SVW participants or residents themselves determine the development of the worlds. One of the most popular and widely studied SVWs is Second Life (SL) (http://secondlife.com/), which was launched by Linden Lab in 2003. In SL, users can create and personalize avatars, private virtual spaces (lands), and objects (houses and clothes) (Fetscherin & Lattemann, 2007). They can also buy and sell both virtual and real products using Linden Dollars (L$), the virtual currency in SL, which has a real exchange rate with US dollars (Hendaoui, Limayem, & Thompson, 2008). Scholars have recognized the potential of SVWs to transform many aspects of human life, including education, business, social events, corporate meetings, social networking, and e-commerce (Bray & Konsynski, 2007). Companies have invested millions of dollars in SVWs for business endeavors such as advertising (VirtualWorldsNews, 2007), conducting meetings and conferences, training and recruitment, building product prototypes, and simulating business environment, among others (SecondLife, 2009). Apart from visionary corporations (e.g., IBM, Michelin, and Xerox), hundreds of leading universities (e.g., Harvard, Stanford, and Open University) use SL as a vibrant part of their educational programs. In addition, governments have indicated interest in SVWs. For example, Entropia is supported by the Beijing municipal government with a vision of “bringing 10,000 work-at-home, pollution-free job opportunities to China” (Allen, 2007). However, the expected values of SVWs can be realized only if there are sufficient users engaging in these SVWs. The first-to-critical-mass advantage perspective (rather than a first- or early-mover advantage) suggests that entities who can quickly attract high popularity and reach critical mass will most likely be successful (Wang, 2009 and Westland, 2010). Therefore, the first step towards the success of any SVW is to build a good understanding of the motivations of various users for using the SVW, because this will enable the SVW operator to attract different kinds of users to participate in the SVW. However, little research has focused on this issue. To fill this research gap, this study explores individual motivations and differences in SVW uses based on the uses and gratification paradigm (Blumler & Katz, 1974) and prior literature on Internet uses. The research questions to be investigated in this study are as follows: (i) What are the specific motivations of individual SVW users? (ii) How do the individual differences of SVW users affect their motivation distinctions? This study seeks to explore the reasons for using SL; the reasons for not using SL are beyond the scope of this study. The remainder of this paper is organized as follows. The next section describes SVWs and reviews previous research on SVWs. Section 3 elaborates on the theoretical background for investigating individual motivations and concerns for using SVW. Section 4 describes the research method. The results of content analyses are presented in Section 5. The paper concludes with a discussion of core findings, implications for research and practice, limitations, and suggestions for future research.

In this study, the motivations of individual users in SVW usage, as well as how individual differences (gender, age, education, and experience) affect user predisposition towards certain motivations, were explored. Drawing upon the U&G paradigm as the underlying theory, qualitative responses from 188 SL users were collected using an online open-ended survey. Content analysis of the qualitative data lists the specific motivations of SL users in three categories: functional, experiential, and social. Furthermore, comparative analysis by gender, age, education, and experience using Chi-square tests suggests that the motivation preferences of SVW users are contingent upon their individual traits. Understanding user motivations and the importance of individual differences in motivation distinctions is an early but important step towards deeper understanding and better management of SVWs.