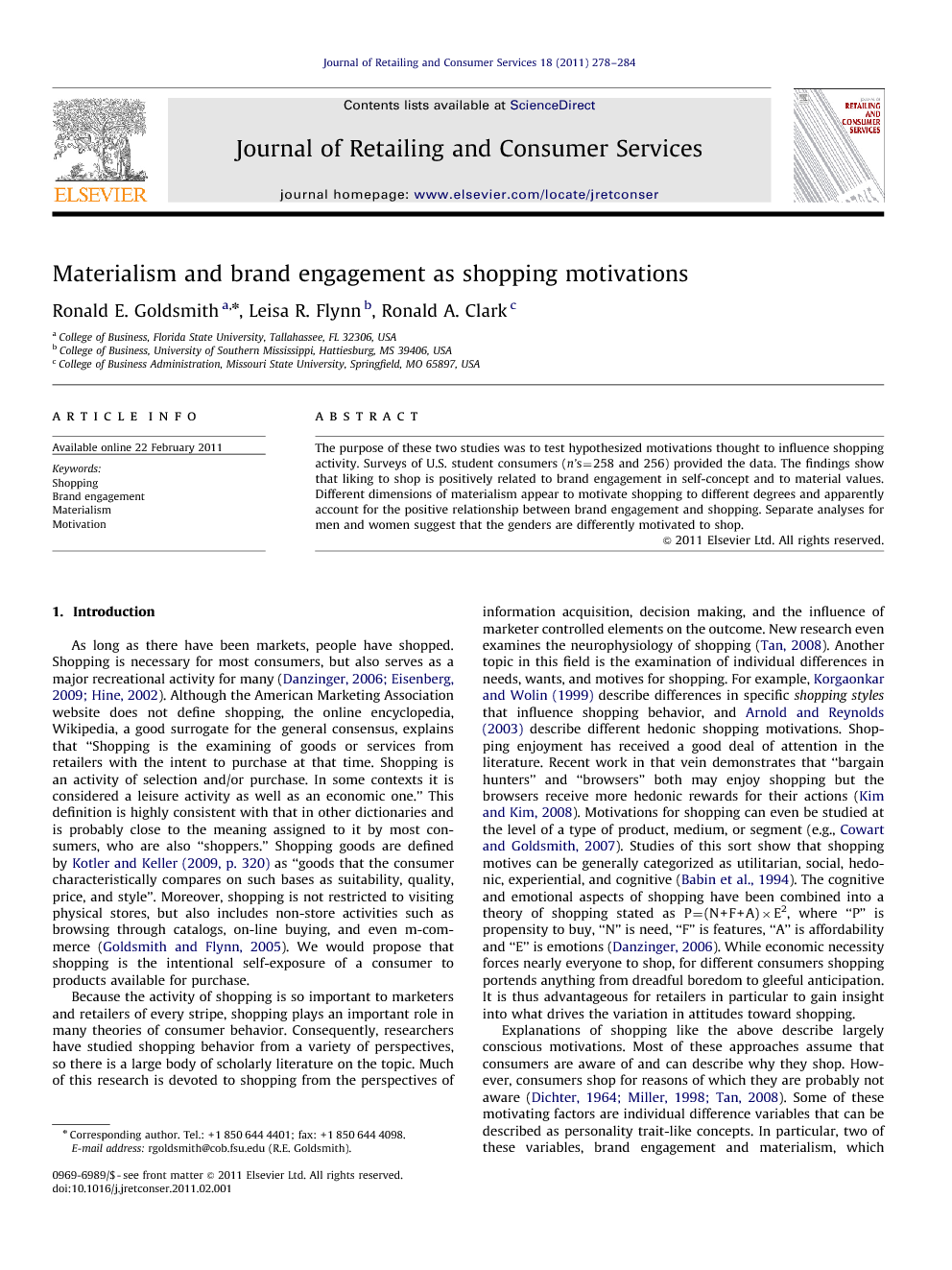 The purpose of these two studies was to test hypothesized motivations thought to influence shopping activity. Surveys of U.S. student consumers (n's=258 and 256) provided the data. The findings show that liking to shop is positively related to brand engagement in self-concept and to material values. Different dimensions of materialism appear to motivate shopping to different degrees and apparently account for the positive relationship between brand engagement and shopping. Separate analyses for men and women suggest that the genders are differently motivated to shop.

As long as there have been markets, people have shopped. Shopping is necessary for most consumers, but also serves as a major recreational activity for many (Danzinger, 2006, Eisenberg, 2009 and Hine, 2002). Although the American Marketing Association website does not define shopping, the online encyclopedia, Wikipedia, a good surrogate for the general consensus, explains that “Shopping is the examining of goods or services from retailers with the intent to purchase at that time. Shopping is an activity of selection and/or purchase. In some contexts it is considered a leisure activity as well as an economic one.” This definition is highly consistent with that in other dictionaries and is probably close to the meaning assigned to it by most consumers, who are also “shoppers.” Shopping goods are defined by Kotler and Keller (2009, p. 320) as “goods that the consumer characteristically compares on such bases as suitability, quality, price, and style”. Moreover, shopping is not restricted to visiting physical stores, but also includes non-store activities such as browsing through catalogs, on-line buying, and even m-commerce (Goldsmith and Flynn, 2005). We would propose that shopping is the intentional self-exposure of a consumer to products available for purchase. Because the activity of shopping is so important to marketers and retailers of every stripe, shopping plays an important role in many theories of consumer behavior. Consequently, researchers have studied shopping behavior from a variety of perspectives, so there is a large body of scholarly literature on the topic. Much of this research is devoted to shopping from the perspectives of information acquisition, decision making, and the influence of marketer controlled elements on the outcome. New research even examines the neurophysiology of shopping (Tan, 2008). Another topic in this field is the examination of individual differences in needs, wants, and motives for shopping. For example, Korgaonkar and Wolin (1999) describe differences in specific shopping styles that influence shopping behavior, and Arnold and Reynolds (2003) describe different hedonic shopping motivations. Shopping enjoyment has received a good deal of attention in the literature. Recent work in that vein demonstrates that “bargain hunters” and “browsers” both may enjoy shopping but the browsers receive more hedonic rewards for their actions (Kim and Kim, 2008). Motivations for shopping can even be studied at the level of a type of product, medium, or segment (e.g., Cowart and Goldsmith, 2007). Studies of this sort show that shopping motives can be generally categorized as utilitarian, social, hedonic, experiential, and cognitive (Babin et al., 1994). The cognitive and emotional aspects of shopping have been combined into a theory of shopping stated as P=(N+F+A)×E2, where “P” is propensity to buy, “N” is need, “F” is features, “A” is affordability and “E” is emotions (Danzinger, 2006). While economic necessity forces nearly everyone to shop, for different consumers shopping portends anything from dreadful boredom to gleeful anticipation. It is thus advantageous for retailers in particular to gain insight into what drives the variation in attitudes toward shopping. Explanations of shopping like the above describe largely conscious motivations. Most of these approaches assume that consumers are aware of and can describe why they shop. However, consumers shop for reasons of which they are probably not aware (Dichter, 1964, Miller, 1998 and Tan, 2008). Some of these motivating factors are individual difference variables that can be described as personality trait-like concepts. In particular, two of these variables, brand engagement and materialism, which influence a variety of consumer behaviors, can be proposed to motivate consumers to shop. Consumers sometimes incorporate brand images into their own self-concepts (Schembri et al., 2010 and Walker, 2008), so that the brand unconsciously helps them become and express who they are and who they show to the world (Sprott et al., 2009). This concept of Brand Engagement in Self-Concept can be operationalized so that its role in influencing consumer behavior can be made explicit. Materialism is defined as a general focus on attaining material possessions and social renown, reflecting Kasser's (2002, p. 1) description. Wanting material goods is an obvious motivation for shopping, as this activity is inherent in acquiring such goods. Although higher materialism is associated with spending and buying, how and whether it motivates shopping has not been ascertained, and neither has the association between brand engagement in self-concept and shopping been assessed. Thus, the purpose of the present study is to examine the relationship between materialism and brand engagement in self-concept and overall consumer attitudes toward shopping. The two studies reported here are predicated on the hypotheses that positive attitudes toward shopping are related to increased levels of materialism and brand engagement in self-concept. The remainder of this paper presents a review of the relevant literature, hypotheses, the methods employed, and a discussion of the findings.

The purpose of the two studies described here was to test hypothesized relationships between brand engagement in self-concept and materialism with positive attitudes toward shopping. The results show that, as hypothesized, the more consumers see brands as a means of expressing self-concept the more they like shopping, a relationship not studied in prior literature. The findings also show that the more consumers embrace a suite of materialistic values, the more likely they are to like shopping. Prior research is also largely silent on this issue, although many of the descriptions of materialism and its consequences link market place behavior such as spending and buying to materialism. Finally, although not a specific objective of the studies, they replicate the positive relationship between materialism and BESC. Sprott et al. (2009) singled out materialism as a key antecedent of BESC. The present studies used an operationalization of materialism (Kasser, 2002) that was different than the one used by Sprott et al. to remove the possibility that mono-operational bias accounts for their findings. Although the evidence is correlational and not experimental, it appears that both viewing brands this way and being materialistic could motivate consumers to shop. Finally, the analyses show that although materialism is conceptualized and measured differently by different scholars, the different dimensions of materialism are related to shopping quite similarly for men and for women. In particular, being attractive and seeking financial success seems to motivate both men and women equally. Similarly, success, happiness, and the centrality of material goods seem to be characteristics of both men and women shoppers. For consumer theory, the findings show that shopping is likely motivated by more than the obvious factors of social and hedonic pleasure. Consumers might easily say that they like to shop because they are bargain seekers, but they might not be aware of the extent to which other influences shape their shopping attitudes. Specifically, materialistic urges and the importance of brands seem to stimulate shopping enjoyment. The findings begin to complete a profile of the active shopper that includes additional psychological factors, even those that consumers are likely not very aware of. Until researchers pose these questions, how aware are consumers of their materialistic urges and do they buy brands to express their identity, would consumers spontaneously volunteer this information? We argue that these motives play an unacknowledged role in this aspect of consumer behavior. Consequently, we feel that additional study should be made of other factors that might motivate consumers to shop. These might include how much consumers use others as standards of comparison, how much they seek status through what they buy, or how they express their feelings of conformity or independence through shopping. Managers can use the findings to help them develop more effective retailing strategies. If some consumers are especially motivated to shop by their engagement with brands, then this benefit can be highlighted in promotions striving to lure shoppers to specific stores and brands. Knowing that materialism is also related to shopping, retailers can emphasize the benefits resulting from acquiring material goods. Specifically, showing that shopping is a way to attain attractiveness and to demonstrate financial success might be a powerful way to motivate customers. Although these themes, especially the former, characterize many retail ads, the findings suggest that they will resonate with both men and women shoppers with materialistic tendencies. Although the results are limited by the specific measures used, the convenience nature of the sample, and by the correlational data, the second study provides a partial replication of the initial findings, enhancing their reliability. Using two different operationalizations of materialism that result in similar findings also enhances our confidence in the conclusion. Future research could expand the generalizability of the results by gathering data from different groups of consumers and by using still other measures of the concepts. Studies can also try to delineate more precisely the elements of promotion that appear specifically to the materialistic motivations studied here. Which is more effective in motivating shoppers, the appeal to attractiveness or to financial success? What promotional elements signal these motives the best? Are there other important motives for shopping that are not covered by the standard treatments of this topic, and if so, what are they? Researchers are encouraged to look for additional concepts that describe unconscious consumer motivation, which can be operationalized validly and reliably, for testing. These efforts will provide us with a detailed picture of shopping and its diverse motivations.