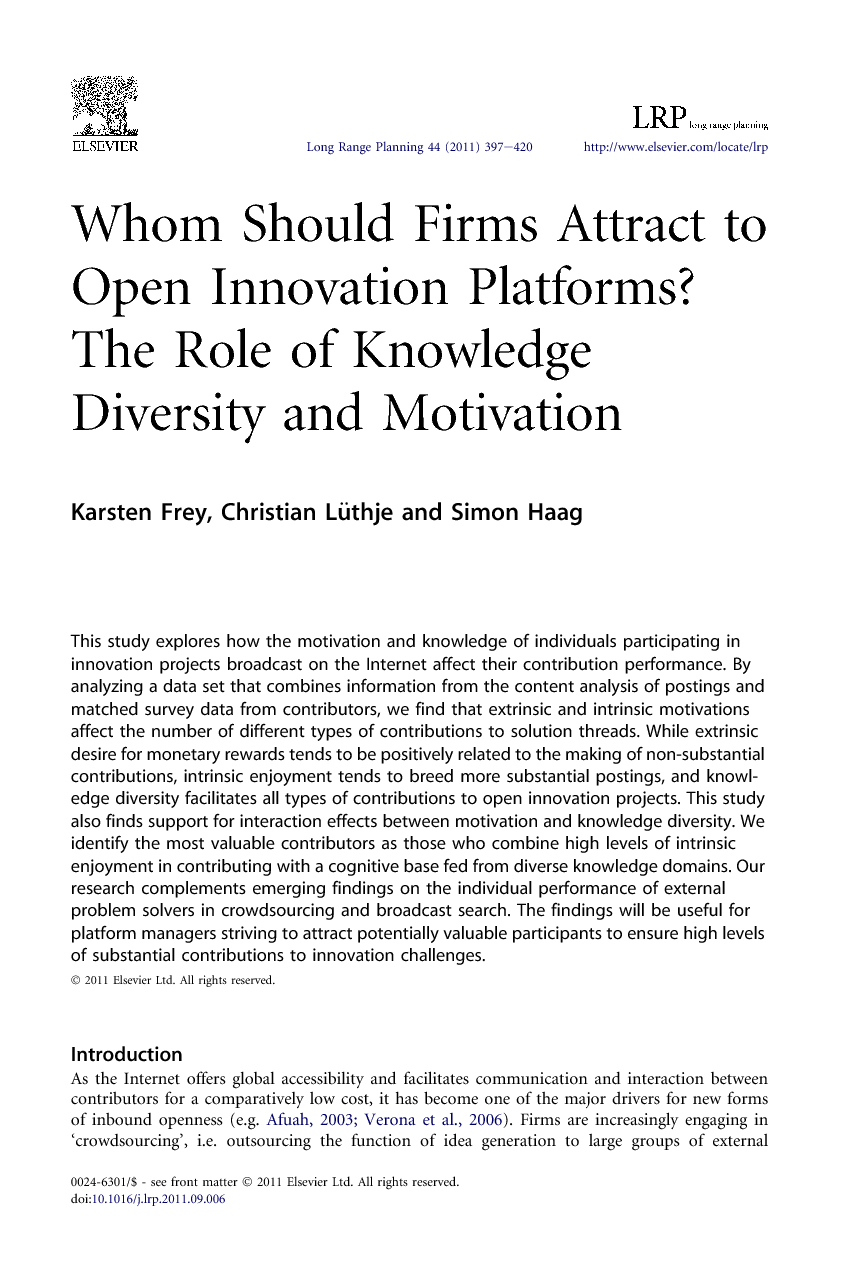 This study explores how the motivation and knowledge of individuals participating in innovation projects broadcast on the Internet affect their contribution performance. By analyzing a data set that combines information from the content analysis of postings and matched survey data from contributors, we find that extrinsic and intrinsic motivations affect the number of different types of contributions to solution threads. While extrinsic desire for monetary rewards tends to be positively related to the making of non-substantial contributions, intrinsic enjoyment tends to breed more substantial postings, and knowledge diversity facilitates all types of contributions to open innovation projects. This study also finds support for interaction effects between motivation and knowledge diversity. We identify the most valuable contributors as those who combine high levels of intrinsic enjoyment in contributing with a cognitive base fed from diverse knowledge domains. Our research complements emerging findings on the individual performance of external problem solvers in crowdsourcing and broadcast search. The findings will be useful for platform managers striving to attract potentially valuable participants to ensure high levels of substantial contributions to innovation challenges.

As the Internet offers global accessibility and facilitates communication and interaction between contributors for a comparatively low cost, it has become one of the major drivers for new forms of inbound openness (e.g. Afuah, 2003 and Verona et al., 2006). Firms are increasingly engaging in ‘crowdsourcing’, i.e. outsourcing the function of idea generation to large groups of external contributors who are often unknown or undefined (Howe, 2008, Kozinets et al., 2008 and Surowiecki, 2005). One viable approach for firms using the crowd as a source of innovation is to disclose the innovation-related problems they face via open innovation platforms on the Internet (Jeppesen and Lakhani, 2010 and Sawhney et al., 2003). In these virtual environments, external experts or users are invited to contribute to solving predefined innovation challenges. The purpose of this study is to advance the understanding of the individual level factors that explain the performance of volunteers who submit new product or service ideas to open projects on Internet-based platforms. More specifically, we concentrate on the roles of motivation and knowledge as determinants of the quality of such individual contributions. In terms of motives, prior empirical work has provided descriptive findings on how contributors to open projects and user communities rate the importance of different motivational dimensions (Hars and Ou, 2002, Hertel et al., 2003 and Lakhani and Wolf, 2005). Nonetheless some motives, although substantial from the contributors’ perspective, may only be weakly associated with contribution performance (Roberts et al., 2006). This study therefore addresses the question of how extrinsic desire for monetary rewards and intrinsic enjoyment of contributing relate to the quality of contributions that individuals make to innovation challenges that are broadcast on the Internet. With respect to individual knowledge, it has often been proposed that the diverse knowledge held by external actors is a key success factor in crowdsourcing (Kozinets et al., 2008, Rosenkopf and Nerkar, 2001 and Stuart and Podolny, 1996), and it is surprising that the existing body of literature offers fairly limited empirical evidence on this notion. We build on the few studies that provide support for the critical role of (marginal) knowledge and investigate how contributors’ knowledge diversity relates to their performance in submitting proposals to open innovation projects (Jeppesen and Lakhani, 2010 and Jeppesen and Laursen, 2009). We extend existing empirical evidence about the relationship between individual factors and the innovation-related performance of firm-external problem solvers in four ways. First, while most studies tend to investigate the characteristics of users working in communities on self-selected problems, this research is based on a field study of individuals who react to predefined problem statements broadcast by firms to an unknown and unrestricted audience. The choice of this unique empirical setting (no user-initiated community, mix of users and non-users, predefined innovation challenges) fits with product and service firms’ growing interest in virtual knowledge brokering and broadcast search (Ebner et al., 2009 and Pisano and Verganti, 2008). Second, the few studies that seek to explain the performance of voluntary contributors to virtual innovation development projects have concentrated on investigating either motives or knowledge-related variables, while this study addresses and answers the question as to how these factors are interrelated as antecedents to contribution performance. Third, by conducting this study in a competition-like setting, where successful contributors can expect to receive predefined monetary prizes, this research contributes findings to the well-established ‘crowding-out’ theory of the interaction between intrinsic and extrinsic motivation. A large number of experimental studies in organizational psychology have shown that, under certain conditions, extrinsic incentives undermine intrinsic motivation (Osterloh and Frey, 2000), and this field study tests whether this trade-off also pertains in the virtual environment of open innovation platforms. Fourth, most studies investigating the participation levels and the performance of community participants rely on self-reported measures (e.g. Füller, 2006, Hertel et al., 2003 and Luthiger and Jungwirth, 2007). To avoid the risk of a common method bias, this research uses different sources of information to measure the model’s exogenous and endogenous variables. Specifically, we conducted a survey to obtain data on respondents’ motivation and knowledge diversity, but collected our data on participants’ contributions to innovation projects via server log file analysis and the content analysis of more than 1,400 of their postings. By coding the contributions according to their novelty for the solution development process and their relevance to the end solution, this study provides rich and differentiated findings on individual contribution performance. Our empirical setting is the online commercial innovation platform Atizo, which was created by a Swiss start-up company, and which operates - in the same way as InnoCentive - as a knowledge broker between firms aiming to broadcast innovation challenges and a group of external contributors posting solution elements to those challenges (Jeppesen and Lakhani, 2010 and Verona et al., 2006). This article starts with a discussion of the study’s conceptual background, after which we derive a research model to examine variables that explain the number and quality of participants’ contributions to predefined innovation challenges. We then test the research model through survey and server data obtained from Atizo, and finally we discuss our empirical findings and describe their practical implications.