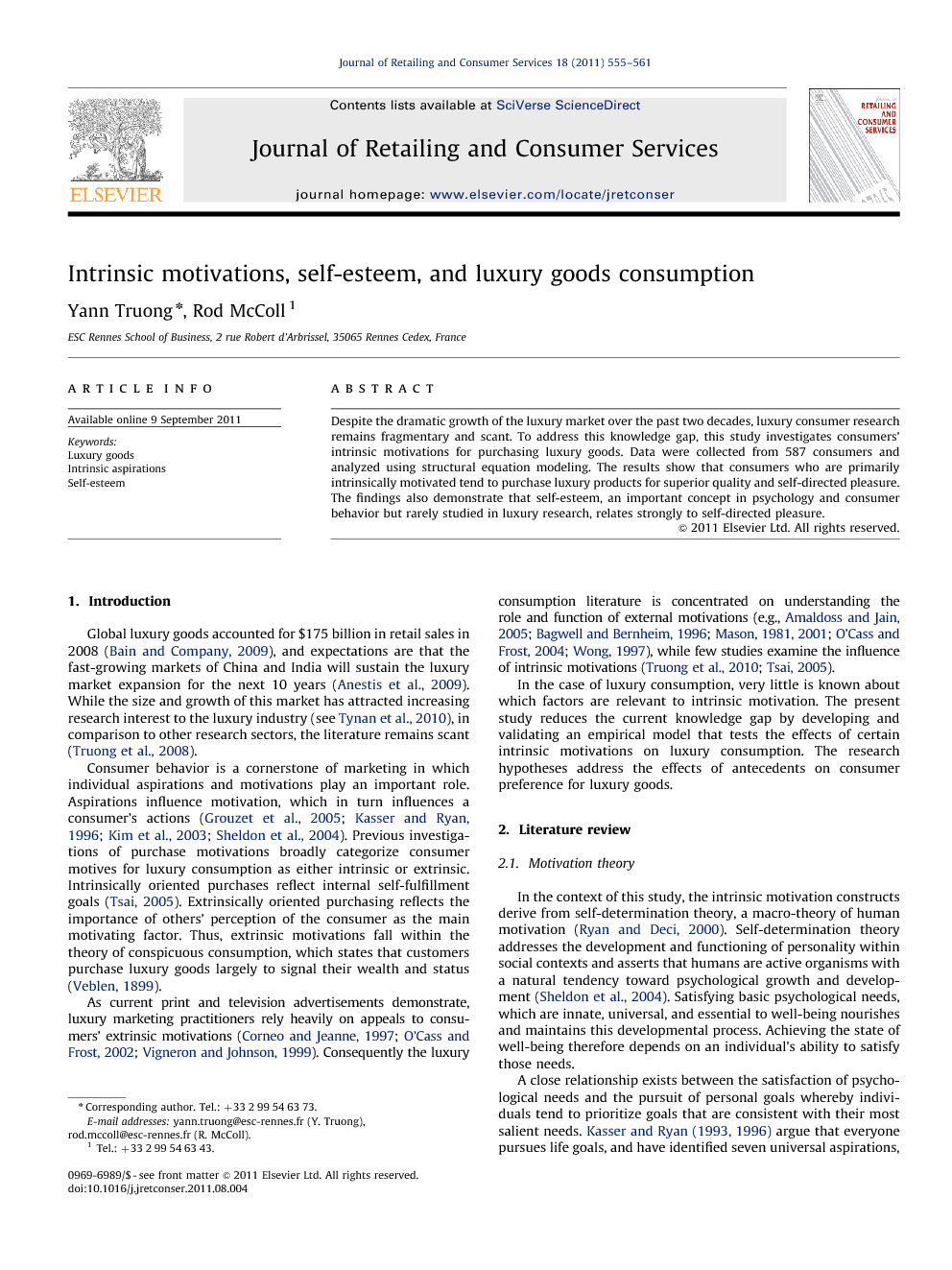 Despite the dramatic growth of the luxury market over the past two decades, luxury consumer research remains fragmentary and scant. To address this knowledge gap, this study investigates consumers' intrinsic motivations for purchasing luxury goods. Data were collected from 587 consumers and analyzed using structural equation modeling. The results show that consumers who are primarily intrinsically motivated tend to purchase luxury products for superior quality and self-directed pleasure. The findings also demonstrate that self-esteem, an important concept in psychology and consumer behavior but rarely studied in luxury research, relates strongly to self-directed pleasure.

Global luxury goods accounted for $175 billion in retail sales in 2008 (Bain and Company, 2009), and expectations are that the fast-growing markets of China and India will sustain the luxury market expansion for the next 10 years (Anestis et al., 2009). While the size and growth of this market has attracted increasing research interest to the luxury industry (see Tynan et al., 2010), in comparison to other research sectors, the literature remains scant (Truong et al., 2008). Consumer behavior is a cornerstone of marketing in which individual aspirations and motivations play an important role. Aspirations influence motivation, which in turn influences a consumer's actions (Grouzet et al., 2005, Kasser and Ryan, 1996, Kim et al., 2003 and Sheldon et al., 2004). Previous investigations of purchase motivations broadly categorize consumer motives for luxury consumption as either intrinsic or extrinsic. Intrinsically oriented purchases reflect internal self-fulfillment goals (Tsai, 2005). Extrinsically oriented purchasing reflects the importance of others' perception of the consumer as the main motivating factor. Thus, extrinsic motivations fall within the theory of conspicuous consumption, which states that customers purchase luxury goods largely to signal their wealth and status (Veblen, 1899). As current print and television advertisements demonstrate, luxury marketing practitioners rely heavily on appeals to consumers' extrinsic motivations (Corneo and Jeanne, 1997, O'Cass and Frost, 2002 and Vigneron and Johnson, 1999). Consequently the luxury consumption literature is concentrated on understanding the role and function of external motivations (e.g., Amaldoss and Jain, 2005, Bagwell and Bernheim, 1996, Mason, 1981, Mason, 2001, O'Cass and Frost, 2004 and Wong, 1997), while few studies examine the influence of intrinsic motivations (Truong et al., 2010 and Tsai, 2005). In the case of luxury consumption, very little is known about which factors are relevant to intrinsic motivation. The present study reduces the current knowledge gap by developing and validating an empirical model that tests the effects of certain intrinsic motivations on luxury consumption. The research hypotheses address the effects of antecedents on consumer preference for luxury goods. 2. Literature review

Past studies in luxury consumption behavior focus largely on motivations for conspicuous consumption (Bagwell and Bernheim, 1996, Hong and Zinkhan, 1995, Mason, 1998, Mason, 2001 and O'Cass and Frost, 2004). In most of these studies, samples have tended to be drawn wealthy consumers. This approach makes sense within a narrow definition of luxury, but aspirations can exist independently of actual wealth and status. Global growth in disposable incomes has enabled middle and lower-class consumers to aspire to the lifestyle of the truly wealthy and to become occasional luxury customers (Miles Homer, 2008, Rusli, 2010 and Silverstein and Fiske, 2005). This study includes middle-class as well as wealthy consumers using aspirational-oriented constructs rather than actual achievement constructs. The findings confirm that intrinsically motivated consumers of luxury goods tend to look at the actual quality of the product and its ability to provide self-directed pleasure than whether the product allows the customer to demonstrate conspicuous consumption. Furthermore, the relationship between self-esteem and self-directed pleasure proves to be very salient, suggesting that purchasing luxury goods as a self-reward may be a powerful way to satisfy one's need for self-esteem. 6.1. Research contributions This research makes two important contributions to the luxury marketing literature. First, the study extends the debate on the relative importance of extrinsic versus intrinsic motivations in the purchase of luxury goods, by confirming the importance of two variables—desire for quality and self-directed pleasure for intrinsically motivated luxury consumers. Prior academic research focuses almost exclusively on the role of extrinsic motivations, which accords with the practice within the luxury market of communicating with consumers through themes built around extrinsic motivations. Only recently have researchers begun to consider the role of internally driven motivations in the purchase of luxury products. Given the growing number of intrinsic rather than extrinsically motivated individuals (Kim et al., 2003 and Sheldon et al., 2001), research in luxury marketing needs to grant more importance to intrinsic motivations as antecedents of consumption. Second, the study expands our understanding of the relationship between self-esteem and luxury consumption. Self-esteem has often been a strong determinant of consumer behavior, especially for high-involvement products (Crocker and Park, 2004a and Ferraro et al., 2005). Research in social psychology shows that individuals tend to engage in materialistic behavior when their self-esteem is low (Braun and Wicklund, 1989, Chang and Arkin, 2002 and Kasser, 2001). However, despite the importance of self-esteem in shaping consumer behavior, the extant literature contains few reports of the effects of self-esteem in luxury consumption. This study finds a very strong relationship between self-esteem and the consumption of luxury goods for self-directed pleasure, suggesting that an individual can maintain or boost self-esteem by purchasing luxury goods. However, more importantly given current academic and practitioner opinion to the contrary, self-esteem does not relate strongly to conspicuous consumption. Rather, the study shows that internal forces drive motivation for self-esteem, which only self-directed pleasure can satisfy. This finding should encourage future researchers to include self-esteem as an antecedent of luxury consumption behavior. 6.2. Managerial implications Although some well known luxury brands have recently used advertising themes of superior quality and personal experience (e.g., Louis Vuitton, L'Oreal, and several watch and German car manufacturers), current luxury advertising generally communicates using themes, which appeal to consumers whose dominant motivation is conspicuous consumption. However, recent studies allude to a growth in the number of luxury consumers who may be more intrinsically motivated (Silverstein and Fiske, 2003, Silverstein and Fiske, 2005 and Tsai, 2005). The findings from this study indicate that, instead, quality and self-directed pleasure are particularly salient to consumers who primarily pursue intrinsic motivations. Self-esteem also appears to be an important motivator in purchasing luxury goods for self-directed pleasure. This finding indicates that marketing luxury goods using themes that appeal to status seekers may not be the most effective way of reaching all luxury consumers. Given the universal nature for an individual to maintain self-esteem (Pyszczynski et al., 2004 and Sheldon et al., 2001), appealing to consumers' self-esteem may be a more effective way to increase their desire to acquire luxury products. Employees of luxury stores should be conscious of the different purchase motivations of consumers in this category and adapt sales techniques where appropriate.