عنوان انگلیسی
The psychology of economic transformation: The impact of the market on social institutions, status and values in a northern Albanian village
دانلود فوری مقاله + سفارش ترجمه 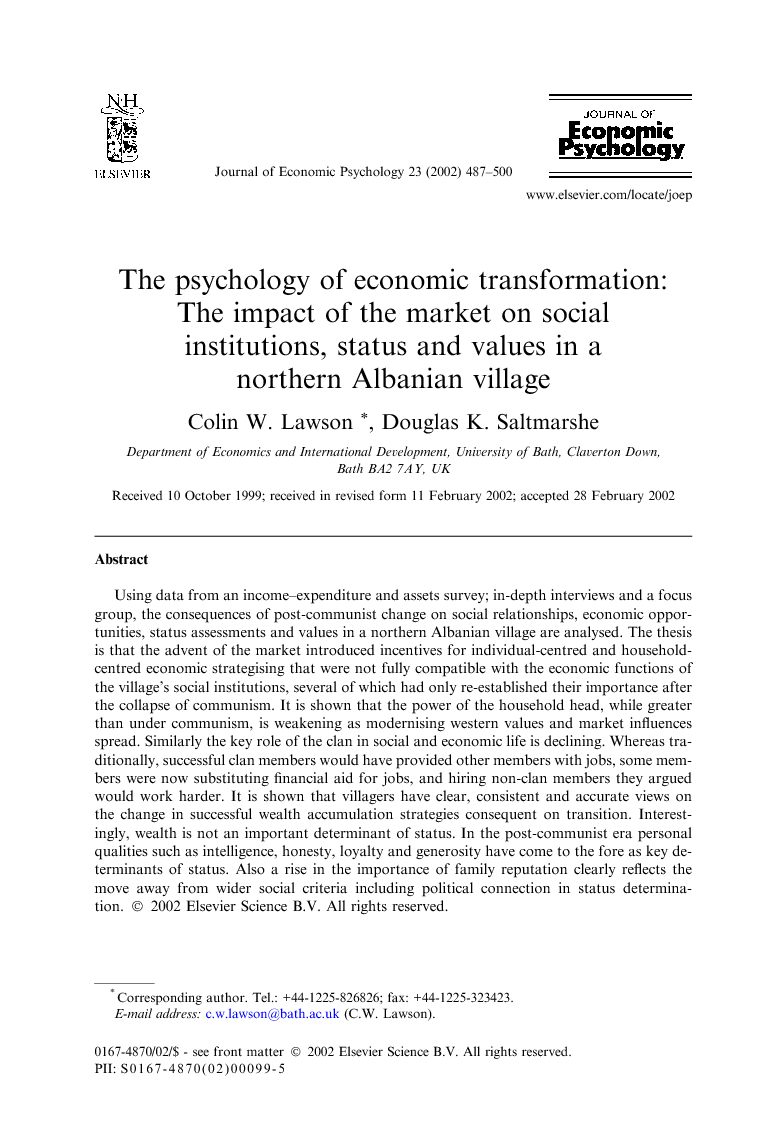 Using data from an income–expenditure and assets survey; in-depth interviews and a focus group, the consequences of post-communist change on social relationships, economic opportunities, status assessments and values in a northern Albanian village are analysed. The thesis is that the advent of the market introduced incentives for individual-centred and household-centred economic strategising that were not fully compatible with the economic functions of the village's social institutions, several of which had only re-established their importance after the collapse of communism. It is shown that the power of the household head, while greater than under communism, is weakening as modernising western values and market influences spread. Similarly the key role of the clan in social and economic life is declining. Whereas traditionally, successful clan members would have provided other members with jobs, some members were now substituting financial aid for jobs, and hiring non-clan members they argued would work harder. It is shown that villagers have clear, consistent and accurate views on the change in successful wealth accumulation strategies consequent on transition. Interestingly, wealth is not an important determinant of status. In the post-communist era personal qualities such as intelligence, honesty, loyalty and generosity have come to the fore as key determinants of status. Also a rise in the importance of family reputation clearly reflects the move away from wider social criteria including political connection in status determination.

This paper analyses the impact of recent systemic changes on values, social relationships and economic opportunities in a northern Albanian village. It explores the extent to which the rapid switch in 1991 from central planning to a market system, following the collapse of Albanian communism, has influenced the development of community institutions, changed the relative importance of different wealth accumulation strategies and altered the values, especially the economic values and social status judgements, which underpin the operation of this community. The village investigation is thus a case-study of value change in transition. It forms part of larger inquiry into strategies of poverty alleviation, the economic results of which are reported in Lawson, McGregor, and Saltmarshe (2000). Although there is a large literature on the economic impact of transition on former communist societies, the literature on value change is limited. While general values, that is the significance for individuals of work, family, politics and religion are similar in western and eastern Europe (Van den Broek & De Moor, 1993) there are marked differences in other respects. For example `[w]estern respondents place greater emphasis on taking initiative, achievement and having a responsible job, while eastern European subjects report less autonomy, pride, and satisfaction in their work' (Roe, Zinovieva, Dienes, & Ten Horn, 2000, p. 660). Perhaps because of experience and necessity, bribery and tax evasion are seen as less reprehensible in the transition states (Tyszka, 1999). Part of the purpose of our study was to relate value change to social change. Values are expressed by individuals, but their ownership is social (Lewis, Webley, & Furnham, 1995). Value change may be linked to changes in social institutions, and transition drives changes in social institutions. The thesis underlying the paper is that market relations encourage a nuclear family centred, or individual-centred economic strategy. Such a strategy is incompatible with some of the most important social institutions that determine social life in the fieldwork site village. The more notable of these institutions are the household (shtëpi), groups of brothers (vllazni) and the clan (fis). As a result of market incentives these institutions are changing their economic functions, and as they do so economic values are gradually becoming more consonant with a modern market system. However since social institutions strongly influence behaviour, the process of change is slow. The history of the institutions lies in tribal relations that have persisted in Albanian communities probably to a greater degree than in any other ethnic groups in the Balkans. Since these institutions are closely related to the value systems whose changes we record, they require brief explanations. The institutions we describe are stronger in the north than in the south of Albania. They were strongly discouraged under communism (1944–1991). The key unit is the clan. Traditionally it comprised households composed of close male relatives: brothers, uncles and cousins. Together these blood relations constitute the vllazni (group of brothers). Until Albania underwent a form of modernisation during the communist period, the extended household was a single residential and economic unit, with as many as seventy members ( Durham, 1928 and Durham, 1987). However in our survey the largest household had 11 members, and the average size was 5.2. In the past adult males chose the household head. His dominant position was a reflection of the strong patriarchal traditions of the Balkans. When households split, the head of the original household would retain a degree of authority over the new household, as being the elder (plak) of the vllazni. A village comprised a number of such kin groups. The head of the strongest group was known as the chief elder (kryeplak). However he did not wield arbitrary power. His authority was constrained by the influence and opinions of the other village elders. This prevented the over-concentration of power that, had it existed, would have undermined the social solidarity vital for the survival of the clan. The value system of the clan emphasised solidarity. Traditionally each adult male was encouraged to regard everything in the house as his personal property. Any success of the village was his success, any slight to its honour was an offence against him. It is not difficult to see why the Albanian communist party felt the need to suppress these institutions and their associated values, and to redirect loyalty towards the party and the nation state (Saltmarshe, 2001). The end of communism saw the re-emergence of the social institutions that formerly had been suppressed. This was especially so in the north of the country. For many the vllazni remains an important institution. As one village respondent put it, “No one in the world can ever achieve the closeness that comes through blood. The first person to help you is your brother”. The revival of traditional institutions and their associated value systems took place against a general background of economic collapse and dislocation. For example, the end of planning in 1991 saw GDP fall by 40% (EBRD, 1995). At the same time the growth of market relations sapped the economic power bases of traditional social institutions, emphasising the importance of individual or family centred decision-making. This paper provides a micro-level study in a precise cultural context. It links institutional and value change in a post-communist society with the specific circumstances facing individuals and a community. There are three further sections. The first describes the village and the methodology. The second presents and discusses the results, and the third draws some conclusions.

The thesis of this paper is that the advent of the market in Albania introduced incentives for individual-centred and household-centred economic strategising. But such strategising was not fully compatible with the economic functions of the village's social institutions, several of which had only re-established their importance after the demise of communism in 1991. These social institutions – or at least their economic functions – were adapting as a result of evolving values, to become more consonant with the market system. The paper shows how the economic role of the household was strengthened by the collapse of state planning, as the need to find work to replace state employment focused more decision-making on the individual and the family. Although greater than under communism, we suggested that the power of the household head was less than before communism, and was weakening with the spread of western values and the influence of the market. We also suggested that the economic position of women had been weakened by the collapse in available jobs, but that some of the previous dual burden of workplace and household responsibilities had been lightened. Moreover the legal availability of contraception and the end of an explicitly pro-natalist policy had reduced the pressure to have children, and this reduction was likely to be reinforced by the move to household-centred or individual-centred economic strategising. We reported that the vllazni had reattained some economic importance as a source of economic insurance, and to a limited extent as a framework for business. However although the system of joint production had re-emerged, it was always uncommon in northern Albania, and was likely to remain so. A much more significant example of the return of a tradition, was the growth in the importance of the clan after 1991, mainly because of increased economic uncertainty. The clan remains of significant economic importance for many of its members, especially the poorer ones. But as we have noted, some more successful clan members have started to substitute financial aid for jobs in fulfilling their clan obligations. Market incentives have encouraged them to adopt this profit-maximising policy because hiring non-clan members is more cost effective for them. Their generosity buys them room for manoeuvre in the labour market, in terms of choosing whom they hire. It also increases their status. We used a focus group to explore directly what impact people felt recent changes had had on strategies for accumulating wealth and achieving status. The results show the remarkable uniformity in implicit and explicit judgmental criteria across individuals, which we would associate with a closely knit village community. The changes in rankings across regimes is substantial, yet all focus group members agreed on the general pattern of the changes, and many agreed on the fine detail of the ranking changes. While we might have expected differences according to the age, sex or religion of the respondent, any recorded variations are dwarfed by the size of the basic judgmental agreements. The post-communist situation we have described is one where economic circumstances had altered wealth creation options and where the reinvigoration of traditional social institutions had helped to alter the criteria for according respect. We have reported how individuals from a relatively traditional Albanian village demonstrated great awareness of the demands of the new system and showed a capacity to adapt to change. Some expressed loss; some regret; some apprehension; and some welcomed the changes in opportunities, and in social and economic values. All recognised that the process was unfinished and continuing.