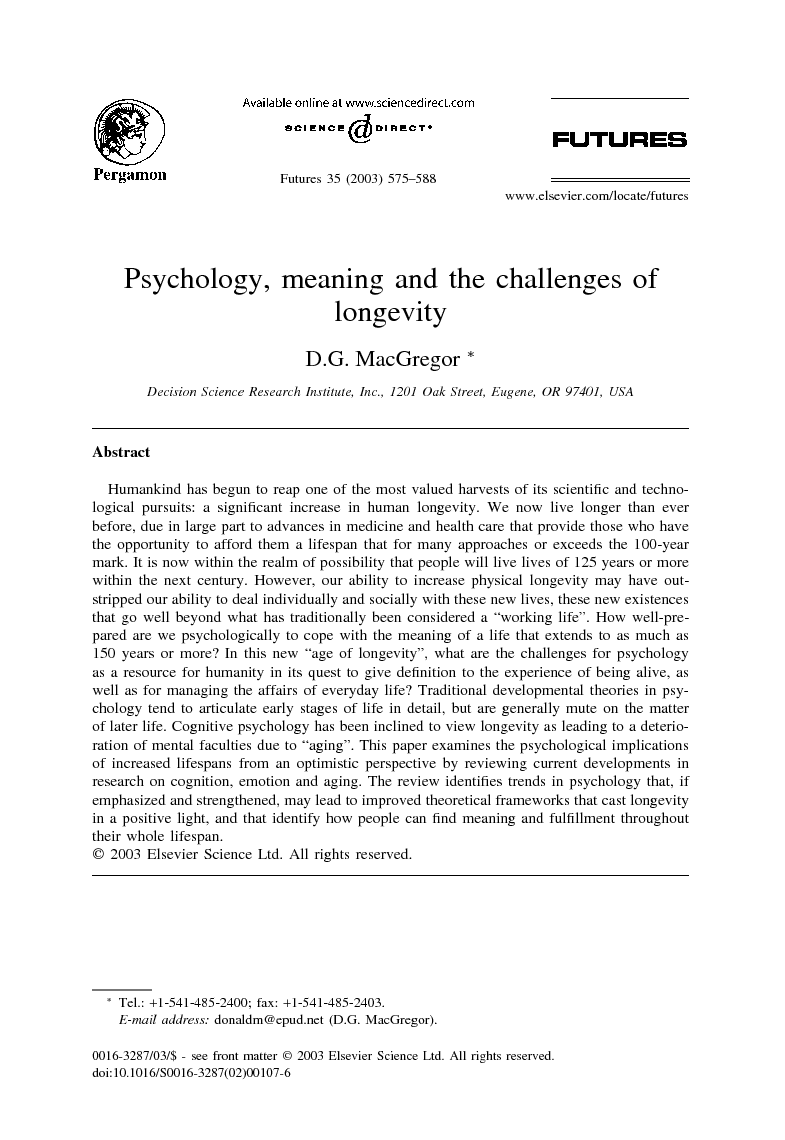 Humankind has begun to reap one of the most valued harvests of its scientific and technological pursuits: a significant increase in human longevity. We now live longer than ever before, due in large part to advances in medicine and health care that provide those who have the opportunity to afford them a lifespan that for many approaches or exceeds the 100-year mark. It is now within the realm of possibility that people will live lives of 125 years or more within the next century. However, our ability to increase physical longevity may have outstripped our ability to deal individually and socially with these new lives, these new existences that go well beyond what has traditionally been considered a “working life”. How well-prepared are we psychologically to cope with the meaning of a life that extends to as much as 150 years or more? In this new “age of longevity”, what are the challenges for psychology as a resource for humanity in its quest to give definition to the experience of being alive, as well as for managing the affairs of everyday life? Traditional developmental theories in psychology tend to articulate early stages of life in detail, but are generally mute on the matter of later life. Cognitive psychology has been inclined to view longevity as leading to a deterioration of mental faculties due to “aging”. This paper examines the psychological implications of increased lifespans from an optimistic perspective by reviewing current developments in research on cognition, emotion and aging. The review identifies trends in psychology that, if emphasized and strengthened, may lead to improved theoretical frameworks that cast longevity in a positive light, and that identify how people can find meaning and fulfillment throughout their whole lifespan.

As with many other social phenomenon, attitudes and actions often change in the overwhelming face of demography. Though demographic trends may not be particularly interesting or elegant as theories, their power and influence is often unassailable. We in the United States are growing older as a nation. Within 10 years, the leading edge of the baby boomer generation, defined as those born between 1946 and 1964, will begin to retire. By some estimates, their exodus from the full-time workforce, could begin within seven or eight years [7]. However, unlike most previous generations, this new generation of post-workforce adults is not likely to enter their hermitage years without defining them in their own terms, as they have for all of the stages of their life heretofore. The baby boomer generation has, as a cohort, defined the American value system for two decades and, as a cohort, has the largest wealth accumulation in history. So, what is the baby boomer generation planning to do with its additional longevity? From what wellsprings and values do they expect to draw meaning from life? It is difficult to look upon the past three or four decades without noticing the enormous accumulation of wealth that accrued to the boomer generation. Not only do they burgeon in numbers, but in economics as well. As a cohort, they are the best-educated and richest group to have lived in the United States, and perhaps in the world. One reflection of how they see their own future is captured in how they anticipate using their accumulated wealth in retirement. Table 1 shows partial results from a survey of “leading-edge” baby boomers—those who are in the age range of 45–55 years and who will enter retirement in perhaps 7–10 years. These data are from a national telephone survey of 400 households conducted in the spring of 2000 [7]. Individuals surveyed were asked about their plans for retirement, including how they planned to use their wealth, concerns they have about retirement, and details of their financial planning.The entries in Table 1 are the percentage of respondents indicating that each of the uses of wealth shown were “very important”. The interesting result is not so much that these pre-retirees were most inclined to use their wealth for basic financial support and health care, as the relatively small numbers of people who plan to use their wealth for purposes beyond themselves. Bequeathment (e.g. gifts to children, charity) were among the uses of wealth deemed least important. Though people talk much these days of accumulating wealth and building estates, the reality appears to be that their plans are to consume within their own lifetime whatever they have accumulated during their income-earning years. The notion of estate building in the classical sense of leaving a financial legacy to one’s progeny and their future generations is largely absent from what we might call the broader middle class concept of wealth. If the contents of Table 1 are truly reflective of where the wealthiest generation is with respect to thinking about the future, the future does indeed have a very short-term definition. Furthermore, if we consider how people manage their financial lives in contemporary society, we can see that one of the greatest risks to the concept of “future” is to the very definition of future itself. By and large, those who seek to secure their financial future do so by investment in markets. Yet when we observe the investment behavior of market participants, we see that what many people do when they “invest” is actually more akin to speculation. Though people tout the long-term expectation of financial markets as a reason to invest, their expectations of market returns are based largely on only the most recent years, which have generally been high. Moreover, when people judge how well markets will do in the future, their judgments bear little relationship to the actual potential for returns, and are strongly rooted in images and perceptions [8]. In contemporary society, long-term investing is often a matter of months, rather than a matter of years. For many people, the concept of a time horizon has become drastically shortened to the point that the notion of a future beyond a matter of a few years is psychologically meaningless, at least in the context of investment. As people approach their retirement years, with their wealth in hand, what do they anticipate will be their challenges? What will dominate their interests and their concerns? Table 2 provides some indication that though people expect to accumulate wealth, they expect to worry about how to spend it.While people appear to have strong concerns about some types of costs, such as health care, and with having enough money in general, their concerns are not uniform across all categories of life’s basic needs. For example, people worry much less about transportation costs than about taxes. But an interesting aspect of the data in Table 2 is how concerned people are about “being happy”. With some inferential leaping, we can conjecture that perhaps at the core of it all people recognize the limits of material wealth to provide them what they perhaps most want. Some support for this conjecture comes from an additional result of the survey: less than 5% of respondents expected support in retirement from children and family. These results provide yet another indication of the breakdown of the nuclear family in the United States, and the growing tendency of adults in retirement to live apart from their children.

“The waters of a flowing stream are ever present but never the same; the bubbles in a quiet pool disappear and form but never endure for long. So it is with men and their dwellings in the world.” Kamo no Chōmei “An Account of My Hermitage”[23] I hope to gain continual and deepening satisfaction from life as I pass along its various stages; not from participation in life as a material enterprise, but from life itself. However, in our modern society, it is increasingly difficult to separate life from the context of economic goods and values that surrounds us. If the first of life is meant to be a time of accumulation, such that the last of life is the time for the enjoyments that accompany the expenditure of that accumulation, then society today is well on its way to affirming Browning’s proclamation. However, if we adopt a more Eastern take on Browning, then perhaps we can see that the first of life is a time for experience, and the last of life is a time for realization of the transitory nature of the materialisms that humans create. According to Eastern standards, by the last of life we should be shedding our attachments to a personal identity that draws its definition from the things we own. Contrary to contemporary Western thinking, the older we get, the less we should have, because we simply care less about “having”. Psychology’s future lies in part in helping us understand how to conquer desire, and how to be more comfortable and resolved in the last of life for which the first was made.