عنوان انگلیسی
On the psychology of ‘if only’: Regret and the comparison between factual and counterfactual outcomes
دانلود فوری مقاله + سفارش ترجمه 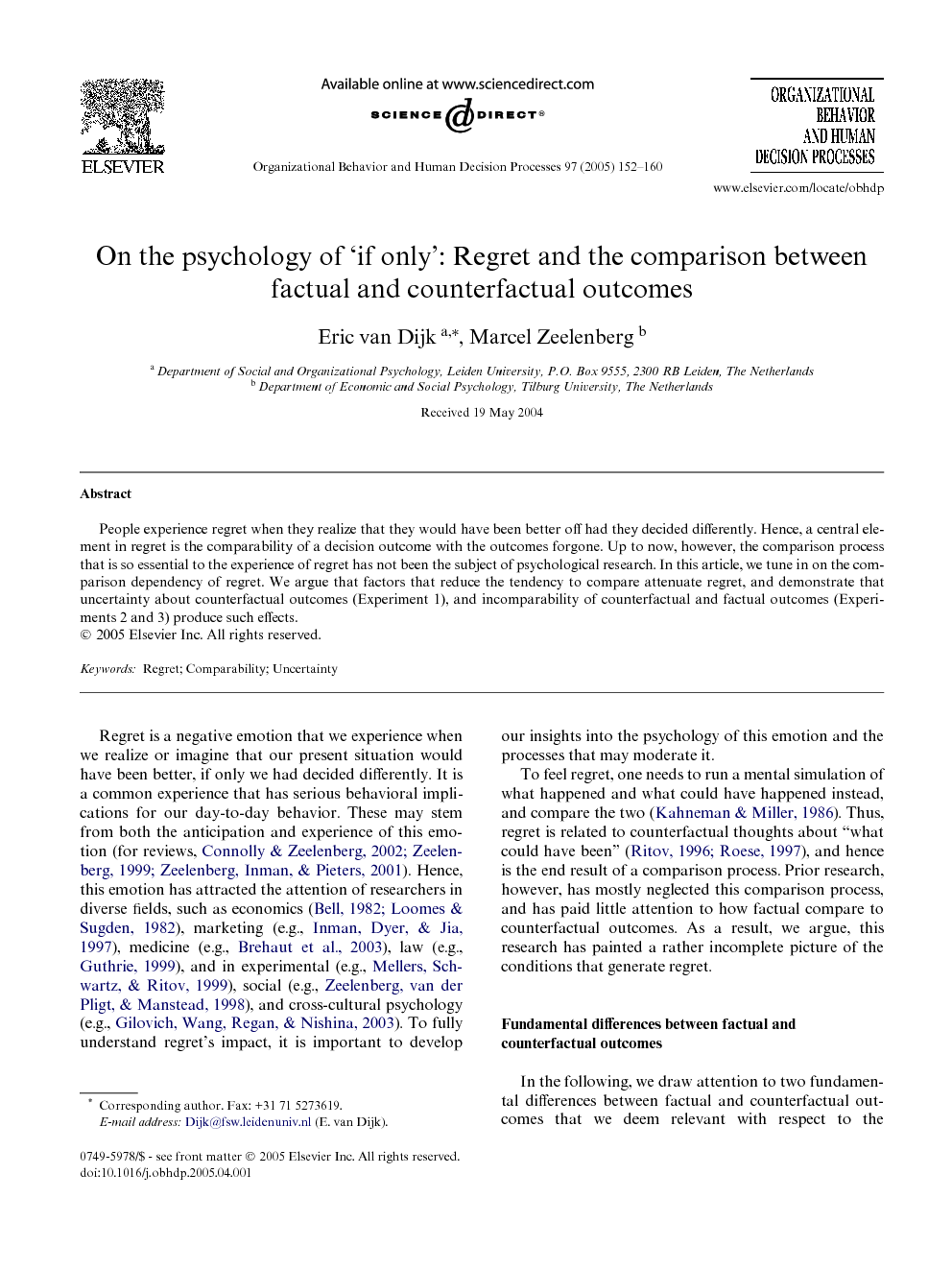 People experience regret when they realize that they would have been better off had they decided differently. Hence, a central element in regret is the comparability of a decision outcome with the outcomes forgone. Up to now, however, the comparison process that is so essential to the experience of regret has not been the subject of psychological research. In this article, we tune in on the comparison dependency of regret. We argue that factors that reduce the tendency to compare attenuate regret, and demonstrate that uncertainty about counterfactual outcomes (Experiment 1), and incomparability of counterfactual and factual outcomes (Experiments 2 and 3) produce such effects.

Regret is a negative emotion that we experience when we realize or imagine that our present situation would have been better, if only we had decided differently. It is a common experience that has serious behavioral implications for our day-to-day behavior. These may stem from both the anticipation and experience of this emotion (for reviews, Connolly and Zeelenberg, 2002, Zeelenberg, 1999 and Zeelenberg et al., 2001). Hence, this emotion has attracted the attention of researchers in diverse fields, such as economics (Bell, 1982 and Loomes and Sugden, 1982), marketing (e.g., Inman, Dyer, & Jia, 1997), medicine (e.g., Brehaut et al., 2003), law (e.g., Guthrie, 1999), and in experimental (e.g., Mellers, Schwartz, & Ritov, 1999), social (e.g., Zeelenberg, van der Pligt, & Manstead, 1998), and cross-cultural psychology (e.g., Gilovich, Wang, Regan, & Nishina, 2003). To fully understand regret’s impact, it is important to develop our insights into the psychology of this emotion and the processes that may moderate it. To feel regret, one needs to run a mental simulation of what happened and what could have happened instead, and compare the two (Kahneman & Miller, 1986). Thus, regret is related to counterfactual thoughts about “what could have been” (Ritov, 1996 and Roese, 1997), and hence is the end result of a comparison process. Prior research, however, has mostly neglected this comparison process, and has paid little attention to how factual compare to counterfactual outcomes. As a result, we argue, this research has painted a rather incomplete picture of the conditions that generate regret.