عنوان انگلیسی
Twenty-five years of the Journal of Economic Psychology (1981–2005): A report on the development of an interdisciplinary field of research
دانلود فوری مقاله + سفارش ترجمه 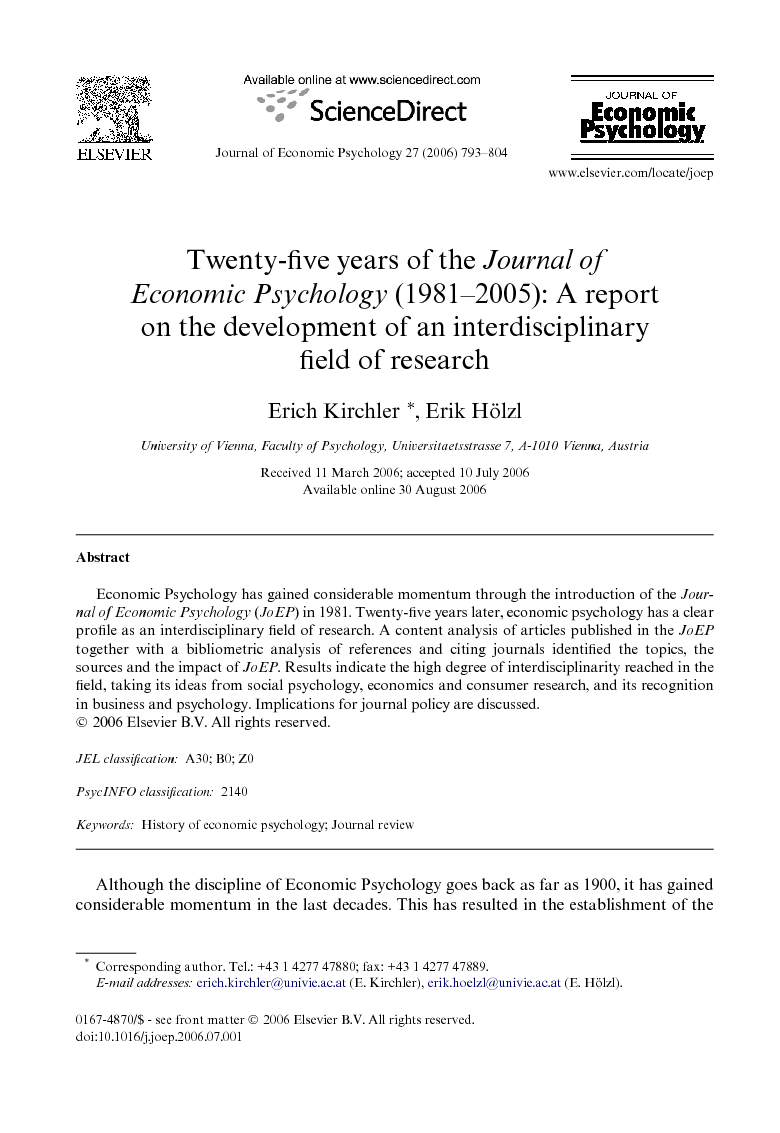 Economic Psychology has gained considerable momentum through the introduction of the Journal of Economic Psychology (JoEP) in 1981. Twenty-five years later, economic psychology has a clear profile as an interdisciplinary field of research. A content analysis of articles published in the JoEP together with a bibliometric analysis of references and citing journals identified the topics, the sources and the impact of JoEP. Results indicate the high degree of interdisciplinarity reached in the field, taking its ideas from social psychology, economics and consumer research, and its recognition in business and psychology. Implications for journal policy are discussed.

Although the discipline of Economic Psychology goes back as far as 1900, it has gained considerable momentum in the last decades. This has resulted in the establishment of the International Association for Research in Economic Psychology (IAREP), in annual colloquia and workshops as well as in close collaboration with the Society for the Advancement of Behavioral Economics (SABE). A major step towards the institutionalisation and recognition of the discipline in the scientific community has been the introduction of the Journal of Economic Psychology (JoEP) in 1981. The aim of the Journal is to bridge the gap between economics, business and marketing, and applied psychology and to provide a forum for researchers whose work crosses the borders of these disciplines. After 25 years, a look at the development of the field, mirrored in the publications of the JoEP, may show the core topics and the degree of mutual cooperation. Bibliometric analyses of journals provide insight in developmental trends and the status quo of a discipline and can inform journal policy ( Alon et al., 2002, Bettencourt and Houston, 2001 and Quiñones-Vidal et al., 2004). The present article starts with an overview of the structure of the JoEP and its authorship. Second, a topical analysis of the papers published in the journal from its inception in 1981–2005 is presented. Third, a bibliometric analysis follows, locating the main sources of economic psychology. We analyze what publications and journals are most frequently cited in JoEP. Finally, we identify those journals in which the JoEP was most frequently cited, and make some suggestions for journal policy.

Since its beginnings, the JoEP has attracted researchers from different fields in applied psychology, in behavioural economics and economic psychology as well as consumer research and marketing. Diversity is an issue of journal policy on several levels: on the level of country affiliation of authors, on the level of topics pursued, and the level of references used. On all these levels, diversity has increased during the history of the JoEP. The journal attracts authors from an increasing number of countries, although it is still predominantly Europe-based. The topics have become somewhat more varied over time, as have the main journals cited. The analysis of topics shows the wide scope of economic psychology, ranging from individual decision making to macroeconomic issues. After a search for identity in the first years of the Journal, core topics of economic psychology have emerged. The majority of core topics relates to economic psychology, behavioural economics, and consumer behaviour. A closer look at the sources shows that the JoEP draws on journals from social psychology, consumer research and economics, reflecting its interdisciplinary nature. Among the most cited works are Kahneman and Tversky’s papers on prospect theory ( Kahneman and Tversky, 1979 and Tversky and Kahneman, 1981), Fishbein and Ajzen’s books on attitudes and behaviour ( Ajzen and Fishbein, 1980 and Fishbein and Ajzen, 1975), and classics on economic psychology by Katona, 1975 and Lea et al., 1987. Over the years, the number of economic psychology by Katona, 1975 and Lea et al., 1987. Over the years, the number of references per article has increased, as has the diversity of references. Among the recipients of the JoEP are mainly journals from business and marketing, applied social psychology, and decision making. The JoEP as an interdisciplinary journal has its distinct advantages and challenges. Major advantages are that it forms a bridge between disciplines, it contributes both to theory development and application, and it publishes research important for practitioners in economics and policy. A major challenge is that it is competing with established outlets that specialize on less broadly defined fields, such as decision making, marketing and advertisement, or consumer research. It is therefore advisable to strengthen strategies to increase visibility of the Journal in neighbouring disciplines. Besides maintaining and further advancing the high quality of research published in the journal, it is necessary to promote the Journal. For instance, useful strategies to put the journal into the focus of attention could be to attract well-known researchers to publish in the journal, or to invite researchers to submit reviews or meta-analyses that provide an overview of the state-of-the-art in a particular field within economic psychology. It may also prove useful to inform communities of researchers in the fields of economics, social psychology, marketing and consumer behaviour, by submitting to their newsletters summaries of the results of high quality articles published in the journal. For instance, the APA Monitor on Psychology is regularly presenting summaries of highly relevant articles, and thus advertising not only the respective scientific work, but also the media in which it is published.