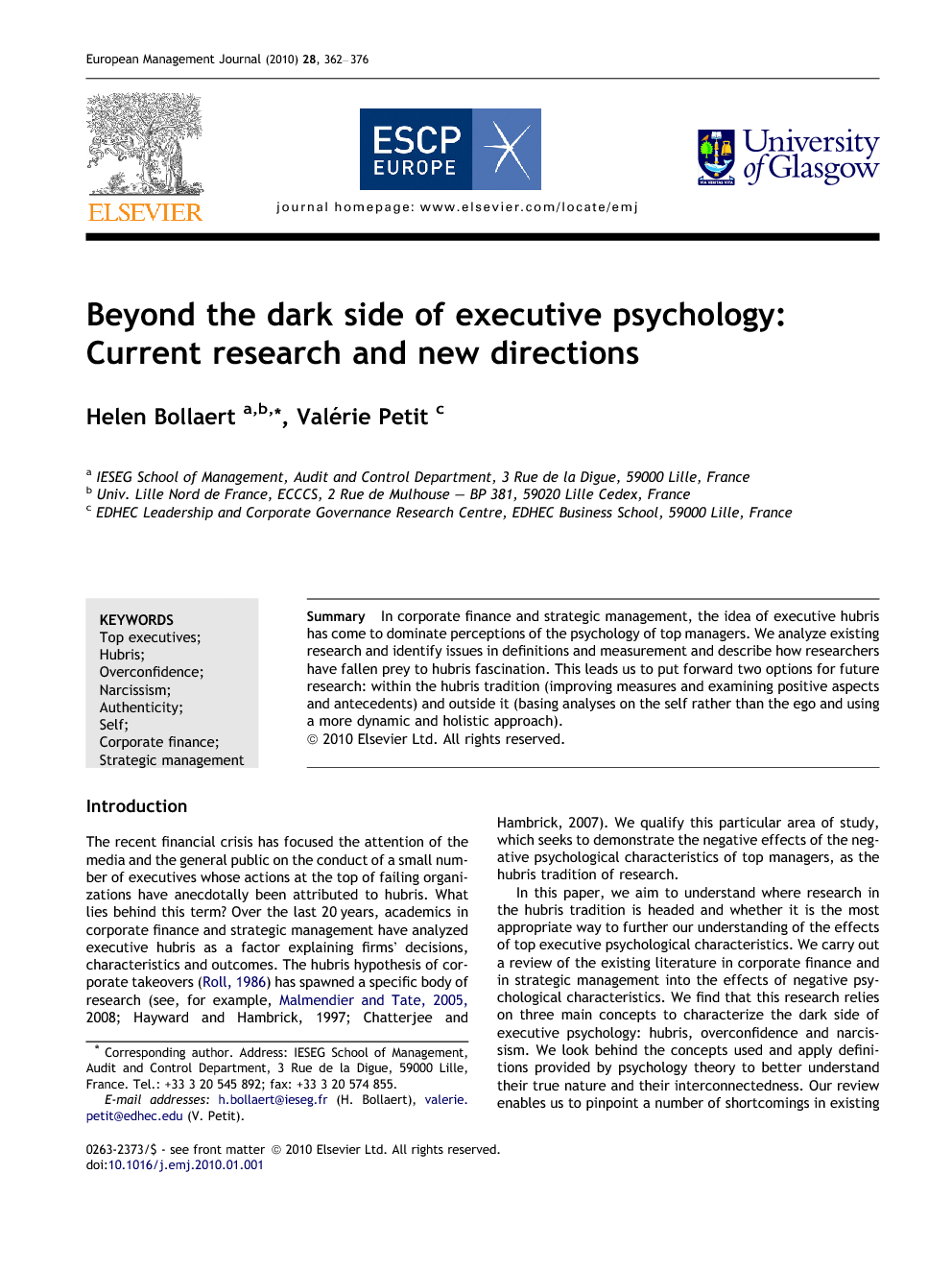 In corporate finance and strategic management, the idea of executive hubris has come to dominate perceptions of the psychology of top managers. We analyze existing research and identify issues in definitions and measurement and describe how researchers have fallen prey to hubris fascination. This leads us to put forward two options for future research: within the hubris tradition (improving measures and examining positive aspects and antecedents) and outside it (basing analyses on the self rather than the ego and using a more dynamic and holistic approach).

The recent financial crisis has focused the attention of the media and the general public on the conduct of a small number of executives whose actions at the top of failing organizations have anecdotally been attributed to hubris. What lies behind this term? Over the last 20 years, academics in corporate finance and strategic management have analyzed executive hubris as a factor explaining firms’ decisions, characteristics and outcomes. The hubris hypothesis of corporate takeovers (Roll, 1986) has spawned a specific body of research (see, for example, Malmendier and Tate, 2005, Malmendier and Tate, 2008, Hayward and Hambrick, 1997 and Chatterjee and Hambrick, 2007). We qualify this particular area of study, which seeks to demonstrate the negative effects of the negative psychological characteristics of top managers, as the hubris tradition of research. In this paper, we aim to understand where research in the hubris tradition is headed and whether it is the most appropriate way to further our understanding of the effects of top executive psychological characteristics. We carry out a review of the existing literature in corporate finance and in strategic management into the effects of negative psychological characteristics. We find that this research relies on three main concepts to characterize the dark side of executive psychology: hubris, overconfidence and narcissism. We look behind the concepts used and apply definitions provided by psychology theory to better understand their true nature and their interconnectedness. Our review enables us to pinpoint a number of shortcomings in existing research in the hubris tradition. Firstly, we demonstrate that the theoretical grounding of the concepts used is often weak. For example, the hubris concept relies on a mythical construction which prevents reliance on a genuine definition and definitions of overconfidence used are very general and do not consider more precise approaches developed in psychology theory. In addition, the links between hubris and related concepts are often poorly apprehended leading to problems of comparability. Secondly, we analyze the measures used to capture hubris, narcissism and overconfidence in existing research. We find that there is an overwhelming (although not exclusive) reliance on indirect measures whose link with the characteristic being studied is weak. Finally, we underline the danger of hubris fascination. Researchers are caught in a negative–negative paradigm in which they seek to identify pathological psychological characteristics in top executives and link them to poor performance effects or other disastrous consequences. We suggest that there is a need to recognize our reliance on the hubris myth and break the spell of hubris fascination to explore other aspects of executive psychology. Our analysis of existing research leads us to wonder whether research in the hubris tradition has had its day. We conclude that there is still potential for research within it, given the general interest in the question, provided that we remain aware of the limits of existing research and develop new approaches. We suggest ways to improve the quality of research through improved definitions and measurement and put forward ideas for new research questions within the hubris tradition. The positive aspects of the hubristic behaviors of top executives have received little attention from researchers. Drawing parallels with research into narcissism, we show that hubristic behaviors have some socially desirable aspects and can therefore lead to expectations of positive firm performance. A further neglected aspect is that of the antecedents of hubris. The hubris tradition to date has only considered the effects of a negative psychological characteristic captured at a precise moment in time. There is scope for research examining the contextual factors which cause or aggravate hubris. Remaining within the confines of the hubris tradition of research does not, however, do justice to the question of top executive psychology. We therefore put forward a paradigm shift to explore new approaches. Seeing executive psychology through the lens of the self, rather than the ego which is used in the hubris tradition, provides a more holistic view. Considering the individual executive from the point of view of the self also raises the question of how he/she becomes affected by ego pathologies. These result from a loss of contact with the true self and the fabrication of a false self and the development of a distorted sense of reality. The notion of true self leads us to analyze the link between authentic leadership and hubris – as an authentic leader continuously strives to develop and maintain his/her true self, we posit that he/she is unlikely to display marked hubristic tendencies. Authentic leadership development further suggests the importance of the dynamic aspects of executive psychology, such as actualization and individuation. There is scope for research into executive learning and self-development which would shed new light on the effect of executive psychological characteristics on an organization’s strategy and performance over the long term. In our conclusion, we summarize our main ideas in the form of a research agenda which offers a choice between continuity within the hubris tradition and a paradigm shift toward new approaches to executive psychology.

We feel that the analysis we have presented in this paper has changed our own perception of the nature and future of research into executive psychological characteristics. Neither of us has emerged unscathed from the experience. One of us has had to challenge previously-held certainties about the so-called rationality of economic actors and in particular the comfort of being able to believe that behavior which deviates from a prescribed norm is necessarily indicative of a pathological psychological condition in an executive. The other has discovered that one specific field of business research cannot claim to provide all the answers to a particular issue. In particular, the discovery of the hubris tradition has given new purpose to research on authentic leadership theory and has generated new ideas on the links between authenticity development and the prevention of hubris. Our personal journey through the different fields of research described in this paper has led us to agree on our analysis of the future of research into executive psychological characteristics. Research in the hubris tradition still offers scope for furthering our understanding of top executives and their impact on organizations, although it is moribund if it continues in the same negative–negative paradigm based on unsound theoretical approaches. But there is much more to executive psychology than is suggested by the hubris tradition. Studying top executives using more holistic frameworks, such as the self, and introducing dynamic aspects will open the door to a whole new understanding of executive psychology and its effects. We personally intend in future to avail ourselves of the opportunities which new vistas, both within and without the hubris tradition, have opened up.