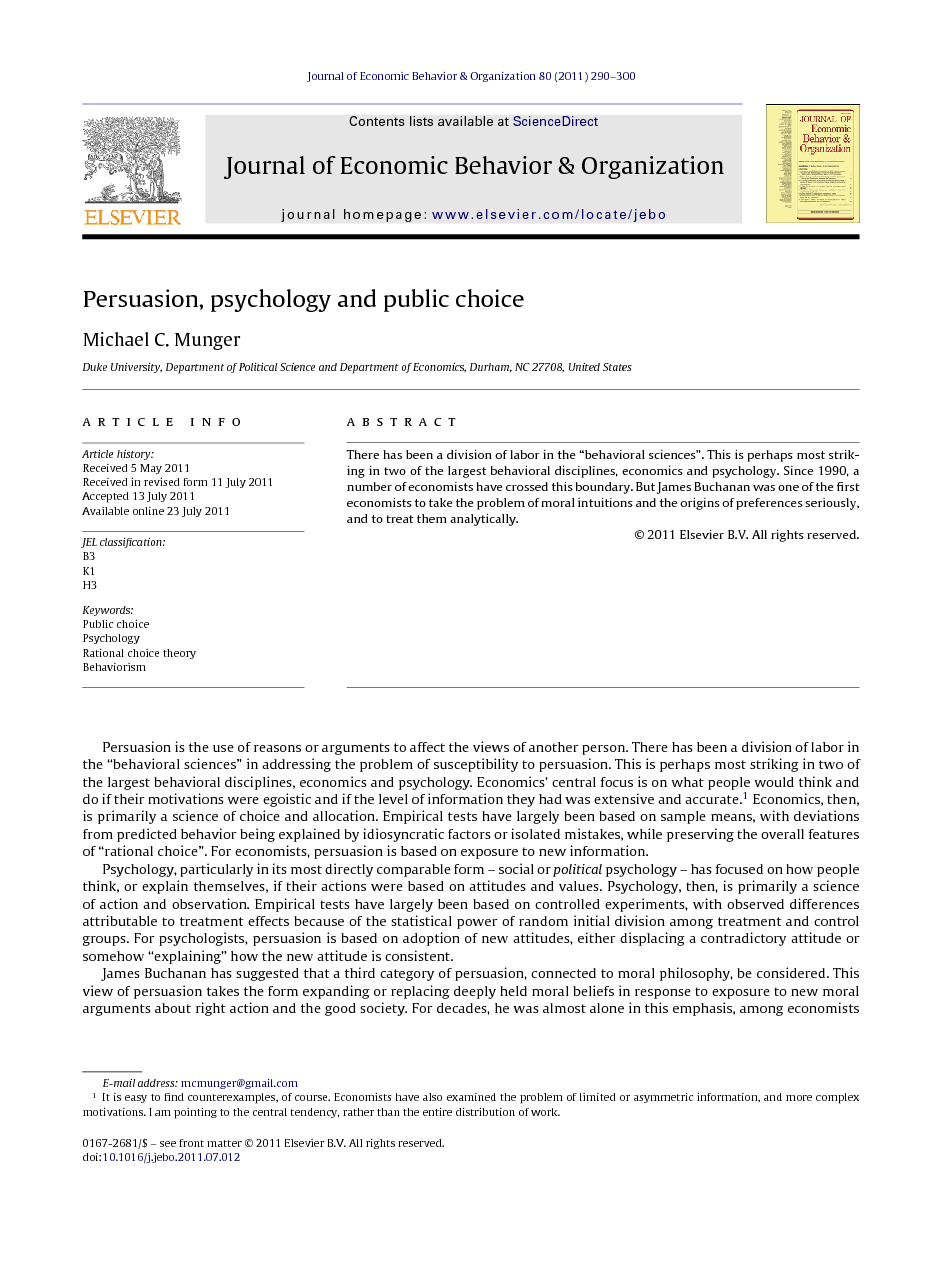 There has been a division of labor in the “behavioral sciences”. This is perhaps most striking in two of the largest behavioral disciplines, economics and psychology. Since 1990, a number of economists have crossed this boundary. But James Buchanan was one of the first economists to take the problem of moral intuitions and the origins of preferences seriously, and to treat them analytically.

Persuasion is the use of reasons or arguments to affect the views of another person. There has been a division of labor in the “behavioral sciences” in addressing the problem of susceptibility to persuasion. This is perhaps most striking in two of the largest behavioral disciplines, economics and psychology. Economics’ central focus is on what people would think and do if their motivations were egoistic and if the level of information they had was extensive and accurate.1 Economics, then, is primarily a science of choice and allocation. Empirical tests have largely been based on sample means, with deviations from predicted behavior being explained by idiosyncratic factors or isolated mistakes, while preserving the overall features of “rational choice”. For economists, persuasion is based on exposure to new information. Psychology, particularly in its most directly comparable form – social or political psychology – has focused on how people think, or explain themselves, if their actions were based on attitudes and values. Psychology, then, is primarily a science of action and observation. Empirical tests have largely been based on controlled experiments, with observed differences attributable to treatment effects because of the statistical power of random initial division among treatment and control groups. For psychologists, persuasion is based on adoption of new attitudes, either displacing a contradictory attitude or somehow “explaining” how the new attitude is consistent. James Buchanan has suggested that a third category of persuasion, connected to moral philosophy, be considered. This view of persuasion takes the form expanding or replacing deeply held moral beliefs in response to exposure to new moral arguments about right action and the good society. For decades, he was almost alone in this emphasis, among economists at least. In the last two decades, a number of other economists have considered the importance of moral intuitions, beliefs, and “mental models”.2 In this essay, I will lay out some of the implications of the psychological viewpoint, including some important recent work in behavioral economics that has taken up both that viewpoint and the empirical testing tool (classical experiments) used by psychologists. Some challenges that this work poses for economics, and public choice, will then be outlined. But then I will turn back to the claim presented above, that James Buchanan consistently made claims about the importance of a different kind of persuasion, one that is more fundamental than the behavioral claims have assailed to date, and one that more scholars should now turn to study.

Public Choice has the same dilemma. It is not simply a choice by the “public”, but rather the study of the myriad separate and perhaps contradictory choices made by individuals, in the context of some public rules or institutions. Robinson Crusoe had no need of a market, it is true, but neither had he use for a constitution. Groups need constitutions; societies need mechanisms for working out disagreements and fostering voluntary cooperation. The future of Public Choice grows directly from its past, and that is a past in which the contributions of James Buchanan are central. For in his work, as in that of no other single scholar, we see unified the two core themes of institutions as philosophical mechanisms for embodying ethical values and institutions as economic mechanisms for capturing the gains from exchange.