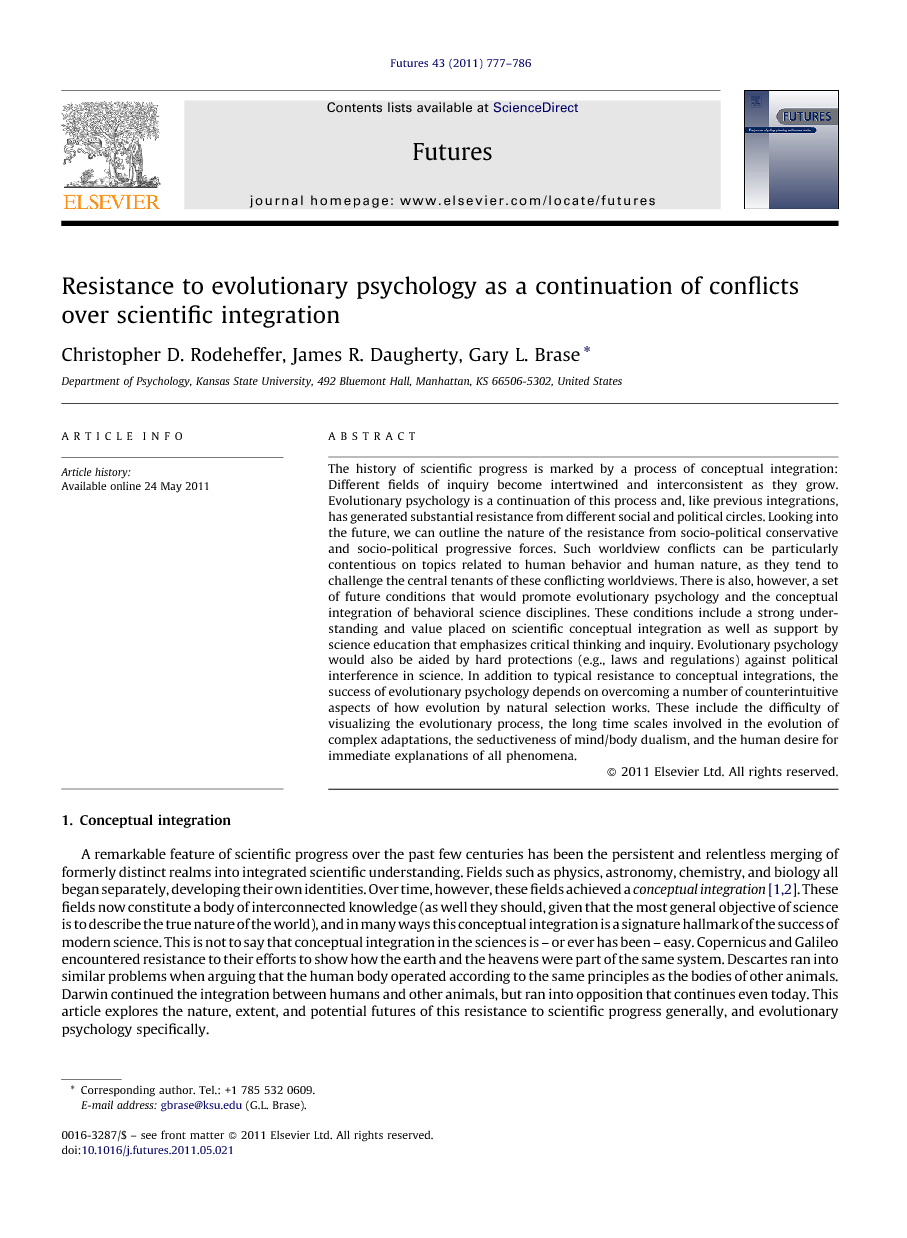 The history of scientific progress is marked by a process of conceptual integration: Different fields of inquiry become intertwined and interconsistent as they grow. Evolutionary psychology is a continuation of this process and, like previous integrations, has generated substantial resistance from different social and political circles. Looking into the future, we can outline the nature of the resistance from socio-political conservative and socio-political progressive forces. Such worldview conflicts can be particularly contentious on topics related to human behavior and human nature, as they tend to challenge the central tenants of these conflicting worldviews. There is also, however, a set of future conditions that would promote evolutionary psychology and the conceptual integration of behavioral science disciplines. These conditions include a strong understanding and value placed on scientific conceptual integration as well as support by science education that emphasizes critical thinking and inquiry. Evolutionary psychology would also be aided by hard protections (e.g., laws and regulations) against political interference in science. In addition to typical resistance to conceptual integrations, the success of evolutionary psychology depends on overcoming a number of counterintuitive aspects of how evolution by natural selection works. These include the difficulty of visualizing the evolutionary process, the long time scales involved in the evolution of complex adaptations, the seductiveness of mind/body dualism, and the human desire for immediate explanations of all phenomena.

A remarkable feature of scientific progress over the past few centuries has been the persistent and relentless merging of formerly distinct realms into integrated scientific understanding. Fields such as physics, astronomy, chemistry, and biology all began separately, developing their own identities. Over time, however, these fields achieved a conceptual integration [1] and [2]. These fields now constitute a body of interconnected knowledge (as well they should, given that the most general objective of science is to describe the true nature of the world), and in many ways this conceptual integration is a signature hallmark of the success of modern science. This is not to say that conceptual integration in the sciences is – or ever has been – easy. Copernicus and Galileo encountered resistance to their efforts to show how the earth and the heavens were part of the same system. Descartes ran into similar problems when arguing that the human body operated according to the same principles as the bodies of other animals. Darwin continued the integration between humans and other animals, but ran into opposition that continues even today. This article explores the nature, extent, and potential futures of this resistance to scientific progress generally, and evolutionary psychology specifically. There has always been resistance to certain scientific advances. Quite often the process of conceptual integration results in some ideas becoming completely untenable (for example the idea of a flat earth, an earth-centric universe, phlogiston theory, and the notion of an élan vital); the integration simply makes it too obvious that these ideas do not fit with existing scientific truths. The problem, in terms of the advancement of science, is that these erroneous ideas are not disconnected from the real world of people and institutions – sometimes powerful, pervasive, and persuasive people and institutions, and their ideas can often be intuitively appealing. Therein lies much of the difficulty for science: separating the good versus the bad ideas. As Carl Sagan once noted, “the fact that some geniuses were laughed at does not imply that all who are laughed at are geniuses. They laughed at Columbus, they laughed at Fulton, they laughed at the Wright brothers. But they also laughed at Bozo the Clown” [3, p. 64]. Conceptual integration, although not an easy road to travel, is the answer for the social sciences. Within the social sciences, many different disciplines exist (e.g., anthropology, communication studies, economics, history, human geography, political science, psychology, and sociology), with many of those divisions further broken into subfields. In psychology, for example, there is social psychology, cognitive psychology, developmental psychology, industrial/organizational psychology, neuropsychology, health psychology, positive psychology, and so on. These divisions have stemmed the rate of scientific progress within the social sciences and have resulted in disparate lines of research that converge rather poorly. What is needed then, is a conceptual integration within the social sciences, much like we have seen with the natural (including medical) sciences. E.O. Wilson [4] compared the productivity of the medical sciences to that of the social sciences, and noted that the productivity of the social sciences is relatively slow and halting. This observation of the social sciences lends support to Kuhn's [5] conclusion that the social sciences are still in the “prescience” stage and conceptual integration could lead to a unifying paradigm. In simple terms, what conceptual integration means is that a theory proposed by any one area of the social sciences should hold up in another social science domain. For example, a theory originating in psychology should hold up when evaluated in the light of what is known in anthropology (and in economics, and in sociology, etc.). Tensions or disagreements between fields should suggest a flaw in theory for one or both fields and should encourage all involved parties to work towards a remedy. This process is already occurring in the medical sciences; a new theory about a particular disease must run the gauntlet of being consistent with what is known in biology, chemistry, anatomy, genetics, endocrinology, and so forth. If a theory fails this test of consistency then it is generally discarded. The difficult process of conceptual integration in the social sciences can be achieved through the application of evolutionary theory, as it can serve as an underling framework into which different ways and levels of investigating human thought and behavior can be integrated. Its application would produce theories that are both parsimonious and ecologically valid. Theories on human reasoning are one example of how the application of evolutionary principles has benefited psychology [6] and [7]. By considering the types of specific situations in which humans recurrently have had to make inferences (e.g., social exchanges [7] and [8] and hazard avoidance [9] and [10]), researchers have produced theories that are both parsimonious and ecologically valid in comparison to theories that have tried to explain human reasoning faculties in a general, formal-logical sense (e.g., mental models theory [11] and [12] and natural deduction theory [13] and [14]). Unfortunately, the theory of evolution by natural selection has always been steeped in resistance because it runs up against some intuitively appealing ideas that are promoted by powerful and entrenched advocates such as resolute social conservatives and social progressives. Evolutionary theory, for its part, also entails some not-so-intuitive ideas (see the last section in this paper). The additional step of applying evolutionary theory to human behavior sharpens this conflict. Evolutionary psychology hits upon the still sensitive junctions between humans and other animals, between the physical and the mental, between the secular and the divine. In short, the integration versus the persistence of intellectual divisions – within science and within the larger society – will be an important factor in the growth and acceptance of evolutionary psychology versus its stagnation and rejection.

One way to conceptualize religious, political, and scientific worldviews is simply that they are each internally coherent bodies of explanations for phenomena. These worldviews are sometimes relatively accurate and sometimes wildly inaccurate. Periodically, these views come into conflict with one another as they may propose contradicting or mutually exclusive explanations for the same phenomenon. For example, there are religious worldviews that assert the age of the Earth is a few thousand years, whereas there are scientific worldviews that assert the age of the Earth is billions of years. Another example is the question of when life begins (e.g., conception, 25 weeks of gestation, or birth). These worldview conflicts often center on specific topics or phenomena – particular skirmishes, one might say, of a much larger battle to dominate the explanation of our world. From a broad perspective, however, these conflicting worldviews lead to political debates, religious wars, culture wars, and scientific research. Scientific progress and conceptual integrations within science tend to create these conflicts because they often bring science into conflict with other worldviews. Science does not have any guarantee of winning these conflicts by brute force or mass numbers, nor does it necessarily have more influence on public thought and policy than non-scientific worldviews. Science, however, has been successful more often than not simply because the principles of the scientific method tend to yield more accurate worldviews [4]. Specifically, scientific theories that are testable, falsifiable, and withstand empirical evaluations are maintained. Theories not meeting these criteria are replaced or discarded. This process of accumulating scientific knowledge is auto-corrective; theories guide research until they are replaced with newer theories that better explain existing and new knowledge. Using this method, science has been able to change and adapt when confronted with new ideas and information. This is a marked advantage of science and – incidentally – is a process that closely parallels that of biological natural selection. None of the foregoing discussion suggests that people cannot be religious, or conservative, or progressive, or humanistic, or that people cannot have different opinions on any particular issue. But opinions are not the same as truth. To illustrate, consider the gambit (utilized by both conservatives and progressives) of claiming that there should be “freedom to believe what one wants.” This is fine within the realm of personal tastes (e.g., believing that blue is the best color, that Aerosmith is a great band, and chocolate is delicious). On issues of science, however, there is not a freedom to believe whatever one wants. Rather, the process of scientific research is one of defining progressively narrower bands of latitude for belief, with the ultimate goal being zero degrees of latitude as science reaches true and complete descriptions of phenomena. (We are ignoring here the positions of postmodernism and extreme cultural relativism, as their basic premises are inherently antithetical to science as it is generally understood [78].) Where does this leave evolutionary psychology? Science has fared well against supernatural worldviews in conflicts dealing with phenomena in physics, chemistry, and astronomy. But worldview conflicts relating to human behavior and human nature can be particularly contentious; they tend to invoke multiple conflicting worldviews because human nature and behavior are usually central topics in belief systems. Not surprisingly, it has been found that religious fundamentalism (a rigid worldview) is a greater predictor than factors such as education and political conservativism, in predicting disbelief in the theory of evolution [79]. There are few remaining degrees of latitude for debates on the validity of the theory of evolution by natural selection, that humans are an evolved animal species, and the corresponding implications of these facts. The future of evolutionary psychology will include many worldview conflicts and more than a fair share of controversy. Given a legitimate and open competition between worldviews, however, evolutionary psychology will supersede other views simply because it is part of the continued conceptual integration of the sciences and it is more accurate in describing the world (poetically, a Darwinian-like process; [80] and [81]). Perhaps the ultimate irony is that, as some have pointed out [2] and [82], the complete success of evolutionary ideas in permeating all aspects of psychology will effectively mark the end of a distinct “evolutionary psychology” in contrast with the rest of psychology.