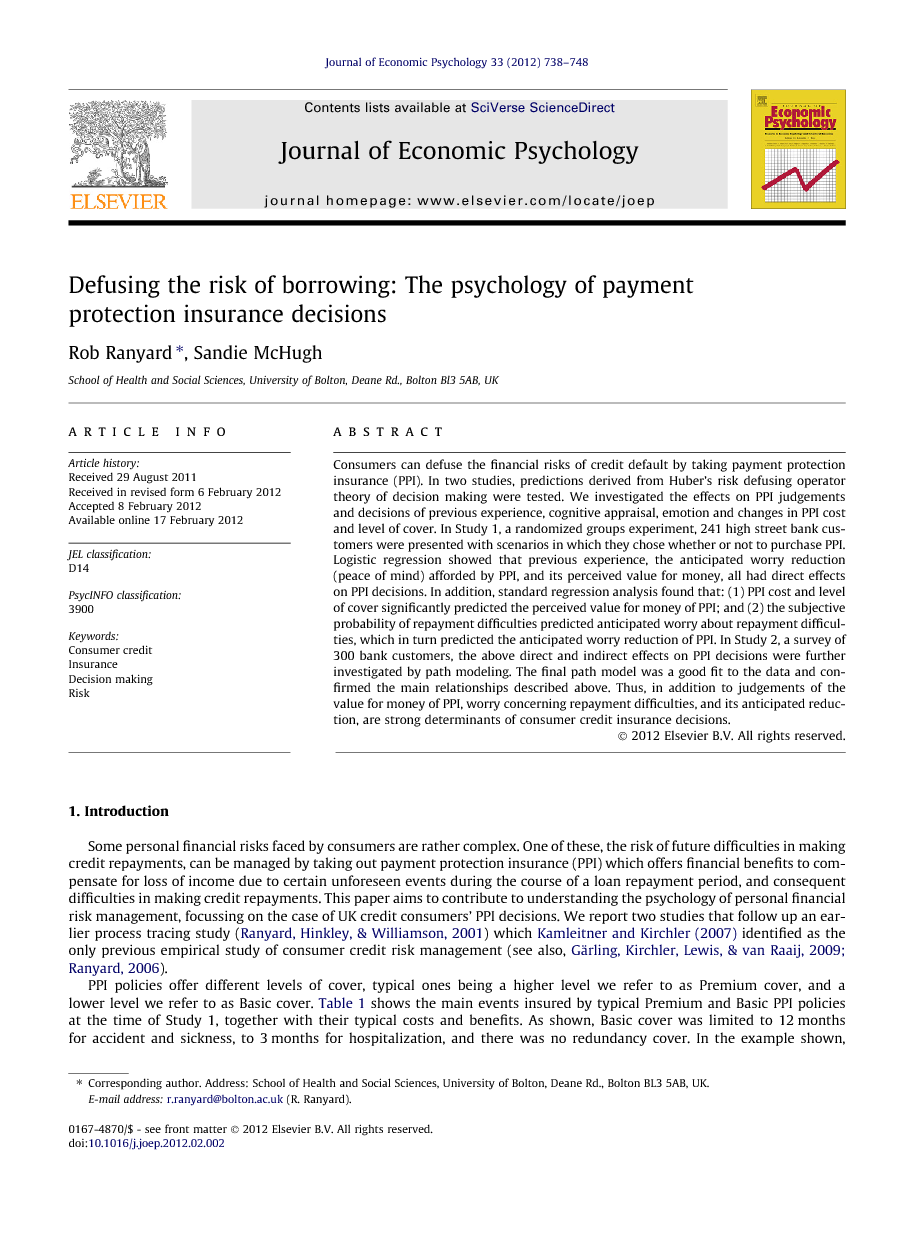 Consumers can defuse the financial risks of credit default by taking payment protection insurance (PPI). In two studies, predictions derived from Huber’s risk defusing operator theory of decision making were tested. We investigated the effects on PPI judgements and decisions of previous experience, cognitive appraisal, emotion and changes in PPI cost and level of cover. In Study 1, a randomized groups experiment, 241 high street bank customers were presented with scenarios in which they chose whether or not to purchase PPI. Logistic regression showed that previous experience, the anticipated worry reduction (peace of mind) afforded by PPI, and its perceived value for money, all had direct effects on PPI decisions. In addition, standard regression analysis found that: (1) PPI cost and level of cover significantly predicted the perceived value for money of PPI; and (2) the subjective probability of repayment difficulties predicted anticipated worry about repayment difficulties, which in turn predicted the anticipated worry reduction of PPI. In Study 2, a survey of 300 bank customers, the above direct and indirect effects on PPI decisions were further investigated by path modeling. The final path model was a good fit to the data and confirmed the main relationships described above. Thus, in addition to judgements of the value for money of PPI, worry concerning repayment difficulties, and its anticipated reduction, are strong determinants of consumer credit insurance decisions.

Some personal financial risks faced by consumers are rather complex. One of these, the risk of future difficulties in making credit repayments, can be managed by taking out payment protection insurance (PPI) which offers financial benefits to compensate for loss of income due to certain unforeseen events during the course of a loan repayment period, and consequent difficulties in making credit repayments. This paper aims to contribute to understanding the psychology of personal financial risk management, focussing on the case of UK credit consumers’ PPI decisions. We report two studies that follow up an earlier process tracing study (Ranyard, Hinkley, & Williamson, 2001) which Kamleitner and Kirchler (2007) identified as the only previous empirical study of consumer credit risk management (see also, Gärling et al., 2009 and Ranyard, 2006). PPI policies offer different levels of cover, typical ones being a higher level we refer to as Premium cover, and a lower level we refer to as Basic cover. Table 1 shows the main events insured by typical Premium and Basic PPI policies at the time of Study 1, together with their typical costs and benefits. As shown, Basic cover was limited to 12 months for accident and sickness, to 3 months for hospitalization, and there was no redundancy cover. In the example shown, the Premium PPI policy cost an additional 14% of monthly repayments and the Basic an additional 7%. It should be noted that one of the main complaints of UK consumer advisors recently has been that the costs of both levels of cover are very high relative to the financial benefits that can be received (Ashton and Hudson, 2009, Office of Fair Trading, 2005, Office of Fair Trading, 2006a and Office of Fair Trading, 2006b). One of the aims of the first study is to examine the influence on PPI decisions of changes in PPI cost and level of cover relative to the effects of other key psychological variables described below. The main aim of the two studies reported here, however, is to test predictions of direct and indirect effects on PPI decisions of cognitive appraisal, emotion and previous experience. These predictions, presented in the next section, are derived from Huber, 1997, Huber, 2007 and Huber, 2012 risk defusing operator (RDO) theory of decision making with the addition of emotion-based variables.

The main aim of Study 1 was to investigate the effects on PPI decisions of previous experience, emotion and aspects of cognitive appraisal factors related to Huber, 1997, Huber, 2007 and Huber, 2012 model of consumer risk management (hypotheses 1 and 2). In addition, the effects on PPI decisions of the variations in PPI cost and level of cover were investigated (hypotheses 3 and 4). The findings with respect to hypotheses 3 and 4 are discussed in the final section. With respect to hypothesis 1, it was found in the first main analysis that previous experience of purchasing PPI, judgements of its perceived value for money and the extent to which it was anticipated that PPI would reduce worry about repayment difficulties all had relatively strong direct effects in the predicted directions. In addition to these direct effects, there were several significant indirect effects, as shown in Fig. 1b. First, although the subjective probability of repayment difficulties did not have a direct effect on PPI decisions, it had an indirect effect via worry about such difficulties. Thus, although the perception of a risk may be necessary for a pre-event RDO such as PPI to be adopted, its effect may be mediated by worry about it. Second, in addition to its direct effect, previous experience of PPI had a significant indirect effect, also via worry. This suggests that risk management decisions may be related to intuitive, experiential rather than purely analytic modes of thought (Slovic et al., 2004). Third, although worry about repayment difficulties did not have a direct effect on decisions to take PPI, it had a strong indirect effect via the worry reduction anticipated from taking PPI. This suggests that with respect to the negative emotional consequences of a risky decision, pre-event RDOs such as PPI serve as a means to control or prevent such outcomes. Finally, as predicted, the peace of mind afforded by PPI had both a direct and an indirect effect via the value for money of PPI, suggesting that evaluations of RDOs are based on both cognitive appraisal and emotional concerns. These findings were further investigated in Study 2.