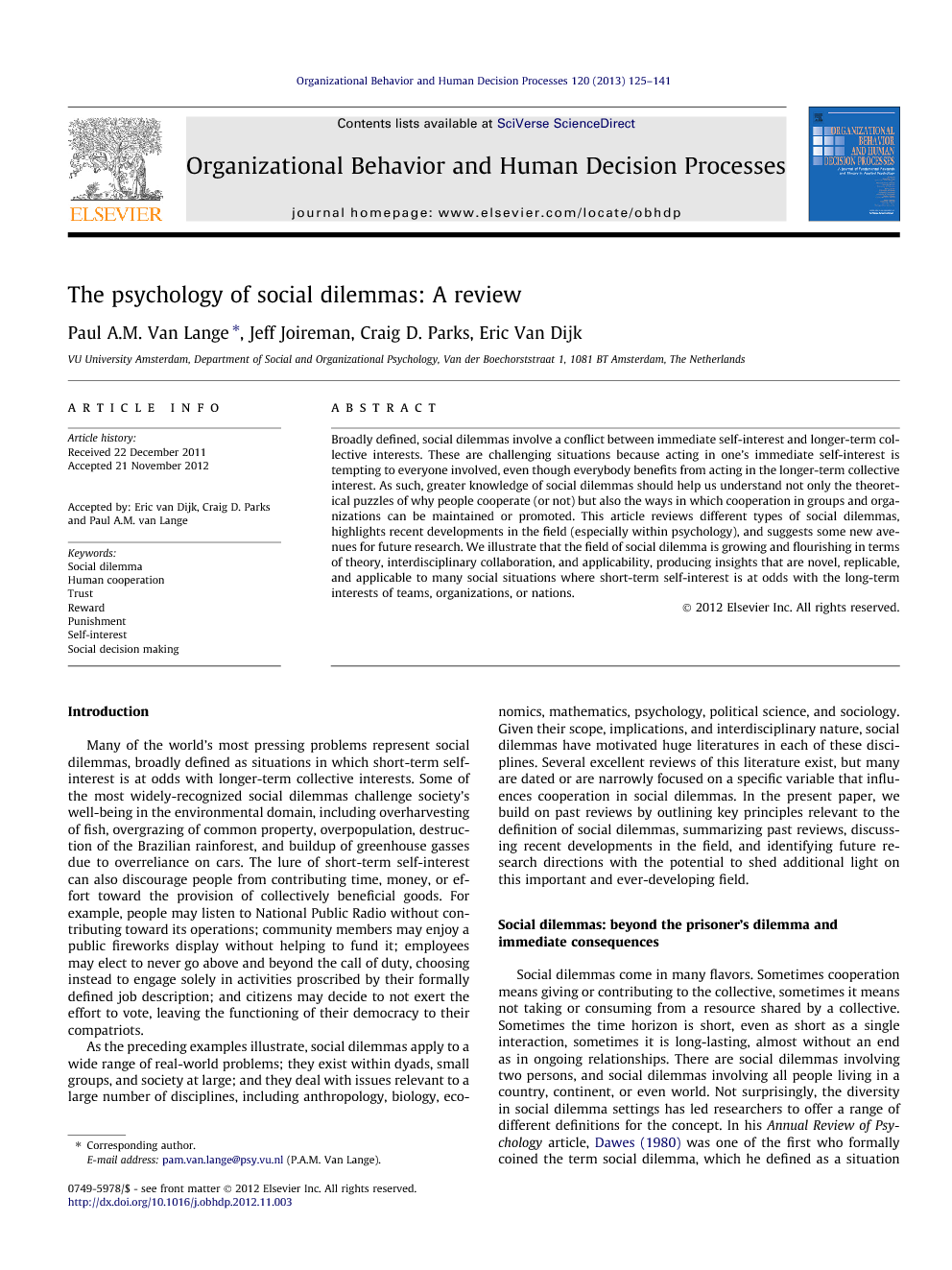 Broadly defined, social dilemmas involve a conflict between immediate self-interest and longer-term collective interests. These are challenging situations because acting in one’s immediate self-interest is tempting to everyone involved, even though everybody benefits from acting in the longer-term collective interest. As such, greater knowledge of social dilemmas should help us understand not only the theoretical puzzles of why people cooperate (or not) but also the ways in which cooperation in groups and organizations can be maintained or promoted. This article reviews different types of social dilemmas, highlights recent developments in the field (especially within psychology), and suggests some new avenues for future research. We illustrate that the field of social dilemma is growing and flourishing in terms of theory, interdisciplinary collaboration, and applicability, producing insights that are novel, replicable, and applicable to many social situations where short-term self-interest is at odds with the long-term interests of teams, organizations, or nations.

Many of the world’s most pressing problems represent social dilemmas, broadly defined as situations in which short-term self-interest is at odds with longer-term collective interests. Some of the most widely-recognized social dilemmas challenge society’s well-being in the environmental domain, including overharvesting of fish, overgrazing of common property, overpopulation, destruction of the Brazilian rainforest, and buildup of greenhouse gasses due to overreliance on cars. The lure of short-term self-interest can also discourage people from contributing time, money, or effort toward the provision of collectively beneficial goods. For example, people may listen to National Public Radio without contributing toward its operations; community members may enjoy a public fireworks display without helping to fund it; employees may elect to never go above and beyond the call of duty, choosing instead to engage solely in activities proscribed by their formally defined job description; and citizens may decide to not exert the effort to vote, leaving the functioning of their democracy to their compatriots. As the preceding examples illustrate, social dilemmas apply to a wide range of real-world problems; they exist within dyads, small groups, and society at large; and they deal with issues relevant to a large number of disciplines, including anthropology, biology, economics, mathematics, psychology, political science, and sociology. Given their scope, implications, and interdisciplinary nature, social dilemmas have motivated huge literatures in each of these disciplines. Several excellent reviews of this literature exist, but many are dated or are narrowly focused on a specific variable that influences cooperation in social dilemmas. In the present paper, we build on past reviews by outlining key principles relevant to the definition of social dilemmas, summarizing past reviews, discussing recent developments in the field, and identifying future research directions with the potential to shed additional light on this important and ever-developing field.