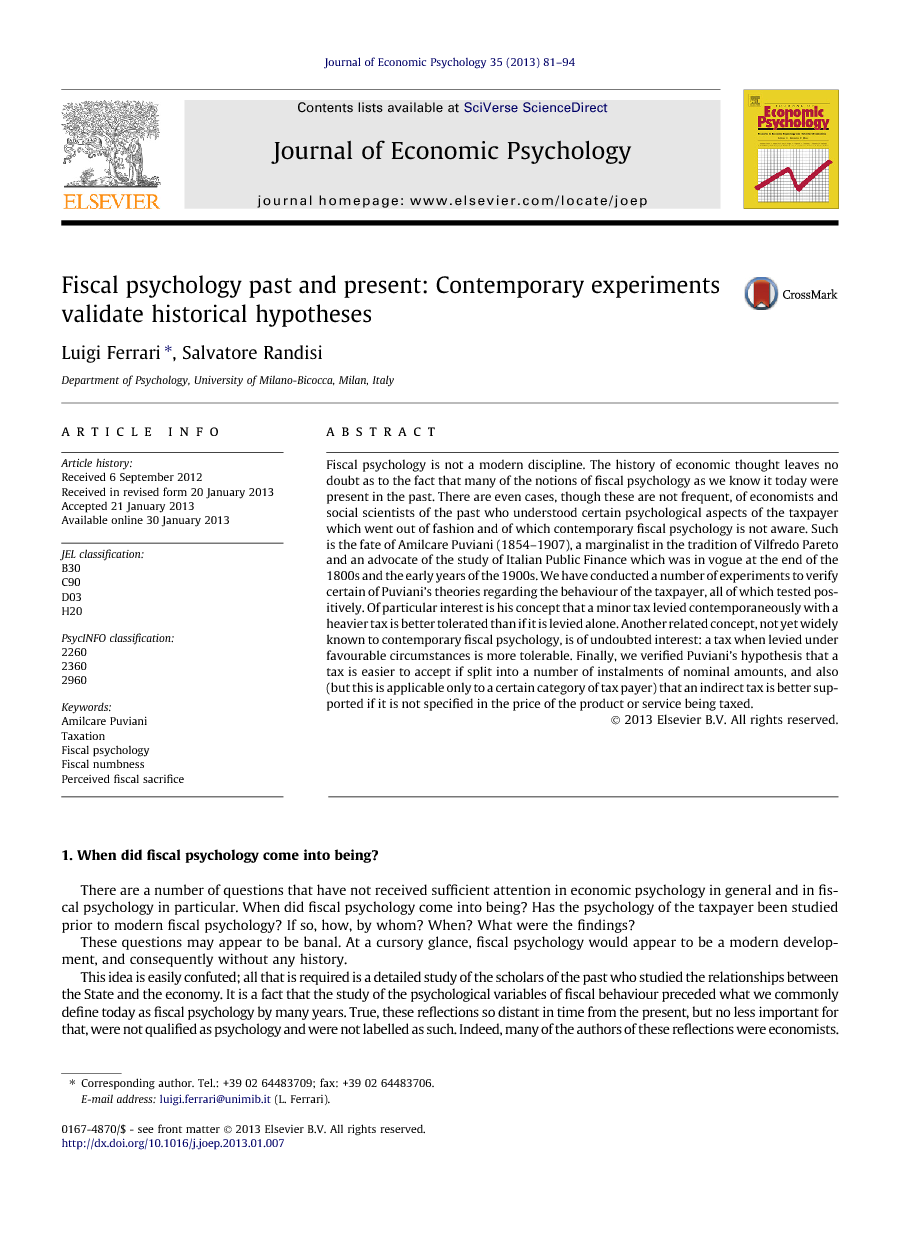 Fiscal psychology is not a modern discipline. The history of economic thought leaves no doubt as to the fact that many of the notions of fiscal psychology as we know it today were present in the past. There are even cases, though these are not frequent, of economists and social scientists of the past who understood certain psychological aspects of the taxpayer which went out of fashion and of which contemporary fiscal psychology is not aware. Such is the fate of Amilcare Puviani (1854–1907), a marginalist in the tradition of Vilfredo Pareto and an advocate of the study of Italian Public Finance which was in vogue at the end of the 1800s and the early years of the 1900s. We have conducted a number of experiments to verify certain of Puviani’s theories regarding the behaviour of the taxpayer, all of which tested positively. Of particular interest is his concept that a minor tax levied contemporaneously with a heavier tax is better tolerated than if it is levied alone. Another related concept, not yet widely known to contemporary fiscal psychology, is of undoubted interest: a tax when levied under favourable circumstances is more tolerable. Finally, we verified Puviani’s hypothesis that a tax is easier to accept if split into a number of instalments of nominal amounts, and also (but this is applicable only to a certain category of tax payer) that an indirect tax is better supported if it is not specified in the price of the product or service being taxed.

There are a number of questions that have not received sufficient attention in economic psychology in general and in fiscal psychology in particular. When did fiscal psychology come into being? Has the psychology of the taxpayer been studied prior to modern fiscal psychology? If so, how, by whom? When? What were the findings? These questions may appear to be banal. At a cursory glance, fiscal psychology would appear to be a modern development, and consequently without any history. This idea is easily confuted; all that is required is a detailed study of the scholars of the past who studied the relationships between the State and the economy. It is a fact that the study of the psychological variables of fiscal behaviour preceded what we commonly define today as fiscal psychology by many years. True, these reflections so distant in time from the present, but no less important for that, were not qualified as psychology and were not labelled as such. Indeed, many of the authors of these reflections were economists. Take Smith, for example, and his “An Inquiry into the Nature and Causes of the Wealth of Nations” (1776); the Scottish economist dedicated Chapter III of the fifth book of this great work to taxation. He made specific and extensive reference to the taxation of luxury items and laid great importance on the lack of fiscal awareness in the various social classes. A few years later, Ricardo wrote along much the same lines in “On the Principles of Political Economy and taxation” (1817), remarking on the confusion which reigned in the mind of the taxpayer and the fact that governments certainly did not disdain exploiting these cognitive limitations regarding fiscal issues. In the middle of the 1800s another important economist, Mill (1848, “Principles of Political Economy”, p. 174), was to take up Ricardo’s concepts and develop them further. He concentrated his studies on the reaction of the taxpayer to the various types of taxes and observed that, under the same tax burden outlay and consumption may decrease or even increase with the application of a new tax. The first case usually occurs when a new tax is levied on wealth or consumption (for example on real estate or on alcohol), while an increase in spending may occur when an inheritance tax is applied. He took a very modern approach to the psychological problem of the greater acceptance of indirect taxes (where the tax burden is ‘concealed’ in the price of the taxed item); he explained that his compatriots could support heavy taxation as long as they were not obliged ‘to look the taxman in the eye’, as this leads to a clear and typical perception of the direct tax. Cournot, 1863 and Cournot, 1877 also took up the subject of how the taxpayer supports the tax burden and his acceptance of governments imposing taxes. This economist, rightly considered a classic pillar of economic thought, was convinced that real fiscal growth has a secular trend. In his view the taxpayer is accustomed to a certain tax burden, and to a degree this numbs him to the distress, but, Cournot warns, this state of mind needs time to consolidate. Cournot lived and wrote at the time of the marginalist revolution of economic thought. Marginalism had a tormented relationship with psychology; in the early days, the economists of the neoclassic/marginalist paradigm considered psychology a resource to explain economic behaviour. However in the years 1934–1939 Hicks and Allen, 1934a and Hicks and Allen, 1934b and Hicks (1939) reversed this, with a rigid rejection of psychology. Those were the years in which the premises were created for the paradigm of the rational taxpayer, a paradigm that blocked most of the economic thought on the social–psychological component of fiscal behaviour. It was only in the years after World War II, after the studies conducted by Katona and the developments in the field of psychological science that the psychology of the taxpayer came back into vogue. This was the period during which fiscal psychology as we know it today came into being. Summing up, there can be no question that the history of economic thought has made significant contributions to the study of fiscal psychology. However, there is still an important question to be answered: are there still concepts of interest and novelty to be found in these contributions, or even concepts of importance for modern fiscal psychology? This is not an easy question to answer. An accurate and in-depth study of historical thought is necessary in order to fully comprehend the real reach of these reflections. At a first glance, it would seem that the major part of the results of these contributions has been integrated into modern fiscal psychology; for example, the difference in perception and toleration of direct and indirect taxes which intrigued economists in the past, has been carefully analysed by modern fiscal psychology. It can in fact be said that significant progress in methodology has been made in most of the fiscal subjects dealt with, particularly from an empirical point of view. It follows that very often the interest for psychological studies of taxation before fiscal psychology is purely historical in nature, with regard both to the study of thought and to the indirect study of past forms of taxation and the reconstruction of the history of the reactions of the taxpayer. There is however at least one very important exception.

Contemporary fiscal psychology must take into consideration the wealth of observations and reflections to be found in the history of economic and political thought and, in general terms, widen its horizons to extend beyond the purely psychological (Cullis and Lewis, 1985 and Kirchler, 2007 and Lewis, 1982 who cite Schmölders, 1959). Complex theoretical processes and simple empirical observations of the past, as in the case of Puviani, can both provide stimuli for systematic research that will swell and enrich our knowledge. According to Puviani, several general psychological principles can be applied to issues regarding taxation; he asserted that the perception of fiscal sacrifice when paying a tax could be diminished by inducing a state of numbness, by splitting the tax into instalments, by playing on the ignorance of the taxpayer or his underestimation of the tax and in certain circumstances, by exploiting a state of well-being of the taxpayer. In this study we have assessed these principles – principles that Puviani described, but did not verify empirically – through experimentation. In general, the results of the experiments conducted on these hypotheses confirm the validity of all his intuitions on the theory of fiscal illusion and consequently the importance of the issues raised by this scholar. H1. When living in a state of wellbeing, people tend to be aware of events that cause even the slightest distress; on the other hand, when living in a state of general discomfort people hardly notice stimuli that cause a minimum of additional distress. We compared the sacrifice perceived for the payment of a supplemental local tax associated with the principal tax (i.e., income tax) with that generated by a single payment of a tax of the same amount, taken in isolation from the payment of other taxes. The results show that there is a significant difference between these two levels of perceived sacrifice, thus confirming Puviani’s hypothesis of numbness. H2. In this case we were able to confirm that the perception of the fiscal sacrifice decreases if there is the possibility of paying the tax by instalments; moreover, the perception of sacrifice was much less when the final instalment was being paid, as opposed to the payment of the first. According to Puviani this is due to a transformation of the perception of the tax from an extraordinary event into a routine occurrence. He explained the dynamics which determine the reduction of the perception of sacrifice by pointing out that the perceived burden of the single payment is greater than the overall effect of the individual instalments. Moreover, the decrease in the “affliction of the tax” also depends on the degree of ‘resistance’ that the payment of the first instalments may generate, which over time however mutates into a feeling of ‘impotency’. The analysis of the individual items of the PFS scale shows that this feeling of impotence is particularly high compared to the other items and its score is always high even under conditions in which the PFS index itself decreases. In other words, the initial perception of the fiscal sacrifice is determined by a feeling of protest which over time is revealed as ineffective, thus giving way to a feeling of impotence, thus confirming Puviani’s hypothesis. H3. The results of the third scenario revealed a rather more complex situation, due to the decisive role played by the age of the participants. The version in which the price of a television was given, stating that VAT was included without however specifying the actual amount of the tax, generated practically the same level of perceived fiscal sacrifice as the condition in which the amount of VAT was openly indicated. However when the sample was divided into two groups on the basis of age, dividing the very young from the less young (cut off age = 40), the difference in the level of perceived fiscal sacrifice emerged only in the younger group, amongst whom the statement of the amount of VAT payable gave rise to an increase in the level of perceived sacrifice, and in particular generated additional feelings of anger. This result, which partially confirms the research hypothesis, still requires further investigation. H4. Finally, the hypothesis that the perception of fiscal sacrifice would diminish when associated with a state of well-being was confirmed by the experiment which simulated the gift of a taxable asset. A closing comment regarding our PFS scale; it proved to be reliable and easy to use, as it is both short and easily comprehensible in the complex subject of taxation. It provides a tool not only for measuring a synthetic index, but also other useful details in qualitative research such as, for example, the most common feelings evoked by taxation, i.e., distaste and dismay, which emerged as being particularly representative in the perception of fiscal sacrifice.