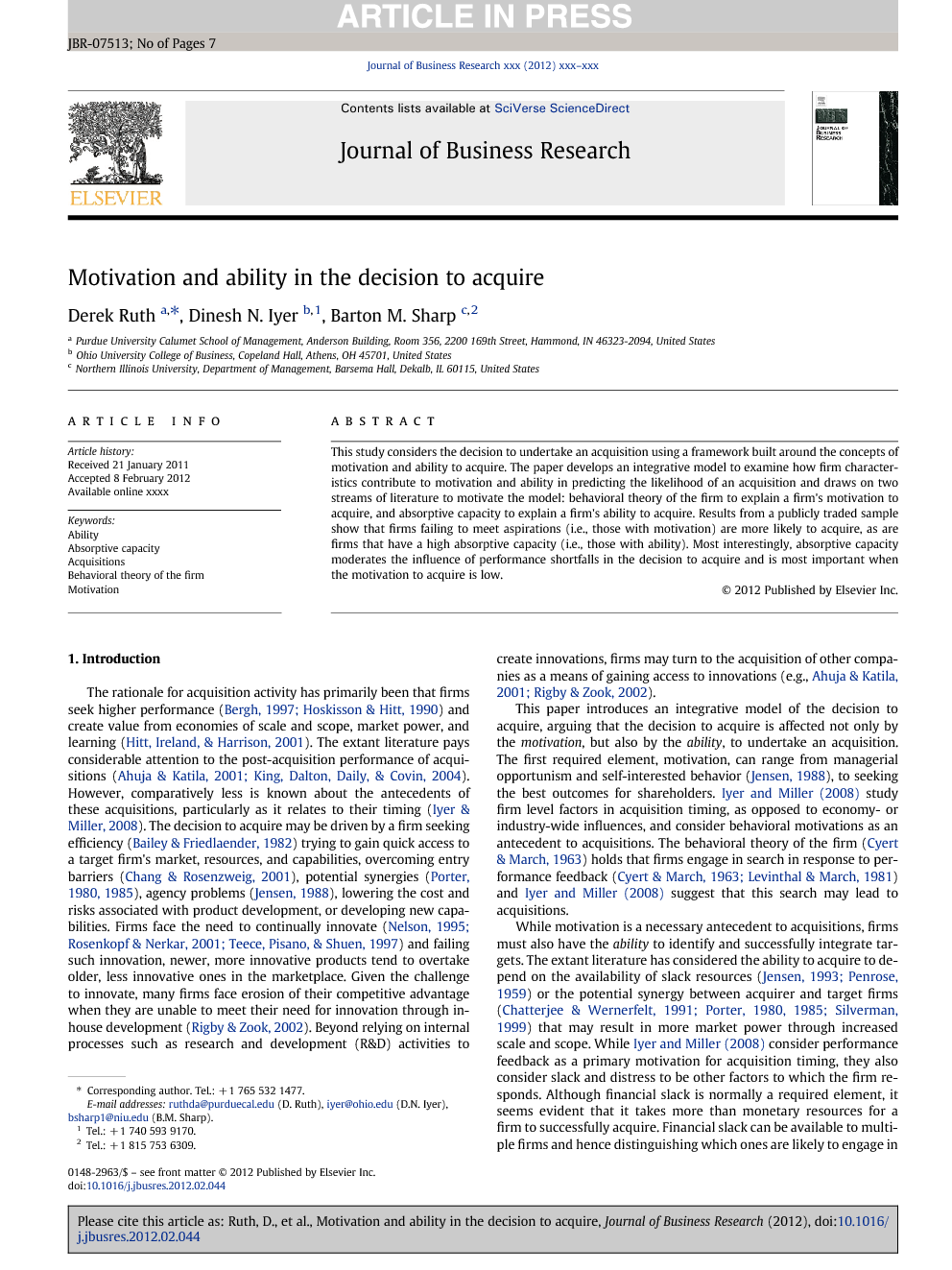 This study considers the decision to undertake an acquisition using a framework built around the concepts of motivation and ability to acquire. The paper develops an integrative model to examine how firm characteristics contribute to motivation and ability in predicting the likelihood of an acquisition and draws on two streams of literature to motivate the model: behavioral theory of the firm to explain a firm's motivation to acquire, and absorptive capacity to explain a firm's ability to acquire. Results from a publicly traded sample show that firms failing to meet aspirations (i.e., those with motivation) are more likely to acquire, as are firms that have a high absorptive capacity (i.e., those with ability). Most interestingly, absorptive capacity moderates the influence of performance shortfalls in the decision to acquire and is most important when the motivation to acquire is low.

The rationale for acquisition activity has primarily been that firms seek higher performance (Bergh, 1997 and Hoskisson and Hitt, 1990) and create value from economies of scale and scope, market power, and learning (Hitt, Ireland, & Harrison, 2001). The extant literature pays considerable attention to the post-acquisition performance of acquisitions (Ahuja and Katila, 2001 and King et al., 2004). However, comparatively less is known about the antecedents of these acquisitions, particularly as it relates to their timing (Iyer & Miller, 2008). The decision to acquire may be driven by a firm seeking efficiency (Bailey & Friedlaender, 1982) trying to gain quick access to a target firm's market, resources, and capabilities, overcoming entry barriers (Chang & Rosenzweig, 2001), potential synergies (Porter, 1980 and Porter, 1985), agency problems (Jensen, 1988), lowering the cost and risks associated with product development, or developing new capabilities. Firms face the need to continually innovate (Nelson, 1995, Rosenkopf and Nerkar, 2001 and Teece et al., 1997) and failing such innovation, newer, more innovative products tend to overtake older, less innovative ones in the marketplace. Given the challenge to innovate, many firms face erosion of their competitive advantage when they are unable to meet their need for innovation through in-house development (Rigby & Zook, 2002). Beyond relying on internal processes such as research and development (R&D) activities to create innovations, firms may turn to the acquisition of other companies as a means of gaining access to innovations (e.g., Ahuja and Katila, 2001 and Rigby and Zook, 2002). This paper introduces an integrative model of the decision to acquire, arguing that the decision to acquire is affected not only by the motivation, but also by the ability, to undertake an acquisition. The first required element, motivation, can range from managerial opportunism and self-interested behavior (Jensen, 1988), to seeking the best outcomes for shareholders. Iyer and Miller (2008) study firm level factors in acquisition timing, as opposed to economy- or industry-wide influences, and consider behavioral motivations as an antecedent to acquisitions. The behavioral theory of the firm (Cyert & March, 1963) holds that firms engage in search in response to performance feedback ( Cyert and March, 1963 and Levinthal and March, 1981) and Iyer and Miller (2008) suggest that this search may lead to acquisitions. While motivation is a necessary antecedent to acquisitions, firms must also have the ability to identify and successfully integrate targets. The extant literature has considered the ability to acquire to depend on the availability of slack resources ( Jensen, 1993 and Penrose, 1959) or the potential synergy between acquirer and target firms ( Chatterjee and Wernerfelt, 1991, Porter, 1980, Porter, 1985 and Silverman, 1999) that may result in more market power through increased scale and scope. While Iyer and Miller (2008) consider performance feedback as a primary motivation for acquisition timing, they also consider slack and distress to be other factors to which the firm responds. Although financial slack is normally a required element, it seems evident that it takes more than monetary resources for a firm to successfully acquire. Financial slack can be available to multiple firms and hence distinguishing which ones are likely to engage in an acquisition requires a deeper understanding of ability. One such ability is that some firms are better equipped to identify targets and – perhaps more importantly – to make use of the knowledge they possess. Cohen and Levinthal (1990) refer to this capability as absorptive capacity, defining it as the ability of a firm to acquire, assimilate, transform, and exploit knowledge ( Cohen and Levinthal, 1990 and Zahra and George, 2002). Given the high cost of acquisitions, the identification of the right target among a large number of firms is essential. Thus, firms with higher levels of absorptive capacity are better able to evaluate potential targets and separate the wheat from the chaff, and thus should be more likely to make an acquisition than counterparts with less absorptive capacity. So, while motivation is necessary, the ability to acquire also plays an important role in the decision to acquire. Further, while motivation and ability each influence acquisition activity, this framework argues that the combined effect is also an important consideration. Prior applications of behavioral theory focus primarily on the influence of performance feedback on business-level strategy and search behaviors. For example, behavioral theory has been used to explain business level decisions such as search through increased R&D spending (Hundley, Jacobson, & Park, 1996), new ways of doing R&D (Bolton, 1993), and innovation and organizational learning (Greve, 2003a and Greve, 2003b). Although a firm may engage in different types of search, this paper focuses on one of the possible outcomes of these search activities: the likelihood of acquiring another firm. Underperformance, as understood in behavioral theory, might serve to motivate executives to consider making an acquisition aimed at restoring performance to expected levels. Adding to that nascent stream of research is one of this study's primary contributions. The focus of this paper is to extend the behavioral theory literature by demonstrating that failure to meet aspirations in innovative output influences corporate strategy. Specifically, the authors expect that a discrepancy between performance and aspirations in innovation will lead firms to search for solutions in order to close the performance–aspiration gap. Other studies of performance feedback to which firms respond typically focus on financial and accounting measures such as return on assets (e.g., Iyer & Miller, 2008), free cash flow, and net income. The authors extend theory here by introducing the notion that firms adjust their corporate strategy in response to underperformance in non-financial areas, specifically in innovative output. The authors also expand the understanding of acquisition behavior further by suggesting that both motivation and ability are necessary, and that the presence of both will have a reinforcing effect on the likelihood of acquisition.

The results of this study lend greater clarity to the process of acquisitions. Whereas previous studies look at the broader interplay between acquisitions and firm performance (Iyer & Miller, 2008), this paper focuses specifically on the role of innovation in the acquisition process. Firms performing below expectations for innovative output are more likely to acquire as are firms with a higher absorptive capacity and thus a greater ability to acquire. Both motivation and ability to acquire are important in a firm's decision to undertake an acquisition. In fact, the results indicate that a lack of absorptive capacity may in fact overwhelm a firm's motivation to acquire. This paper contributes to both behavioral theory and absorptive capacity. Departing from prior studies in behavioral theory, the authors use innovative output to measure the aspiration levels that would drive firms to engage in acquisitions. Prior behavioral research focuses almost exclusively on financial measures. Results show that, even with the inclusion of those prior financial measures, attainment discrepancy in innovative output is important in the decision to acquire. Also, while prior research tends to measure absorptive capacity using R&D expenditures, the results indicate that the class count measure reflects a different dimension of the underlying construct and adds explanatory power beyond simple R&D expenditures. As with most studies, the ability to generalize the findings here to other settings is limited since the sample contains only publicly traded manufacturing firms. The focus of this study is on acquisitions, but it is possible that firms may respond to innovation shortfalls in other ways, such as joint ventures or strategic alliances. Also, the extent of attainment discrepancy might dictate the type of search a firm engages in. The authors believe that these other possibilities represent fertile ground for future studies. Researchers should also consider the possibility that there are still other non-financial measures that could operate as feedback mechanisms to guide firm strategy. Another limitation of the study is that the key independent measures were constructed from patent data. In industries and/or companies for which patenting is less important, the findings are less relevant. Future research could explore and develop other non-patent measures of innovative output, such as new product introductions. Although this study attempts to control for other potential motives that might lead to acquisitions, there may still be acquisitions in the sample that are undertaken for reasons not captured in the model. Although the strategic nature of the choice between patents and internal trade secrets as alternative methods of protecting intellectual property argues strongly in favor of an internally referenced aspiration for innovative output, it is possible that social comparison does play a role that is not captured in this study. For example, firms might compare themselves to competitors that pursue IP strategies similar to their own, and might react based on comparison to those particular outside referents. While there is strong evidence that managers do react to the failure to meet internally-referenced aspirations, there is an opportunity to extend this work by studying the appropriate social aspirations. Moving beyond the current study, the next opportunity for exploration might be to consider the influence of pre-acquisition conditions on the post-acquisition innovative output. Although this study focuses on aggregate innovative output, looking more deeply at the type of patents and how they affect the acquisition process should also provide fertile ground for further research. Doing so will help extend the understanding of the acquisition process and perhaps offer prescriptive advice for managers planning a technology acquisition.