عنوان انگلیسی
Competitiveness is not that bad…at least in the East: Testing the hierarchical model of achievement motivation in the Asian setting
دانلود فوری مقاله + سفارش ترجمه 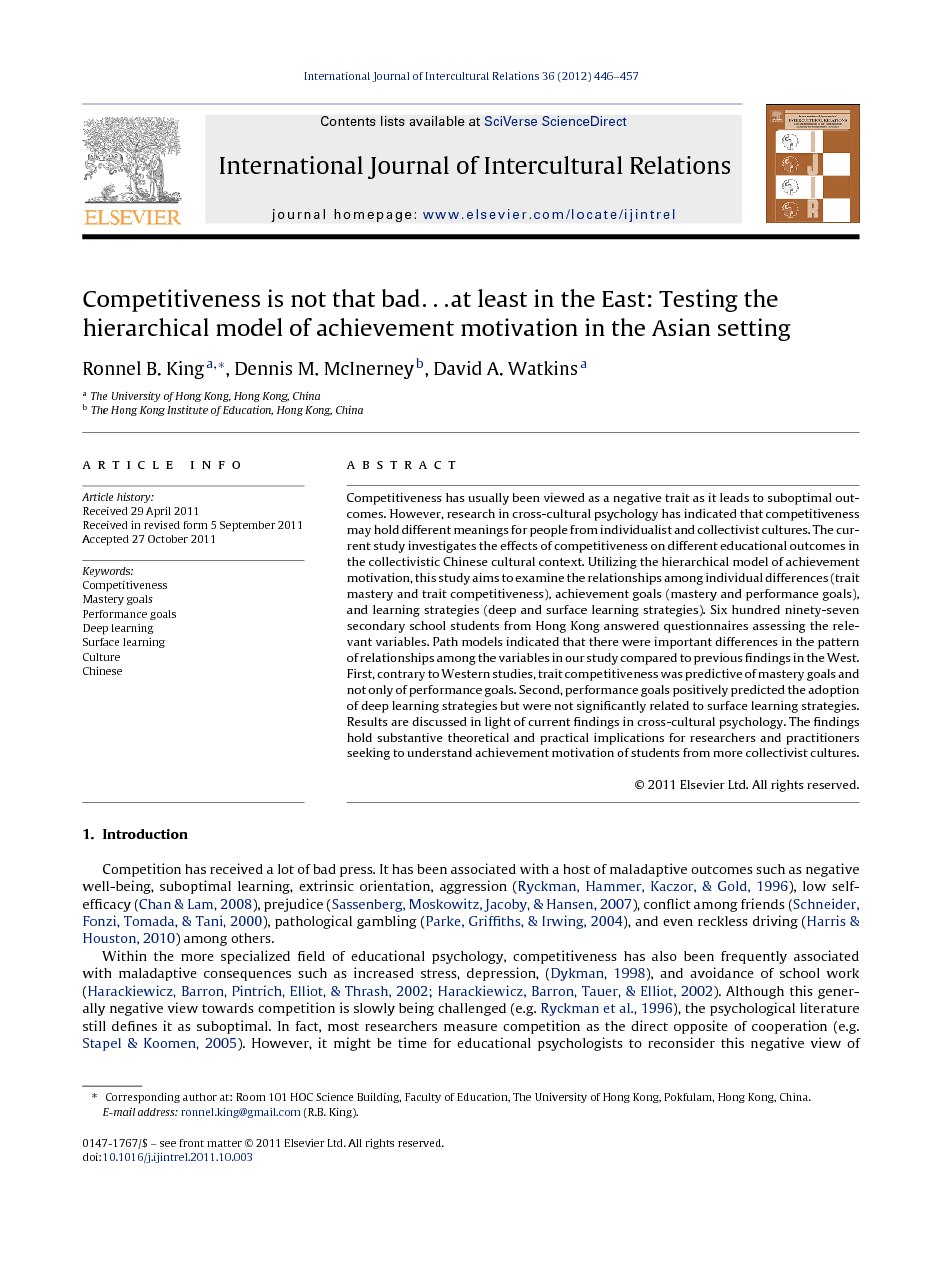 Competitiveness has usually been viewed as a negative trait as it leads to suboptimal outcomes. However, research in cross-cultural psychology has indicated that competitiveness may hold different meanings for people from individualist and collectivist cultures. The current study investigates the effects of competitiveness on different educational outcomes in the collectivistic Chinese cultural context. Utilizing the hierarchical model of achievement motivation, this study aims to examine the relationships among individual differences (trait mastery and trait competitiveness), achievement goals (mastery and performance goals), and learning strategies (deep and surface learning strategies). Six hundred ninety-seven secondary school students from Hong Kong answered questionnaires assessing the relevant variables. Path models indicated that there were important differences in the pattern of relationships among the variables in our study compared to previous findings in the West. First, contrary to Western studies, trait competitiveness was predictive of mastery goals and not only of performance goals. Second, performance goals positively predicted the adoption of deep learning strategies but were not significantly related to surface learning strategies. Results are discussed in light of current findings in cross-cultural psychology. The findings hold substantive theoretical and practical implications for researchers and practitioners seeking to understand achievement motivation of students from more collectivist cultures.

Competition has received a lot of bad press. It has been associated with a host of maladaptive outcomes such as negative well-being, suboptimal learning, extrinsic orientation, aggression (Ryckman, Hammer, Kaczor, & Gold, 1996), low self-efficacy (Chan & Lam, 2008), prejudice (Sassenberg, Moskowitz, Jacoby, & Hansen, 2007), conflict among friends (Schneider, Fonzi, Tomada, & Tani, 2000), pathological gambling (Parke, Griffiths, & Irwing, 2004), and even reckless driving (Harris & Houston, 2010) among others. Within the more specialized field of educational psychology, competitiveness has also been frequently associated with maladaptive consequences such as increased stress, depression, (Dykman, 1998), and avoidance of school work (Harackiewicz et al., 2002a and Harackiewicz et al., 2002b). Although this generally negative view towards competition is slowly being challenged (e.g. Ryckman et al., 1996), the psychological literature still defines it as suboptimal. In fact, most researchers measure competition as the direct opposite of cooperation (e.g. Stapel & Koomen, 2005). However, it might be time for educational psychologists to reconsider this negative view of competitiveness given that recent research in cross-cultural psychology has indicated that competition is a culture-bound construct. It holds a different meaning for peoples from different cultures (Grum and Kolenc, 2008, Houston et al., 2005 and Stapel and Koomen, 2001). More specifically, within the educational domain it has been found that students from individualist countries are more likely to perceive competition as negative leading to a zero-sum situation while students from collectivist societies, on the other hand, are more likely to perceive competition as positive, leading to the improvement of themselves and society (Fulop, 1999, Fulop, 2005, Watkins, 2007 and Watkins, 2009). These divergent views on competition may lead to differences in how competitiveness influences various outcomes. Given these cross-cultural differences, it might be possible that the effects of competitiveness in a collectivistic culture like China would be different from those found in Western settings. To test this proposition, we used the hierarchical model of achievement motivation (Elliot, 2005 and Elliot and Church, 1997) which posited that trait variables/individual differences predicted achievement goals which in turn predicted various outcomes. The utility of this model lay in the fact that it included two key constructs that are closely associated with competition in the educational psychology literature: trait competitiveness and performance goals (Harackiewicz et al., 1997, Harackiewicz et al., 2002a and Harackiewicz et al., 2002b). This allowed us to test whether the pattern of relationships found among these constructs in the West was also applicable to the collectivistic Chinese setting. Studies in the West have unanimously hailed trait mastery and mastery goals as beneficial while casting a more negative light on competitiveness and performance goals (Midgley et al., 2001a and Midgley et al., 2001b). However, because of cross-cultural differences in the meaning of competition, the relationships among these constructs in the Chinese setting may be different from what previous research has found in the West.

We found interesting differences between our study and previous studies conducted in the West. First, contrary to Western findings, trait competitiveness was positively related to both mastery and performance goals. Second, we found that performance goals were only related to deep learning strategies and not to surface learning strategies. This suggests that among Chinese students, both trait competitiveness and the adoption of performance goals seem to be related to positive outcomes. These paradoxical findings could be accounted for by cultural factors. This work, however, only represented an initial exploration. Clearly, more research is needed to draw more substantial conclusions. Thrash and Elliot (2001, pp. 12–13) claimed that “…mastery and performance goals, respectively, appear to have become nebulous mixtures of that which is ‘good’ and that which is ‘bad.”’ This study points to the need to contextualize this statement in different cultures. These results should also make us wary of generalizing results obtained in the West to the East. As Watkins (2000, p. 166) noted, “Western dichotomies…do not seem to travel to the Orient.”