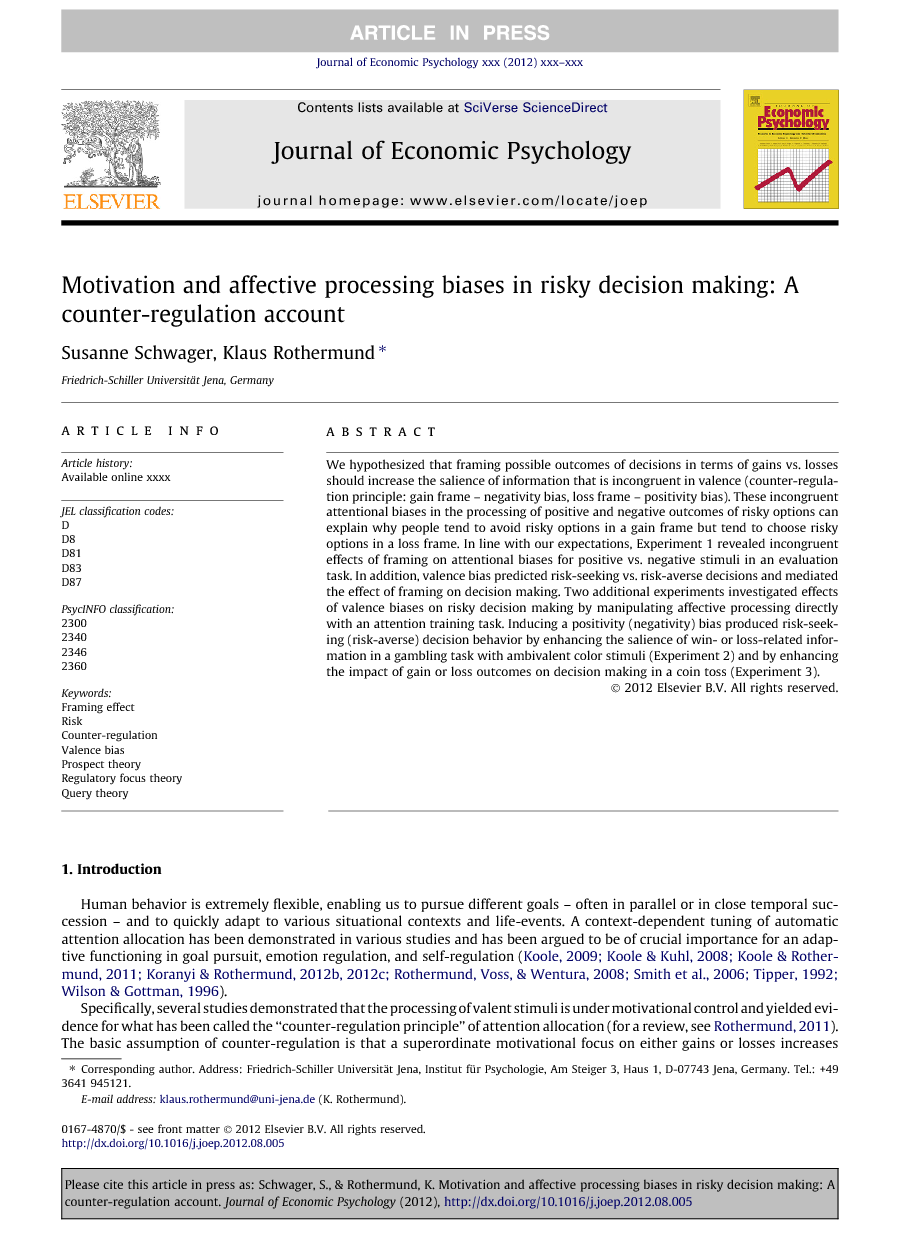 We hypothesized that framing possible outcomes of decisions in terms of gains vs. losses should increase the salience of information that is incongruent in valence (counter-regulation principle: gain frame – negativity bias, loss frame – positivity bias). These incongruent attentional biases in the processing of positive and negative outcomes of risky options can explain why people tend to avoid risky options in a gain frame but tend to choose risky options in a loss frame. In line with our expectations, Experiment 1 revealed incongruent effects of framing on attentional biases for positive vs. negative stimuli in an evaluation task. In addition, valence bias predicted risk-seeking vs. risk-averse decisions and mediated the effect of framing on decision making. Two additional experiments investigated effects of valence biases on risky decision making by manipulating affective processing directly with an attention training task. Inducing a positivity (negativity) bias produced risk-seeking (risk-averse) decision behavior by enhancing the salience of win- or loss-related information in a gambling task with ambivalent color stimuli (Experiment 2) and by enhancing the impact of gain or loss outcomes on decision making in a coin toss (Experiment 3).

Human behavior is extremely flexible, enabling us to pursue different goals – often in parallel or in close temporal succession – and to quickly adapt to various situational contexts and life-events. A context-dependent tuning of automatic attention allocation has been demonstrated in various studies and has been argued to be of crucial importance for an adaptive functioning in goal pursuit, emotion regulation, and self-regulation (Koole, 2009, Koole and Kuhl, 2008, Koole and Rothermund, 2011, Koranyi and Rothermund, 2012b, Koranyi and Rothermund, 2012c, Rothermund et al., 2008, Smith et al., 2006, Tipper, 1992 and Wilson and Gottman, 1996). Specifically, several studies demonstrated that the processing of valent stimuli is under motivational control and yielded evidence for what has been called the “counter-regulation principle” of attention allocation (for a review, see Rothermund, 2011). The basic assumption of counter-regulation is that a superordinate motivational focus on either gains or losses increases automatic attention allocation to stimuli that are opposite in valence to the current affective-motivational state. Several experiments revealed that experiencing or anticipating positive (negative) outcomes and events increases the salience of negative (positive) information ( Akalis, 2008, Derryberry, 1993, Ellenbogen et al., 2002, Rothermund, 2003, Rothermund et al., 2011, Rothermund et al., 2001, Rothermund et al., 2008 and Wentura et al., 2009). Automatic allocation of attention to information that is antagonistic to the current emotional or motivational state helps to maintain a balanced view on things. By counteracting an escalation of affective states and motivational orientations, counter-regulation thus serves to prevent emotional and motivational extremities, impulsivity, and rigidity ( Koole and Rothermund, 2011, Quirin et al., 2011, Rothermund, 2011 and Schwager and Rothermund, submitted for publication). The aim of the current study is to transfer the idea of counter-regulation to the domain of risky decision making. Negative and positive outcomes of decisions are a key feature of choice situations. More specifically, humans tend to focus on the change of the status quo (gains or losses) rather than on the absolute value of outcomes when making decisions (Kahneman & Tversky, 1979). Importantly, framing potential outcomes in terms of either gains or losses has been shown to have a marked impact on decision making: When choosing between a “risky” and a “secure” option that have similar absolute expected values, people in a loss frame tend to prefer the risky option whereas people in a gain frame behave risk averse (so-called “reflection effect”; Kahneman & Tversky, 1984; for a review on findings, see Kühberger, 1998). The standard explanation for the framing effect focuses on the fact that the risky option always includes a more extreme outcome than the secure option (this follows from the fact that both options are assumed to have the same expected value). Since objective outcomes are translated into subjective utilities by an s-shaped gradient (Kahneman & Tversky, 1984), extreme gains (losses) are subjectively experienced as being less valuable (harmful) due to the asymptotic shape of the value function. This in turn induces a tendency to avoid the (less valuable) risky option for gains but to prefer the (less harmful) risky option for losses. Some other explanations have been proposed in the literature to account for the effects of framing on risk seeking vs. risk aversion (e.g., Kühberger & Tanner, 2010). Most of these explanations are similar to the original explanation, however, in that they focus on the translation of objective gains and losses into subjective value, assuming either quantitative or qualitative differences with regard to the subjective representation of outcomes of risky and secure options. Counter-regulation in affective processing provides an alternative explanation for framing effects on decision making that focuses on the motivational implications of the gain vs. loss framing. Our account consists of two parts (see Fig. 1). First, we assume that a framing manipulation induces a corresponding motivational orientation. Framing outcomes in terms of gains or losses is equivalent to creating a positive or negative outcome focus. According to the counter-regulation principle, such a positive/negative outcome focus is accompanied by an automatic attention allocation to information of the opposite valence (Rothermund et al., 2001 and Rothermund et al., 2008). Thus, in a gain frame negative information should increase in salience, whereas in a loss frame positive aspects should tend to catch or hold attention. This will be referred to as the incongruency effect of framing on attention allocation.

The aim of the present study was to examine the influence of counter-regulatory processes on affective processing (Rothermund et al., 2008) in the framing paradigm and to investigate the importance of valence biases for decisions under uncertainty. We proposed and tested a model consisting of two components: an incongruency effect of framing on valence biases and a congruency effect of valence biases on risk tendencies. First, it was hypothesized that a framing manipulation induces an outcome focus that leads to a counter-regulatory attention allocation to stimuli with an opposite valence to the current frame, which was tested by assessing affective processing biases with an evaluation task. Results of the first experiment support the claim that valence biases are indeed affected by gain and loss framing manipulations in an incongruent fashion. These findings complement earlier research showing similar incongruent effects of motivational outcome focus manipulations on valence biases in affective processing (Rothermund et al., 2001, Rothermund et al., 2008, Rothermund et al., 2011 and Wentura et al., 2009). Second, we assumed that a positive or negative valence bias increases the importance of positive or negative information for individual choices. As the risky option always includes the most extreme positive or negative information, a positivity bias highlights this positive outcome and leads to risk-seeking compared to a negative attentional focus which emphasizes the negative outcome and produces risk-aversion. The first experiment already indicated such a congruency effect by a significant mediation of the framing effect on decision making by valence biases. In Experiments 2 and 3, valence biases were manipulated directly with a modified dot probe task (Mathews & MacLeod, 2002) and could be shown to affect risky decisions in a congruent way (positivity bias – high risk, negativity bias – low risk). In a first situation, valence biases affected the perceived probability of winning/losing by influencing the perceptual salience of win vs. loss information in an ambiguous color stimulus (Experiment 2). In a second situation with fixed probabilities of winning and losing (coin toss), valence biases affected the impact of possible gain/loss outcomes on decision making (Experiment 3). As this study investigates the role of counter-regulation in the field of decision making, it goes beyond previous studies that investigated counter-regulation in the domain of affective processing (Rothermund et al., 2008 and Wentura et al., 2009), emotion regulation or coping (DeWall et al., 2011, Quirin et al., 2011 and Schwager and Rothermund, submitted for publication). That counter-regulation can be elicited by certain decision situations (focusing on either the attainment of gains or the avoidance of losses) and in addition also has an impact on risk tendencies in decision processes broadens the scope of validity of this theory and emphasizes the importance of this basic automatic mechanism.