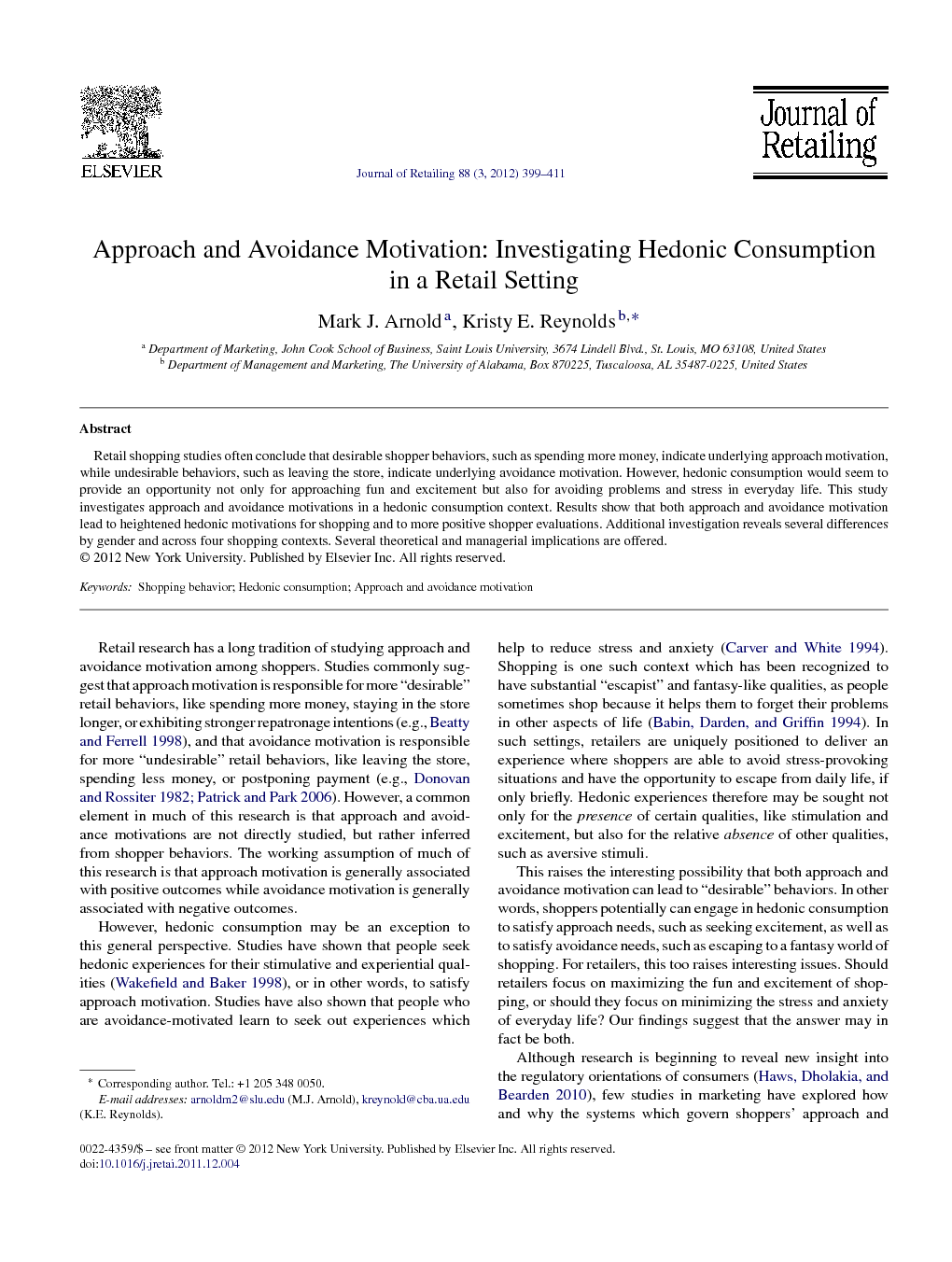 Retail shopping studies often conclude that desirable shopper behaviors, such as spending more money, indicate underlying approach motivation, while undesirable behaviors, such as leaving the store, indicate underlying avoidance motivation. However, hedonic consumption would seem to provide an opportunity not only for approaching fun and excitement but also for avoiding problems and stress in everyday life. This study investigates approach and avoidance motivations in a hedonic consumption context. Results show that both approach and avoidance motivation lead to heightened hedonic motivations for shopping and to more positive shopper evaluations. Additional investigation reveals several differences by gender and across four shopping contexts. Several theoretical and managerial implications are offered.

Approach and avoidance motivation Approaching pleasure and avoiding pain is governed by two underlying neurobiological systems (Gray, 1987 and Gray, 1990). The behavioral activation system (BAS) reflects the sensitivity to rewards and positive stimuli, and facilitates movement toward positive goals. The behavioral inhibition system (BIS) reflects the sensitivity to punishment cues and negative stimuli, and guides behavior to avoid painful outcomes (Carver and White 1994). Both systems represent distinct structures in the nervous system, vary between individuals in composition and strength, and produce a perceptual vigilance, emotional reactivity, and a behavioral predisposition toward positive/reward or negative/punishment stimuli respectively ( Carver and White, 1994, Elliot and Thrash, 2002 and Gray, 1990). In recent personality research, the BIS and BAS have been directly studied in such areas as message framing, predictions of risk, and satisfaction in daily life and experiences (e.g., Mann et al., 2004 and Updegraff et al., 2004). Numerous other studies have examined BIS and BAS in relation to emotion, physiological brain activity, abnormal psychology and childhood development. The BIS and BAS are also closely related to the self-regulation constructs of promotion and prevention focus, both of which have received substantial attention in marketing studies (see Haws, Dholakia, and Bearden 2010 for an excellent comparison of measures). These regulatory systems govern how people pursue goals, and can be a chronic predisposition of individuals or can be situationally induced (Aaker and Lee, 2001, Higgins et al., 2001 and Semin et al., 2005). Recent studies have examined promotion and prevention focus in the context of choice and temporal perspective (Mogilner, Aaker and Pennington 2008), assessments of value (Avnet and Higgins 2006), and emotional intelligence (Arnold and Reynolds 2009), among other areas. A motivational hierarchy The dominant conceptualization of the interrelationships between goals and motivations is hierarchical (Austin and Vancouver 1996). Such hierarchies often make distinctions between motivations and goals which are influential across situations and those which are confined to specific contexts (see e.g., the 3M Model; Mowen 2000).

We believe that the results from this study will provide many additional areas needing further investigation, of which we only mention a few. For example, since the BAS and BIS produce different emotions (Carver 2004), it is quite possible that approach- versus avoidance-motivated individuals have very different emotional experiences in consumption. Additional studies can also investigate the extent to which the BIS and BAS moderate constructs which can be manipulated by managers, like advertising, as well as investigate antecedents (e.g., personality traits) to and consequences (e.g., USV) of the BIS and BAS. Finally, an application of regulatory focus theory (e.g., Arnold and Reynolds 2009) to hedonic consumption would seem particularly beneficial. A number of limitations should be mentioned as well. First, we should note caution in interpreting our results due to a bias toward finding significance in parameter estimates in large samples. We also note the limitations of the BAS and BIS scales, and await future research which may provide a more refined measurement of approach and avoidance motivations. Further, our findings here on gender and context effects are limited, and additional investigation of these influences as well as others would seem especially fruitful. Additionally, an investigation of more concrete surface-level traits would seem productive. Finally, although we offer a number of theoretical and practical implications regarding the BAS and the BIS, our findings are only general in nature. We await future research to fully describe the psychology underlying such behaviors.