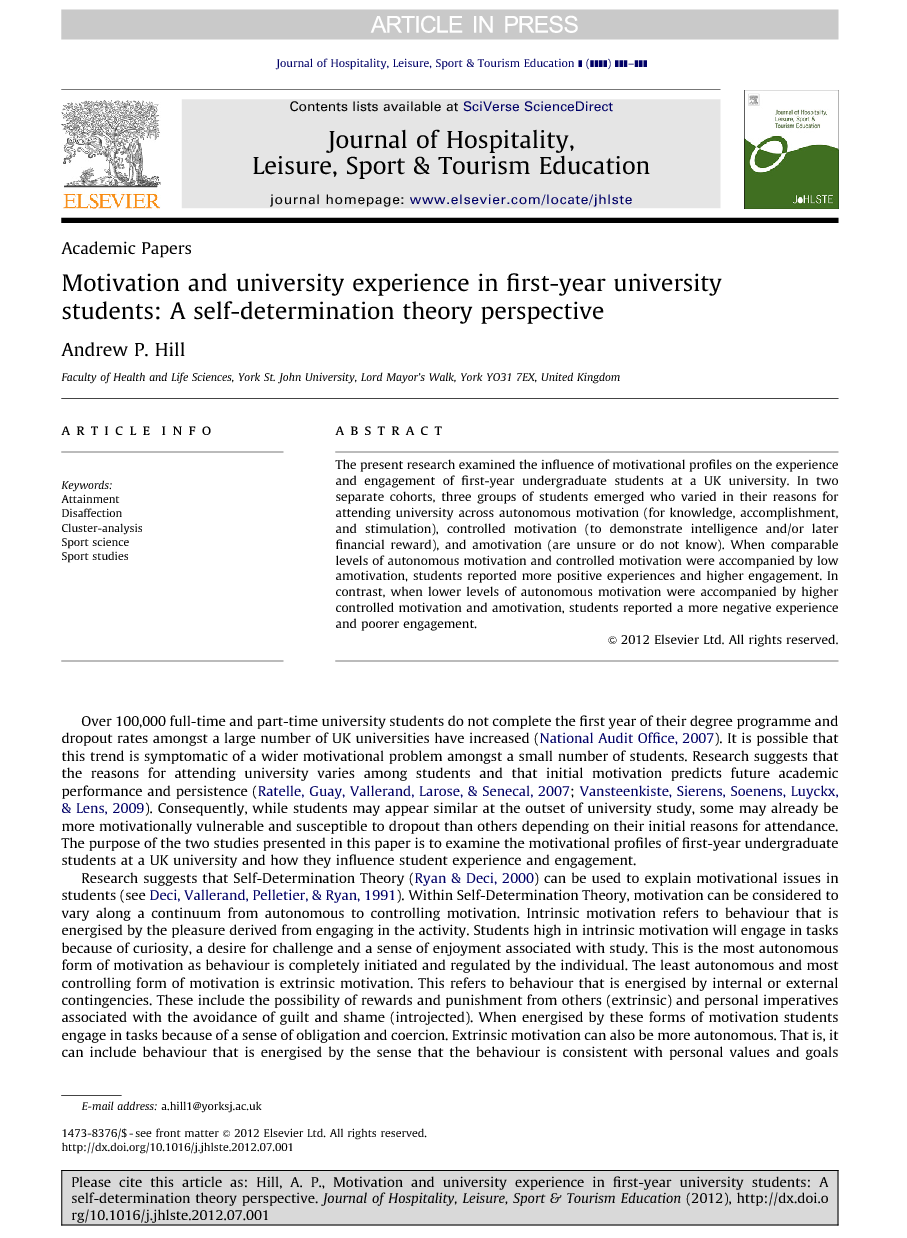 Research suggests that utilising Self-Determination Theory (Ryan & Deci, 2000) along with a person-centred approach may be useful when attempting to understand motivational issues in undergraduate students. Adopting this theory and approach, the two studies presented here found that discrete motivational profiles exist among first-year students and that these groups differ in their experience and engagement. In doing so, the current research supports suggestions that the motivation of university students is best captured by combinations of both autonomous and controlling motivation (Ratelle et al., 2007). In addition, although excluded in previous research, the current studies indicate that amotivation contributes to differences between groups and therefore warrants consideration. Differences between the current findings and previous research in terms of the motivational profiles that emerged are to a large degree expected due to the exploratory nature of the analytical approach. However, they also allude to the strong influence of contextual factors. Previous research has found different motivational profiles across educational settings (e.g., high-school versus university; Ratelle et al., 2007). The current findings suggest that motivational profiles may also differ within educational settings (e.g., different universities, programmes, and academic years). Research is therefore required that examines the sources and meaning of variability in the motivational profiles that emerge. 3.1. Autonomous versus controlling motivation The findings are broadly consistent with research in this area that attest to the benefits of autonomous motivation in terms of both emotional experiences and behavioural engagement in students (Black and Deci, 2000 and Vansteenkiste et al., 2004). The findings also provide support for the possibility that autonomous motivation supersedes the impact of controlling motivation for students (Ratelle et al., 2007). In both studies, providing autonomous motivation was present to a similar level as controlling motivation, motivational profiles typically led to more positive outcomes. This was evident in both initial student experience, as well as the manner in which student experience changed across the academic year. It appears that autonomous motivation provides an ongoing source of positive emotional experiences and behavioural commitment not associated with controlling motivation. Consequently, promoting more autonomous motivation for attending university, and fostering more autonomous motivation during university study, is necessary in order to avoid motivational difficulties. Fortunately, Self-Determination Theory offers a useful framework to guide the development of more autonomous motivation. Self-Determination Theory describes a process whereby controlling motivation can become more autonomous when environments are perceived to be autonomy-supportive (Deci et al., 1991). In context of teacher behaviour, autonomy support has been described as a motivational style where students’ needs, interests, and preferences are encouraged to guide learning and activities (Reeve, Jang, Carrell, Jeon, & Barch, 2004). Research suggests that instructors can be taught to be more autonomy-supportive relatively easily and that its provision is associated with higher intrinsic motivation and better engagement among students (Reeve and Jang, 2006 and Reeve et al., 2004). A number of practical strategies aimed at promoting perceptions of autonomy support have been identified by Reeve and colleagues (e.g., Reeve and Jang, 2006, Reeve et al., 1999 and Reeve and Halusic, 2009). Briefly, these include offering choices, encouraging independent problem-solving, involving individuals in the decision-making process, minimising the use of pressure, giving rationales when choice is constrained, avoiding the use of controlling language (e.g., ‘you should’ or ‘you must’), and communicating relevance. When systematically applied, these strategies provide a means of improving the quality of motivation, experience, and attainment of all first-year university students. 3.2. Limitations There are a number of noteworthy limitations to the current study. As noted earlier, cluster analysis is an exploratory technique that can create as well as reveal structure (Breckenridge, 2000). Consequently, establishing the validity of the current cluster solution through further replication and alternative analytical strategies is necessary, especially in light of the mixed findings regarding the replication of the three groups. An additional consideration is that due to the design (survey-based and longitudinal) students with higher levels of behavioural persistence (course completors) are likely to be over-represented in the two studies. Consequently, the motivationally vulnerable group, from which those most likely to dropout would belong, may be under-represented (Vallerand & Bissonnette, 1992). Future research should therefore establish motivational profiles as early as possible and include actual course dropout as an outcome variable. The study also employed self-report measures. Future research should consider using alternative sources of measurement, such as observation or other-report scales, to compliment this form of measurement when establishing motivational profiles and university experiences. Finally, motivation was measured in reference to university study, rather than programme specific study. Although it would be expected that motivation would be similar, course-specific measurement may enhance the predictive ability of the motivational profiles and would be advantageous in future research (Vallerand & Bissonnette, 1992).