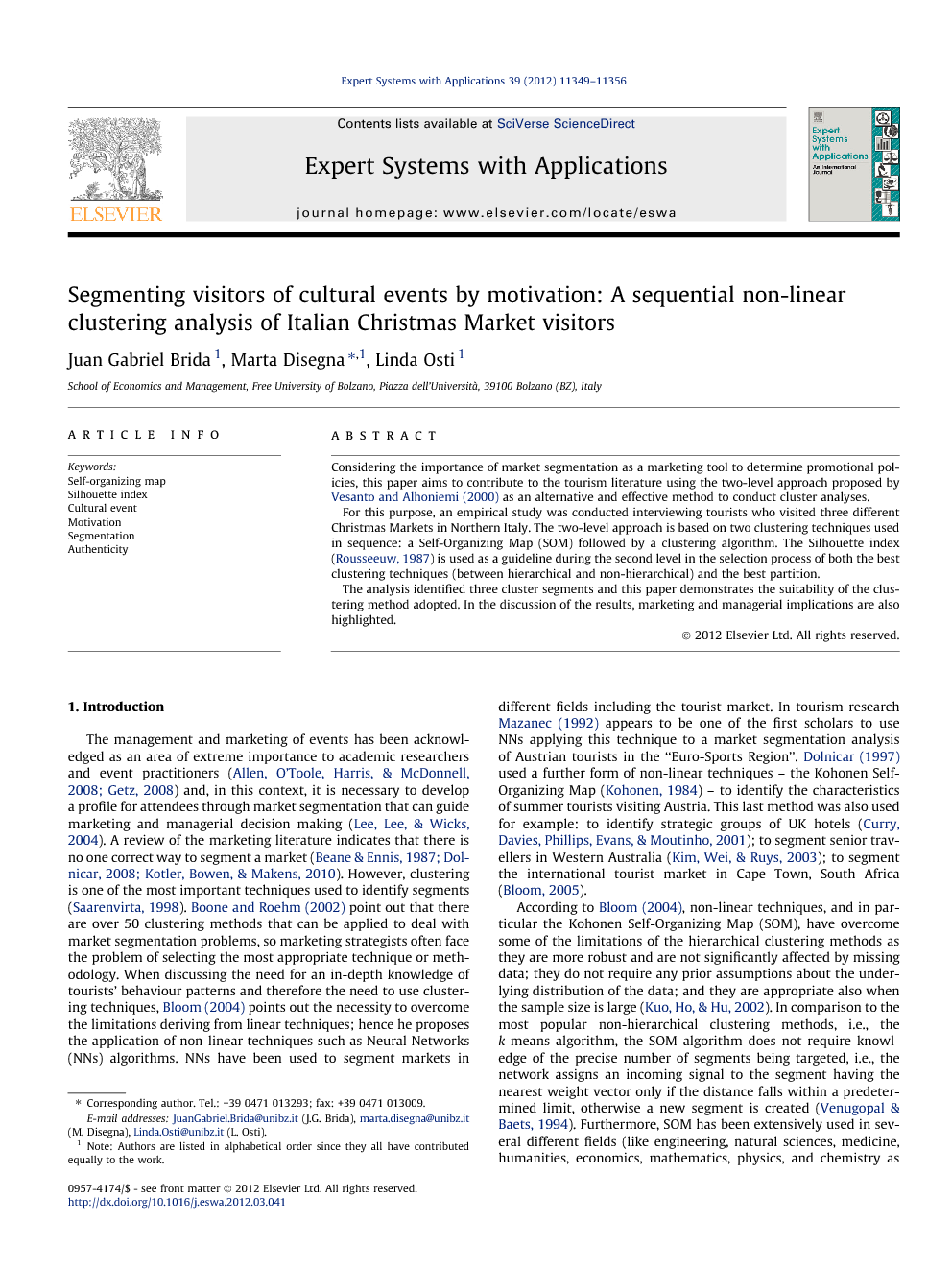 Considering the importance of market segmentation as a marketing tool to determine promotional policies, this paper aims to contribute to the tourism literature using the two-level approach proposed by Vesanto and Alhoniemi (2000) as an alternative and effective method to conduct cluster analyses. For this purpose, an empirical study was conducted interviewing tourists who visited three different Christmas Markets in Northern Italy. The two-level approach is based on two clustering techniques used in sequence: a Self-Organizing Map (SOM) followed by a clustering algorithm. The Silhouette index (Rousseeuw, 1987) is used as a guideline during the second level in the selection process of both the best clustering techniques (between hierarchical and non-hierarchical) and the best partition. The analysis identified three cluster segments and this paper demonstrates the suitability of the clustering method adopted. In the discussion of the results, marketing and managerial implications are also highlighted.

The management and marketing of events has been acknowledged as an area of extreme importance to academic researchers and event practitioners (Allen et al., 2008 and Getz, 2008) and, in this context, it is necessary to develop a profile for attendees through market segmentation that can guide marketing and managerial decision making (Lee, Lee, & Wicks, 2004). A review of the marketing literature indicates that there is no one correct way to segment a market (Beane and Ennis, 1987, Dolnicar, 2008 and Kotler et al., 2010). However, clustering is one of the most important techniques used to identify segments (Saarenvirta, 1998). Boone and Roehm (2002) point out that there are over 50 clustering methods that can be applied to deal with market segmentation problems, so marketing strategists often face the problem of selecting the most appropriate technique or methodology. When discussing the need for an in-depth knowledge of tourists’ behaviour patterns and therefore the need to use clustering techniques, Bloom (2004) points out the necessity to overcome the limitations deriving from linear techniques; hence he proposes the application of non-linear techniques such as Neural Networks (NNs) algorithms. NNs have been used to segment markets in different fields including the tourist market. In tourism research Mazanec (1992) appears to be one of the first scholars to use NNs applying this technique to a market segmentation analysis of Austrian tourists in the “Euro-Sports Region”. Dolnicar (1997) used a further form of non-linear techniques – the Kohonen Self-Organizing Map (Kohonen, 1984) – to identify the characteristics of summer tourists visiting Austria. This last method was also used for example: to identify strategic groups of UK hotels (Curry, Davies, Phillips, Evans, & Moutinho, 2001); to segment senior travellers in Western Australia (Kim, Wei, & Ruys, 2003); to segment the international tourist market in Cape Town, South Africa (Bloom, 2005). According to Bloom (2004), non-linear techniques, and in particular the Kohonen Self-Organizing Map (SOM), have overcome some of the limitations of the hierarchical clustering methods as they are more robust and are not significantly affected by missing data; they do not require any prior assumptions about the underlying distribution of the data; and they are appropriate also when the sample size is large (Kuo, Ho, & Hu, 2002). In comparison to the most popular non-hierarchical clustering methods, i.e., the k-means algorithm, the SOM algorithm does not require knowledge of the precise number of segments being targeted, i.e., the network assigns an incoming signal to the segment having the nearest weight vector only if the distance falls within a predetermined limit, otherwise a new segment is created (Venugopal & Baets, 1994). Furthermore, SOM has been extensively used in several different fields (like engineering, natural sciences, medicine, humanities, economics, mathematics, physics, and chemistry as suggested by (Oja, Kaski, & Kohonen, 2003) also thanks to its data visualization capabilities ( Churilov et al., 2005 and Länsiluoto and Eklund, 2008). Although the SOM algorithm has been used in several different cases, it is less often used in the field of tourism and, even less, for the segmentation of events’ visitors. As underlined by Vesanto and Alhoniemi (2000), the visualization of the SOM results can only be used in order to obtain qualitative information. To produce quantitative descriptions on the observations, interesting groups of map units must be selected from the SOM. In order to reach this purpose, Vesanto and Alhoniemi (2000) proposed a two-level approach where the observations were first clustered through the SOM, and then, the weight vectors of the SOM were clustered again using a further suitable technique. The two-level approach proposed by Vesanto and Alhoniemi (2000) should not be confused with the two-stage method proposed by Kuo et al. (2002) in which the SOM is used only to determine both the number of clusters and the starting point in order to employ the k-means algorithm. The Vesanto and Alboniemi approach is recent and innovative with promising potentials and is currently being applied to different research fields among which biological process (Aguado, Montoya, Borras, Seco, & Ferrer, 2008), environmental sustainability and green marketing ( Mostafa, 2009 and Mostafa, 2010), biomedicine (Wang, Delabie, Aasheim, Smeland, & Myklebost, 2002), and acoustic emission (Godin, Huguet, & Gaertner, 2005). However it has not yet been used in tourism and event marketing. The data presented and analysed in this paper consist of 1193 responses by tourists visiting Christmas Markets in three cities of the Northern Italy: Bolzano, Brunico, and Trento. The sample size justifies the choice of the two-level approach in order to segment the tourists. The first and foremost Christmas Market was held in Berlin in the 18th century and its primary function was to create a place for families to purchase children’s presents. Trentino–South Tyrol (the region of our investigation) has been the first area of Italy to organise and celebrate Christmas Markets according to German culture. In fact, historically Trentino–South Tyrol was part of Austria till 1919, and still today around three quarters of the inhabitants of South Tyrol speak German as their first language and belong to the German/Austrian culture. In general Christmas Markets are open for the four weeks of advent from the end of November leading to Christmas Eve. The market stalls sell typical local products including food and drink, Christmas decorations, small gifts and presents, and local artefacts. The term “market” within the name of this event, may bring into people’s mind the idea of a trade and shopping event. However, Christmas Markets are much more than just a shopping experience. In fact, shopping for Christmas presents has become just a simple side product of the event. The entire organisation of Christmas Markets in the 1970s, 1980s and 1990s has been about creating an event where people can experience the Christmas atmosphere according to the German tradition. The paper will first present the research objectives followed by a presentation of the SOM algorithm and the internal validity measures. The paper continues with the outcomes of the empirical results and finishes with a discussion of the results, including practical implications of the two-level approach, limitations of the research and future perspectives.

The segmentation of Christmas Markets can be a useful tool for event planners and destination managers and marketers to identify effective marketing activities and business strategies. Toward this end, this study conducted a two-level process of clustering (SOM and k-means algorithms) based on the motivation variables. In contrast with the other segmentation methods used in the tourism literature based on factor analysis (as a conglomerated variables) follow by a cluster method (hierarchical or non-hierarchical), this study considers the original set of variables using all available information. As underlined by Chen and Hsu (1999), there are two main reasons to use all variables: first, results of the factor analysis could be different when researcher uses different rotation methods; second, the original variables may be more interpretable than derived constructs with factor labels because the naming and the interpretation of the construct involve personal judgment that we wanted to avoid. The use of the two-level approach proposed by Vesanto and Alhoniemi (2000) together with an internal validity measure, as a guideline in the selection of both the best cluster algorithm and the best partition have resulted to be suitable techniques. So far, tourism research practice has used subjective measurers to determine both the number and the algorithm of the clusters. The application of the Silhouette index reduces biases due to subjective preferences of the researchers and, sometimes, explanatory constraints. The analyses reveal three different segments: “Business people”, “Christmas fans” and “General tourists”. “Business people” are not interested to visit the city and the Christmas Market, because the Market and Christmas atmosphere are not important factors and do not represent an authentic experience for them. On the other side, “Christmas fans” are enthusiastic about Christmas and the Christmas atmosphere created by the Christmas Market, and these are the main pulling factor for the trip. This is the biggest cluster and represents more than half of the sample. “General tourists” are those who undertake the trip to relax and when they are in town they are enthusiastic about the city itself and its attractions, the market and the Christmas atmosphere it creates. The results demonstrates that, advertising campaigns about the Christmas Market should take place mainly in the North of Italy; while the city, all of its attractions and amenities, and the opportunities it offers to relax and disconnect from the daily life should be advertised in the centre and south of Italy, and internationally. Our analysis suggests that in order to attract more “Business people” event marketers should organize new entertainment activities linked to relaxation and local food and drinks. “General tourists” appear to be strongly attracted by the event, however they are also keen to fully experience the destination with all its cultural and natural attractions. For this reason it is necessary to market to them a bundle of services that cover the entire destination. As regards “Christmas fans”, event managers must perform a control of the quality of the products and activities offered at the event, specifically in terms of authenticity, so that the Christmas atmosphere and the local products satisfy the need for authenticity for this group of visitors. As expected, the results obtained in this research are consistent with other cultural events studies and recommend event planners and marketers to consider the issue of authenticity with particular attention when organizing event activities. This study has some limitations: the segmentation analysis is based on a non-random sampling technique. Thus, to verify if the results of this research are valid for other cultural events, a future study will be required in other cultural events, in other years, and/or other towns. Finally, this research could be extended in the future by comparing SOM with other segmentation techniques, both linear and non-linear techniques, evaluating which of them is better for segmenting Christmas Market visitors.