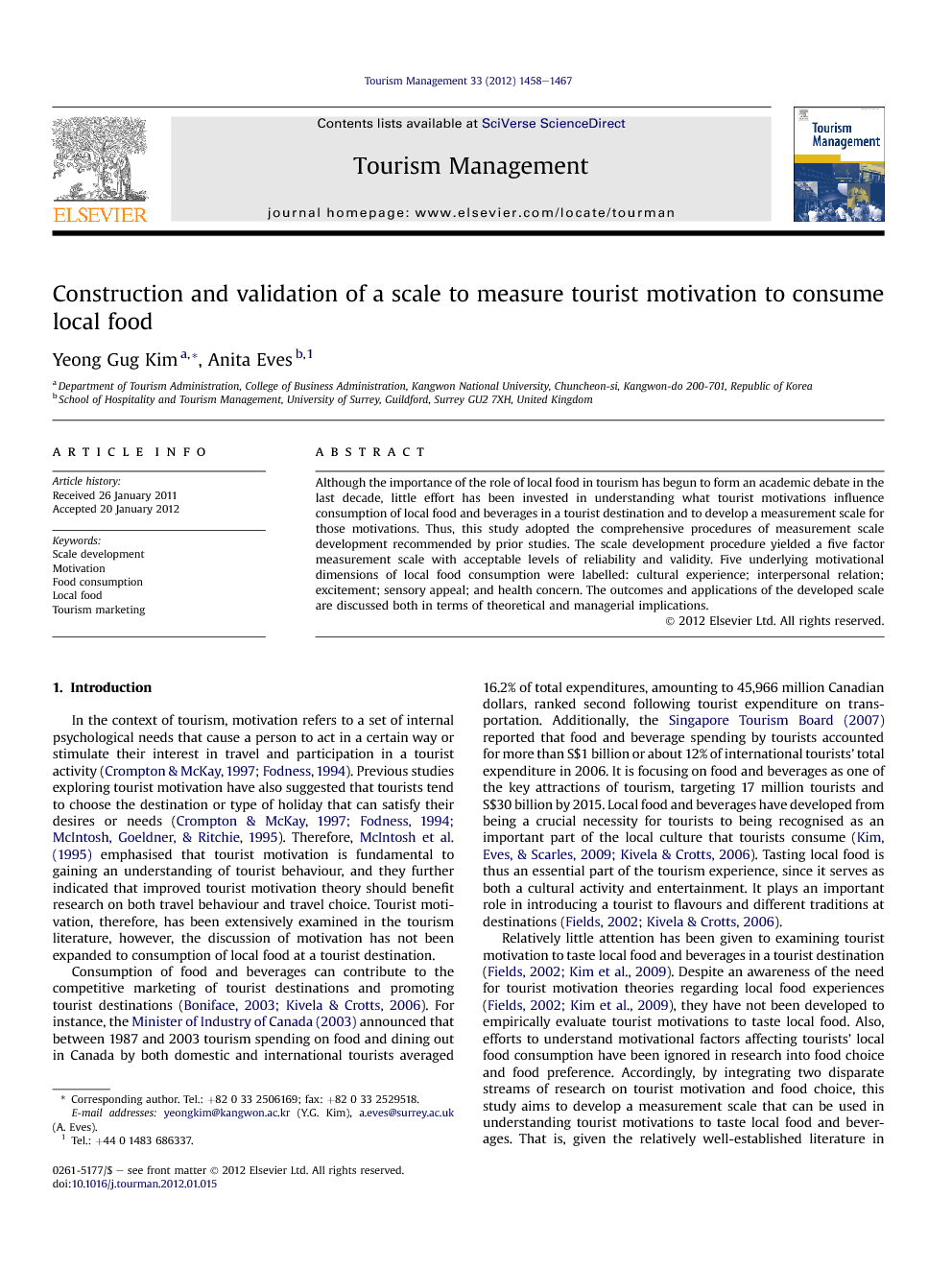 Although the importance of the role of local food in tourism has begun to form an academic debate in the last decade, little effort has been invested in understanding what tourist motivations influence consumption of local food and beverages in a tourist destination and to develop a measurement scale for those motivations. Thus, this study adopted the comprehensive procedures of measurement scale development recommended by prior studies. The scale development procedure yielded a five factor measurement scale with acceptable levels of reliability and validity. Five underlying motivational dimensions of local food consumption were labelled: cultural experience; interpersonal relation; excitement; sensory appeal; and health concern. The outcomes and applications of the developed scale are discussed both in terms of theoretical and managerial implications.

The current study established a reliable and valid, 26 item scale to measure the factors motivating tourists to consume local foods in tourist destinations, based on British tourists. The study adds to a growing body of literature on tourism and food, by establishing representative constructs of tourist consumption of local food at tourist destinations. This study integrated the two bodies of travel motivations and food choice research, which has also been little studied. That is, the current study identified nominated motivations, by combining literature on tourism and food research, and these were theoretically and empirically supported by both research areas. Therefore, this study not only suggests key motivations, derived from empirical evidence but also provides an example to be further examined in future research in combined research fields. In terms of the general practical and managerial implications of the present study, the findings provide useful information for marketers of tourism and the food industries. Motivations found in this study have shown why tourists taste local food and beverages on their travels. Hence, marketers should design marketing communications in a way which can motivate tourists to try local food during their holidays, based on the results showing key motivations. For example, marketers should offer opportunities related to local food, such as taking traditional cookery classes or visiting local food museums, because tourists’ desire to learn about a different culture can be realised by experiencing local food. With regard to sensory appeal, marketers should understand that in regions where consumption of regional cuisine is part of the tourist experience, consumption of local food can enrich tourist experiences by reinforcing a sense of unique regional identity and place. Hence, they should encourage cooks and chefs to develop the kitchen skills to produce better taste, smells and appearance of local foods. Also they should make an effort to emphasise the authenticity of local cuisine by appealing to the sense of the traditional taste, smells and appearance of food. ‘Interpersonal relation’ includes social interaction with other people. Thus, marketers should emphasise that attending local food events and festivals offers a means for tourists to meet local people who have a similar interest in local foods. In addition, offering fresh locally grown foods, which have not travelled great distances, may satisfy the health concern of the tourists. As expected in all research, several limitations were found and should be addressed to encourage more effective research in the future. The primary drawback of this study is its generalisability. Even though data collection was performed in different destinations, the resultant measurement scale may be limited to the British population only. Research with samples from other populations, and replications would enable the conclusions to be validated in other cultural groups and give evidence of generalisability. Thus, further testing of the measurement scale developed in this study is necessary to examine if it is applicable to other regions. Although this study attempted to cover all aspect of tourists’ motivations to consume local food and beverages by examining the literature and by conducting a broad range of research, it is recognised that some aspects of motivations to consume local food and beverages may have been overlooked. Therefore, in future research, researchers of tourist local food experiences should reveal new information about motivations to consume local food at destinations by reviewing many research areas (e.g., tourism, hospitality, food, marketing, psychology, sociology, etc). Continued refinement of the measurement scale proposed and supported in this study is certainly possible with further research. Moreover, such investigations and modifications could include the addition and/or deletion of items, or even a modification of the factor structure if so indicated. These will have to be incorporated into the scale to ensure a valid measure of factors affecting consumption of local food on holidays and trips on a continuing basis. Additionally, it would be interesting to analyse the effect of different factors, constructs or scales on local food consumption of tourists in future research.